Over the years, I’ve been asked on several podcasts. But, fearing public speaking (especially answering questions off-the-cuff), I’ve always either turned them down or worked out an alternative arrangement, such as a written interview instead. So, when New York Times best-selling author, James Bradley, asked me to be a guest on his Untold Pacific Podcast, I naturally declined. James, however, politely refused to let me wriggle out of it.

*Read on for more context about James & the podcast, or click the image below to go straight to the podcast episode or listen to it here: 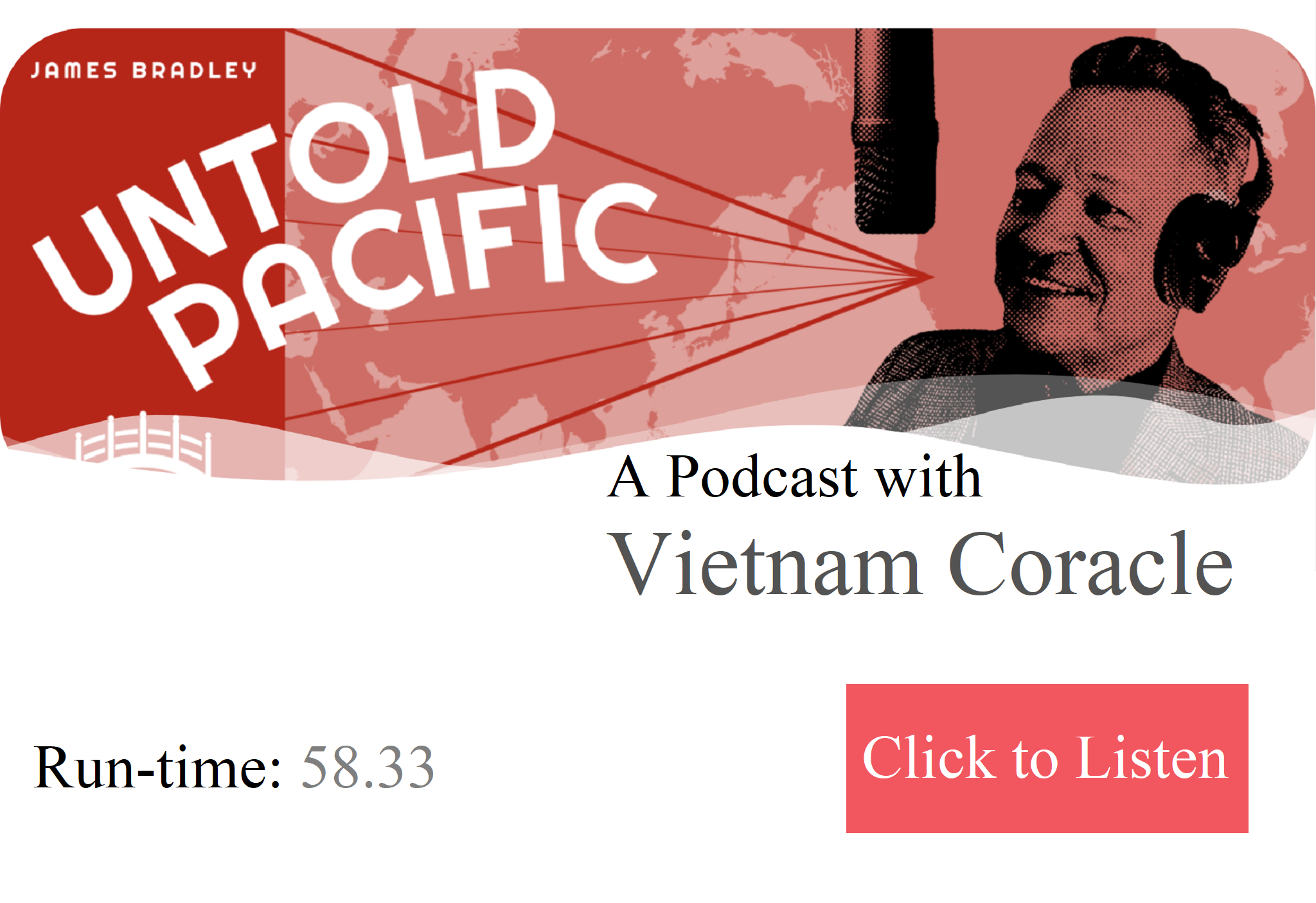 How James & I Know Each Other:

James and I first met in May, 2018, on the island of Con Son, in the Con Dao Archipelago. I was on a research trip to update my guide to the Con Dao Islands, while James, who’d been living on Con Son for months, was attempting to finish a book about Vietnam that he’d spent much of the last decade researching. James was renting a small but handsome old villa on the seafront promenade which, in colonial times, had been the French prison doctor’s house. In Con Son town, under giant, century-old Malabar almond trees, a stone’s throw from the ocean, James and I got to know each other over delicious home-cooked seafood dinners on the patio of his villa and, occasionally, cocktails at Infiniti Cafe. I was stuck on the island for an extra week, because the winds were too high for boats to sail back to the mainland, so James and I had plenty of time to talk.

When I returned home to Saigon (Ho Chi Minh City), we stayed in touch until James, too, left the island and came to live in Saigon for a couple of years. During this time we continued our friendship, meeting every couple of weeks for a meal, drink and conversation. Not long before Covid-19 broke in Vietnam, James moved to the Bay of Plenty, on North Island, in New Zealand, where he’s been producing episodes and interviews for his Untold Pacific Podcast ever since. 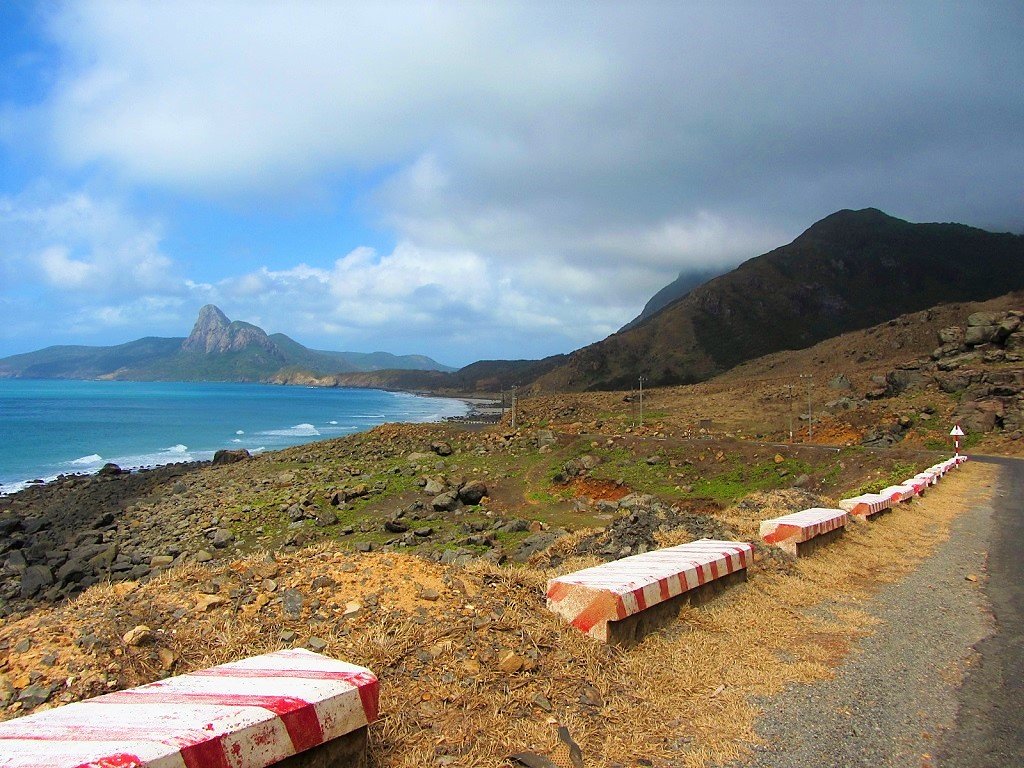 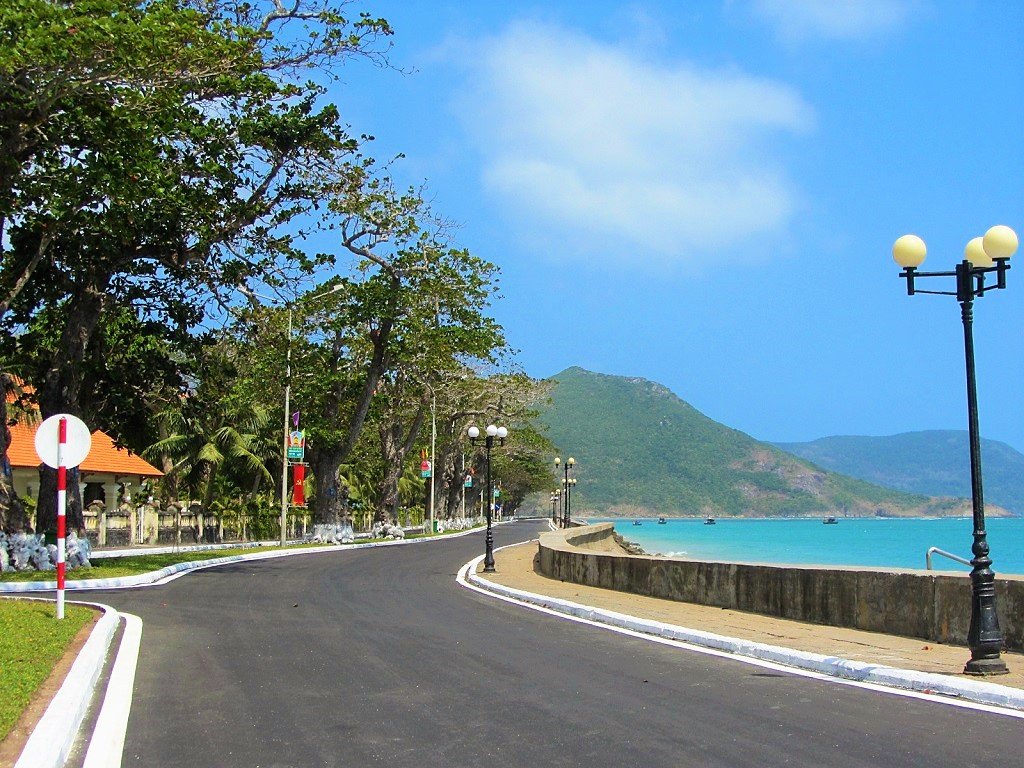 The seafront road in Con Son town: James’ villa is just to the left of the image

James Bradley is the author of four non-fiction books, three of which are New York Times best-sellers, all focusing on different aspects of the relationship between the United States and the Asia-Pacific region. James’ first book, ‘Flags of Our Fathers’ (2000), explores the complex story behind the iconic image of the raising of the flag on Iwo Jima, and was subsequently made into a movie, directed by Clint Eastwood, in 2006. Similarly, James’ Untold Pacific Podcast covers a variety of topics, but with a primary focus on his life’s work: the history of U.S-Asia relations. The podcast includes episodes about James’ life and experiences from 40 years of living, studying, travelling and working in Asia, as well as extracts from his books, interviews and in-depth discussions with a range of interesting people, most of whom James has cultivated friendships with during his travels and research for his books. (Indeed, I have no place among his former podcast guests, all of whom are established authorities on extremely complex and, sometimes, sensitive subjects). 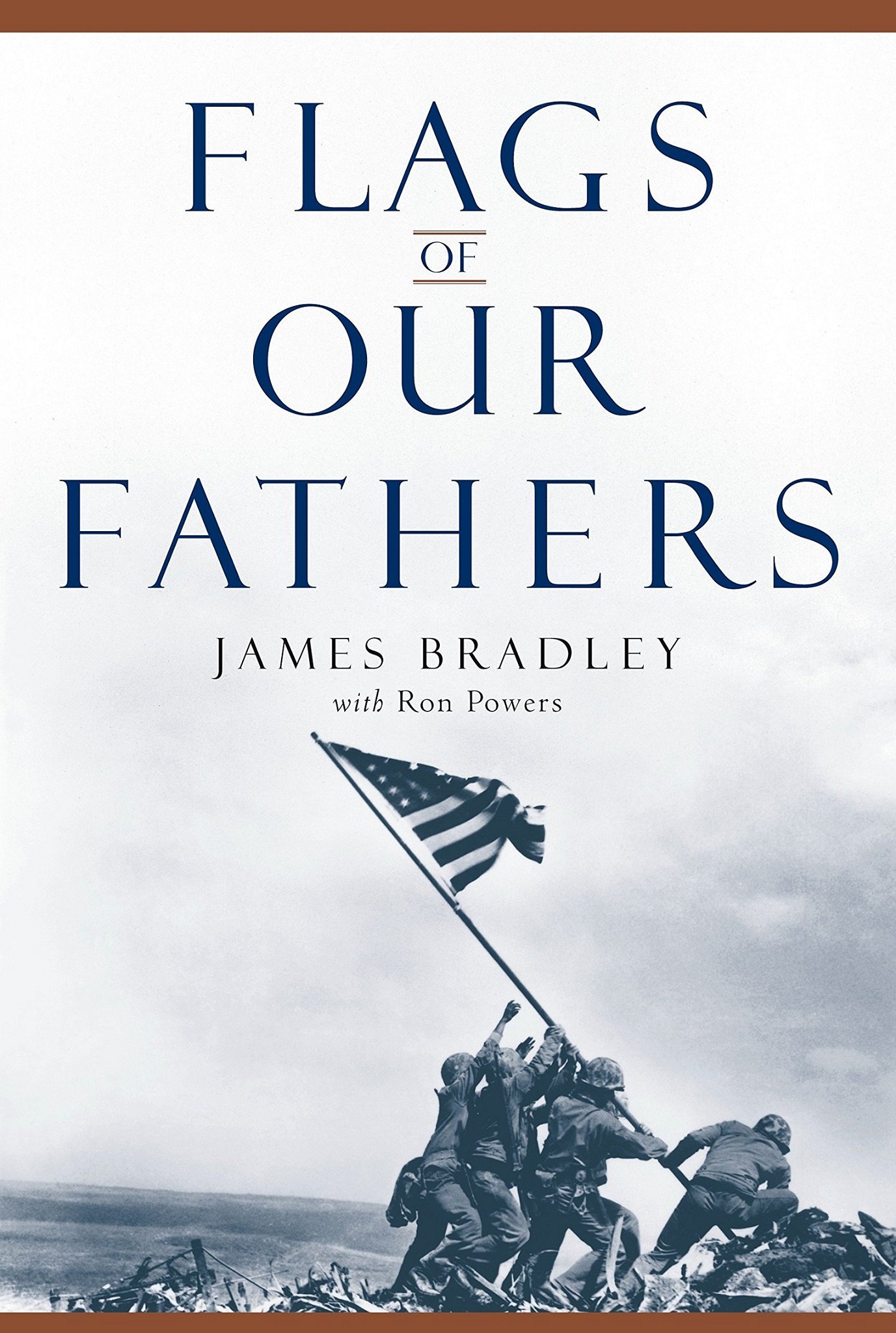 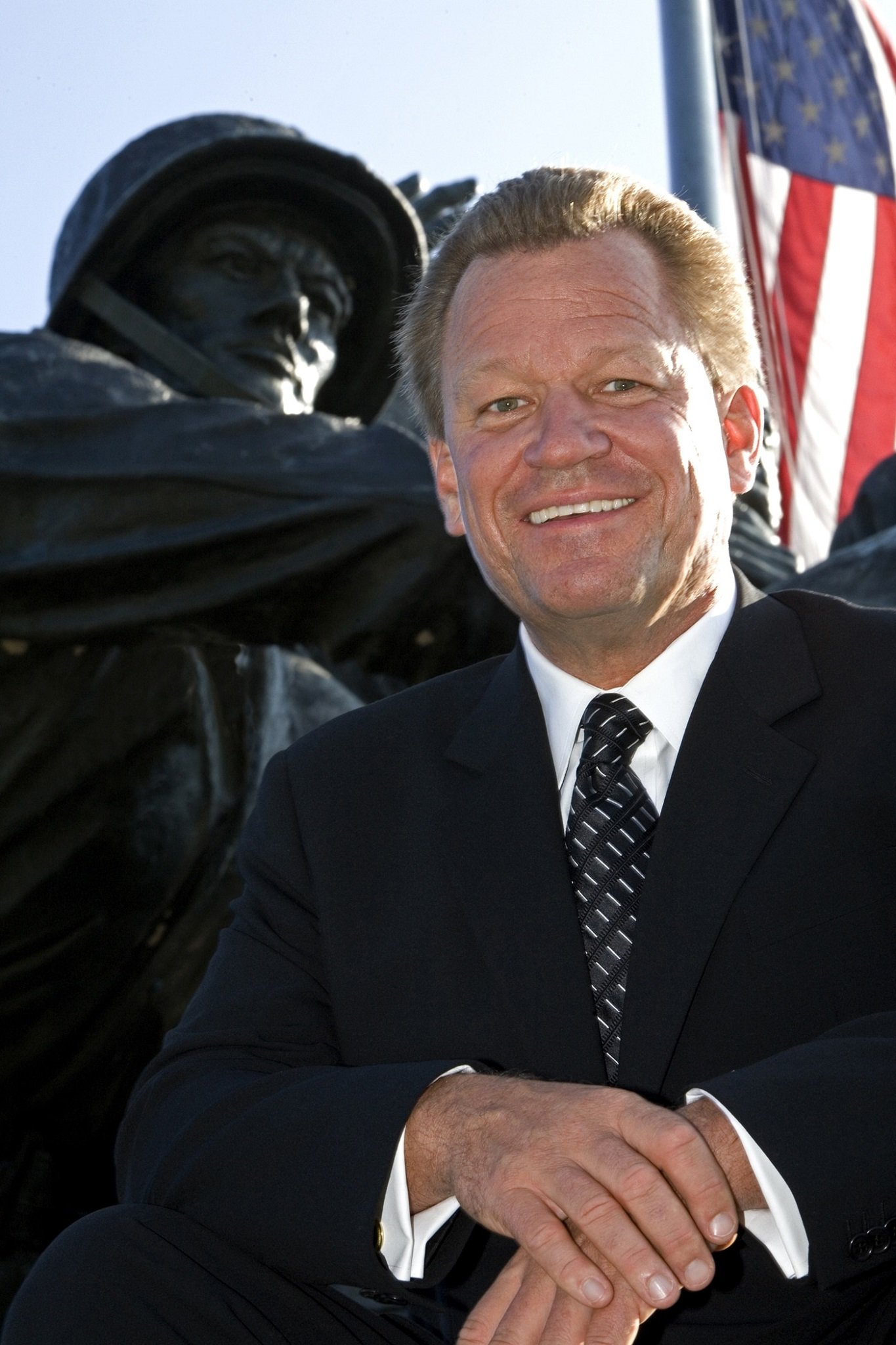 About this Episode of the Podcast:

Due to a recurring injury – the result of a life of travel, sport, and writing – James was unable to finish his book on Vietnam: to write was too painful and potentially dangerous for his long-term health. However, instead of writing and publishing about Vietnam, James will use his extensive research for the book to produce a series of podcast episodes, which will be released over the coming months on Untold Pacific. This is where I come in. Much of James’ research on Vietnam concerns the war years and the past. By interviewing me about my website and experience living in Vietnam over the last decade, James hopes to provide his listeners with a present-day context for the country. In general, my website explores a peaceful Vietnam, enjoying a period of growth and prosperity, with a young and optimistic population; which is in stark contrast to the war-torn Vietnam that James spent years researching for his book. In the podcast, James and I discuss several aspects of present-day Vietnam, such as the nation’s food culture, what it’s like as a travel destination, and what we think the future may hold for the country, as well as some questions about my website and how I came to live and work in Vietnam.

This is my first podcast, so I apologize for any shortcomings. One reason I generally prefer the written word over the spoken, is that writing is usually more precise and considered than speech. When I write, I can go back and edit until I’m happy with the result. When I speak, I’m trying to edit myself in real-time, and the results are not always an accurate expression of my thoughts, opinions and experiences. To this end, I find myself scared of saying something I don’t actually mean or believe, just to fill a silence. The alternative is to um and ah while collecting your thoughts (which, indeed, I do a lot of in this podcast). Another issue with the spoken word is the automatic judgments and assumptions that we are all liable to make upon hearing a person’s voice: the accent, delivery, and intonation will inform us as to whether we trust, like, or agree with the person. With speech, we’re much more likely to listen to the voice rather than the words. Fortunately for me, James is an experienced public speaker, and he was good enough to make me feel comfortable and at ease during the podcast. James gives me far too generous an introduction, for which I’m both grateful for and embarrassed by. Click the image below to go to the podcast episode or listen to it here:

Disclosure: I never receive payment for anything I write or produce: my content is always free & independent. I gave this podcast interview for free: I wanted the chance to discuss Vietnam & my website with James Bradley on his Untold Pacific podcast & share it with my audience. I did not receive payment of any kind for this interview, nor I am affiliated with the Untold Pacific podcast in any way. For more details, see my Disclosure & Disclaimer statements here

An Interview with Vietnam Coracle

A written interview featuring long-form, detailed answers to questions ranging from the evolution of Vietnam Coracle to its purpose and function, and the nature of travel writing in the Internet age…

A categorized reading list including personal reviews of over 50 books about Vietnam, ranging from Vietnamese authors in translation to travel writing, journalism, history, poetry, politics & more…

To provide an opportunity for vicarious travel during this time of self-isolation & travel bans, I’ve republished my film, route map & diary of a two-month road trip across Vietnam…

Vietnam Weather Guide: When & Where to Go

Weather is an important consideration when planning a trip to Vietnam. Here’s a month-by-month guide to weather conditions across the nation, including recommendations of where to go (and where to avoid) at different times of year…

23 of the Best Beaches in Southern & Central Vietnam

With a coastline of over 3,200km & thousands of islands lying offshore, Vietnam is a great beach destination. Blue bays, hidden coves, white sands, swaying palms & dramatic cliffs, Vietnam has it all….

The Con Dao Islands: A Guide