Vung Tau | City by the Sea

For over a century, Vung Tau was the traditional (and easiest) beach retreat for Saigon residents and expatriates. In the last 10-20 years, however, Vung Tau has been shunned in favour of the ‘better’ beaches of Mui Ne and Phu Quoc which, thanks to improved roads and domestic air routes, are easier and quicker to get to than in the past. In addition, Vung Tau’s star began to wane because of increasing pollution on its beaches and a reputation for seediness. However, in the last five years or so, while vacationers have been focusing their attention on other beach towns, Vung Tau has undergone a remarkable transformation. The city is now handsome, clean and livable, with excellent coast roads, fabulous sea views, fast transport connections, a good food scene, and clean (if not spectacular) beaches. I had the good fortune to spend six weeks in Vung Tau during Vietnam’s first nationwide lock-down, in April 2020. I grew very fond and attached to the town, the sea-views, the architecture, the food, the people and the general atmosphere and position of this city by the sea. 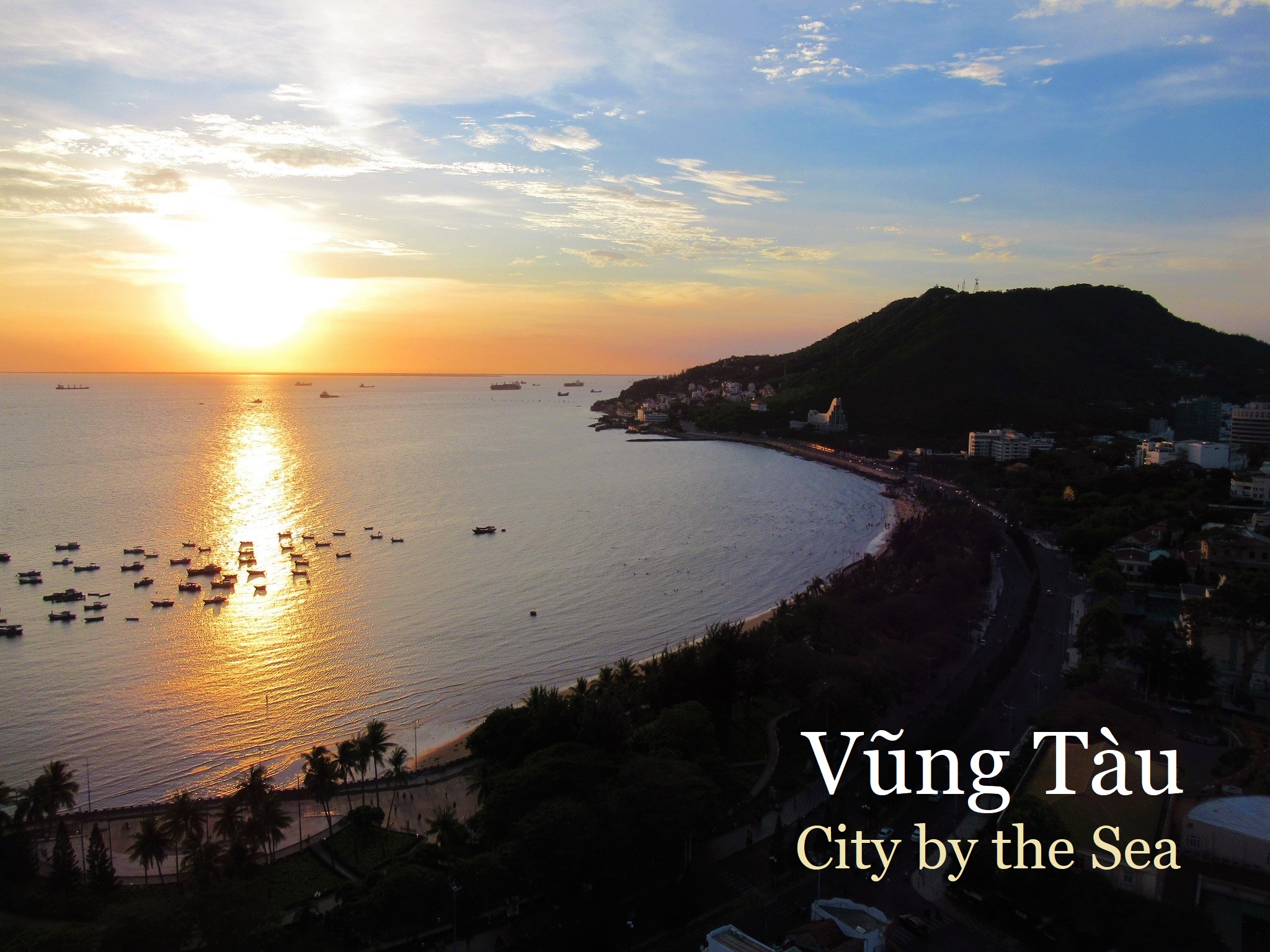 VUNG TAU | CITY BY THE SEA

What follows is a sort of illustrated travelogue-cum-guide to Vung Tau taken from extracts of my lock-down piece, which I hope is evocative enough to inspire a trip there when travel restrictions are lifted. In terms of practical information – such as food, transportation, places to visit, places to stay, things to see and do – I’ve marked many of these on my map and linked to all my Vung Tau guides in the Related Posts. When I was staying in Vung Tau in April 2020, the city had no confirmed Covid-19 cases: it was a ‘clean’ province. Unfortunately, things have changed since then. Vietnam’s fourth (and worst) wave of the pandemic has seen cases rise in Vung Tau to the extent that the city has endured a particularly severe lock-down. I find myself thinking back to my extended stay in Vung Tau and missing it. Although not as trendy as Danang nor as popular as Nha Trang – and the beaches not as good as either – somehow Vung Tau has a strong hold over me.

Vũng Tàu | City by the Sea

*Please Support Vietnam Coracle: I never receive payment for anything I write: all my content is free to read & independently financed. There’s no sponsored content whatsoever. If you like this guide to Vung Tau, please consider supporting the work I do. See my Support Page for details. Thank you, Tom 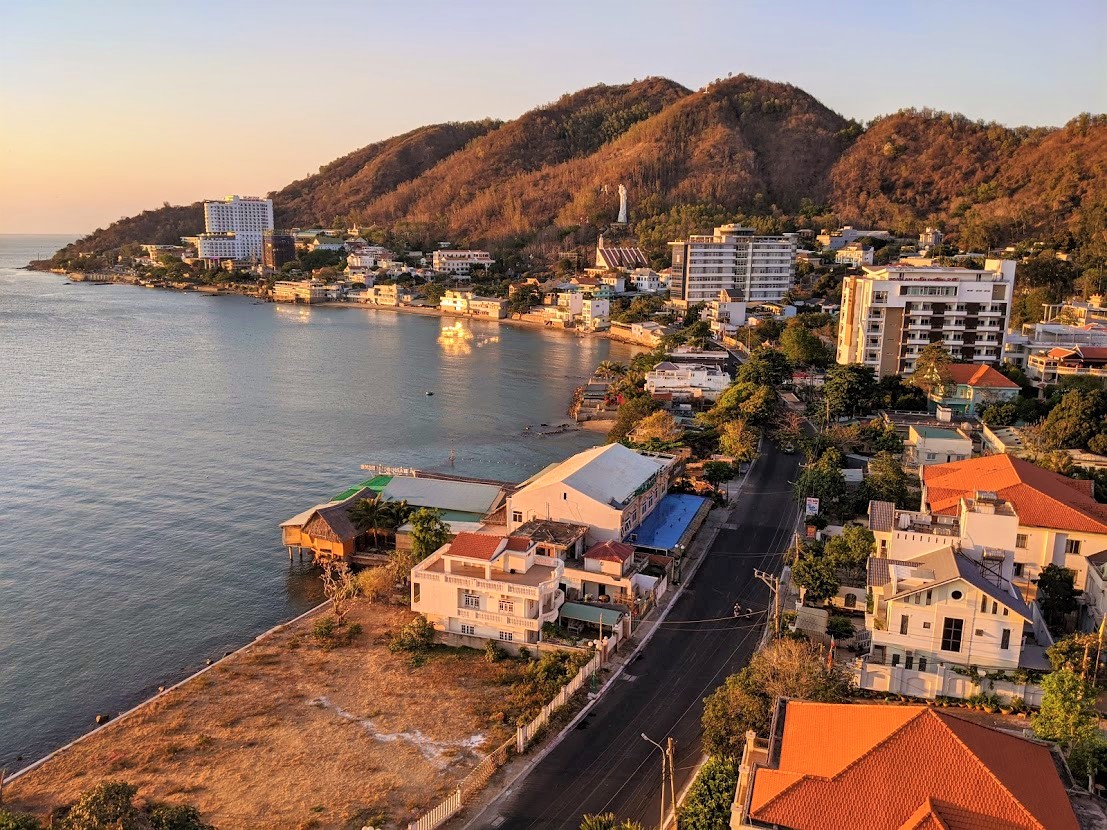 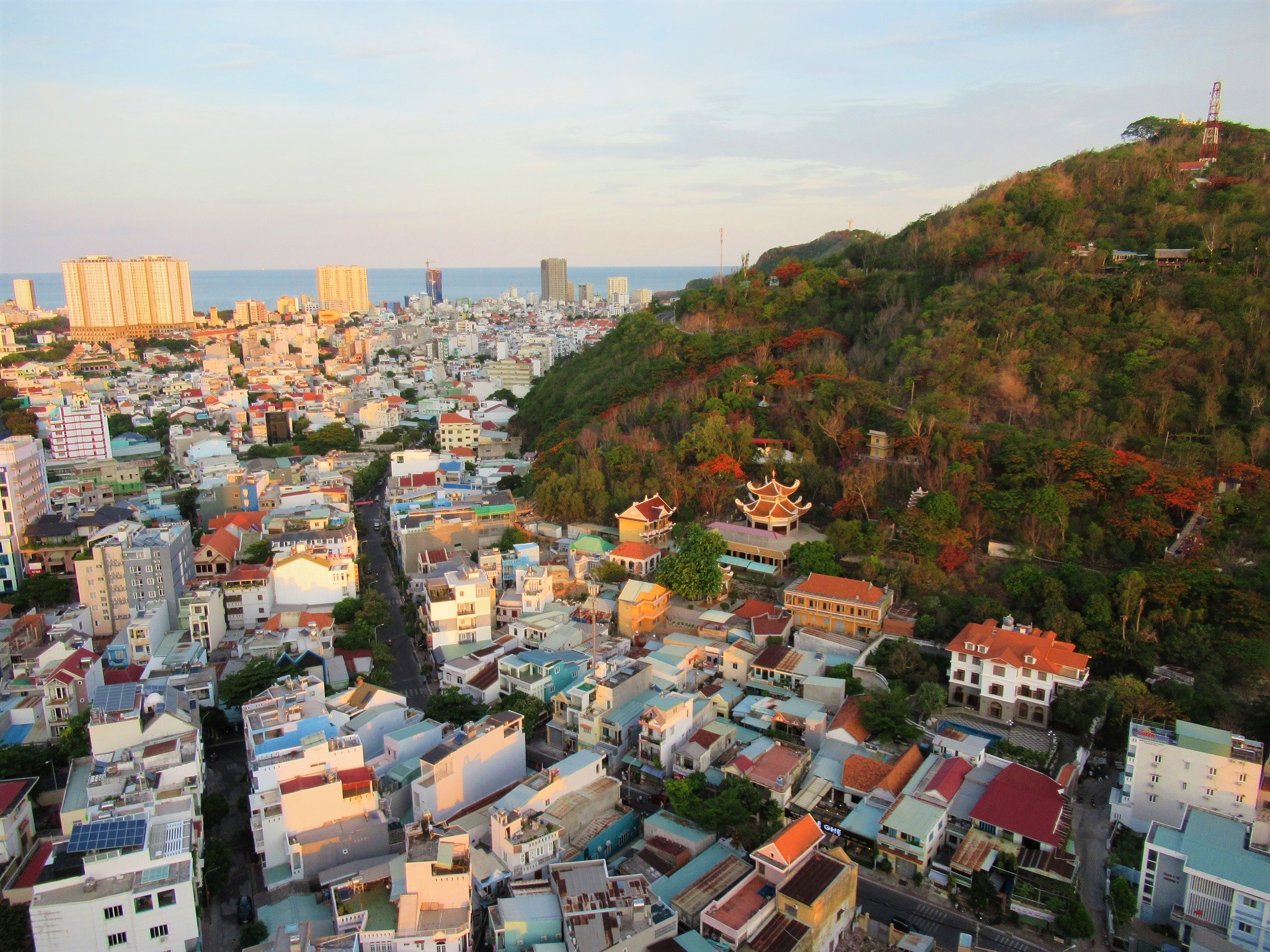 Ride into Vung Tau on the wide, breezy seafront road on a weekday and the city will appear to be empty. Vung Tau is a weekend economy: from Friday evening until Sunday afternoon the hotels, beaches and bars open for business and the punters pour in from Saigon to let their hair down. But, during the week, the city is quiet, tidy, handsome, neat and attractive. If you roll into town in the early afternoon from Monday to Thursday, the city is calm and quiet: waves lapping the beaches and embankments, the sun hitting the high-rise hotels and apartments, a sea-breeze cooling the air and shaking the leaves of trees, and tankers, freighters and rigs lining the horizon. During the week, Vung Tau feels safe, clean and comfortable. The city is convenient and spacious, with easy access to nature in the form of the ocean, the hills, the windy seafront boulevard and the peaceful hillside pagodas. There are cafes, lots of food and drink options, shops, malls, and a few ‘Western stores’ where you can buy things like British-style pies and French cheeses. 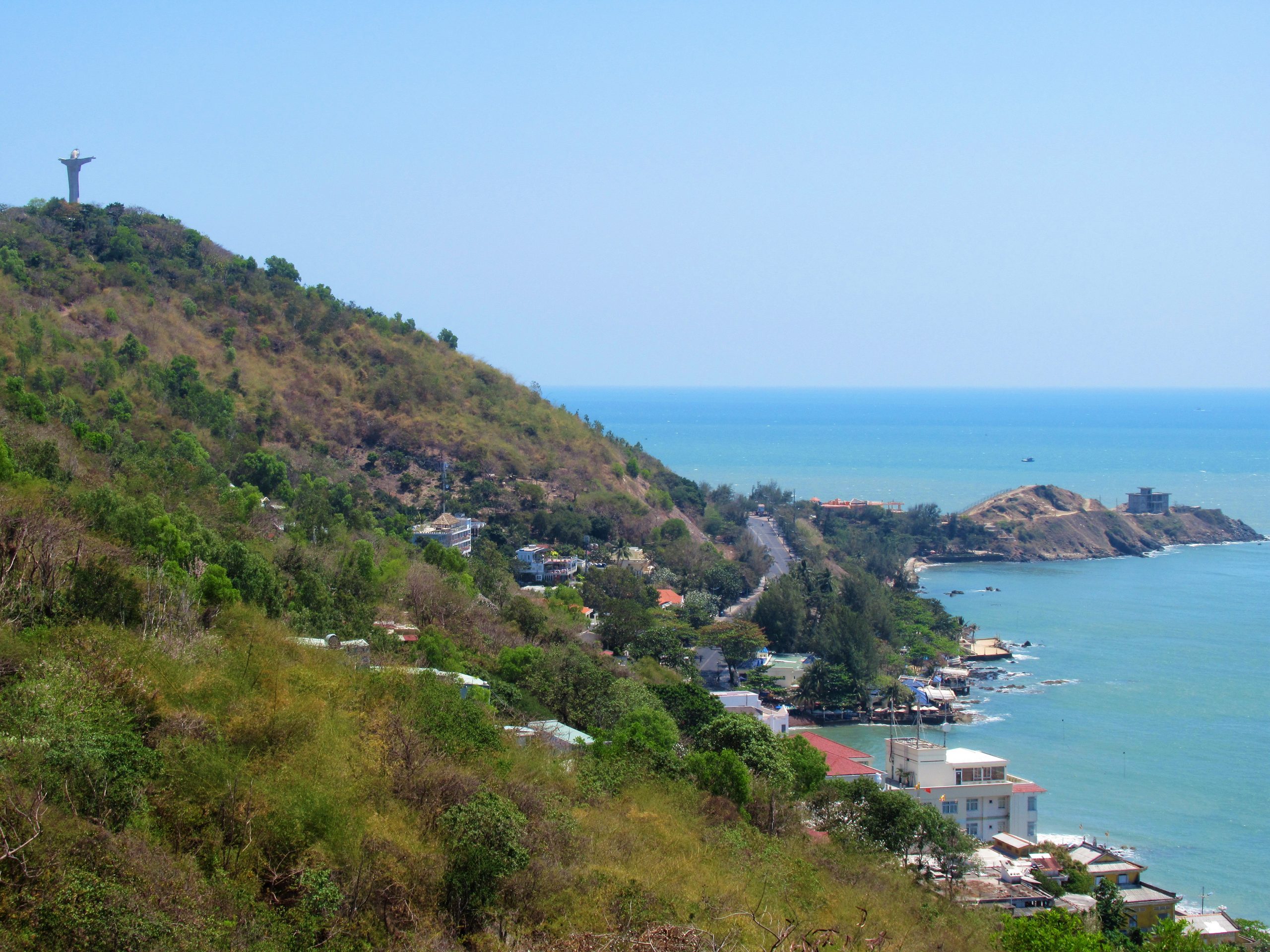 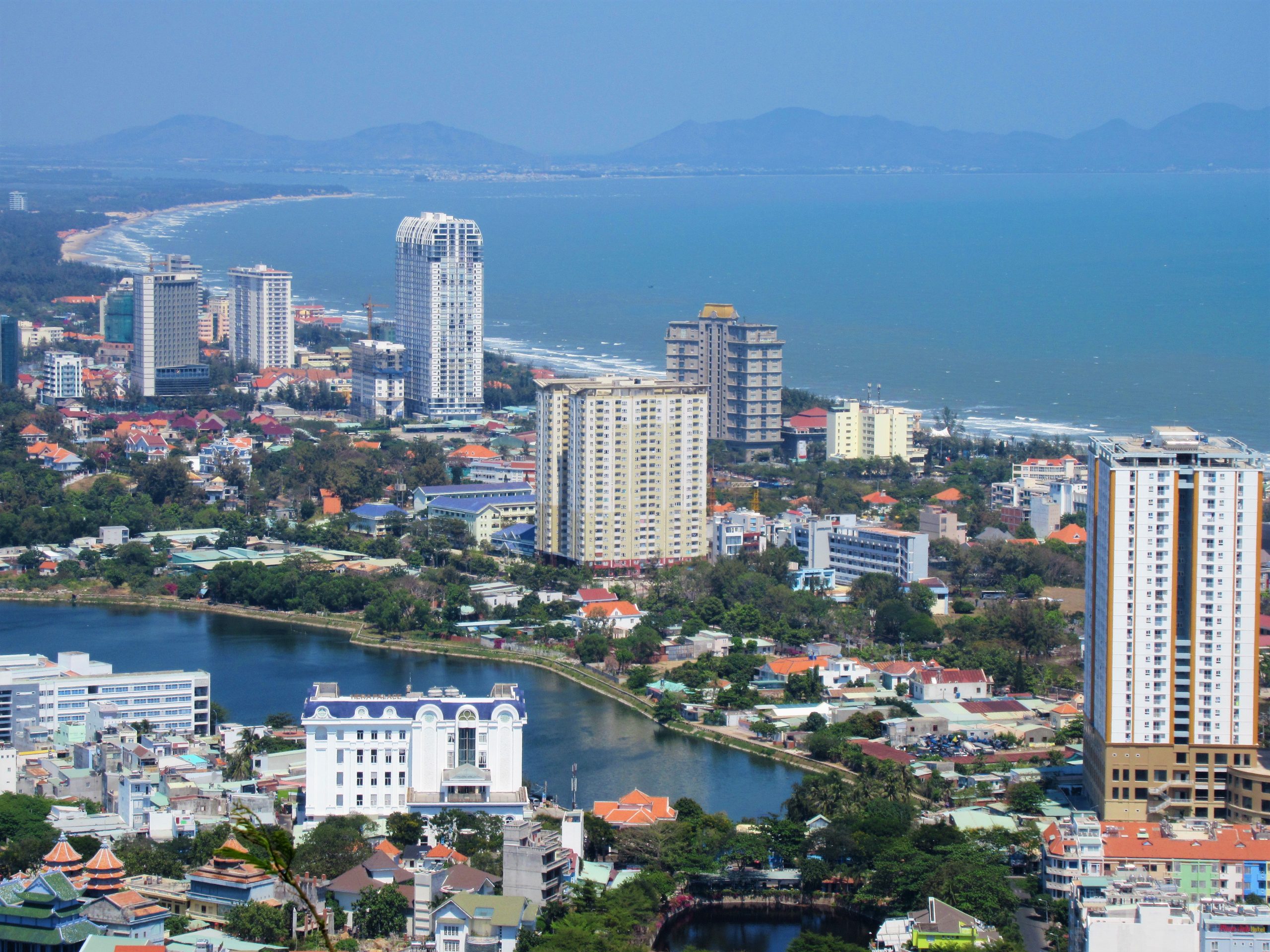 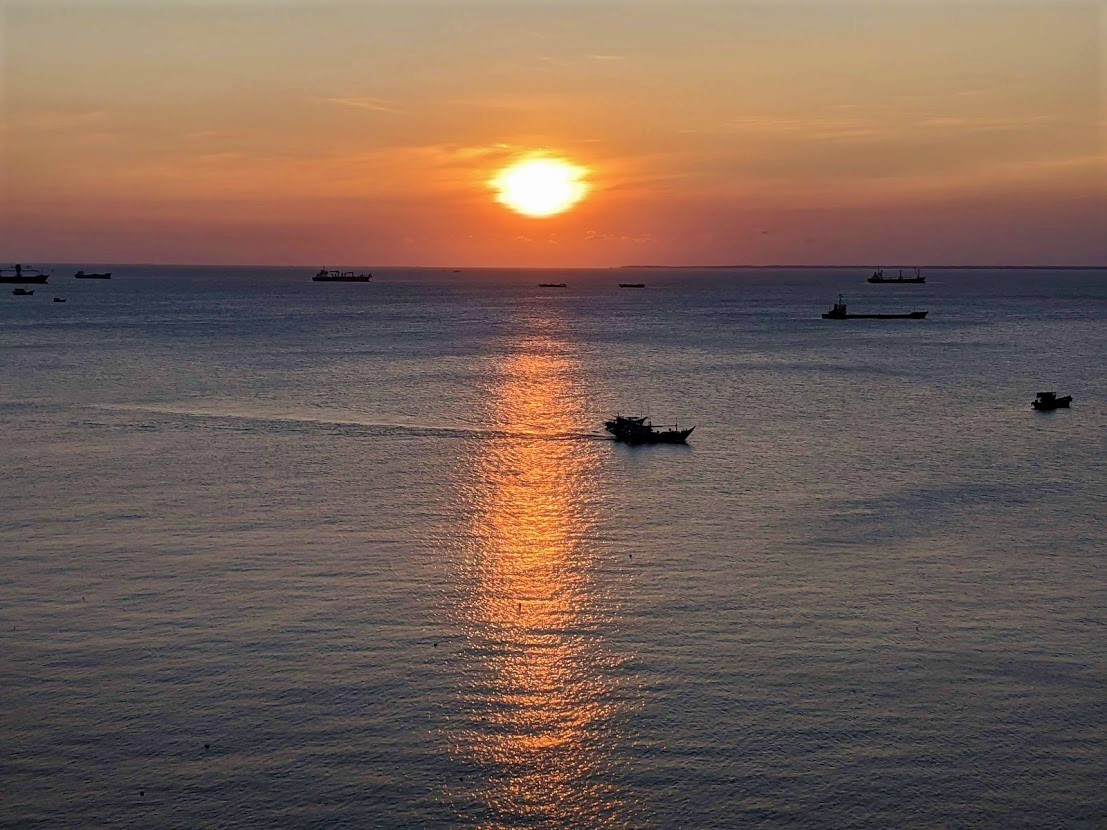 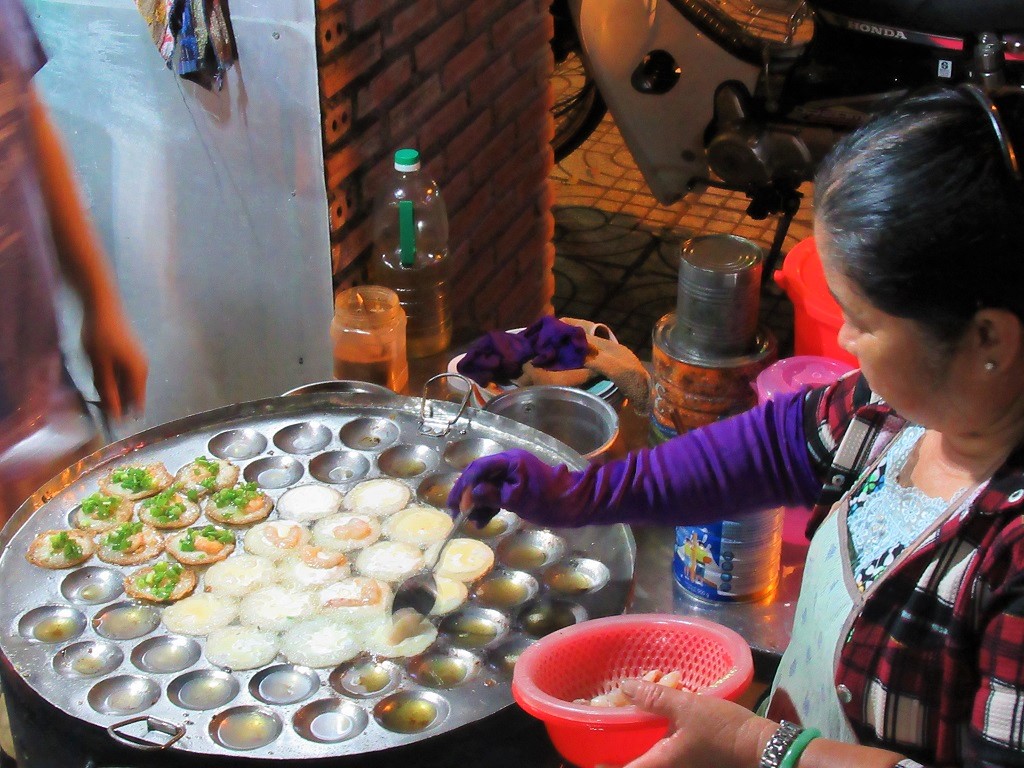 Vung Tau is a peninsula poking southwest into the East Sea, near the mouth of a complex river system. Only a hundred kilometres from Saigon and reachable by road in just 2 hours (or even less by fast boat or car ferry), Vung Tau has long been a popular weekend escape for city dwellers. But, when I first got to know it, between 2005-2010, Vung Tau was a trashy, noisy, crowded and polluted tourist town with a seedy underbelly and a boozy expat scene. There was a sense of vice about the place, which I’d rarely felt in other Vietnamese towns. In the last few years, however, the city has transformed itself and cleaned up its image. Vung Tau is now an attractive, well-organized, increasingly affluent and ‘respectable’ seaside city. This was my home for some 50 days during the first nationwide lock-down of the pandemic and I grew to love it. 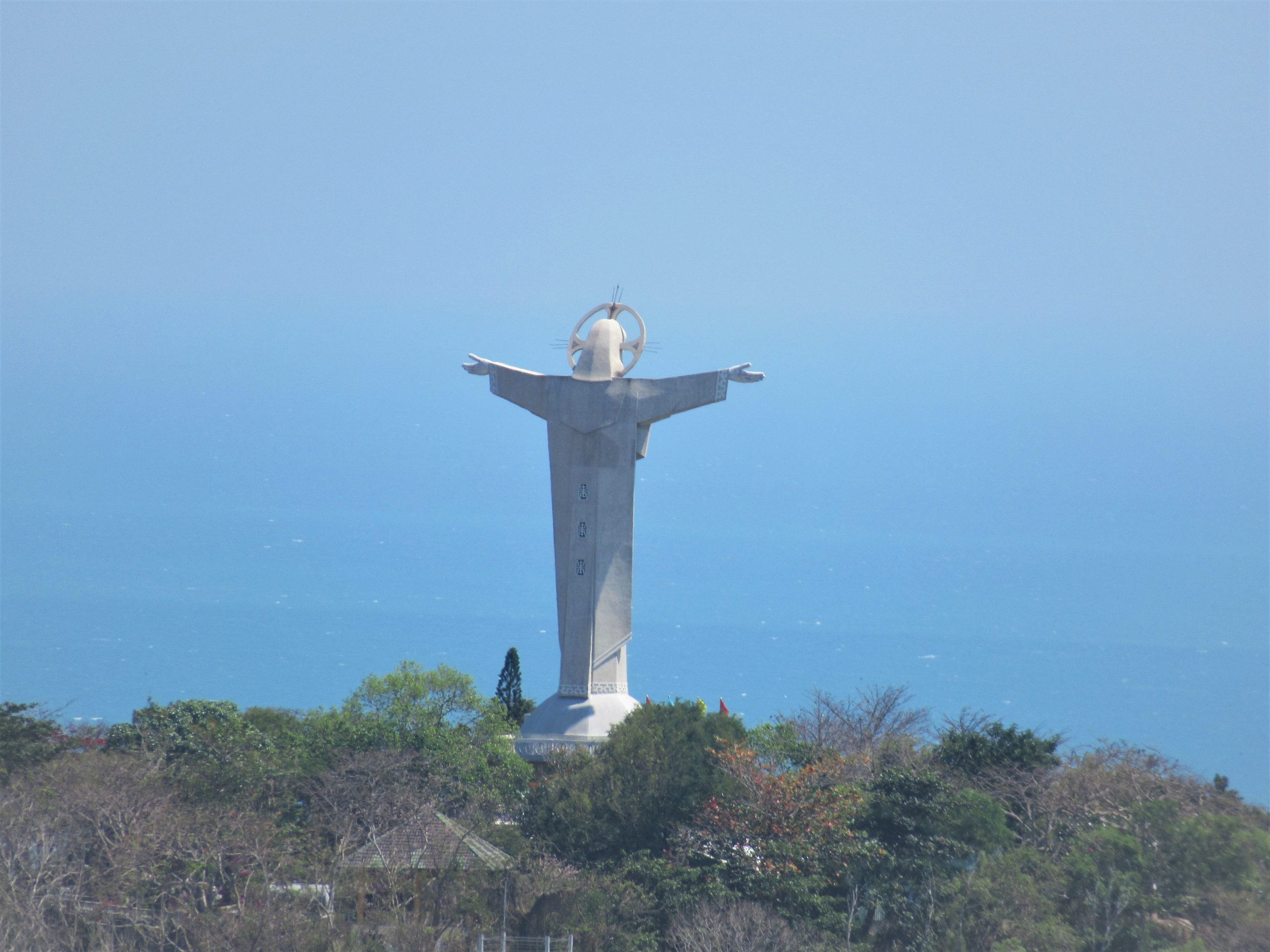 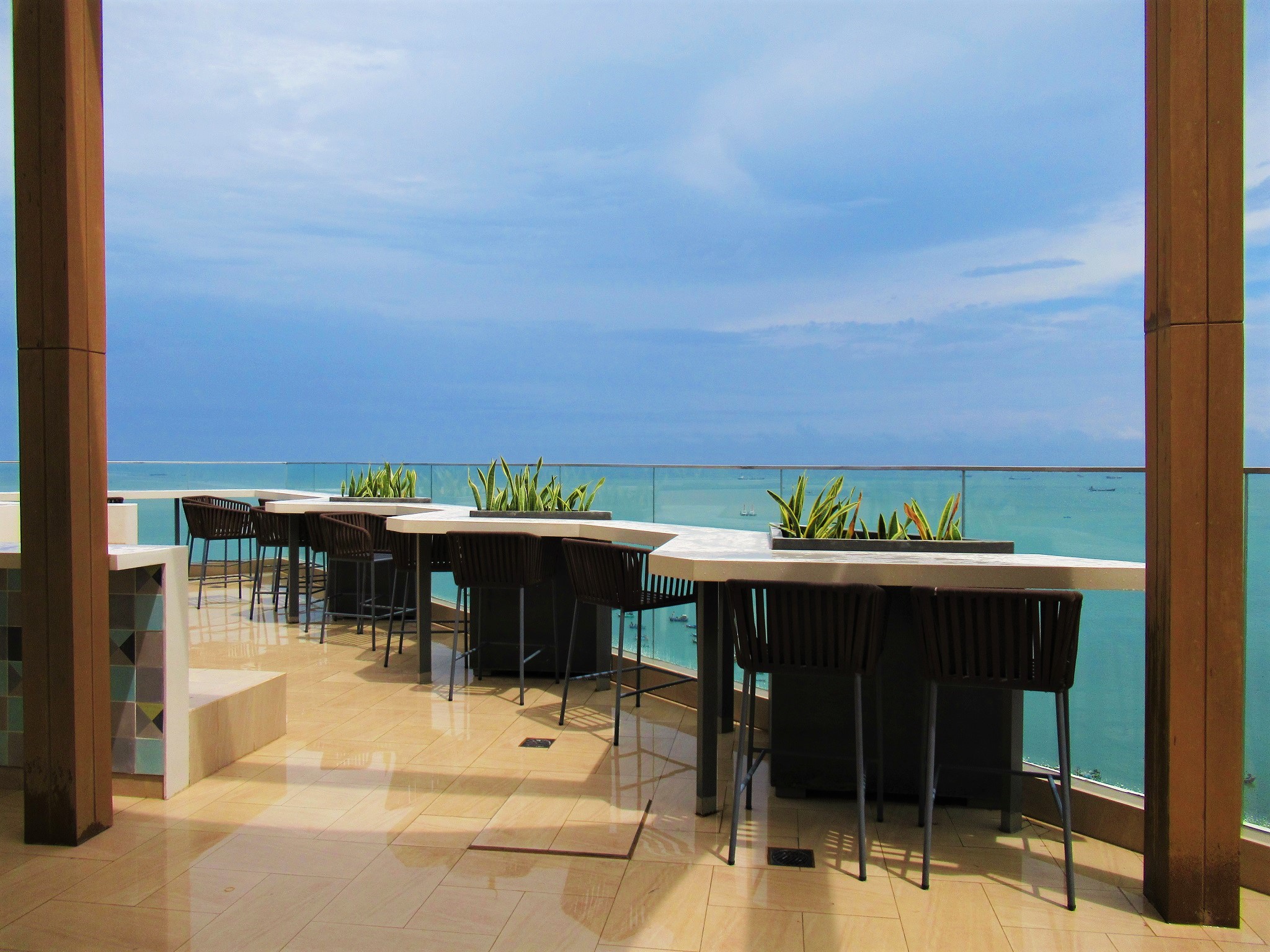 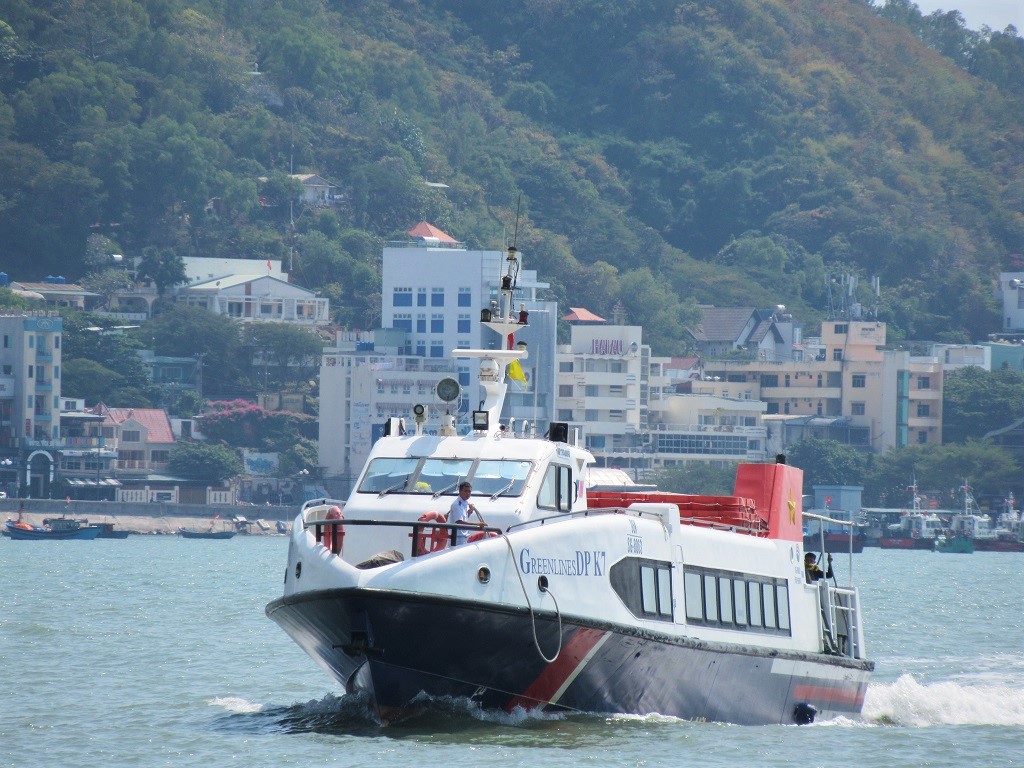 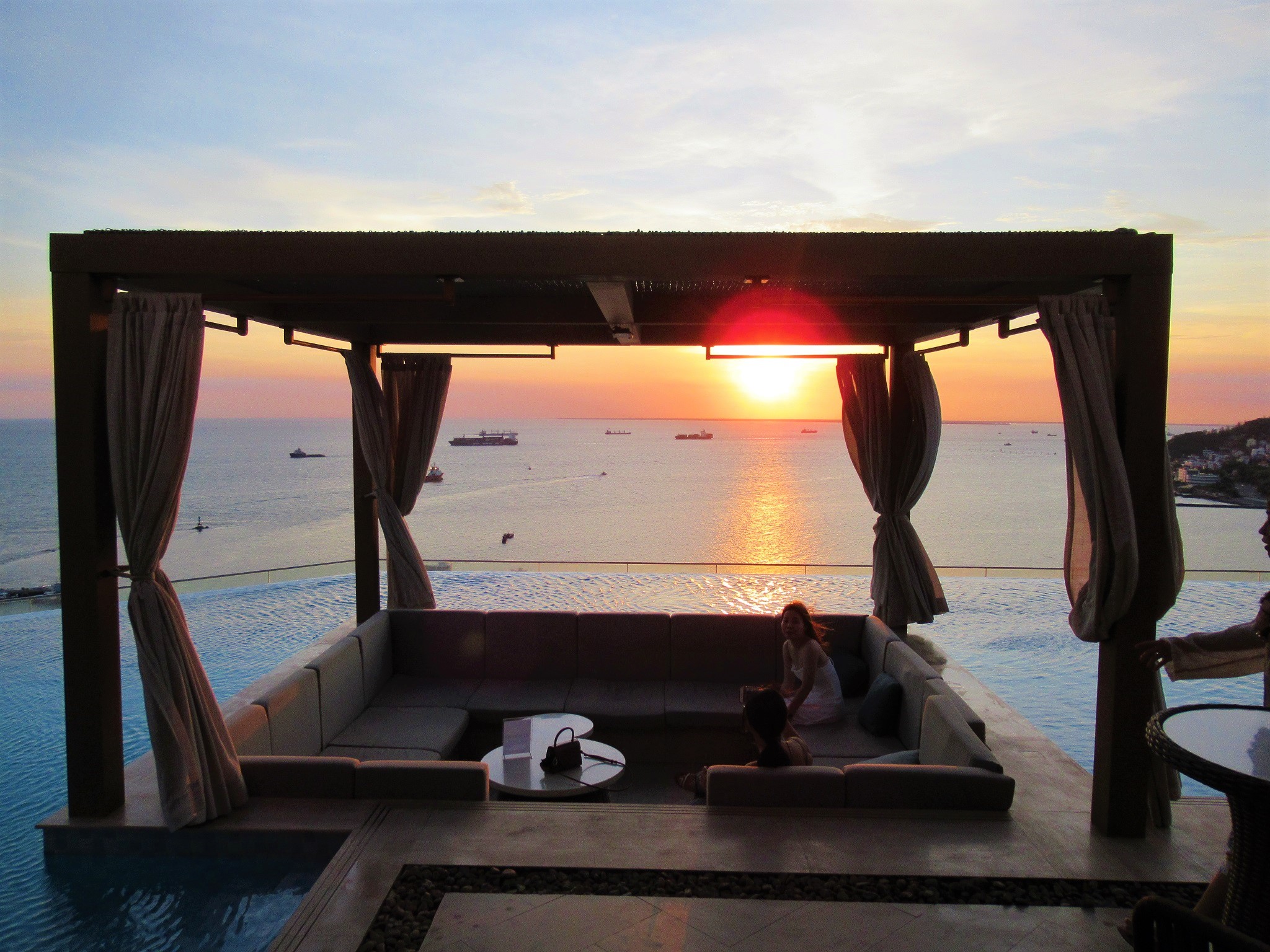 Like many coastal cities in Vietnam, Vung Tau is on the up-and-up. The city’s accommodation – from hotels and homestays to budget hostels and Airbnbs – gets better every year; its beaches are cleaner and the water quality clearer than at any other time since I’ve known it; street food is thriving and local seafood is fresh and delicious. On the hillsides, there are still some attractive century-old French-colonial villas and, dotting the city streets, interesting examples of Vietnamese Modernist architecture. People are friendly and noticeably healthy and active: the long, attractive seafront road with wide, well-maintained sidewalks is used every morning and evening by locals of all ages for promenading, cycling, running, dancing, calisthenics, football and swimming in the ocean. There’s an active cafe and bar scene, and, although the seediness still exists in the dozens of euphemistically named ‘massage’ parlours and ‘karaoke’ bars, these feel like relics of the past: old neighbourhoods awaiting demolition. 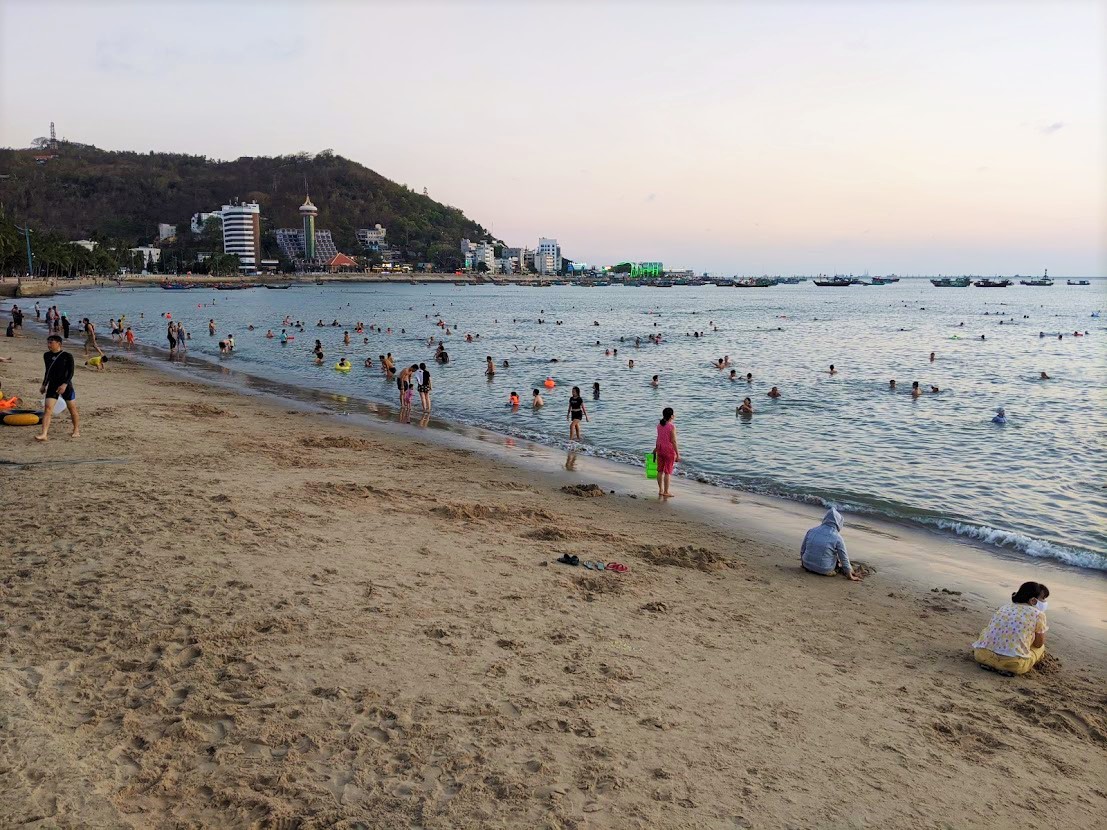 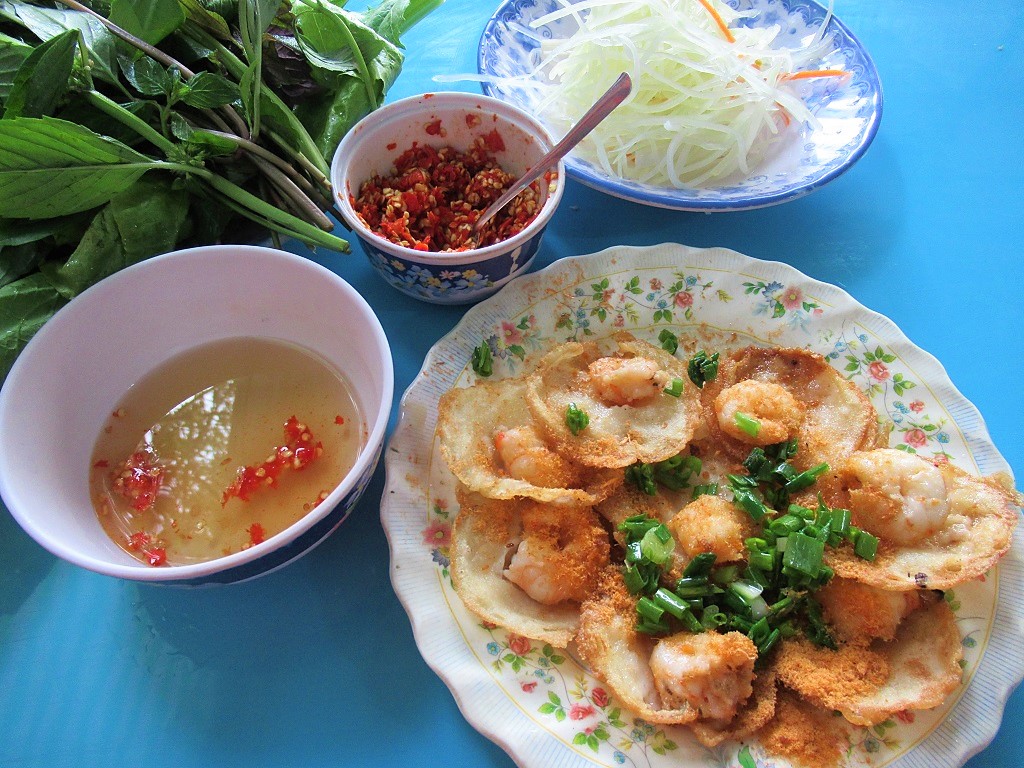 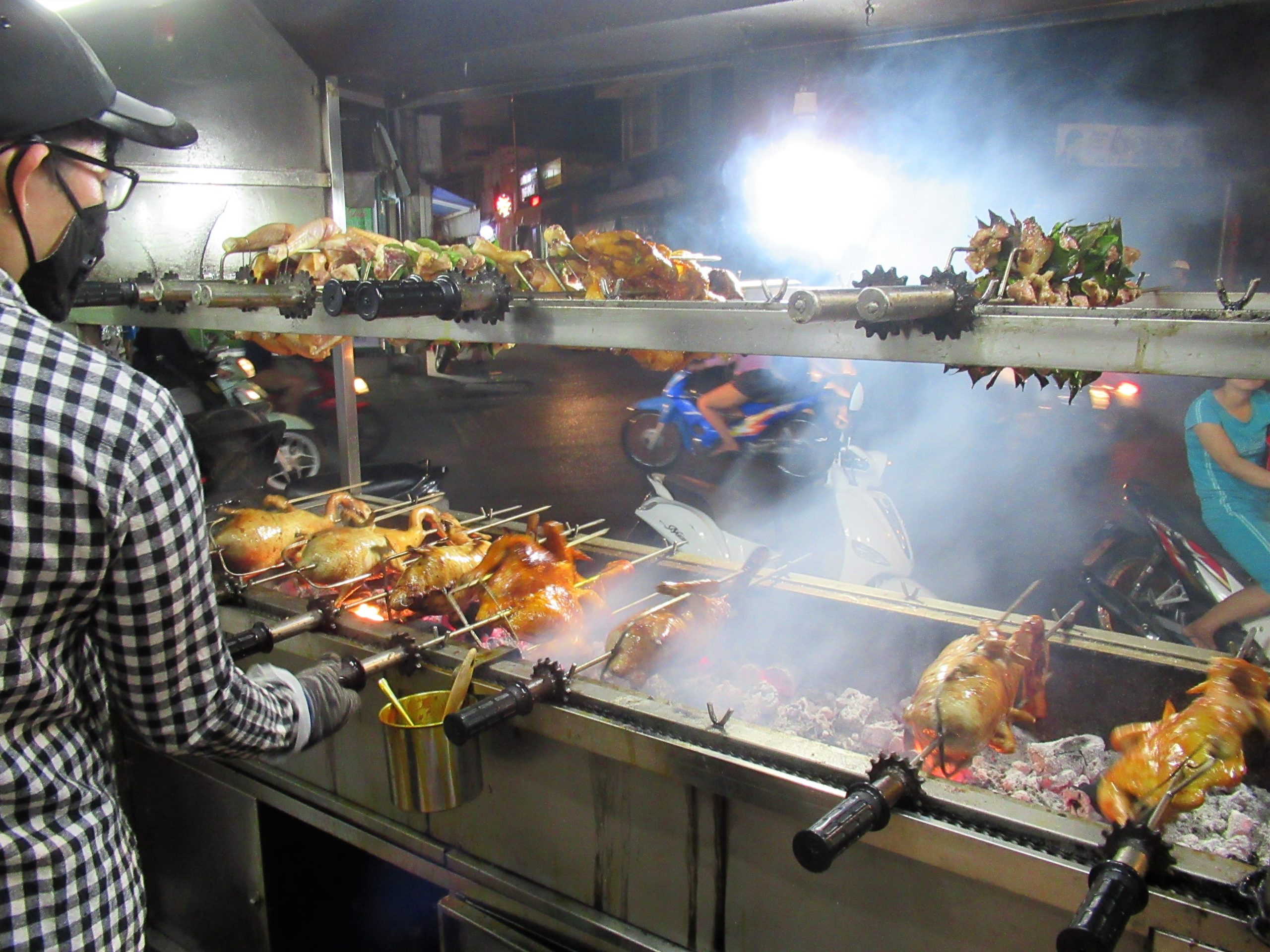 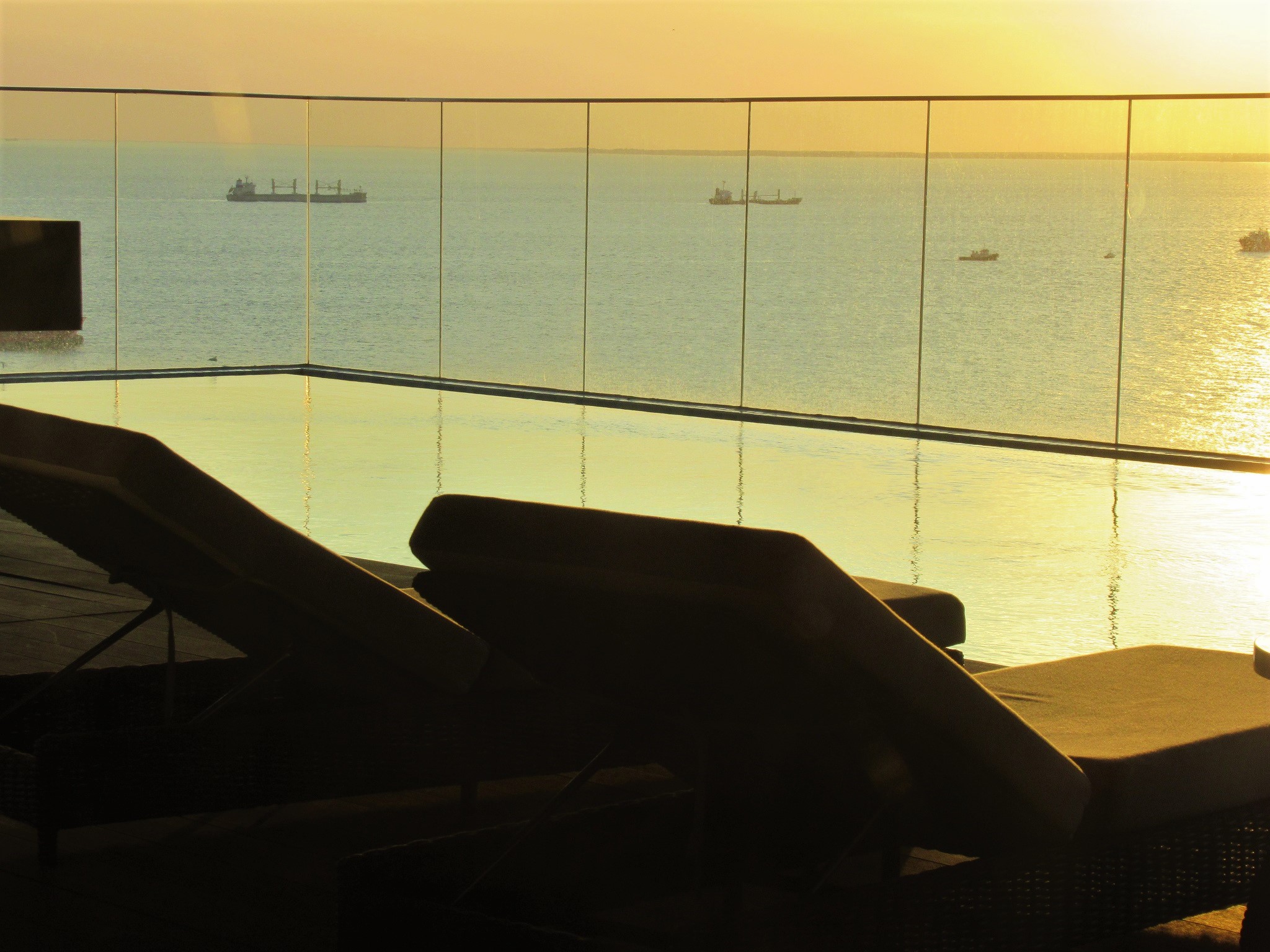 Many of Vung Tau’s streets are wide, leafy and handsome. The thick, grey, gnarly trunks of century-old trees lining the French colonial-era grid of streets behind Bãi Trước beach (whose roots run beneath the road surface, rupturing the smooth asphalt), look like elephant’s feet astride the boulevards. The ocean stretches to the horizon, criss-crossed day and night by shipping of all sizes: tankers, container ships, wooden fishing vessels, coast guards, rescue boats, and fast ferries to Saigon, Can Gio and the Con Dao Islands. On the horizon is a constant line of cargo ships in silhouette, with plumes of smoke billowing from their funnels streaking the sky in the direction of the prevailing wind, like vaporous windsocks. The seafront road wraps around the entire peninsula, offering views out across the bay and back to the marshlands, mangroves, shipping ports and factories due west toward the river mouth. 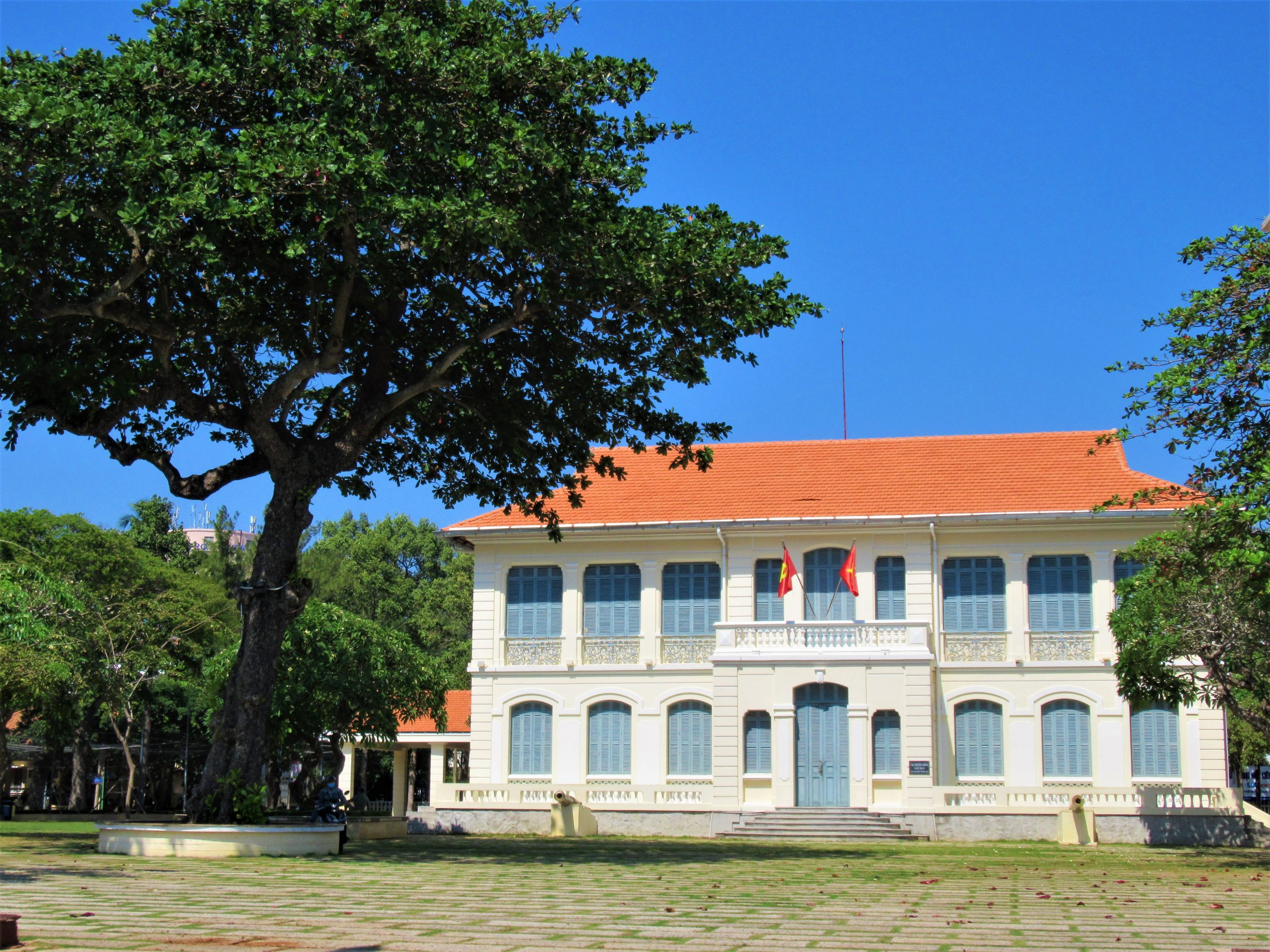 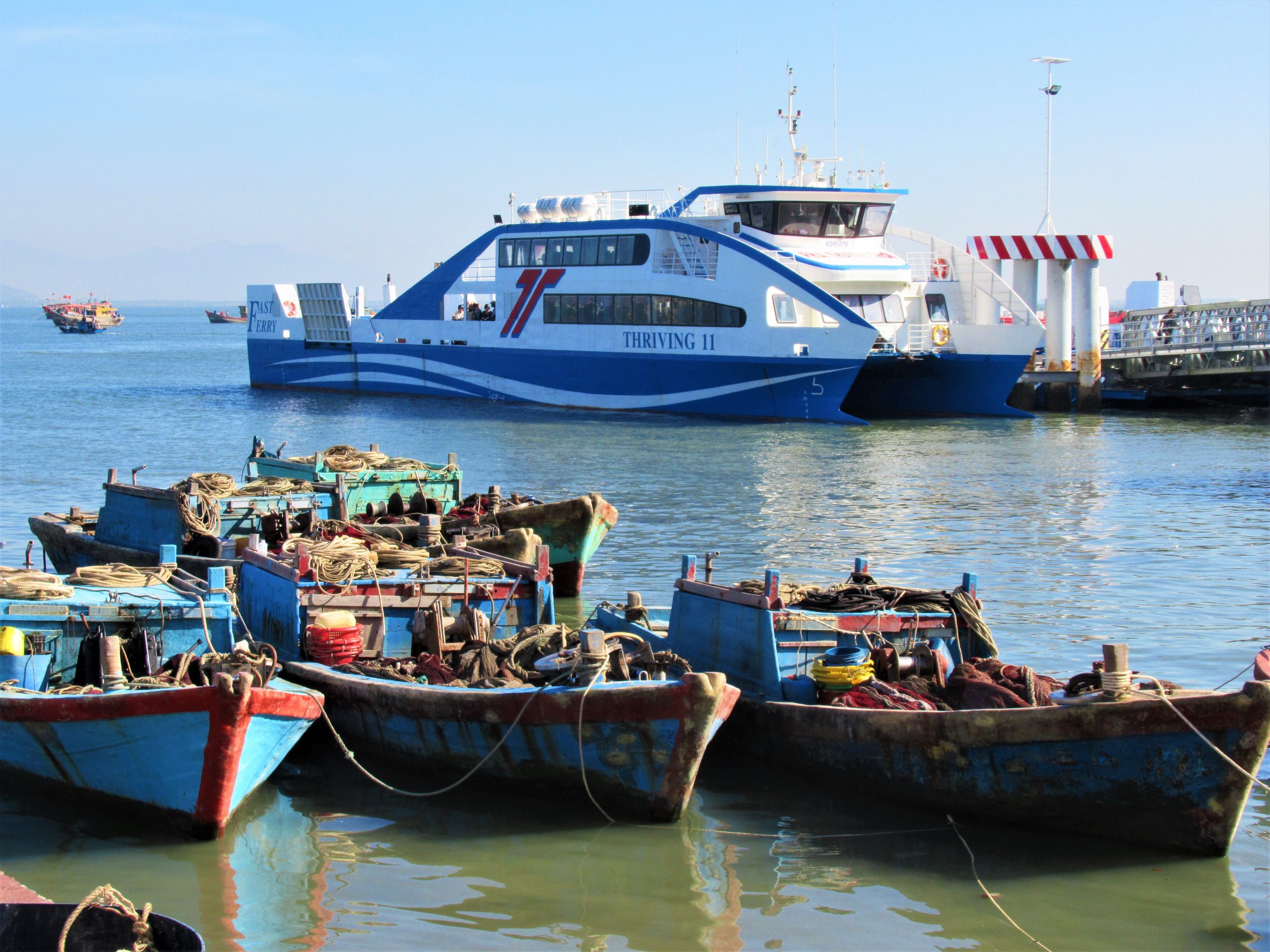 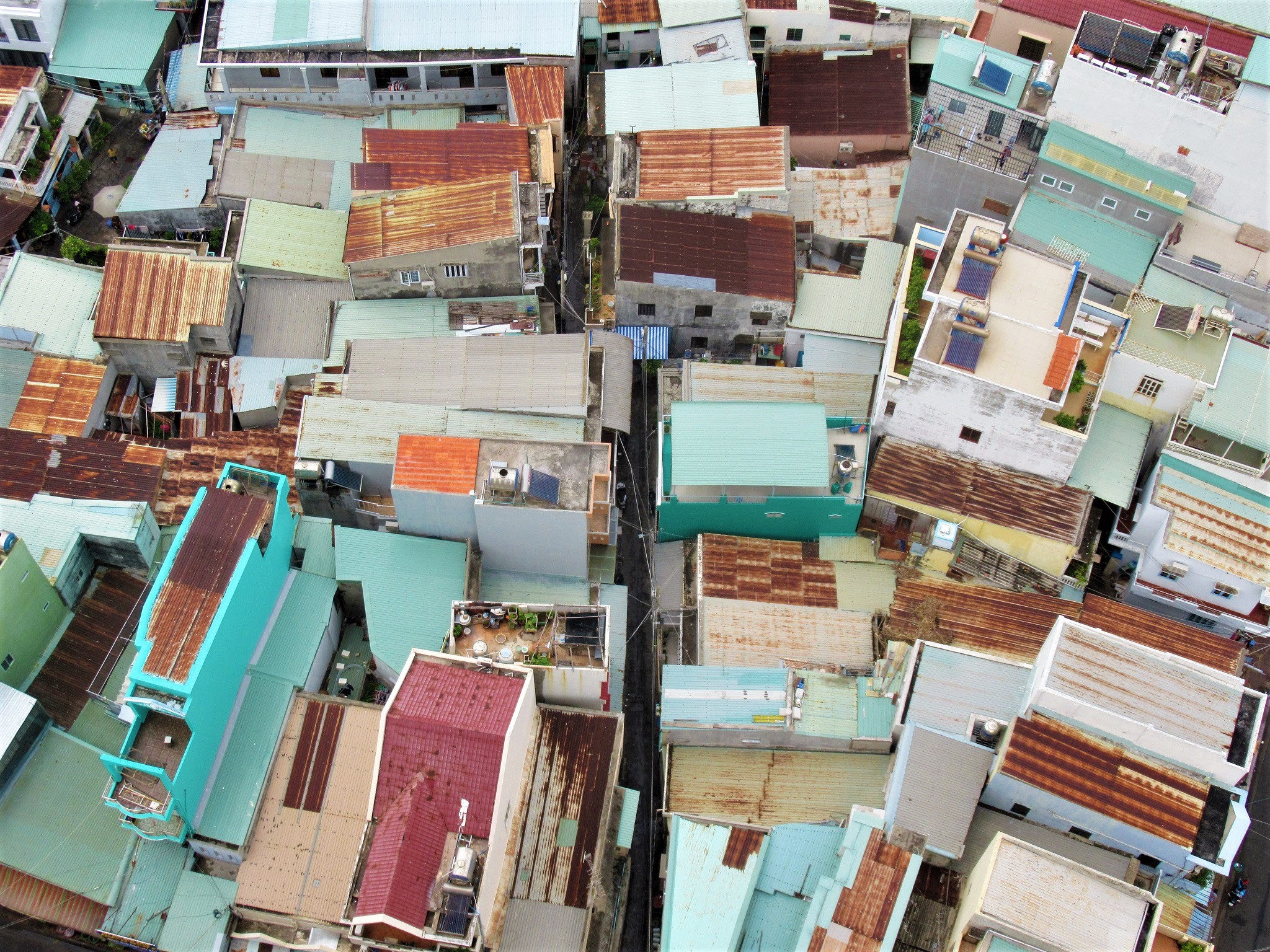 The city is large but manageable, most of it nestled on the flat land between the peninsula’s two peaks, Núi Nhỏ (Small Mountain) and Núi Lớn (Big Mountain), both of which are covered in flowering tropical trees. The lower slopes are scattered with villas, hotels, and leafy Buddhist pagodas, all connected via steep, narrow paved lanes, like a medieval village rising up from the harbour on a Mediterranean island. On both ‘Big’ and ‘Small’ mountains, several lanes continue up past the villas and pagodas all the way to the peaks, snaking through hairpin bends, past military outposts – some abandoned, some operational – before summiting and revealing expansive views over the city and out to sea. 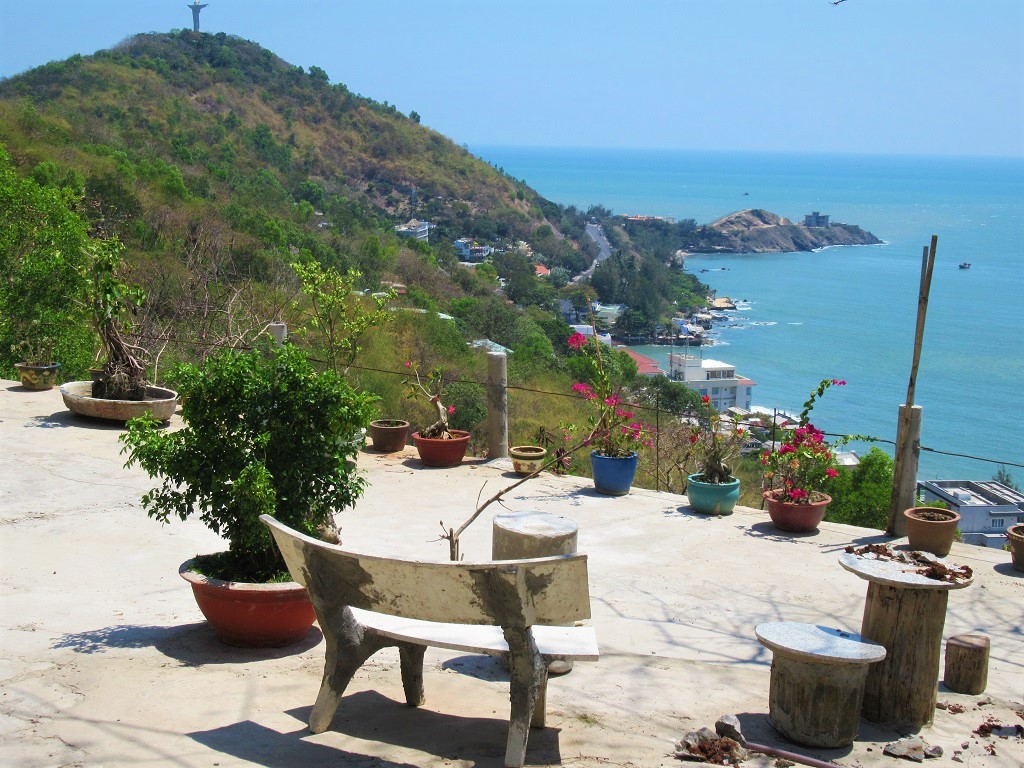 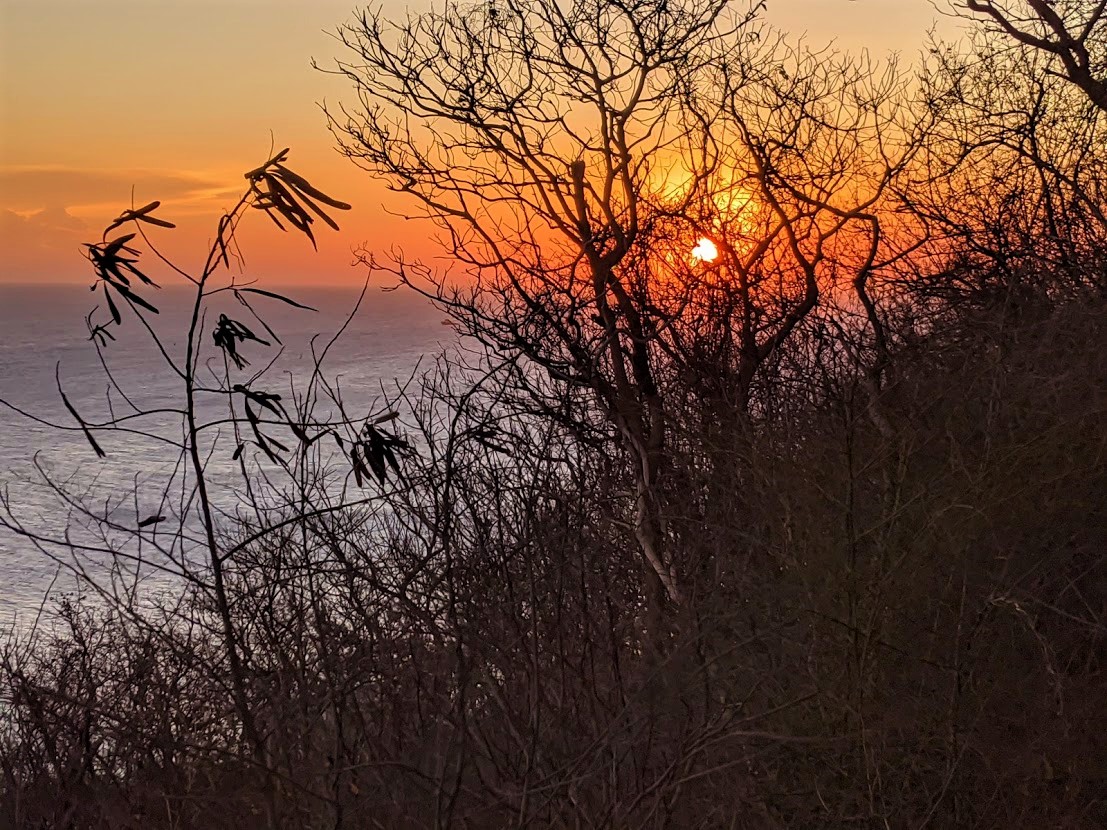 Vung Tau has one, long, sandy beach stretching along the east of the peninsula, known as Bãi Sau (Back Beach). This is where most of the high-rise hotel chains, nightclubs, souvenir shops, convenience stores, and vacation paraphernalia are: the touristy side of the city, without much charm or character, but with lots of sand and surf. Beyond Bãi Sau, rounding the southern tip of the peninsula, a giant statue of Christ looms over the city, gazing out to sea with arms aloft as though contemplating flight. Christ sits atop one of the lower peaks of Small Mountain, whose rugged slopes fall to the ocean creating Bãi Dứa (Pineapple Beach), a blustery but attractive and mesmerizing section along the seafront road with several good hotels, apartments, villas, and pagodas. From here, the embankment road swings north, stretching beneath the green heights of Small Mountain with its white, French colonial-era lighthouse placed on top like a cake decoration. Next, Bãi Trước (Front Beach) comes into view, a gentle, curving bay backed by a palm-studded seafront park with a hem of sand exposed at low tide and a clutch of wooden fishing boats moored offshore. Still, to some extent, a local beach, Bãi Trước is classy, characterful and charming: well-used by local people of all ages, as well as vacationers. 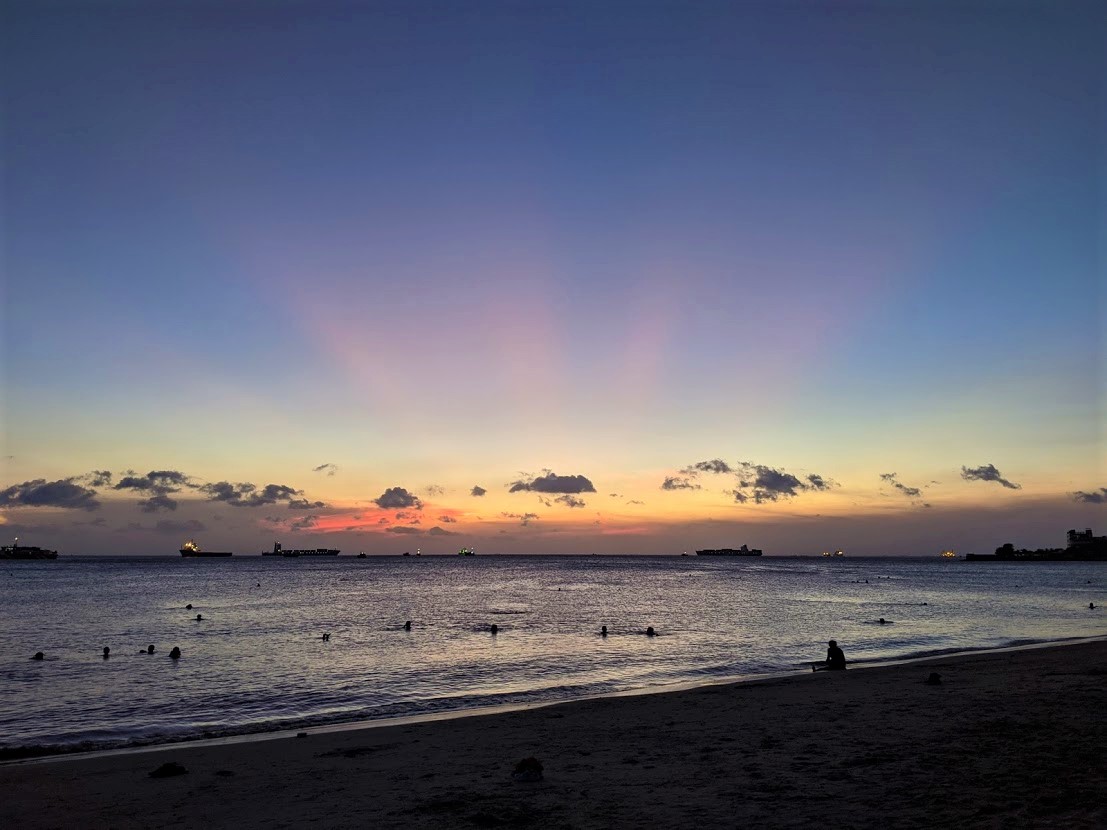 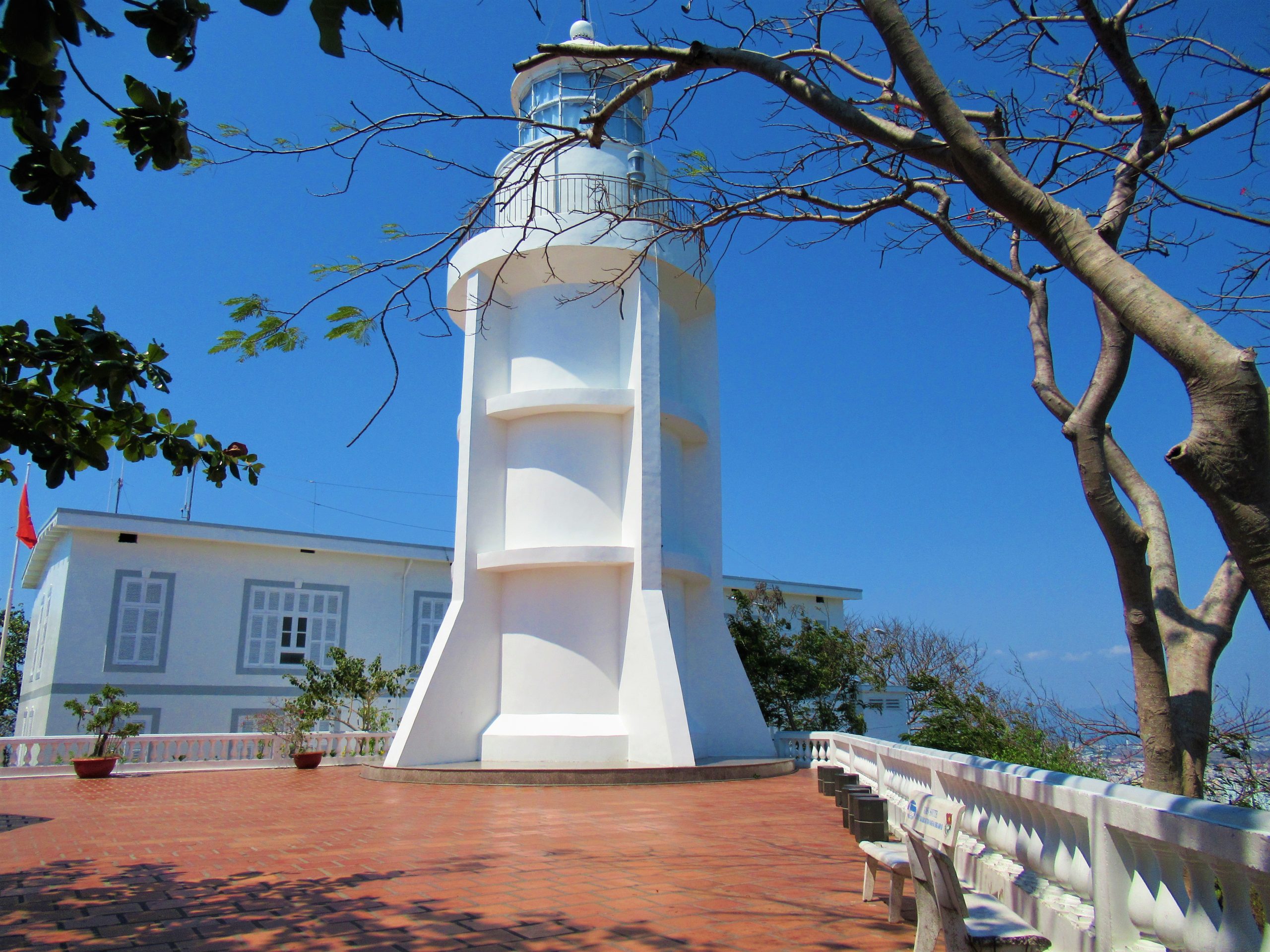 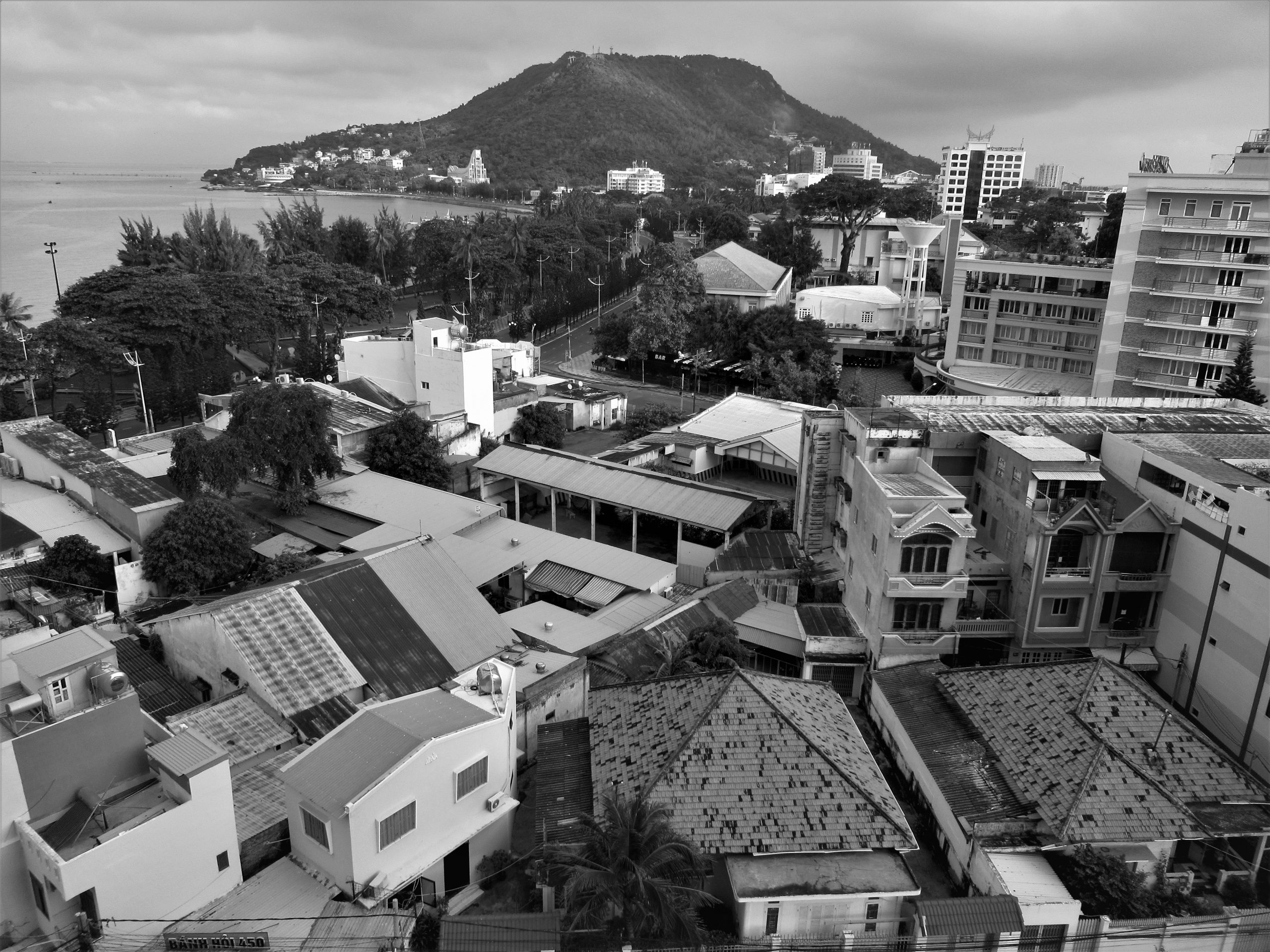 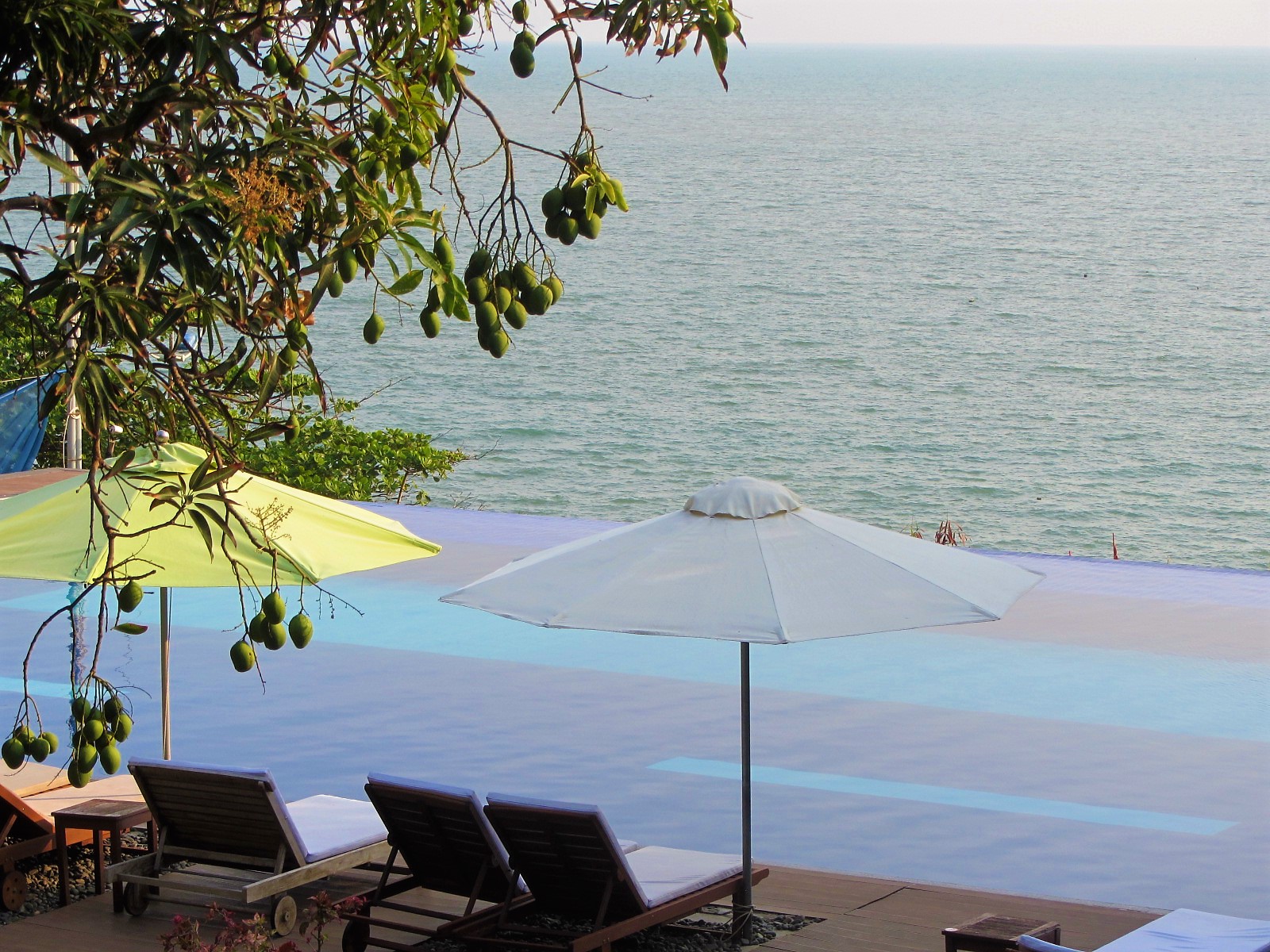 North of Bãi Trước, the steep slopes of Big Mountain bear down on the city, meeting the ocean at Ho May Port, where the boats arrive and depart for Saigon, and a cable car slides up the hillside to a theme park on the flat summit of the mountain. The white walls of Bach Dinh Palace, the former French Governor’s residence, stand out from the trees on the lower slopes. Continuing around the bottom of Big Mountain towards Bãi Dâu (Strawberry Beach), it feels increasingly like the affluent suburbs of Vung Tau, with sea-view apartments hugging the bay and modern villas hiding in the brush on the hillside, along with several Buddhist monasteries, temples, shrines, and a colossal statue of the Virgin Mary. Further still, to the northern tip of the peninsula, the seafront road turns back on itself, entering the rougher world of Ben Da fishing port and market where the car ferry departs for Can Gio. Well in the shadow of Big Mountain, a large fishing fleet shelters in a wide, calm inlet surrounded by fish processing-and-packaging factories and an oil and gas rig depot. From here, a concealed lane heads up along the spine of Big Mountain, passing a French colonial-era cannon fort, and climbing to giddy heights with panoramic views. 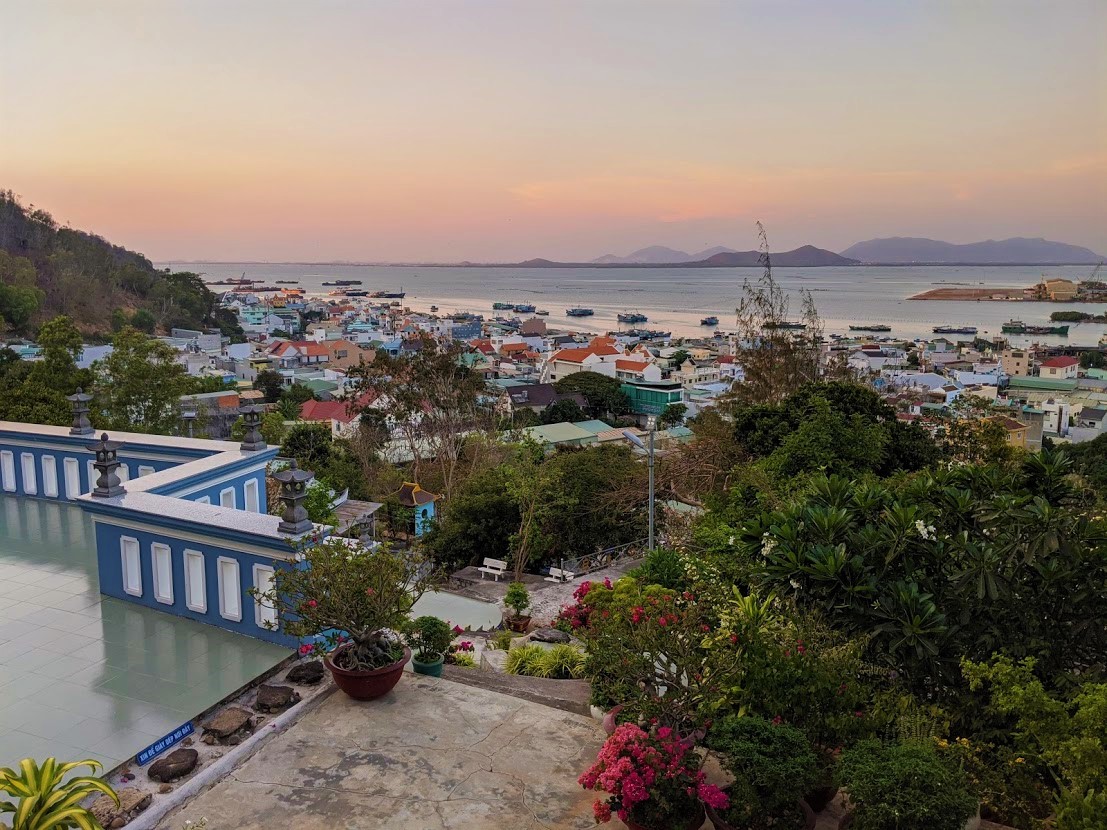 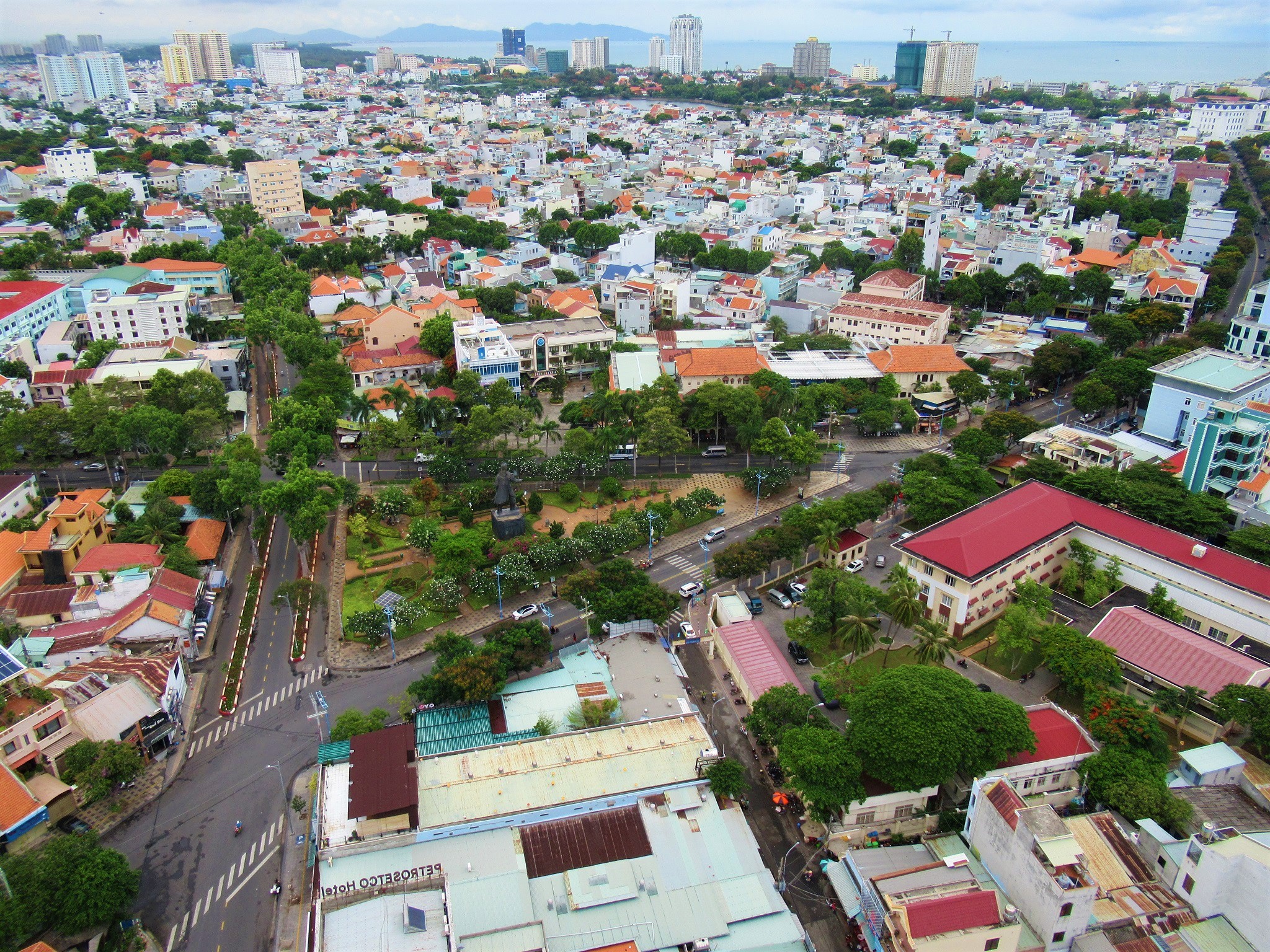 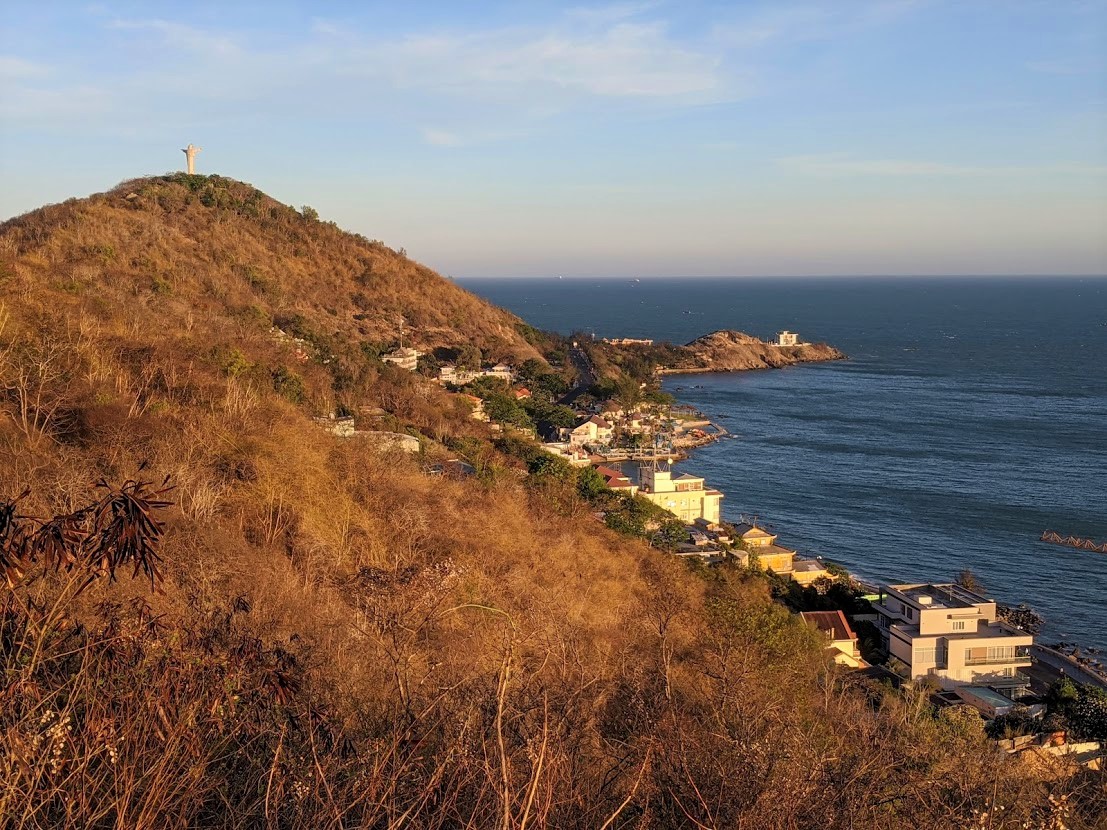 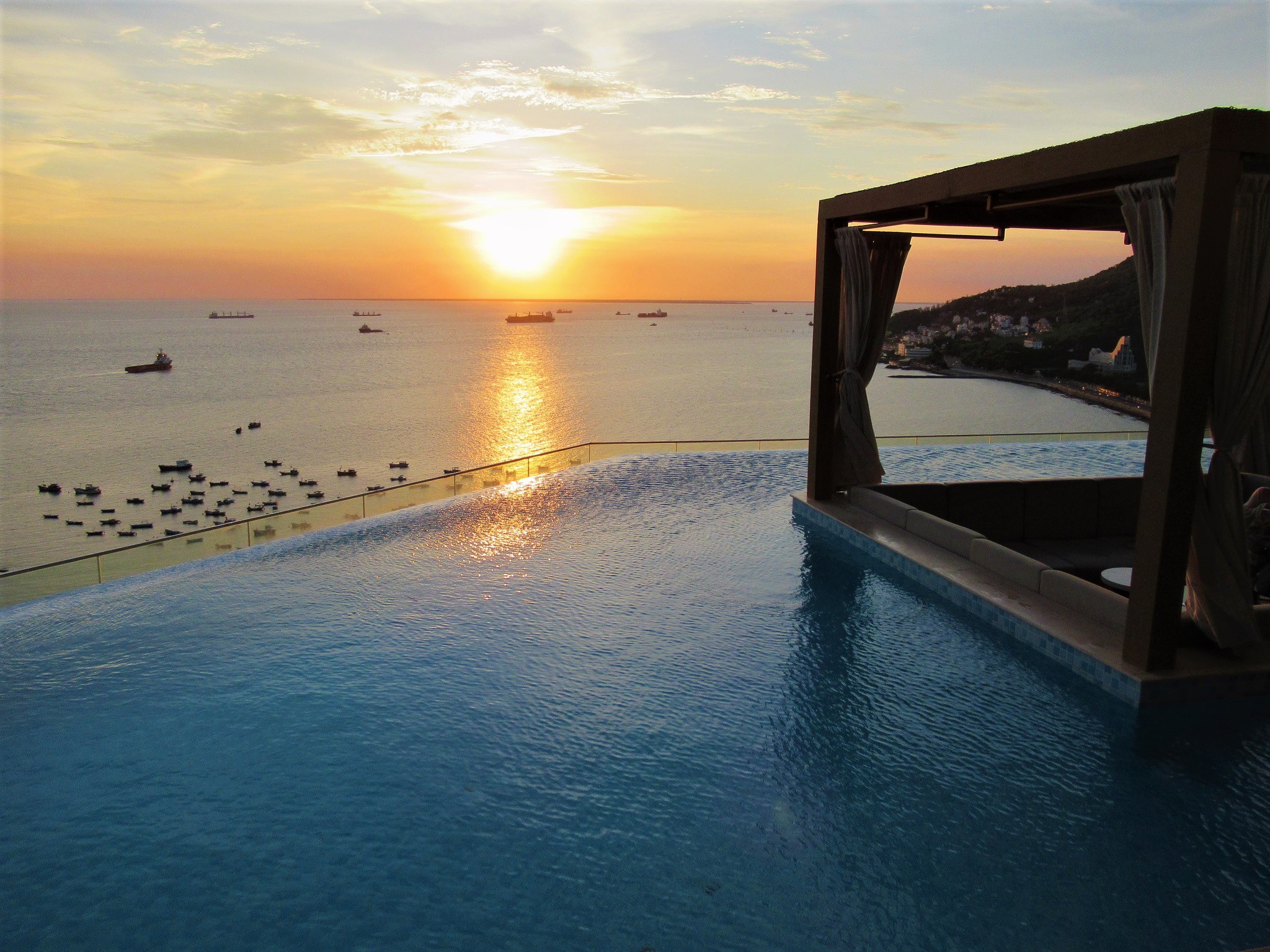 Disclosure: I never receive payment for anything I write: my content is always free & independent. I’ve written this guide because I want to: I like Vung Tau & I want my readers to know about it. For more details, see my Disclosure & Disclaimer statements here

The Can Gio→Vung Tau Car Ferry

A great boon to travellers, this new ferry connects two of the most popular destinations near Ho Chi Minh City: Can Gio mangrove forest and Vung Tau beach…

With an immaculate rooftop infinity pool & sky bar with 360-degree views of the city & sea, Fusion Suites is set to become one of the most photographed places in Vung Tau…

Some 90 minutes from Saigon, Núi Dinh Mountain is an unexpected swell of high ground rising above flat floodplains. The mountain offers a peaceful retreat into trees & streams on its rocky slopes, upon which perch dozens of temples & pagodas….

Bánh Khọt are delicious gems: crispy discs of rice flour batter & coconut milk, fried until they’re crunchy on the outside but moist on the inside, then wrapped in herbs & dipped in a sweet-spicy sauce. Here are 7 places to eat bánh khọt in Vũng Tàu…

Taking the boat between Saigon & Vung Tau is one of Vietnam’s most underrated journeys. It’s a fascinating voyage from downtown Saigon, along several rivers, and across open sea to Vung Tau. New, comfortable & more reliable boats now ply this route…

Sitting on the rocks above Vung Tau’s attractive seafront promenade, Leman Cap Resort is an excellent option for expats or mid-range travellers looking to escape Saigon for a couple of nights by the sea…