Right on Vietnam’s northeastern frontier with China, Pac Bo Cave is an important historical site in an enchanting location. The landscape along the Chinese border, in Vietnam’s Cao Bang Province, is characterized by forested limestone mountains, blue rivers, and green rice paddies. Small villages of mud and straw houses dot the narrow valleys. The scene can’t have changed much since 1941, when Ho Chi Minh walked across the border from China, entering his native Vietnam for the first time in 30 years. In the following guide, I tell a brief history of Pac Bo Cave, a description of the site, and some basic travel information. 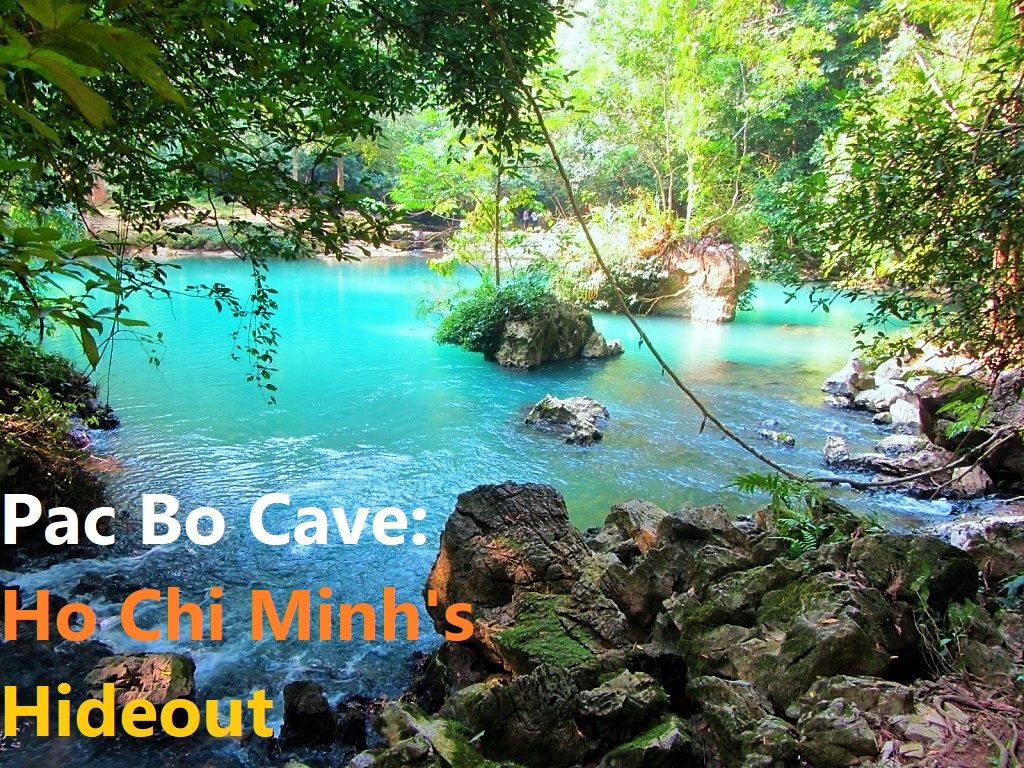 Pac Bo Cave, located on the Chinese border, is where Ho Chi Minh re-entered Vietnam in 1941

An Important Historical Site in an Enchanting Natural Location

In 1911, Ho had left Vietnam from the Saigon docks on a French ship. Working as an assistant cook, the ship took Ho to five continents, before he finally settled in Paris with a friend. During his 30 years of absence from Vietnam, Ho travelled widely, making many powerful friends (and enemies) in the process. He formed close attachments to communist and socialist parties in Europe, the USSR and China. Although Ho was often many thousands of miles from his homeland, he never lost sight of his goal of the liberation of Vietnam from French colonial rule. He learned from and made alliances with nationalist and independence groups across Europe and Asia. Ho was himself co-founder and founder of several ideological movements and political parties, notably the French Communist Party and the Indochinese Communist Party.

In the winter of 1941, Ho finally crossed the Chinese border, near Pac Bo Cave, and set foot on his native soil once again. He lived in Pac Bo Cave for several weeks before moving on to avoid detection. Four years after Ho’s clandestine return to his homeland, Vietnam celebrated its independence from French rule and Japanese occupation, when Ho read the Declaration of Independence to a crowd of thousands in Hanoi, on September 2, 1945. 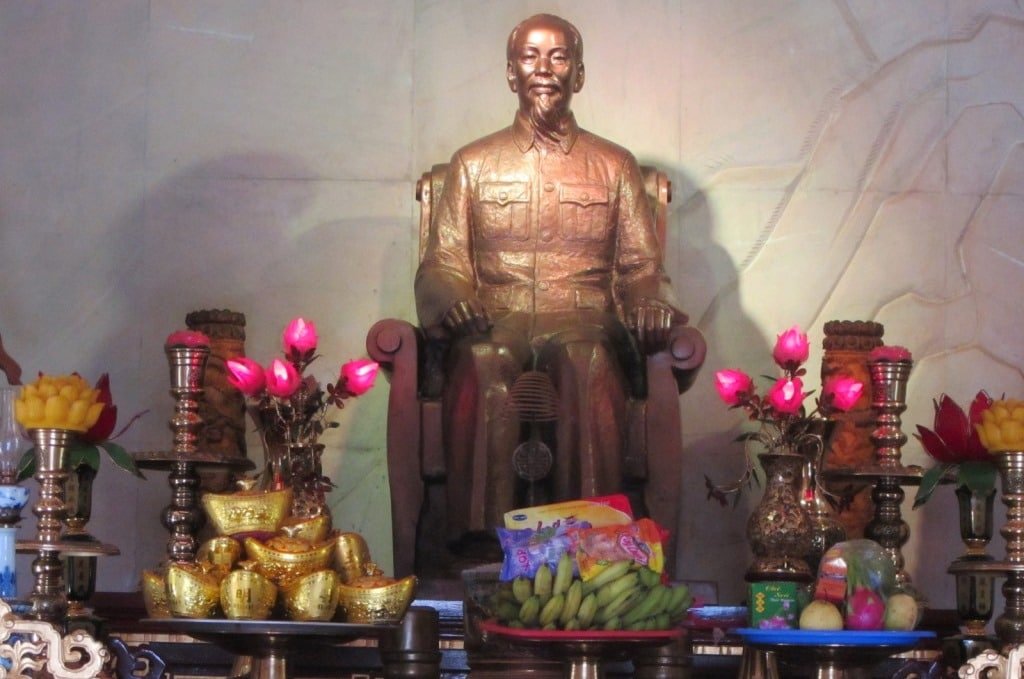 Ho Chi Minh shrine at Pac Bo: Ho was unknown to most Vietnamese in 1941 when he re-entered Vietnam

Pac Bo Cave is an hours’ drive from Cao Bang, the provincial capital, on the Ho Chi Minh Road. This road now runs the length of Vietnam: starting, appropriately, at Pac Bo and ending nearly 2,000km to the south, in the Mekong Delta. After a beautiful drive through steep, verdant valleys, the road comes to an abrupt end at a big car park. If you visit on a weekend or national holiday, chances are this car park (and the rest of the Pac Bo site) will be full of coaches, carrying Vietnamese tour groups who make the pilgrimage here. However, if you come on a weekday, especially during the middle of the day, the car park will probably be empty and you may well have this beautiful site all to yourself.

Tickets (20,000vnd [$1]) are bought at a kiosk by the car park, and the site is open from dawn until dusk. On the left, before entering the site, there’s a huge pagoda-esque shrine to Ho Chi Minh. Reached via a long staircase, you can purchase sticks of incense and place them in front of a grandiose gold statue of Ho, seated on a throne as if he were an imperial monarch (an image he never cultivated during his lifetime). There’s a large new museum next to the shrine, telling the story of Uncle Ho’s life through displays, photographs, and memorabilia. 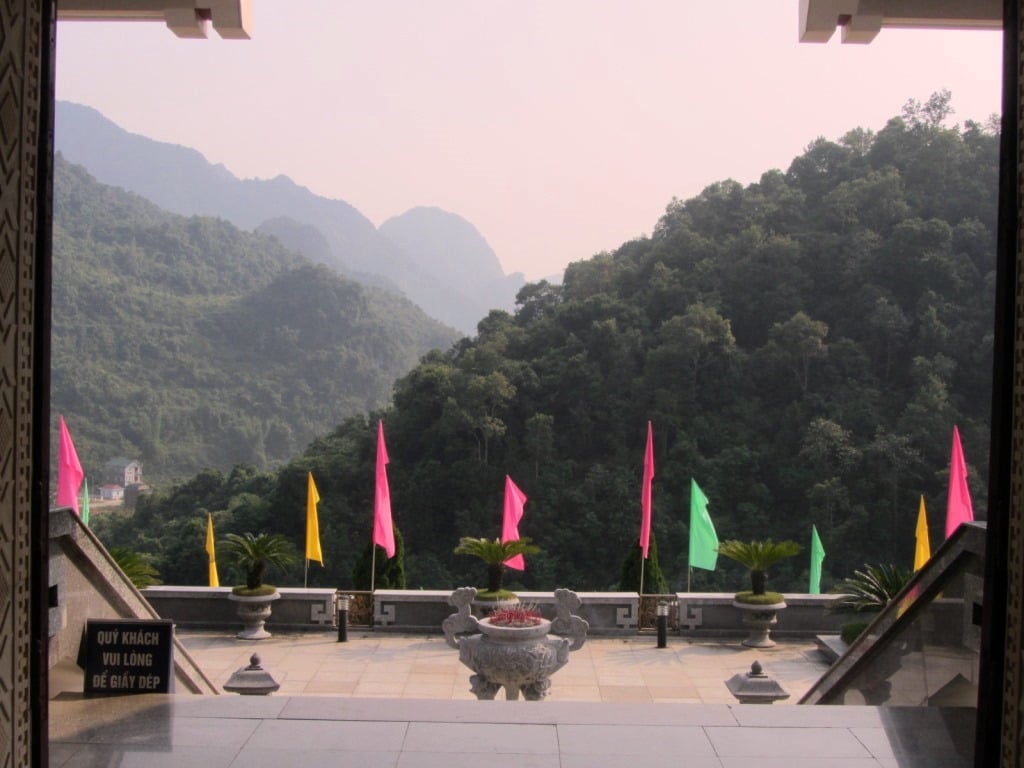 From the car park it’s a pretty 10-minute walk (or a 5-minute ride on an electric buggy, included in the entrance price) along a paved lane to the beginning of a pathway, which loops around the Pac Bo Cave area. There’s a basic map of the path printed on the back of the entrance ticket. At the start of the pathway there are stalls selling Uncle Ho memorabilia, refreshments, and trinkets. The gorgeous pool of turquoise water opposite the stalls is Lenin Creek, and the limestone hill behind it is Karl Marx Peak, both named, in the revolutionary spirit of the time, by Ho during his stay here.

Once you start on the stone pathway around the area (going anti-clockwise) you’ll see information plaques amongst the foliage and by the stream. As this site is aimed at domestic tourists, none of the signs have English translations. This is a pity because, unlike other revolutionary sites where plaques usually regurgitate socialist mantras, at Pac Bo they simply mark spots where Ho would fish, swim, pick fruit, or write poetry during his time here in 1941. Rather bizarrely, Ho himself revisited Pac Bo as a ‘pilgrim’ in 1961. By then, at the age of 71, Ho was regarded as one of Vietnam’s greatest national heroes, and his brief stay at Pac Bo Cave had already become the stuff of legend. On his return to the cave Ho made several speeches and gestures at the site, which are also commemorated with stone tablets along the path. 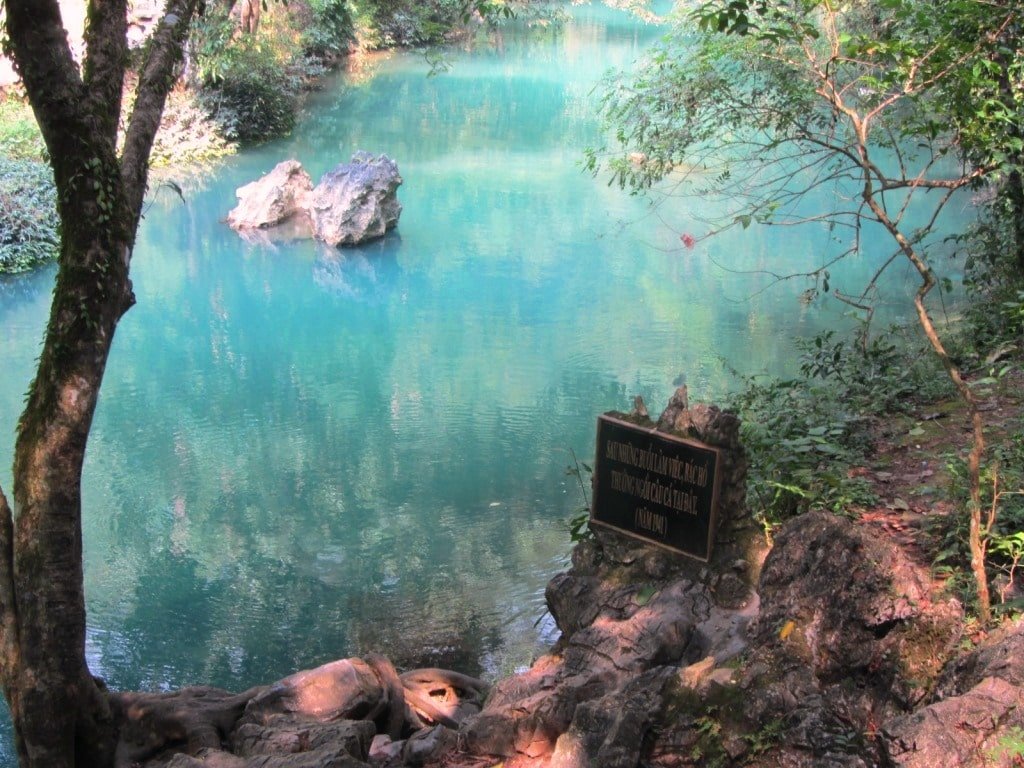 Enchanting location: this plaque by the water says this is where Ho sat to work and fish in 1941

It’s a beautiful walk, with the blue water of Lenin Creek on one side and dense jungle foliage – screaming with cicadas and tropical birdsong – on the other. The path leads away from the stream, up some steps, to Pac Bo Cave. In the summer it’s extremely humid under the canopy of trees, so it comes as a relief when, after entering the small, concealed entrance, the air inside the cave is cool and damp. Shafts of light enter the cave through small holes in the limestone. A couple of soft light-bulbs help to illuminate Ho’s wooden bed, a kettle over a campfire and the strange, Dali-esque formations in the limestone, that Ho named Karl Marx. The cave is small and so well-hidden that one wonders how anyone could have found out Ho was sheltering here. 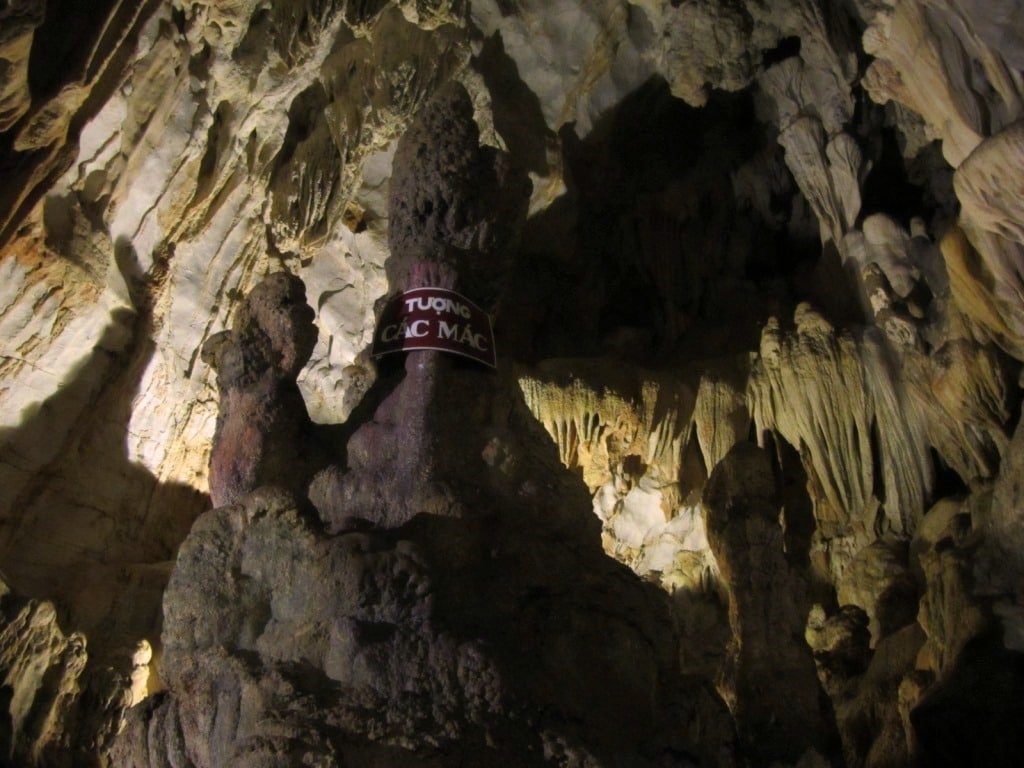 The stone path continues on the loop, passing under creepers and vines growing out over the water in all directions, creating a web of roots and branches. In damp conditions the path can become extremely slippery, so take care. Also, when the water level is high, it may be necessary to wade through Lenin Creek in order to continue on the pathway: don’t wear your best shoes. Next to a small sand beach by the creek, a block of limestone has been fashioned, through millions of years of erosion, into the shape of a table. Ho used this as his ‘office’ for writing poetry and translating texts. It’s forbidden to sit at this ‘table’, but the beach by the creek is a lovely place to sit for a while and soak up the serenity of Pac Bo. Lenin Creek would be perfect for a refreshing swim, but bathing is not allowed: this is a sacred place for most Vietnamese people. 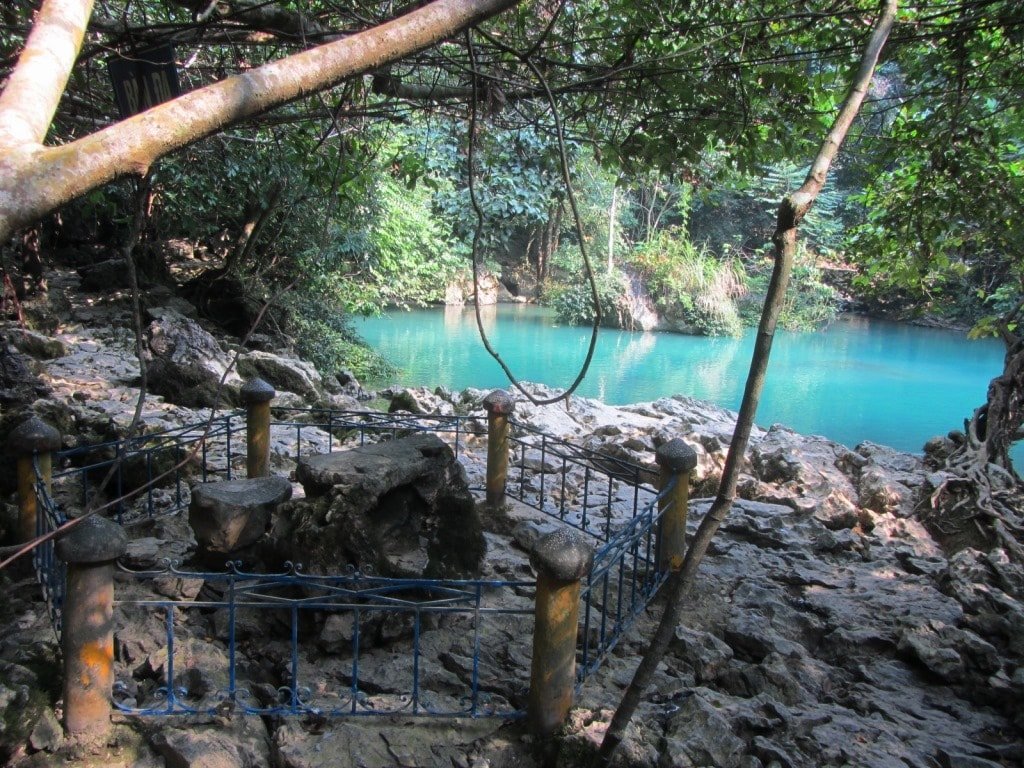 Ho’s rock ‘table’ in the foreground and Lenin Creek in the background: sadly, swimming is forbidden

The whole area, despite its popularity with domestic tourists (which, unfortunately, is often a catalyst for kitsch decoration and trash), is exceptionally well-kept, tasteful and understated. There are signs every few metres reminding visitors to throw their rubbish in the bins provided. This site, unlike the majority of revolutionary monuments in Vietnam, manages to induce a contemplative, respectful mood while not forcing its significance on the visitor or embellishing the site unnecessarily. It’s by far the ‘best’ commemorative attraction I’ve visited in Vietnam, and one of the most engaging historical sites too. It would be better if the information plaques were also in English, but the new museum can offer some background information for non-Vietnamese speaking visitors. Unlike the brash, ostentatious shrine to Ho Chi Minh that greets you by the car park, the rest of Pac Bo Cave area is elegant, sophisticated in its simplicity, and unpretentious; a fitting monument to the man who lived here from February 8 to the end of March, 1941.

To get to Pac Bo from Cao Bang city, you can rent a motorbike, take a taxi, or book onto a tour. The journey takes about 90 minutes, so you can visit Pac Bo as a day trip. There’s a guest house near the Pac Bo site, but it makes more sense to stay in Cao Bang instead, where there’s a good range of accommodation options. 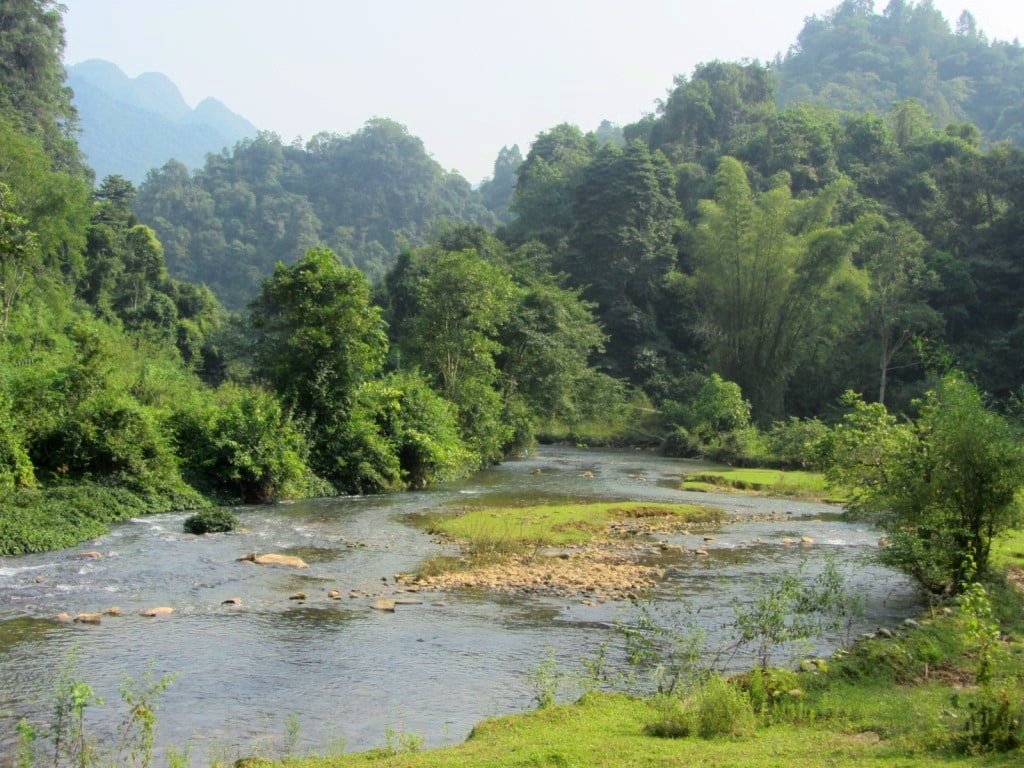 In the rugged mountains of northwestern Vietnam, the town of Bắc Hà holds a big, bright and busy market every Sunday. Attracting colourfully dressed ethnic minorities from across the region, the market has become a major magnet for tourists…

Ban Gioc Waterfall is one of Vietnam’s most impressive natural sights, yet very few foreign travellers make it here. Located right on the Chinese border in a beautiful pastoral landscape, Ban Gioc is the widest & most scenic waterfall in the country…