Royal ruins rising from the rice paddies of an agricultural plain in north-central Vietnam, Ho Citadel is a fascinating historical site in an attractive location. Despite being designated a World Heritage site in 2011, Ho Citadel has yet to attract many foreign visitors. Dating from the late 14th century, the inner walls and four main gates of the citadel remain standing among the fields. Called Thành Nhà Hồ in Vietnamese, the complex is surrounded by a fertile landscape on a fluvial plain. The sturdy walls and imposing gateways are overgrown with creepers and grass, but still make an impressive sight. Outside and inside the citadel grounds farmers go about their work, sitting down to rest in the shade of its enormous, 600-year-old arches during the hottest hours of the day. The grand ruins and agricultural work going on around them remind me of sketches by Piranesi of Rome in the 18th century, when Italy was rediscovering its past, just as Vietnam is doing today. The scale and informality of this historical site, along with the fact that so few people visit, make Ho Citadel feel like living history. This is something that appeals to me. 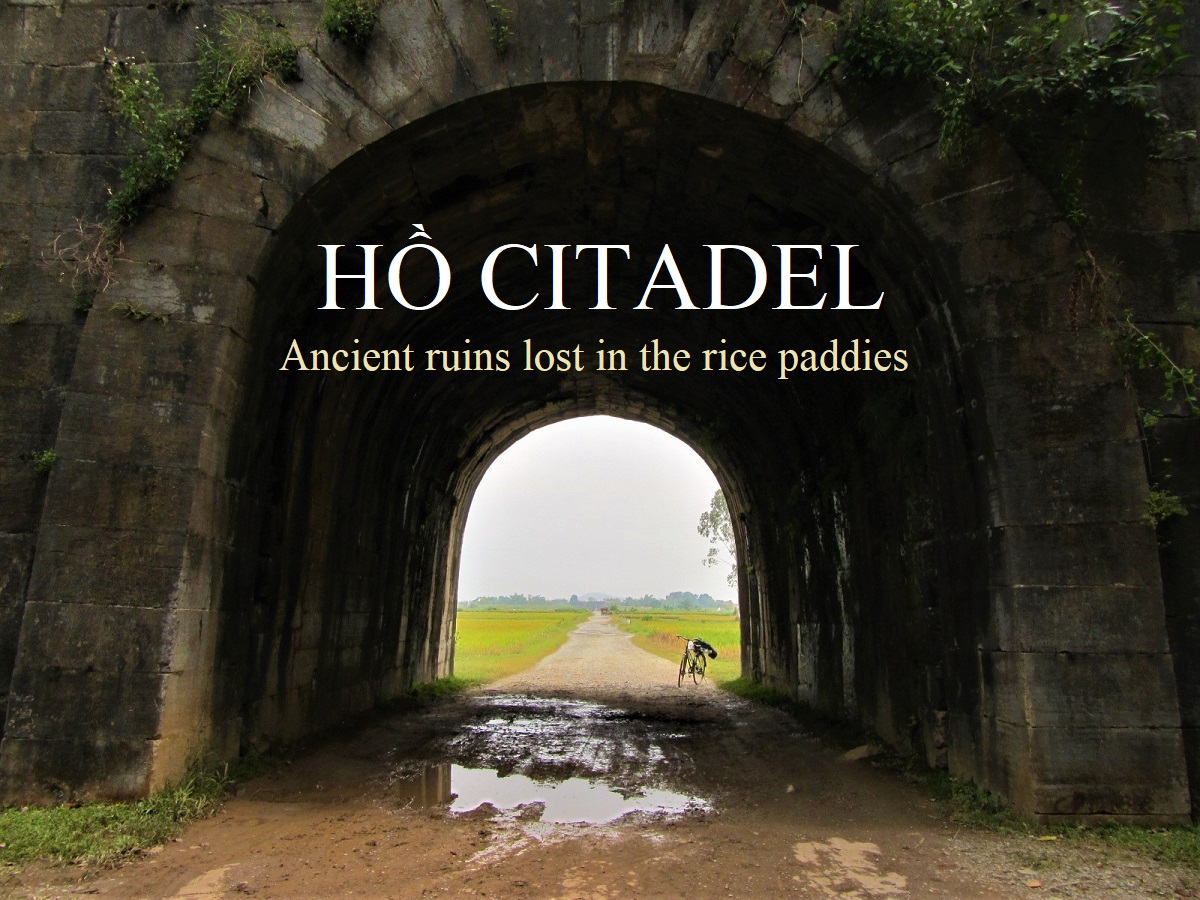 Ho Citadel dates from 1397, when Vietnam was in a state of transition from the Trần Dynasty to the Hồ Dynasty. Hồ Qúy Ly, founder of the Hồ Dynasty, moved the capital from Thăng Long (present day Hanoi) and renamed Vietnam (then known as Đại Việt) to Đại Ngu, meaning ‘Land of Eternal Peace’. But the peace didn’t last long as the Ming Dynasty invaded from China in 1407, leading to the occupation of Đại Ngu and the defeat of Ho Citadel, along with the dynasty that constructed it. However, one of Vietnam’s most celebrated heroes, Lê Lợi, fought a guerilla war against the Chinese, finally kicking them out and regaining independence in 1427. From then on, Ho Citadel became a centre of culture and was used by several royal dynasties as a fort, before losing its status in the 18th century. After many years of neglect, today Ho Citadel is beginning to attract attention from visitors on account of its huge stone gates and fortifications, still impressive more than 600 years after their construction.

*Please note: Historical information in this article is based only on my limited reading & understanding of various sources & conversations with people: I am not an historian & I cannot vouch for the accuracy of historical details in this guide. 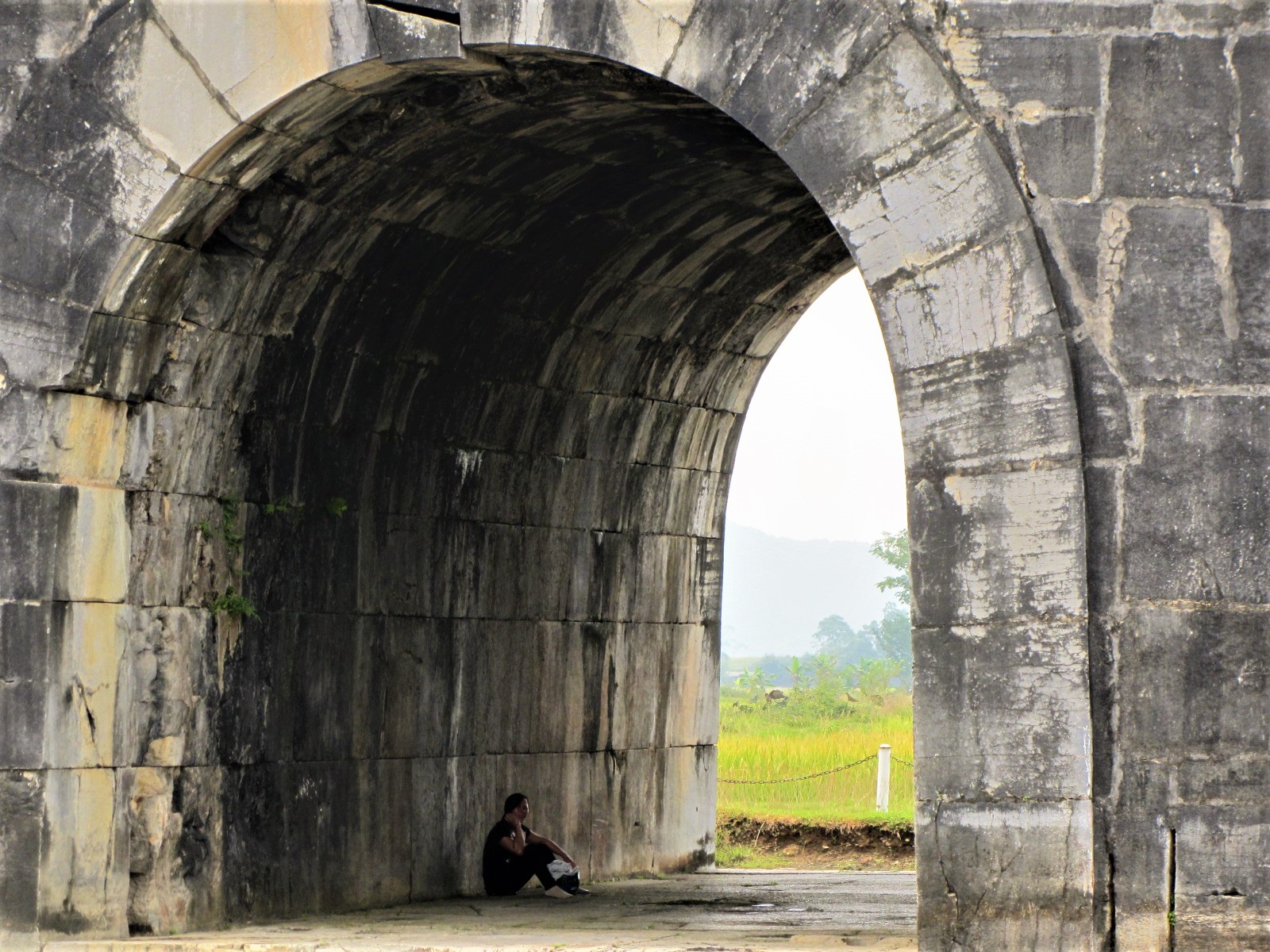 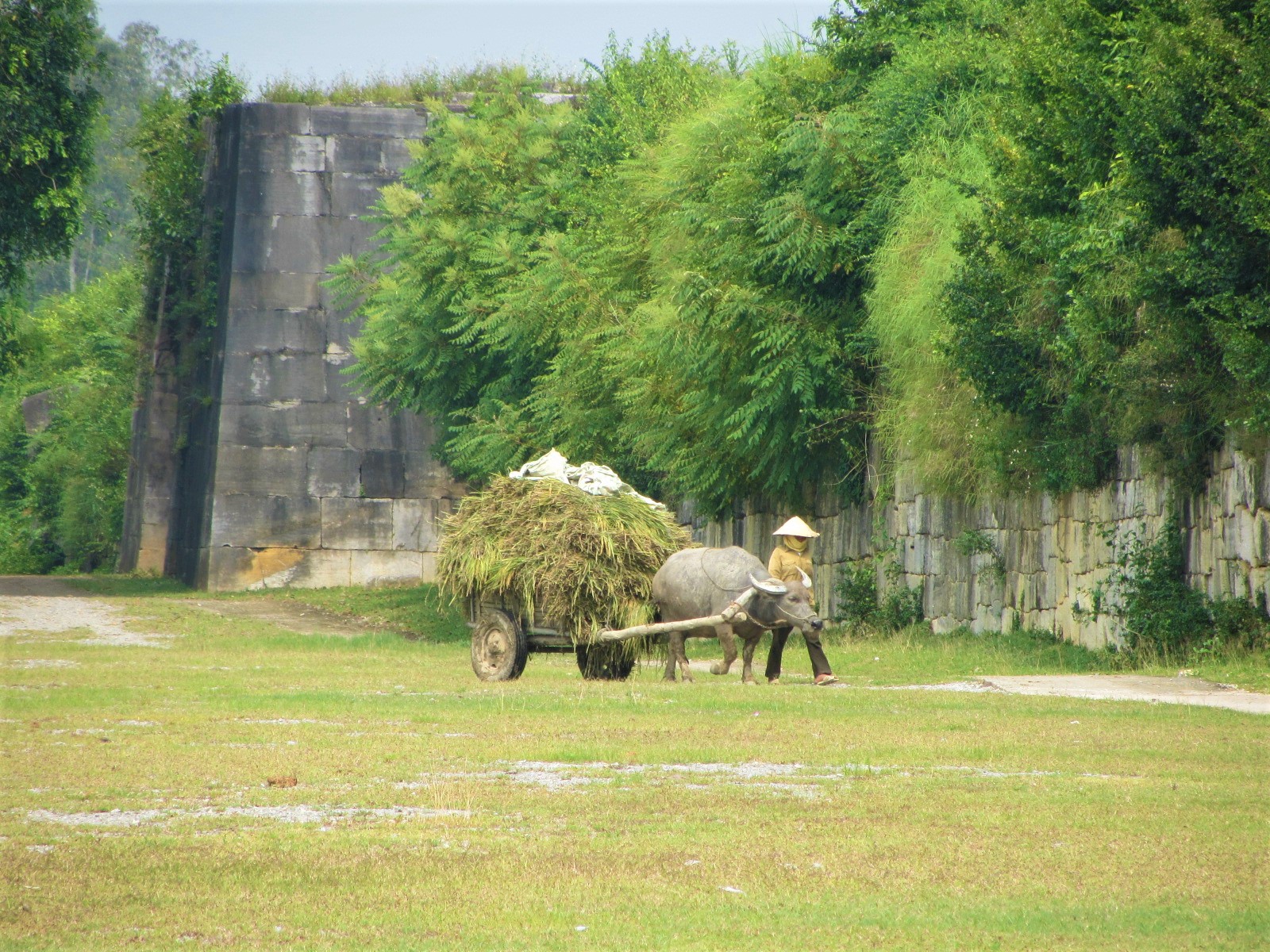 I’ve visited Ho Citadel several times. I enjoy its abandoned feel and the work that goes on in the fields around it – the farmers seemingly oblivious that their crops grow in the midst of a former royal capital. The setting is very pleasant and local people are exceptionally polite and warm. Perhaps this has something to do with the principles of phong thủy (literally ‘wind and water’, better known as feng shui or geomancy) which dictated where the citadel was constructed. Built within the ‘V’ shape formed by the convergence of two rivers, the Mã and Bưởi, Ho Citadel is surrounded on all sides by several small hills, while the land immediately around the structure is a flat, fertile plain. Whatever the subtleties and mysteries of phong thủy it certainly had some practical benefits too: both rivers had ports which served the citadel and allowed access to the ocean in the east and the forests and mountains to the west. The hills provided protection and their limestone was quarried to build the citadel and other structures. The outer walls, which still exist a couple kilometres from the inner enclosure, linked with the rivers and hills to form a protective boundary of water and earth. The flat plain within the outer walls could be used to grow crops and feed the population – as, indeed, it still is today. 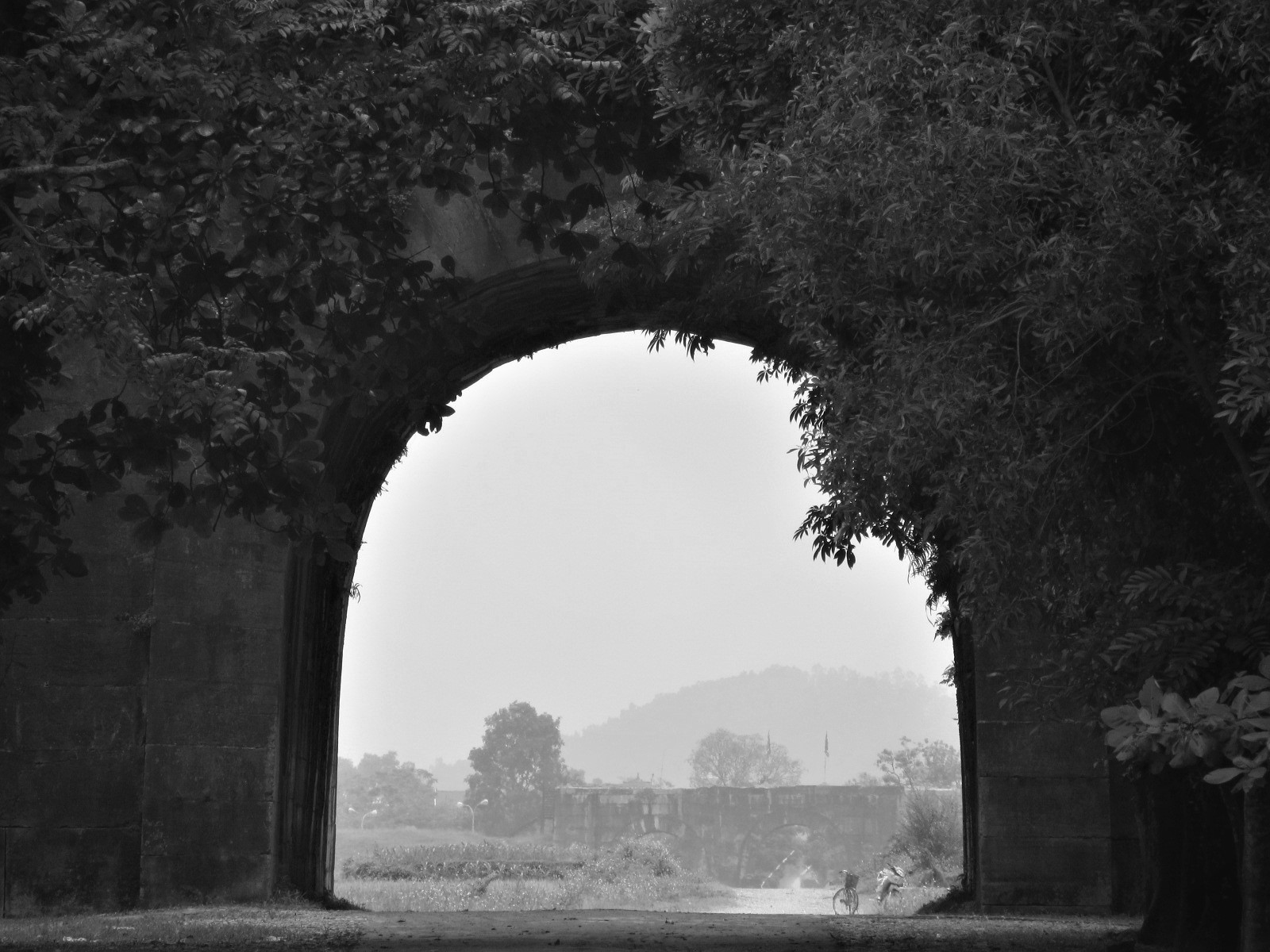 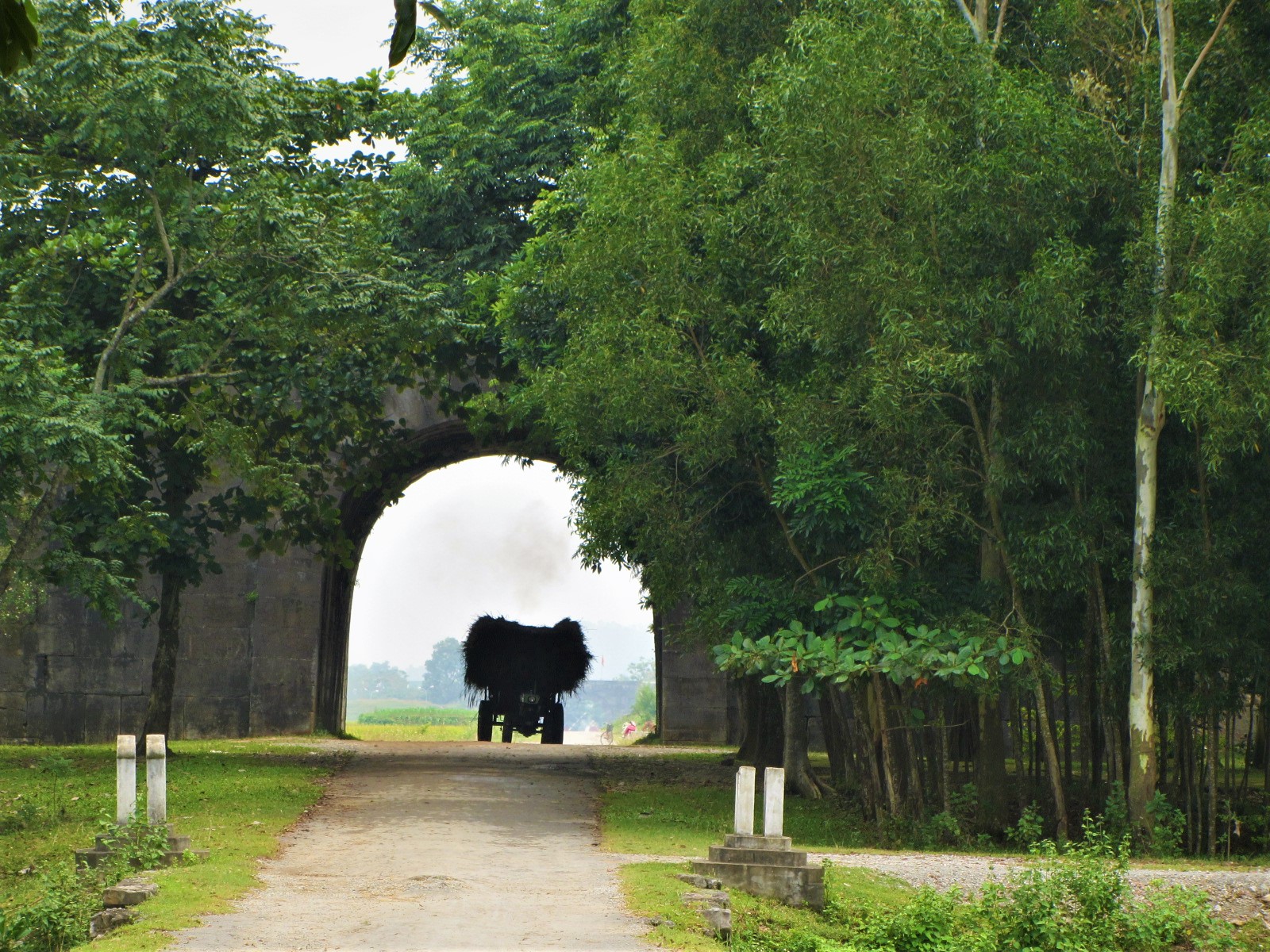 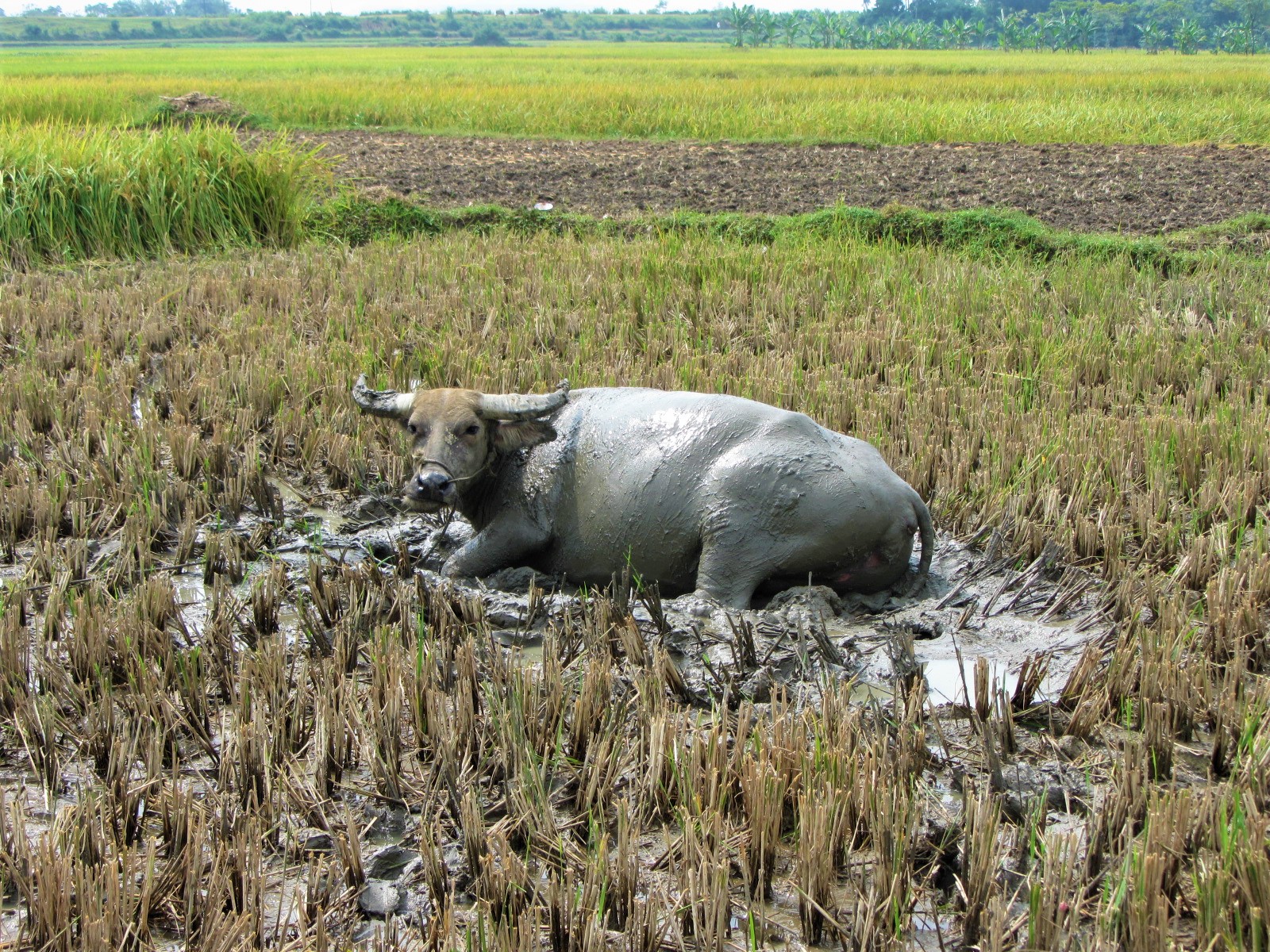 Located near the town of Vĩnh Lộc in Thanh Hóa Province, Ho Citadel can be reached by several rural back-roads. However, although the enclosure is very large, it blends into the landscape so well that the giant walls are not immediately apparent. From some positions the wall is so overgrown it’s almost indistinguishable from the farmland it abuts. The main entrance is through the south gate, where there’s a small museum, information boards and (sometimes) a guide available. The other gates also have small ticket offices, but they seem to be unmanned most of the time. If you avoid weekends and public holidays, chances are you’ll have the whole citadel to yourself, making you feel as though you’ve simply stumbled upon these ancient royal ruins in the Vietnamese countryside. 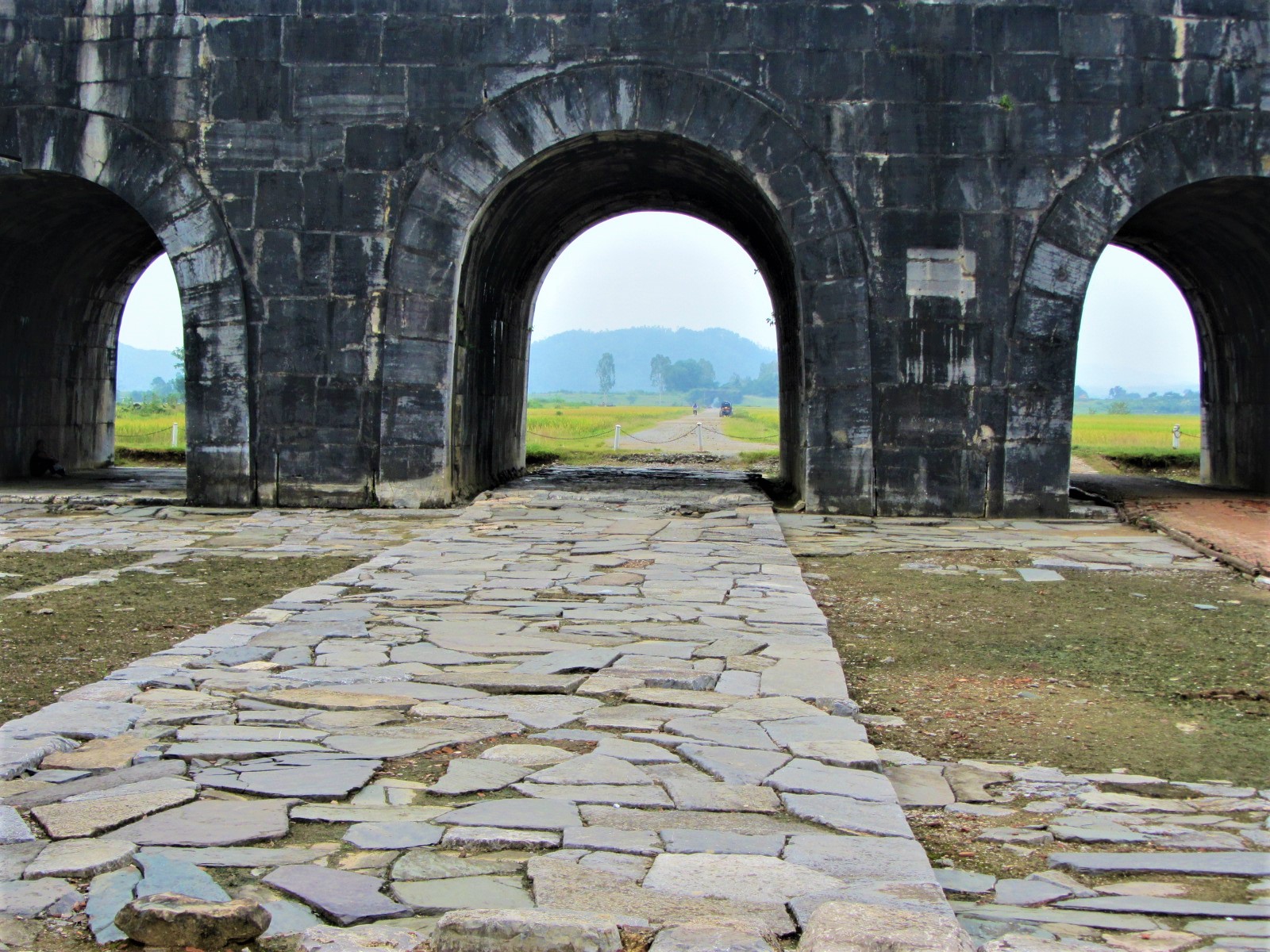 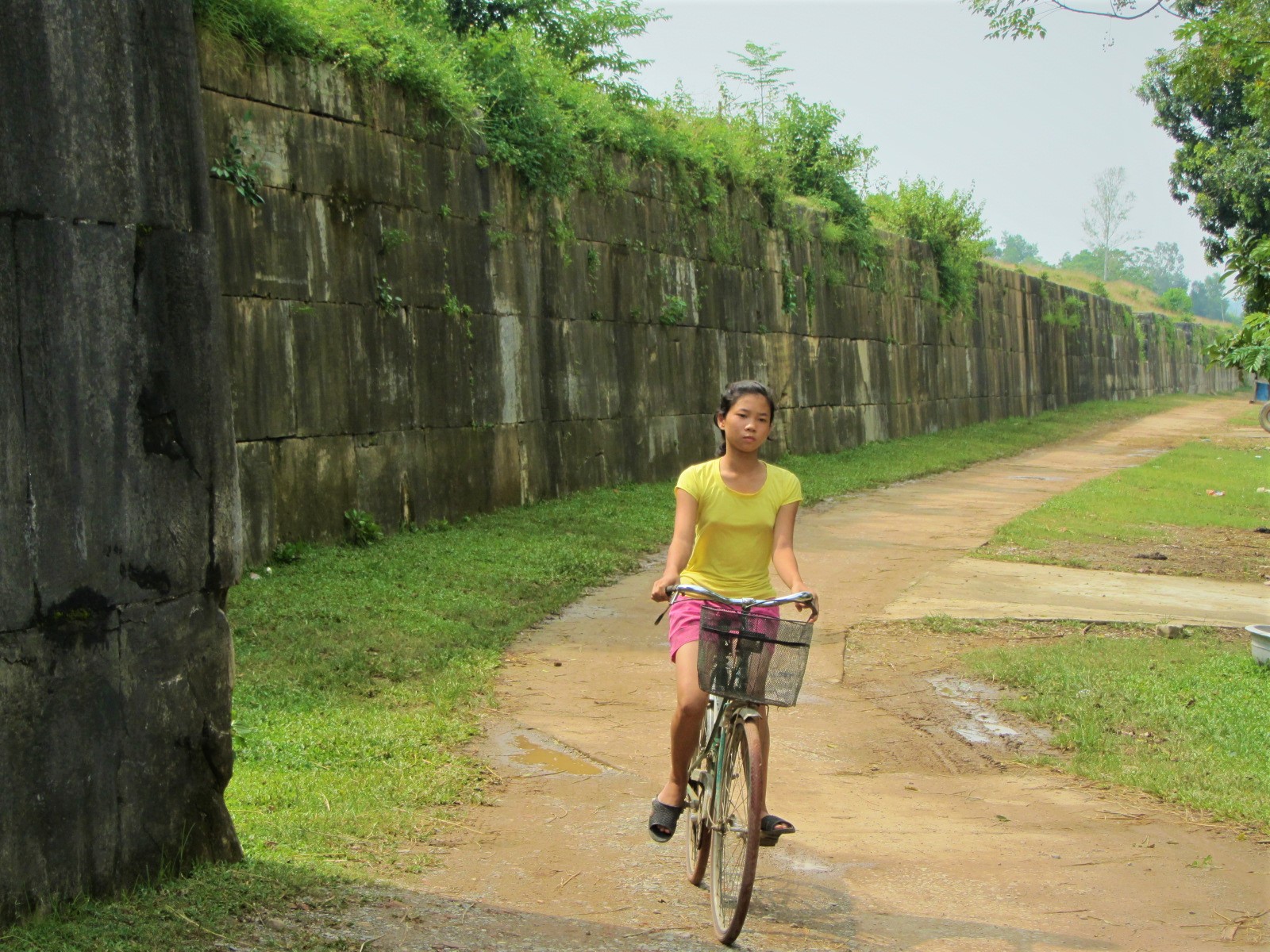 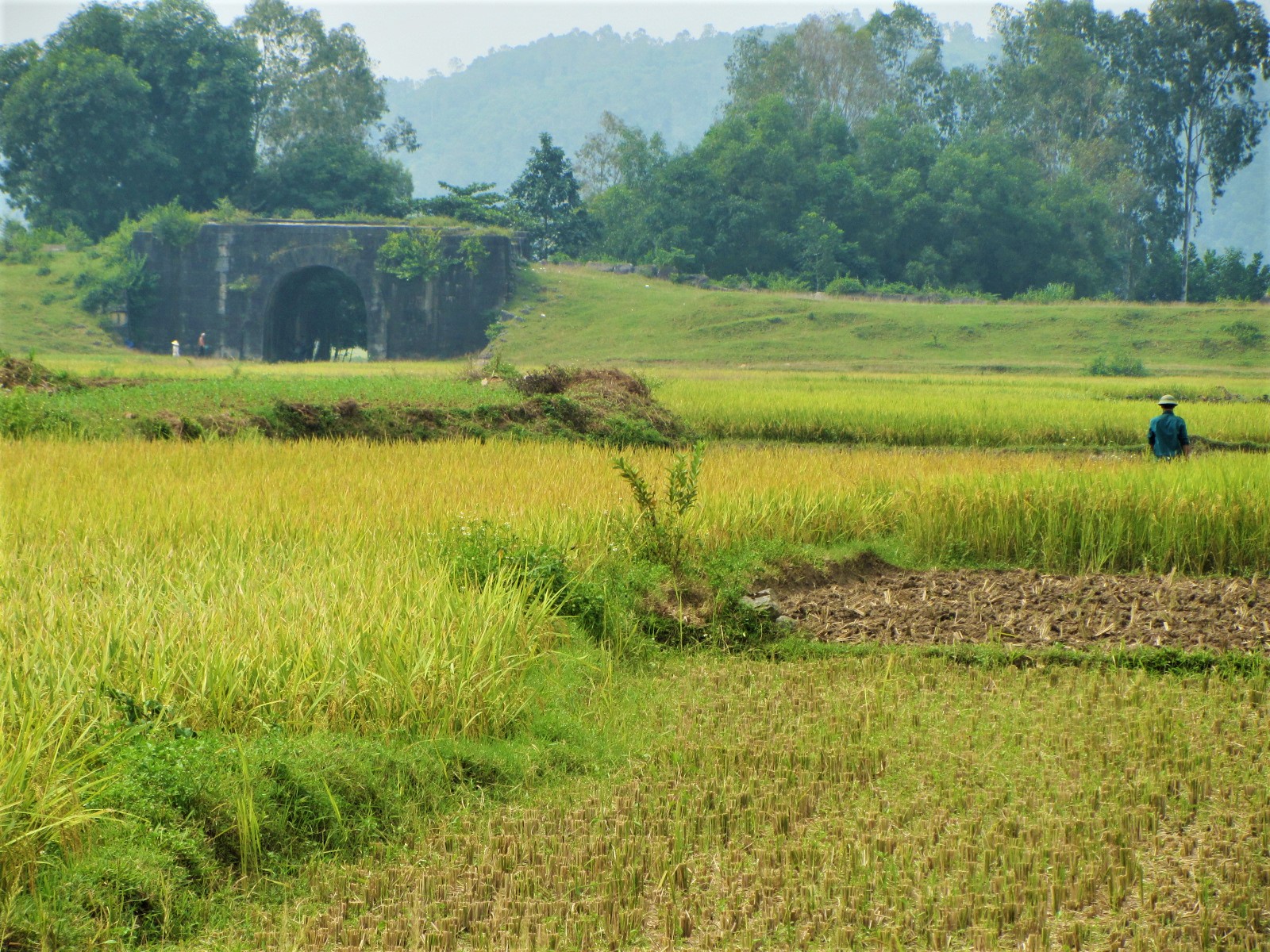 Enter the enclosure through the impressive and sturdy-looking arches at any of the four gates. You can walk, ride or cycle through the arches into the citadel proper and all around the perimeter of the walls. Inside the complex there are acres of rice fields and lotus ponds, still bisected by pathways which run according to the layout of the original citadel streets: buffalo, oxen and farmers go about the harvest on what was once the royal road. Some statues, including stone dragons, lie in muddy, flooded paddies. The walls and gates are easily climbed (there was nothing to suggest this wasn’t allowed when I last visited) and you can walk around the entire citadel like this if you choose. The mighty walls are almost a kilometre long on each side, constructed with enormous blocks almost a metre in length, and the four gates are some 9 metres high and several metres thick. It’s difficult to imagine how they could ever have been breached. 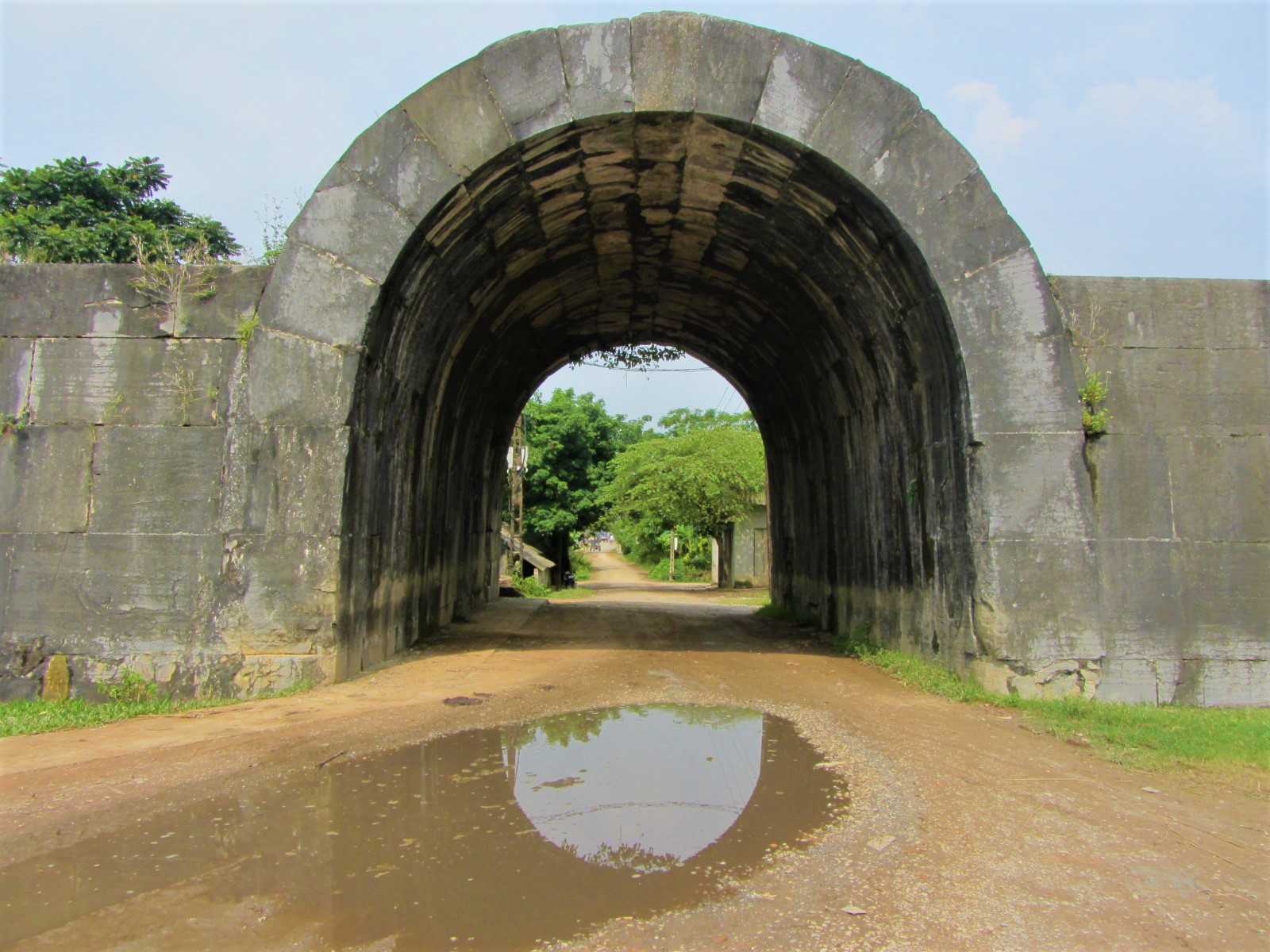 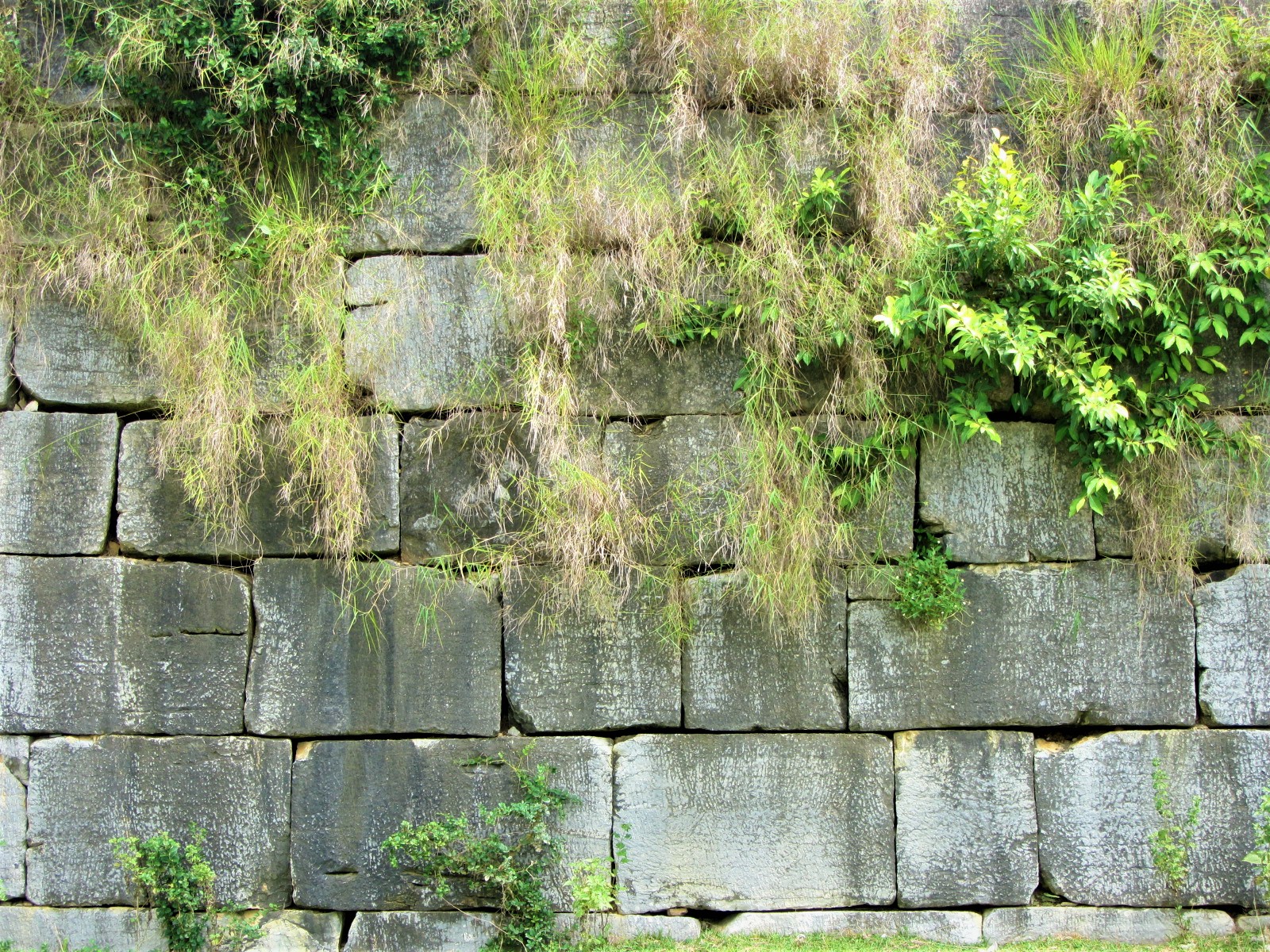 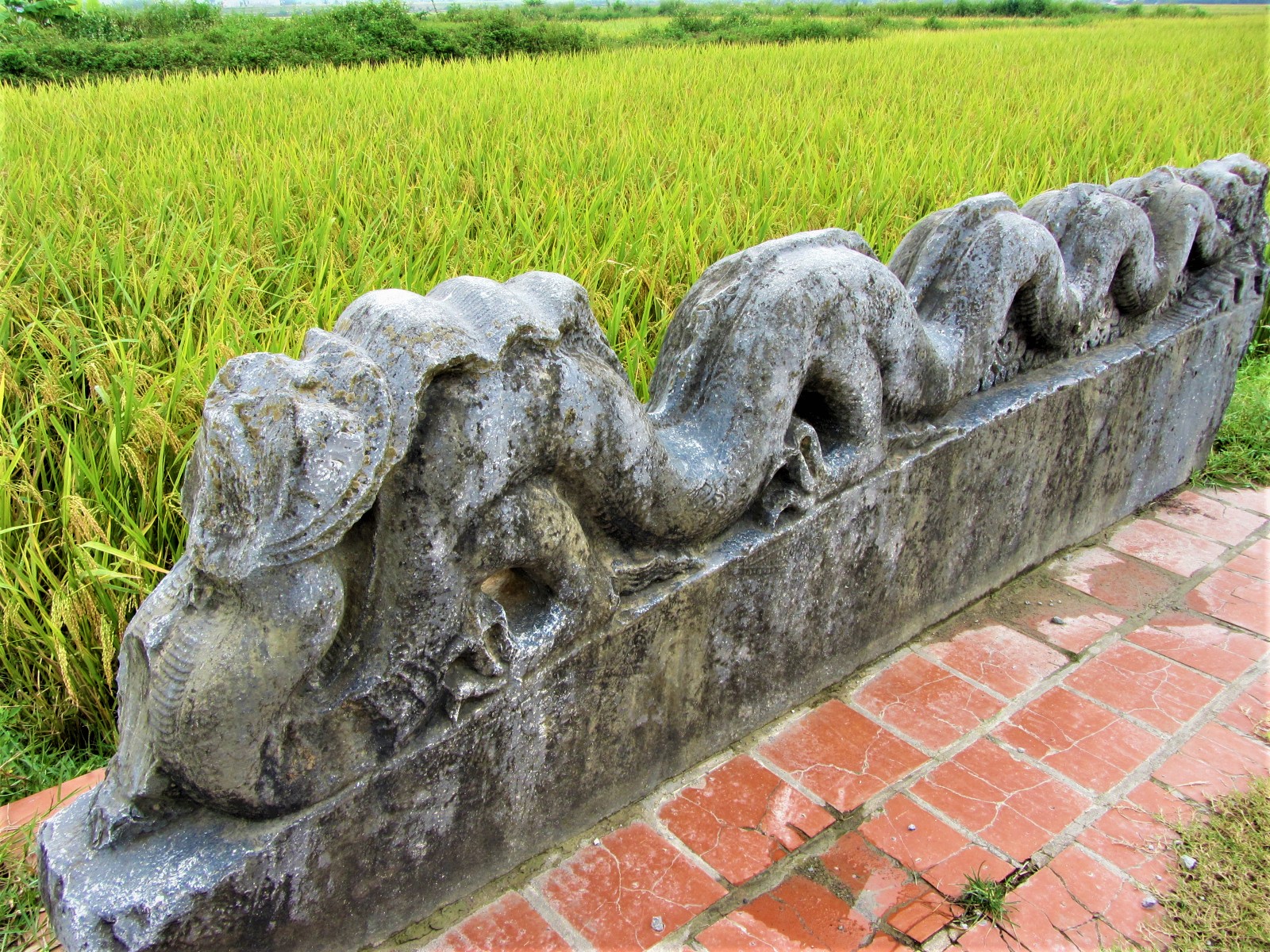 Ho Citadel can be visited at anytime of year. In the winter it gets cold, but in the summer months it can be very humid inside the citadel complex, even as thunder rumbles all around, warning of an approaching storm. Ho Citadel is a quiet, impressive and intriguing historical site, and one that ties in nicely as a detour on the Limestone Loop or the Ho Chi Minh Road. 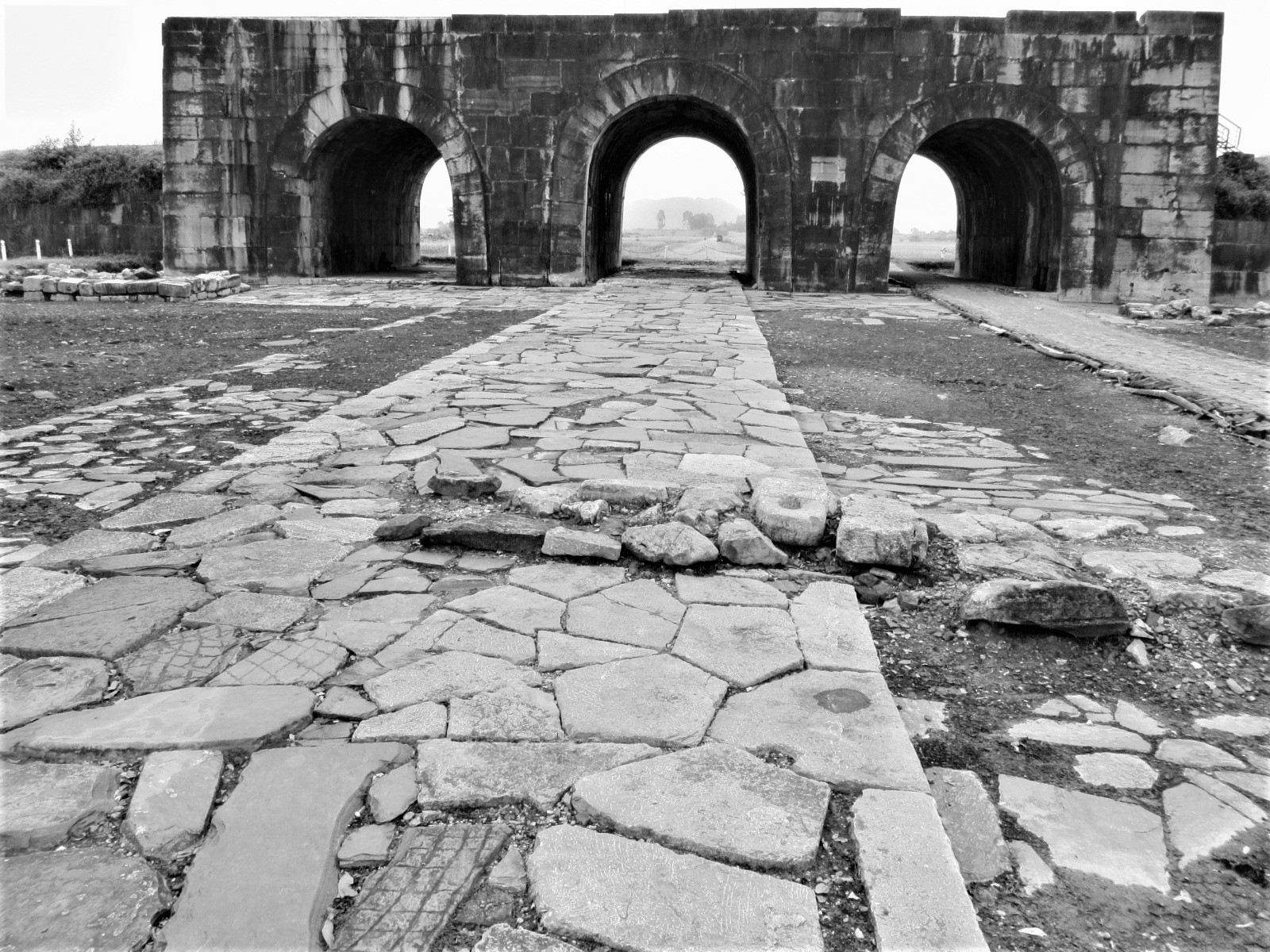 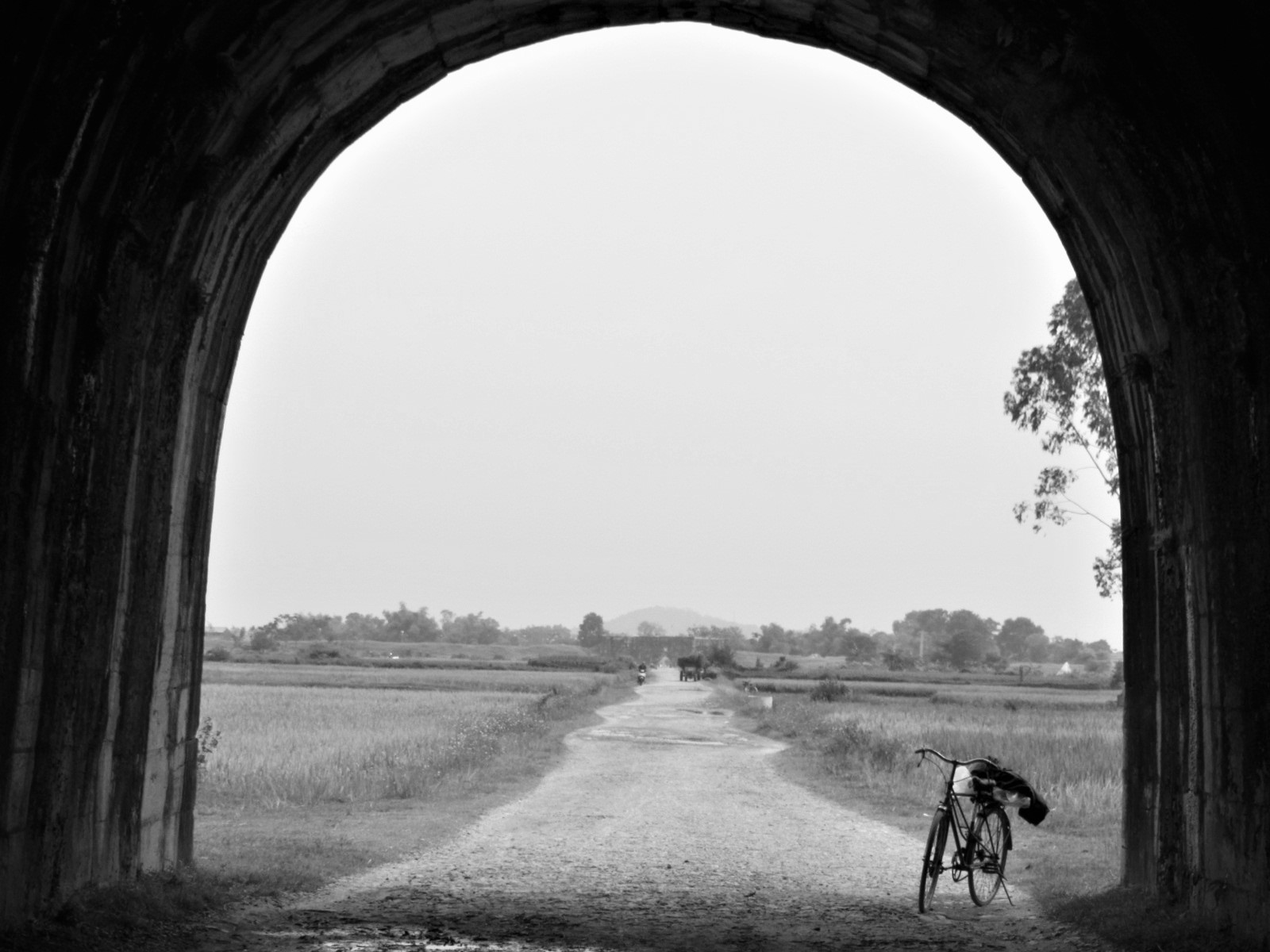 Please Support Vietnam Coracle: I never receive payment for anything I write on Vietnam Coracle: all my content is free to read & independently financed. There’s no sponsored content whatsoever. If you like this guide, please consider supporting the work I do. See my Support Page for details. Thank you, Tom 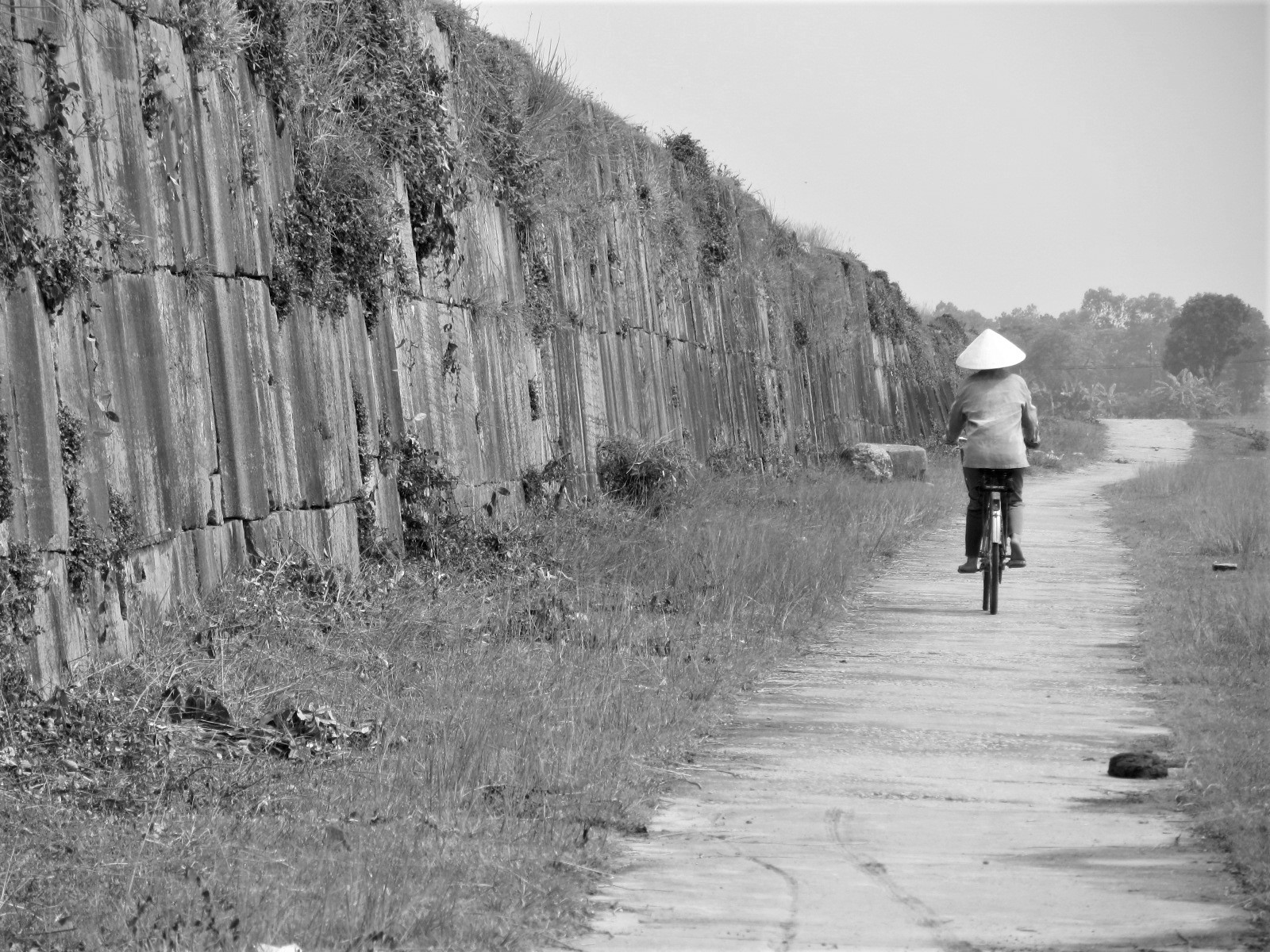 Connecting over 50 fascinating Khmer Buddhist temples via quiet back-roads through lush scenery in the seldom visited Mekong Delta province of Tra Vinh, this motorbike loop is rich in culture & off the beaten path…

In the misty forests on the slopes of the B’lao mountains, the young Buddhist monk, Thích Nhất Hạnh, came to build a retreat in the late 1950s. Now a world-famous spiritual leader, Thich Nhat Hanh was forced to abandon the retreat in the 1960s, but the site still exists….

Set among sublime landscape just a few hours southwest of Hanoi, the homestays in Pu Luong Nature Reserve are some of the most atmospheric & romantic places to stay anywhere in Vietnam….