First published May 2018 | Words and photos by Vietnam Coracle

In the heart of one of Saigon’s best street food neighbourhoods, Nguyen Huong offers up a colourful, textural, tasty, Thai-style coconut ice cream. Occupying the shopfront of one of Saigon’s fast-disappearing old apartment complexes, Nguyen Huong is the perfect sweet treat to end a night of street food exploration along the buzzing sidewalks of Su Van Hanh, in District 10. This coconut ice cream is a classic Southeast Asian dessert dish: creamy and crunchy, sweet and savoury, fun, young, and pretty enough to attract a substantial amount of ‘likes’ on your social media timelines. 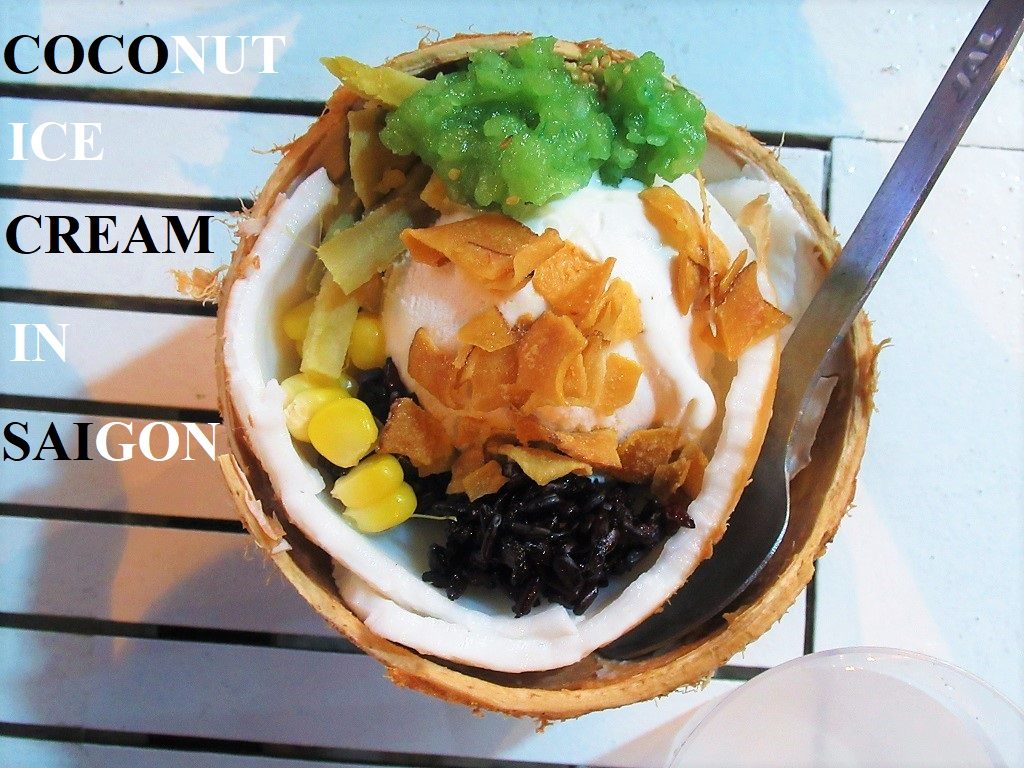 I first stopped by Nguyen Huong with a couple of friends after a night of savoury delights on Su Van Hanh Street. Full as we were – having feasted on Chinese-style duck noodles in a medicinal broth, and stacks of mini-bánh xèo pancakes filled with pork, squid and bean sprouts – we still found room to try the coconut ice cream at Nguyen Huong. At number 029 on Block H (Lô H), Nguyen Huong is only a few metres from Chè Khánh Vy, a famous, much-loved Vietnamese dessert stall, full of gooey, syrupy, beany treats. Nguyen Huong, too, is a good dessert stall in its own right; offering everything from filling glasses of bean-based chè to coffee-soaked crème caramel, among other sweet (and savoury) snacks. But it’s the coconut ice cream that you should come here for: their signature dessert.

From the outside, Nguyen Huong appears to be a chain: another in a growing list of generic bubble tea-oriented outlets, either home-grown or established brands from Taiwan, China and other East Asian nations. However, despite the familiarly garish signage, I’m told that Nguyen Huong is a one-shop business; not a chain (không có chi nhánh, in Vietnamese). Strange, then, that on their business card there are two addresses (the other being in Go Vap District, way out beyond the airport). Either way, it’s safe to assume that Nguyen Huong outlets won’t be popping up all over Saigon, like the giants of the Asian desserts world are at the moment. 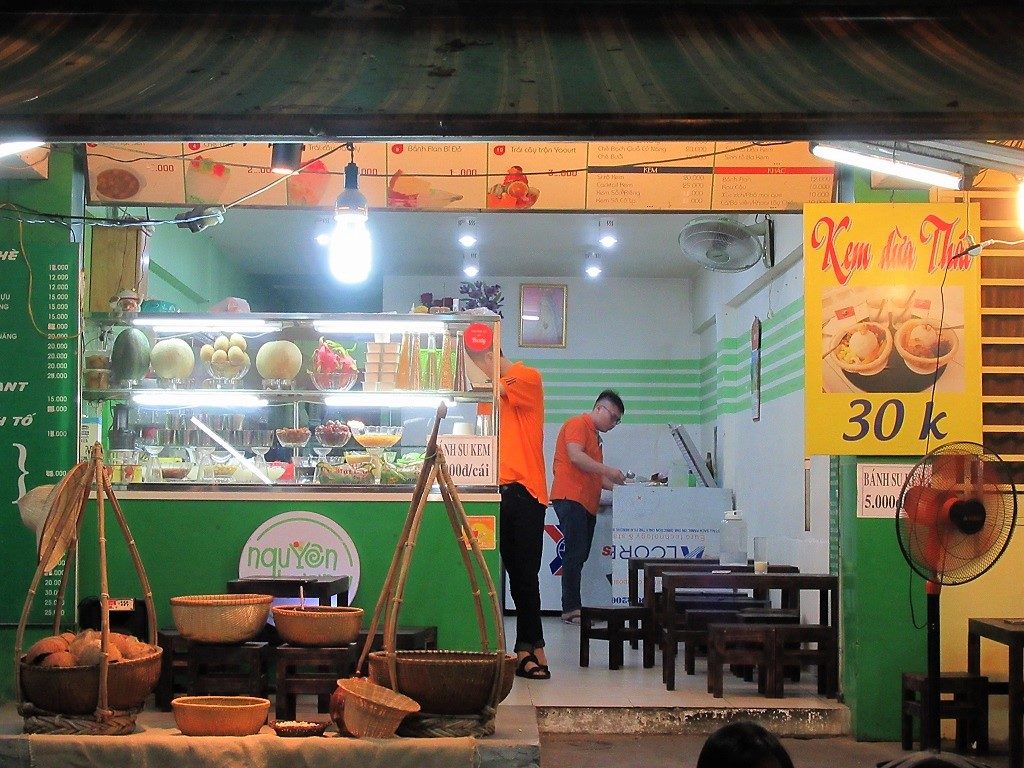 Although Nguyen Huong looks a bit like a generic dessert chain from the outside, it isn’t

Little, white-painted, wooden tables and chairs are scattered over the sidewalk outside the apartment shopfront where Nguyen Huong is located. Take a seat and order kem dừa Thái (Thai-style coconut ice cream). They’re 30,000vnd a pop (less than $1.50). Sitting out on Su Van Hanh Street is good for people-watching: there’s a constant flow of street food vendors, with diners and local residents pulling up on their motorbikes, hunkering down to some food and then zipping off again into the sultry Saigon night. Unfortunately, the unpleasant odor of an open drain wafts over from time to time, but the meat-scented smoke of all the roadside eateries tends to overwhelm it pretty quickly. 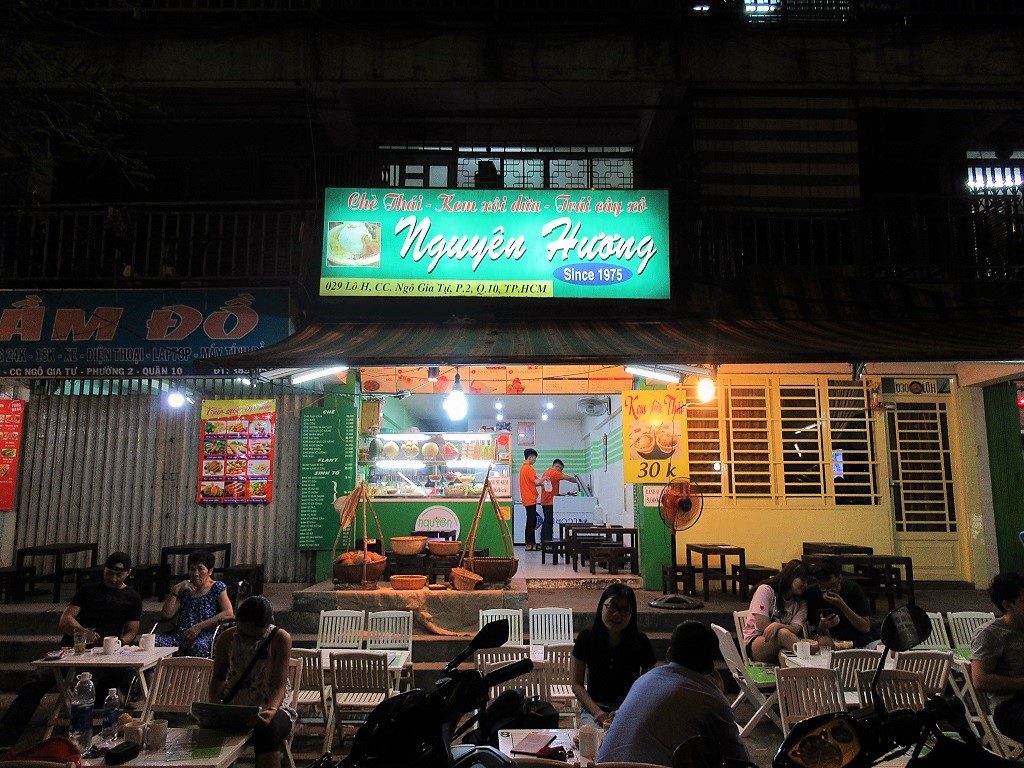 When the kem dừa arrives on your table, it’s happy-snapping time: Instagramable dishes are all the rage in Vietnam and across Southeast Asia, and this coconut ice cream has got the “it” factor. Most customers at Nguyen Huong (especially the teens and twenty-somethings) reach for their smart phones and snap away for a few minutes before digging into their ice cream. And it is, indeed, a beautiful thing… 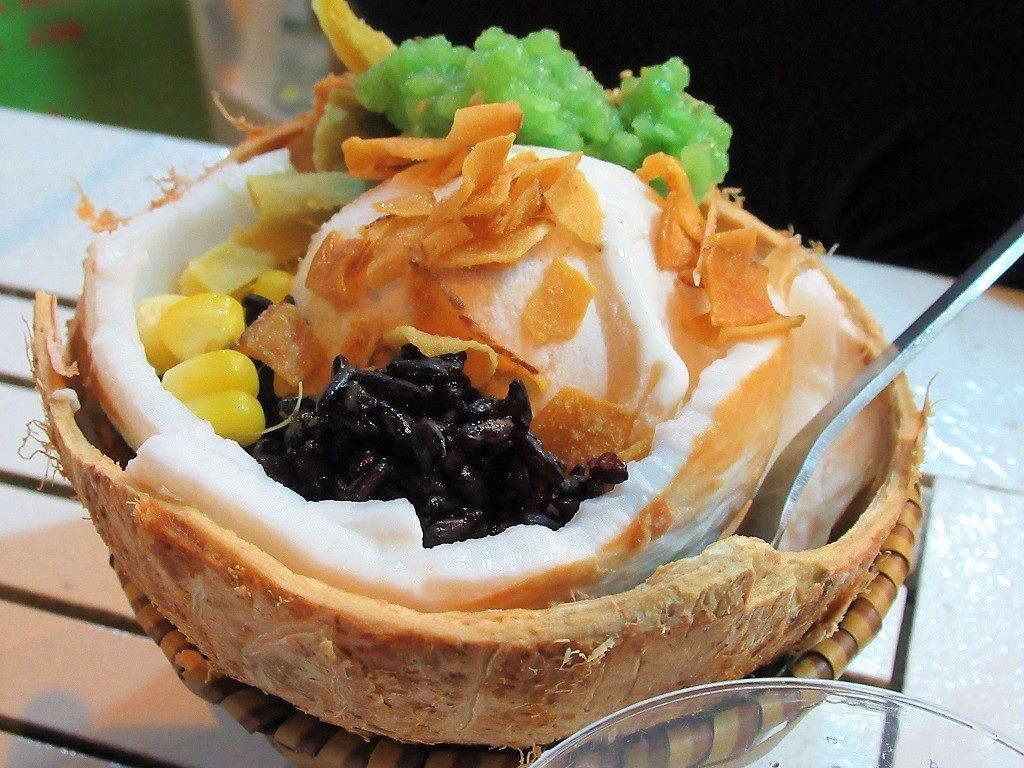 A very pretty dessert: ‘Instagramable’ dishes like this coconut ice cream are all the rage in Vietnam

What you’ll have in front of you is: a coconut shell with its white flesh carved out into a curl (making it easier to eat) and filled with a scoop of white and creamy coconut ice cream. On top is a miniature artist’s palette of color and texture: purple sticky rice, crisp, toast-brown, roasted coconut shavings, bright yellow sweet corn kernels, luminous-green, gooey pandan-leaf flavoured pounded young rice, and little matchsticks of sweet potato. Served alongside the coconut is a glass of the naturally sweet and nutritious water from your fruit. 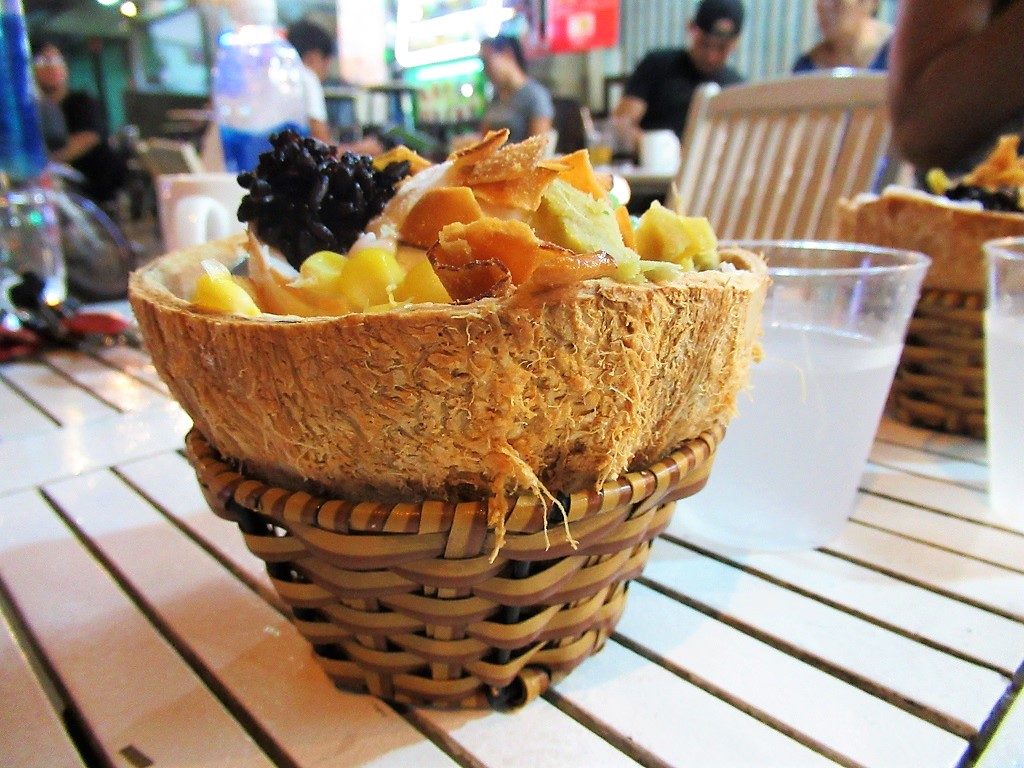 The combination of all these shapes, colours, flavours and textures (not to mention the very Vietnamese marriage of sweet and savoury) works extremely well. When I first tried the kem dừa at Nguyen Huong, I was a little confused by the savoury elements of this dessert. But it wasn’t long before I began to get it. At first it was the sweet corn that made sense to me, and then it was the gooey, chewy sticky rice. Each time I went back, a new aspect of this initially odd combination started to fall into place as my palate began to appreciate the different parts. The only thing that I still find baffling is that the coconut ice cream itself isn’t very, well, coconutty. Certainly, other coconut ice creams in Saigon win on the coconut flavour front. But for presentation, fun, location, creativity, artistry, and dining pleasure, the coconut ice cream at Nguyen Huong in District 10 has got it goin’ on. 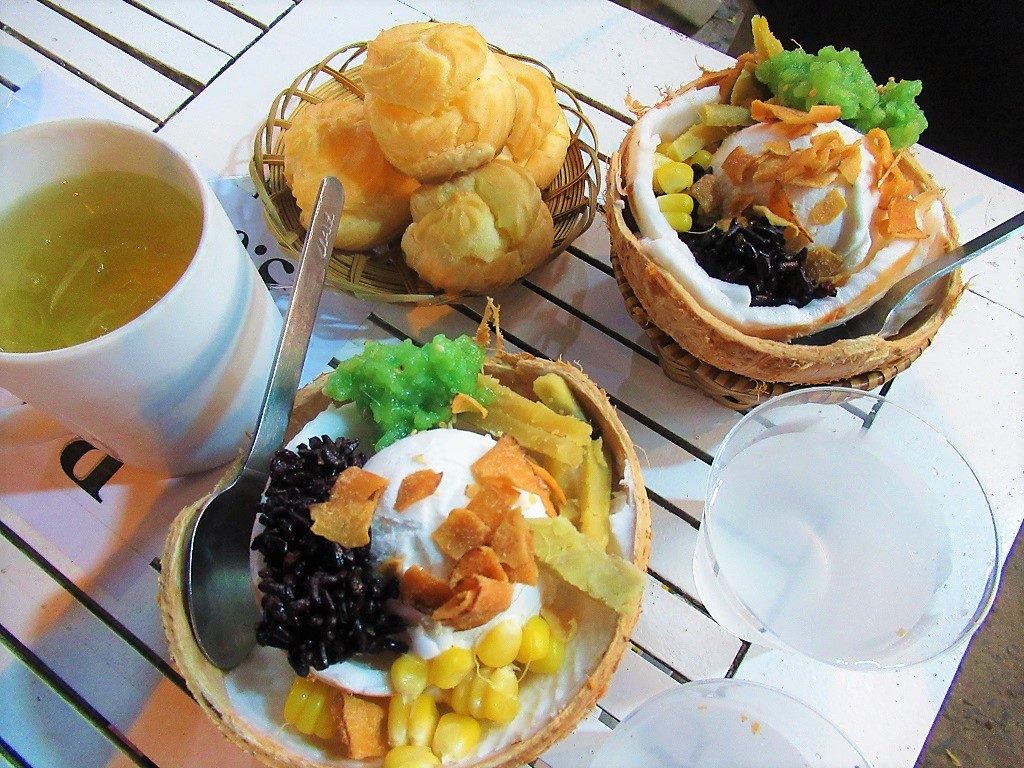 The combination of sweet & savoury & all the colours, flavours & textures works extremely well

Throughout Saigon, there are clusters of crumbling old apartment complexes, all of which are on the verge of either collapse or demolition. Living conditions appear cramped and grim but, outside on the sidewalks, the street life and street food is among the best and most vibrant in the city…