First published May 2016 | Words and photos by Vietnam Coracle


This post was last updated 6 years ago. Please check the comments section for possible updates, or read more on my Updates & Accuracy page.

Throughout Saigon, there are clusters of crumbling old apartment complexes, all of which are on the verge of either collapse or demolition. These are large, grey, concrete buildings, where living conditions are fairly cramped and grim. But, perhaps because of the rough conditions inside the apartments, life outside – on the streets and alleyways between the concrete blocks – is rich and vibrant. As is so often the case in Saigon and Vietnam in general, street life enlivens these relatively poor areas, making them some of the most exciting street food destinations in the city. This is my guide to three of Saigon’s aging apartment complexes, which I like to call, Street Food Ghettos. 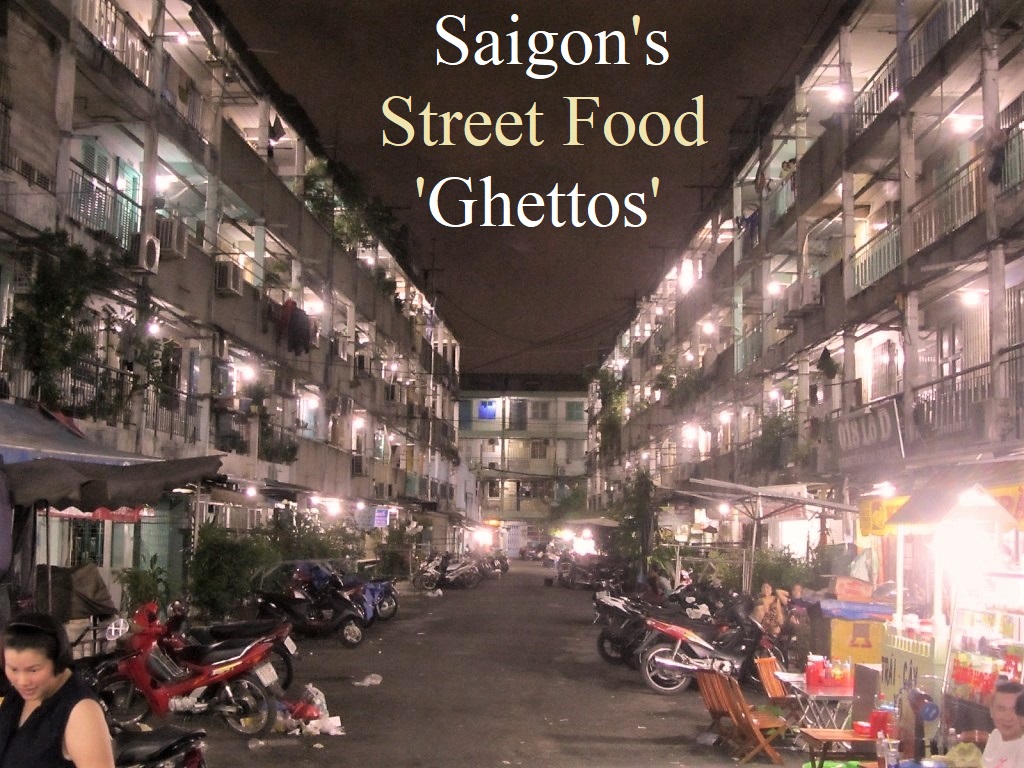 Although there are several other Street Food Ghettos in Saigon, the following three are my favourites. I’ve given each of the ‘ghettos’ a name and plotted them on my map. I’ve written a description of each one, including some specific places to eat within the ‘ghettos’. However, the best way to experience the ‘ghettos’ is to explore on foot; walking the grid of alleyways between the crumbling blocks, stopping to eat and drink anything that looks good, and striking up banter with local residents. There’s a certain pathos in the knowledge that almost all of Saigon’s Street Food Ghettos are slated for demolition in the near future. 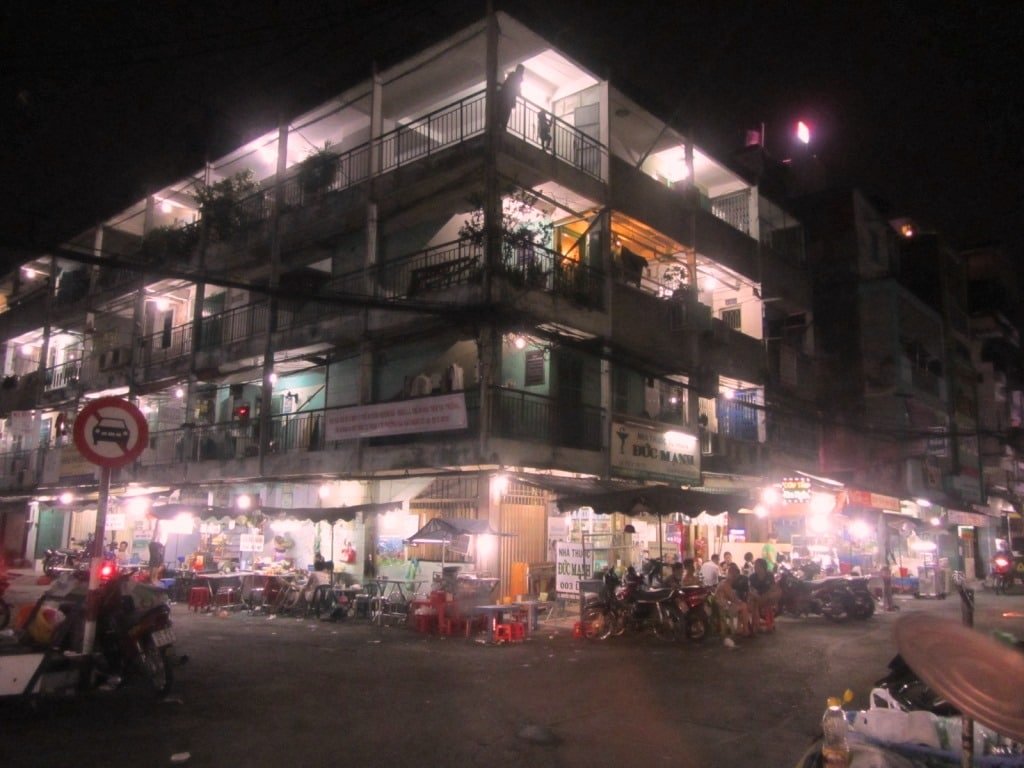 To the west of downtown Saigon, a sprawling maze of old apartment blocks fills the space between Ly Thai To and Nguyen Thien Thuat streets. Accessed via alleyways leading off the main streets, this complex consists of several squat concrete apartment blocks; each one about four storeys high with white fluorescent lights illuminating the corridors and stairwells, which run around the perimeter of the buildings. A very large community lives in these grey and aging blocks, and most of them seem to spend their evenings outside on the bumpy, potholed lanes which lead between the blocks. There’s a rich variety of street food on offer here and, because the housing is so distinctive, it feels like a ‘special zone’; a secret compound within the city limits; a ‘colony’ of street food vendors. 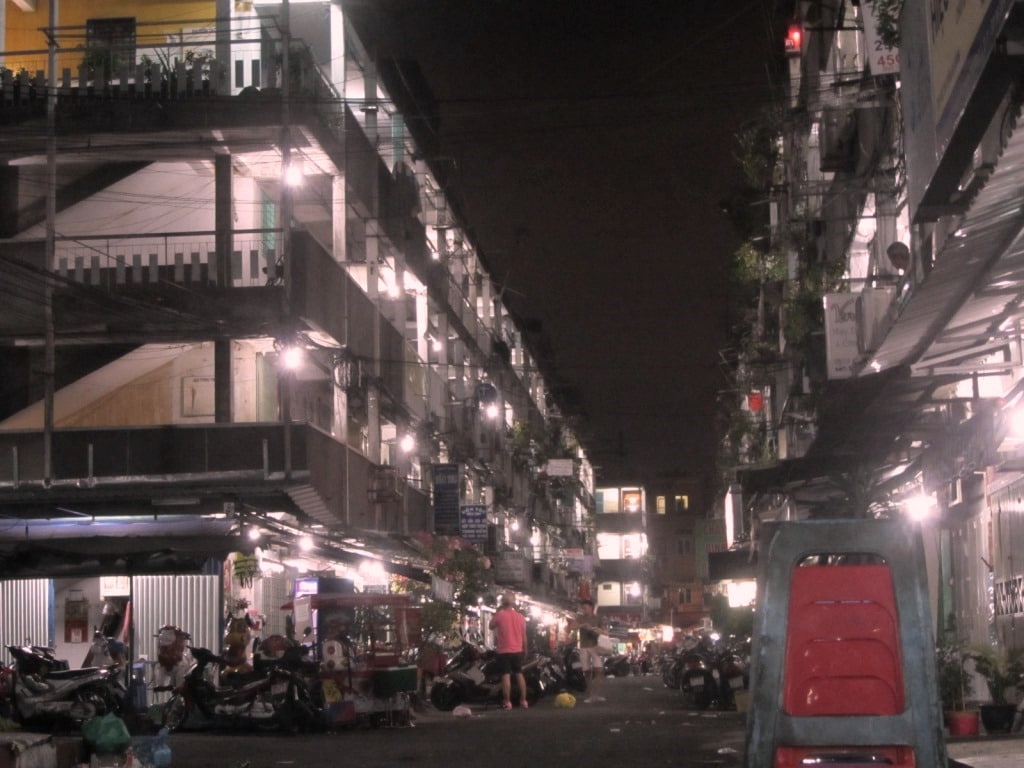 Living conditions appear to be fairly rough, but the streets are alive with food and chatter, creating a familiar sense of community that Vietnamese neighbourhoods often have. There’s an eerie but compelling ‘otherness’ about this place. It’s possible to spend the whole evening strolling through the labyrinth of apartments; from one street stall to the next; from a bowl of fish soup to a glass of milk tea; from a plate of crispy fried noodles to a cup of warm soy milk. Prices are reasonable, people are friendly and all age groups roam these streets at night. It’s a great alternative to the glitz and glamour of District 1 which, although just a few minutes away, could be in another time zone. 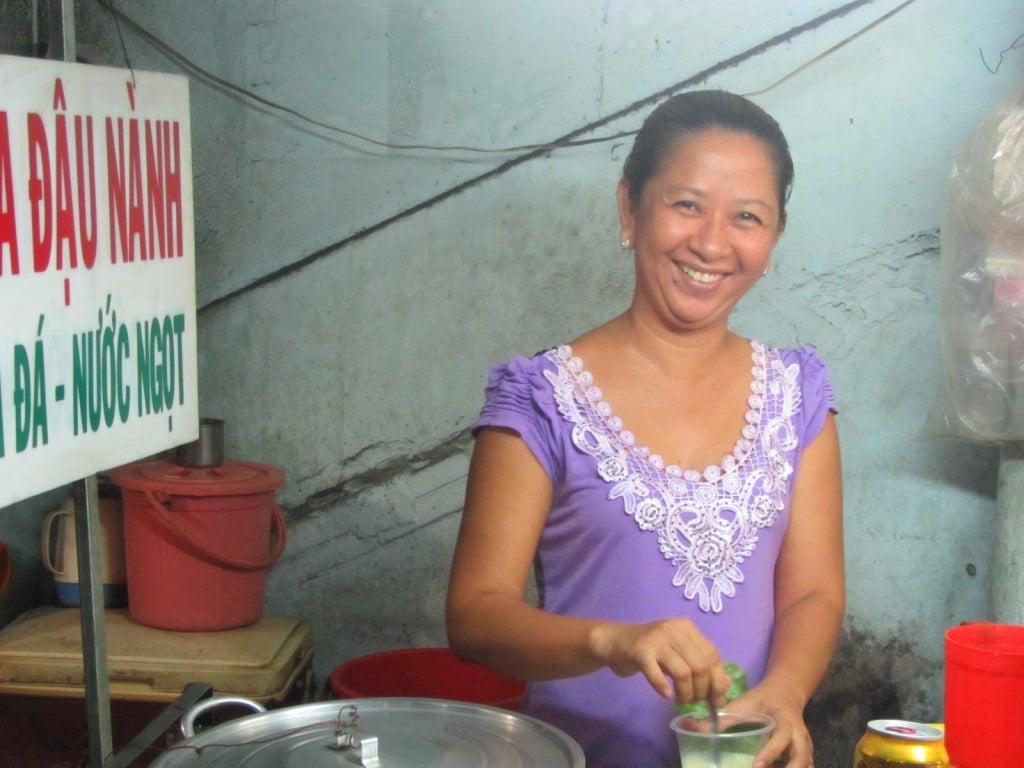 Either side of Thanh Da Street, after Cau Kinh Bridge, District 2 [MAP]

In the north of the city, Thanh Da Island is formed by a canal which cuts out an arcing meander of the Saigon River. Offering respite from the clamour of central Saigon, the island has long been slated for ‘big things’. This will include demolishing the large complex of battered four storey apartment buildings which straddles either side of Thanh Da Street, just after crossing the bridge onto the island. Although spreading east and west of the road, the east-side apartments have the more lively street food scene. The crumbling concrete blocks have been left to rot for years, because residents know that demolition is imminent but have never given a specific date. Windows are flung open to circulate air around the stuffy apartments; laundry hangs on the metal grilles which bar most of the windows; and bright fluorescent light bulbs pierce the night from living rooms. Living conditions appear to be basic but not squalid. There’s always a breeze here – rare and very welcome in Saigon – thanks to its location by the broad sweep of the Saigon River. 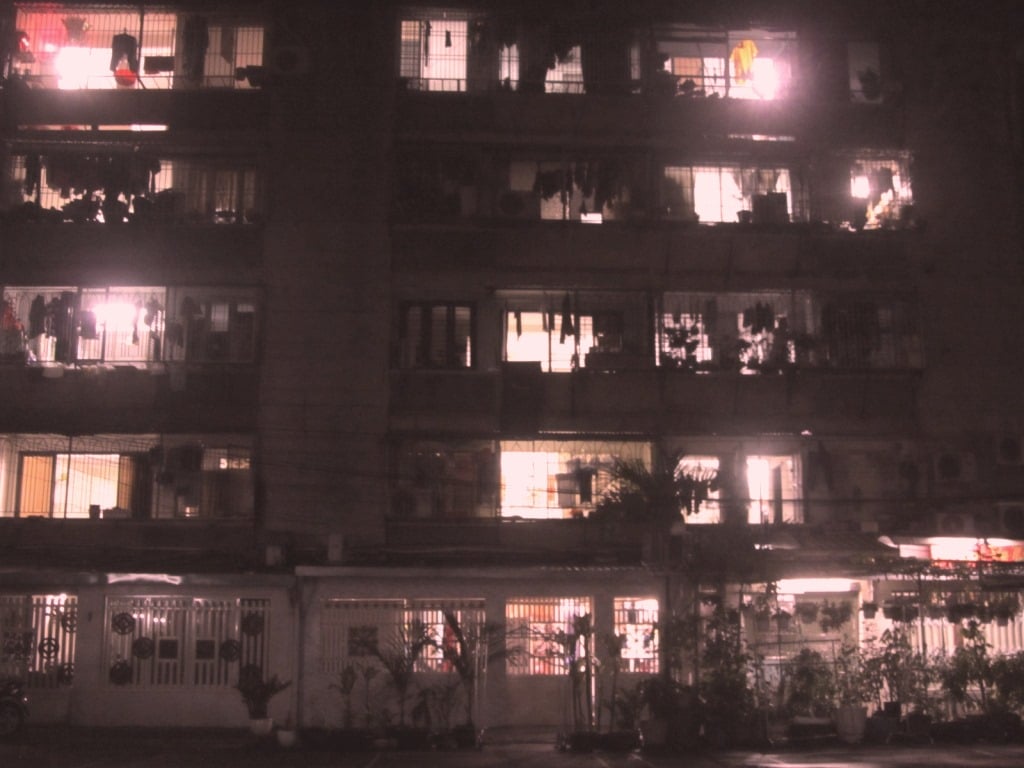 While life doesn’t look too fun inside the apartments, it’s alive and well on the streets below. Dozens of noodle shops, rice eateries, cafes, beer restaurants and tea stalls set up on the ground floors of the buildings and the narrow streets between the blocks. Several restaurants offer decent dining, sitting outside under the apartments on plastic chairs in the relatively cool nighttime air. Tuck into tiny clams fried in lemongrass and chilli and served on a crispy rice cracker (hến xào sả ớt bánh đa), and spicy beef grilled in a length of bamboo (bò nướng ống tre) at Quán Bảo Duy, for example. It’s particularly nice to wander down to the waterfront cafes, where you can get a sweet, sugary, syrupy, milky concoction of the type so popular with Saigon teens at the moment, and take it out to sit on the banks of the river, watching the lights of the city play in the ripples of the water. 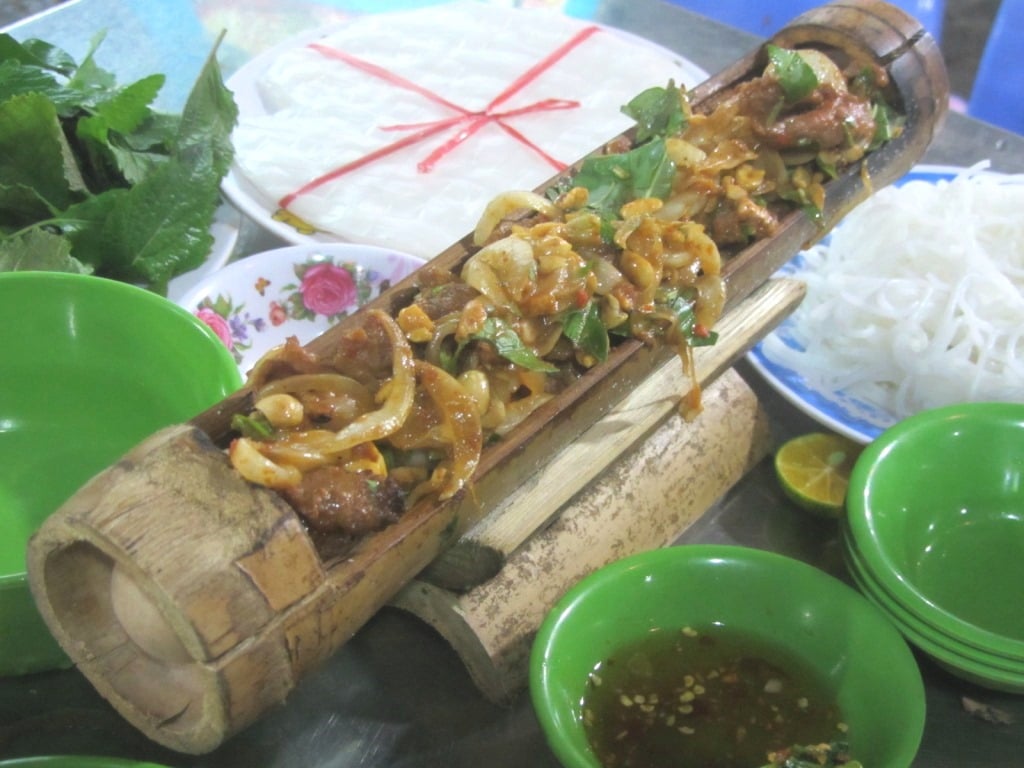 Lemongrass & chilli beef, grilled in a length of bamboo at a local eatery in ‘The Island’ complex

The ‘Daddy’ of all Saigon’s Street Food Ghettos, this old apartment complex covers a vast area, consisting of at least a dozen, long, four storey, concrete blocks. There’s a lot of street buzz here on any night of the week. It’s particularly popular with Saigon’s street food savvy youngsters, who share the sidewalk eateries with an older population of apartment residents. According to locals, this complex was constructed in 1971 with American money: some suggest it was ‘guilt money’; a way of giving something back to Saigonese before the US withdrawal in ’73. The apartments are in a photogenic state of disrepair: peeling plaster, dark, dank stairwells, wooden shutters, metal grilles, broken window panes. The epitome of urban decay, this is the kind of place that trendy bars and clubs in the West attempt to recreate with ‘industrial chic’ design and decor: but here in Saigon, this is the real thing; no artifice, no pretension. 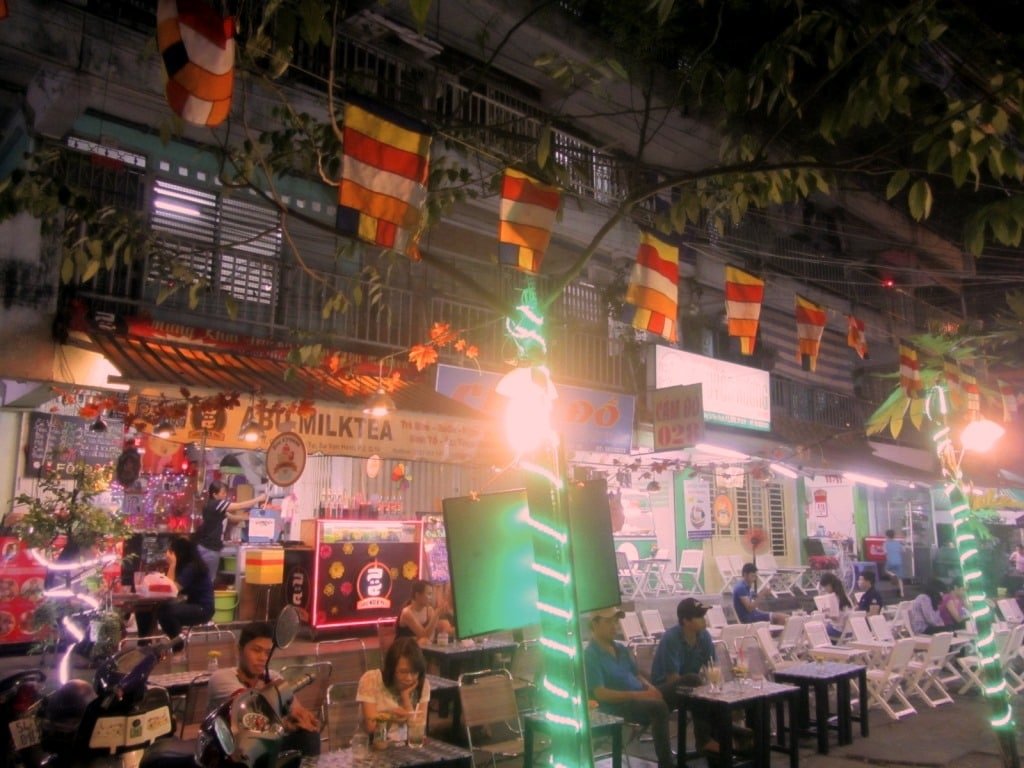 The largest of all the ‘ghettos’, ‘The Hive’ is packed with street food stalls and young diners

The street food scene and the apartment buildings stretch all the way from Su Van Hanh’s intersection with Hung Vuong Street in the south to Ba Hat Street in the north. But the most exciting section is the area around the intersection of Su Van Hanh and Hoa Hao streets, which I like to refer to as, ‘The Hive’. Hundreds of diners drift through the smokey, pork-scented air, seeking out their next street-side snack. The clink of beer glasses over plates of shellfish, the roar of fires beneath cooking vessels, the blinding light of colourful signage, the discarded detritus of dining-related matter: it’s a heady and intoxicating mix. There’s a great variety of dishes to choose from: try the famous chè (Vietnamese dessert) at Khánh Vy, or the excellent baguettes at Bánh Mì Kim Dung at the corner of Hoa Hao and Duong Lo 1 streets. In the last couple of years, some of the apartment blocks (and the street food stalls that they housed) have been demolished, and new 25 storey apartments (with no street food) have been constructed in their place. This is a trend that’s set to continue. 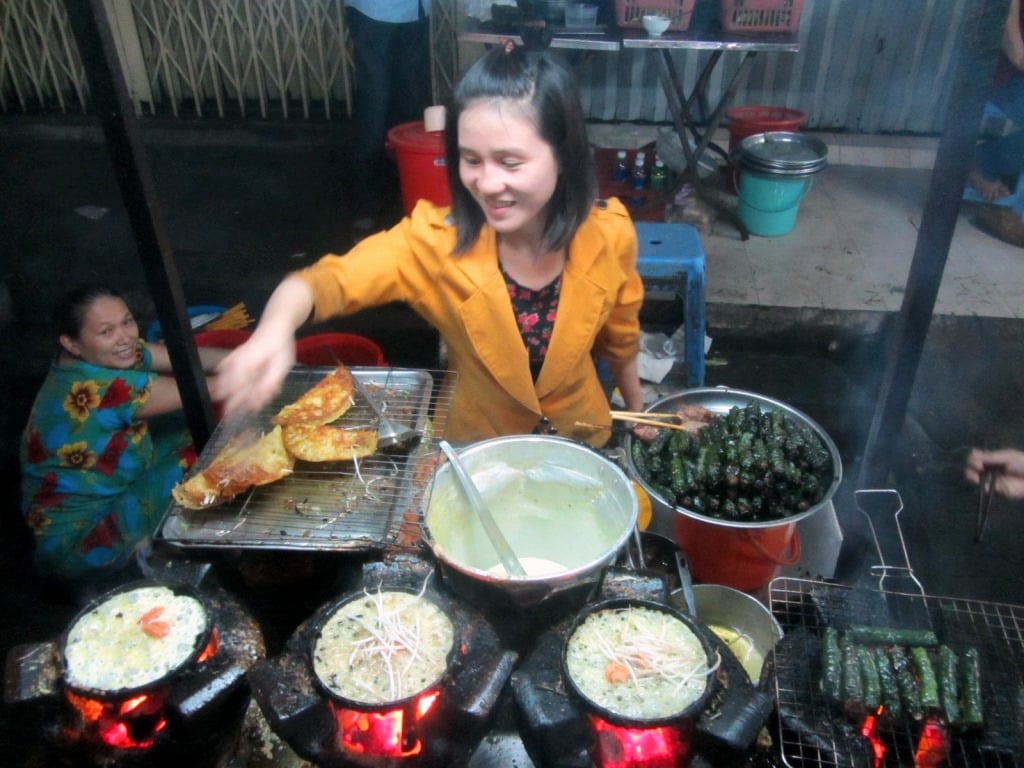 • The Saigon River: A Guide: