Visit Now, Before this Beach is Gobbled Up by Developers

Vung Bau Beach is one of the last vestiges of undeveloped beachfront on the northwest coast of Phu Quoc Island. This beach, lapped by the sapphire-blue waters of the Gulf of Thailand that slowly eat away at the exposed roots of whispering casuarina trees – is a reminder of what Phu Quoc’s western shore was once like, just a few years ago, before development began in earnest. Vung Bau is a long arc of good, fine sand backed by thick forest. For now, there are only a handful of small resorts and a couple of new, high-end developments. But most of Vung Bau Beach is still undisturbed. However, this is likely to change very soon, and when it does, there’ll be nothing left of the long, 15km stretch of public beachfront (and the forests that bordered it) between Cua Can village, to the south, and Ganh Dau Cape, to the north.


*Please support Vietnam Coracle: All my content is independently researched & financed. I never receive freebies of any sort in exchange for positive reviews or listings. If you use the links or search boxes on this page to book your accommodation, I make a small commission (at no extra cost to you). All my earnings go straight back into this website. Thank you.

Before development began, just a few years ago, the whole of the northwest coast looked like this

Not long ago, a red dirt road started from the fishing village of Cua Can, leading all the way north along the deserted coastline, past Vung Bau Beach, and on to the long stretch of empty sand that was once Dai Beach (Bãi Dài). The latter has since changed in the most dramatic fashion: the rain forest that reached right to the waters’ edge was bulldozed, the dirt road closed off, and foundations dug deep into the sand, in order to make way for the construction of what is now Vinpearl Land, an enormous complex consisting of a water park, golf course, safari, resort, residences and more. Needless to say, Dai Beach is now only accessible to Vinpearl guests, who pay hundreds of dollars a night for the privilege. And now, there are rumours that Vung Bau Beach, too, is to be acquired by Vinpearl, and consumed in much the same manner as Dai Beach before it.

For now (November 2019), Vung Bau Beach only has one significant development on its shores. Newly opened, Fusion Resort occupies the central section of the bay. This sprawling, all-inclusive, high-end development is likely a sign of things to come. But either side of Fusion Resort, the long sands of Vung Bau Beach stretch beneath the casuarina trees. A paved lane leads from Cua Can village to the southern tip of Vung Bau. Here, the dirt road has been closed off to bikes and vehicles. But it’s still possible to park and continue up the dusty beachfront lane on foot, through the dappled sunlight of large tropical trees, and along the curving shoreline of Vung Bau, with its tall grasses swaying in the sea breeze, and empty sands inviting you to lay your towel under the shade of a tree, and idly pass the day on this glorious tropical beach. However, trash – washed on up the sands or left by previous visitors – ruins this otherwise beautiful bay. The dirt lane ends at Fusion Resort, so there’s no through access from the south of Vung Bau Beach to the north. It also appears that resort construction will soon begin on this southern section.

Vung Bau, so far spared from intensive development, is one of the loveliest beaches on Phu Quoc

From the north, Vung Bau can be accessed via a very rough dirt lane (not advisable, especially in wet conditions) or a new paved lane, leading directly from the main road (DT45) to Nam Nghi Resort, at the northern tip of the bay. Nam Nghi is another new, high-end development, including a tastefully appointed resort, the Tree House restaurant, and the Rock Island Bar. The latter sits on a private islet just offshore, accessed by boat from the resort’s pier. The bar is open to non-guests and is good for a cocktail at sunset, but be prepared for high prices. The lovely stretch of beach just south of Nam Nghi is where the original Vung Bau resorts are clustered. Although the dirt lane is in bad condition, this remains one of the nicest places to spend a few, isolated, tranquil days by the beach anywhere on Phu Quoc Island. There are several good-value, small resorts to choose from. However, I’d highly recommend Bamboo Cottages above the others. It’s a wonderful little set-up with real charm, character, great staff and, best of all, 100% solar powered. A couple of days here (or more) is a memorable experience. The other small resorts here are, in order of my own personal preference: Wild Beach Resort, Vung Bau Resort, Gold Sand Beach Bungalows, and Nam Phuong. 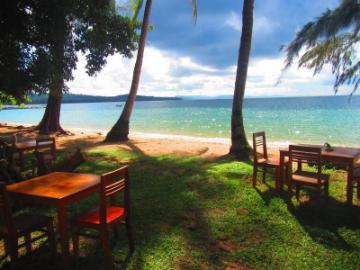 View of the beach at Vung Bau Resort, one of a clutch of good-value, small accommodations

It would be nice to think that there’s at least a chance Vung Bau Beach might be developed in a similar manner to, for example, Bamboo Cottages: with the local environment in mind, with a view to sustainability, green energy, and conservation of the natural setting. But it seems very unlikely that it will. Most probably, if indeed the land is acquired by Vinpearl or any other large developer, the forests will be cleared to make way for a gigantic integrated resort, towering over the beach, and costing hundreds of dollars a night. However, maybe that’s a good thing after all. Because, although I may praise the current lack of development on Vung Bau Beach, or write nostalgically about how the whole of the northwest coast used to be, I can’t ignore the fact that, like many of Vietnam’s other beaches, Vung Bau is in the process of being ruined anyway, regardless of large resort development. The reason for this is not big developers or bulldozers or trucks or local authorities: the reason for the ruin of many of Vietnam’s beaches is us: the traveller, the tourist, the visitor, and the local resident. Ever since Phu Quoc’s star began to rise, the condition of the beaches has gotten worse and worse with each year. The trash left behind by day-trippers or discarded by locals is appalling. It may not be you who has littered these beaches, but many, many people have done so. And this makes me think that maybe we don’t deserve beaches like Vung Bau: maybe they should all belong to large, high-end resorts, accessible only to those who can afford it, because only then, it seems, will the littering stop. Go to Vung Bau now, while you still can, and treat it well.

Trash left by day-trippers & residents is ruining Vung Bau Beach; perhaps development is the only way to save it

Disclosure: I never receive payment for anything I write: my content is always free & independent. I’ve written this review because I want to: I like this beach & I want my readers to know about it. For more details, see my Disclosure & Disclaimer statements here