Riding from Saigon to Hanoi by motorbike is probably the most popular road trip in Vietnam, and it’s unquestionably one of the best ways to experience the country. For years, travellers simply took the most obvious route: Highway 1. Today, however, thanks to ambitious road building programs, there are far more scenic, pleasant and less trodden ways to ride between the country’s two main cities. Having ridden south to north on numerous occasions (the first time, predictably, on Highway 1), I’ve put together the following 5 suggested motorbike routes from Saigon to Hanoi, so that travellers who are planning this road trip have more of an idea of the kind of options available to them. 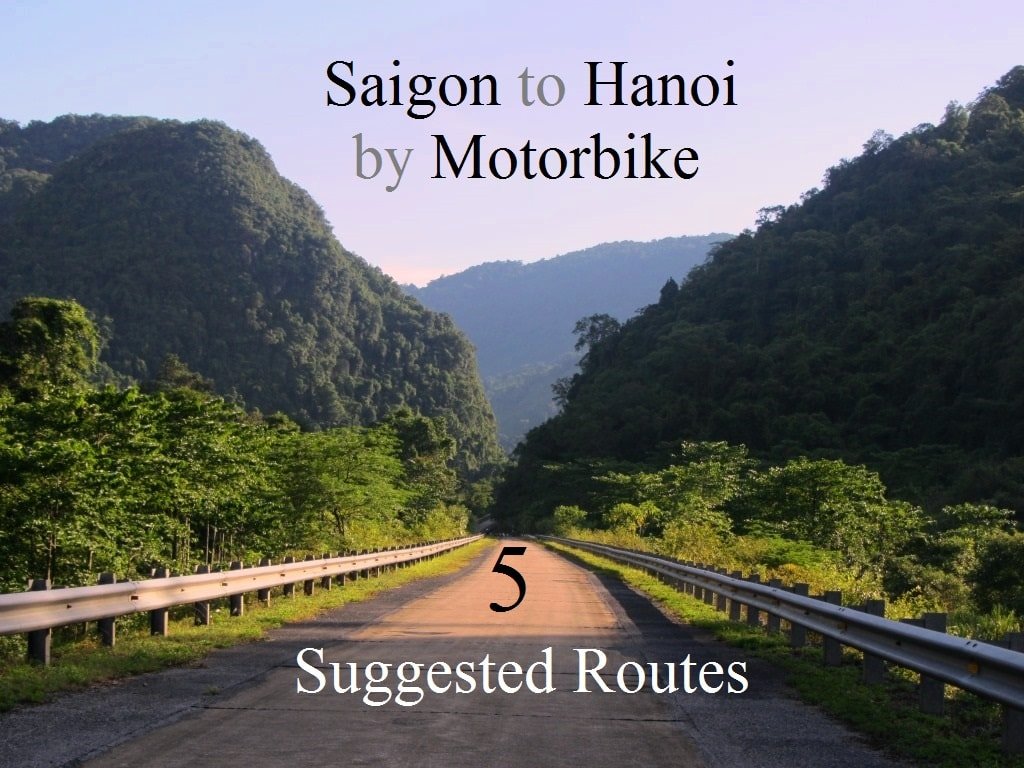 The main objective of these routes is to get from Saigon to Hanoi on good roads, passing good scenery, and avoiding traffic-clogged arteries, such as Highway 1, as much as possible. New roads are constantly being constructed, thus improving journey time and opening access to more parts of the country. The suggested routes below are based on my own experience of riding south to north. I’ve designed each route to suit the needs of different travellers; based on scenery and/or time frame. For each of the 5 routes I have: given it a name, written a short description and bullet points of essential information, illustrated it with an image, and plotted it on a map. The route maps include markers containing links to any Vietnam Coracle guides that are relevant to the route, where you’ll find more detailed information about that particular section of the road trip. For other useful resources that will help you plan your Saigon to Hanoi road trip, such as expenses and weather, see Related Posts.

IMAGE: The Classic route between Saigon and Hanoi 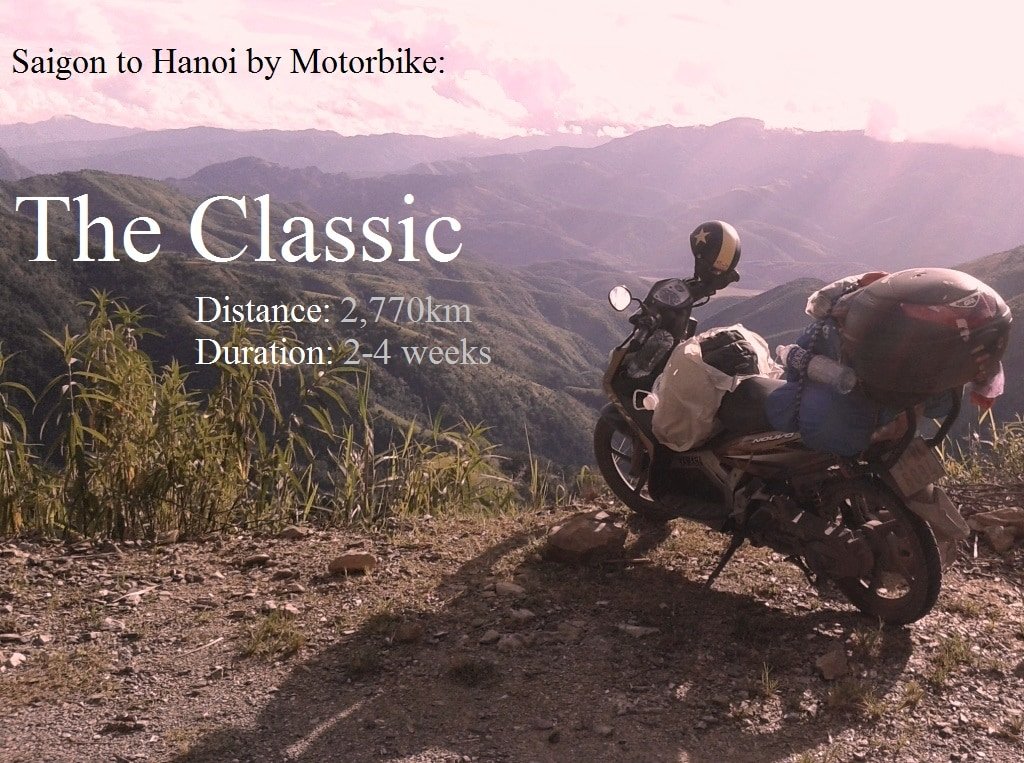 DESCRIPTION: Weaving a course between coast and highlands, The Classic route is equal parts beach and mountain. Quiet, stunning coastal roads in the south and central provinces yield to a mighty landscape of limestone karsts on the Ho Chi Minh Road in the north-central region. Popular towns and sights, such as Mui Ne, Dalat, Nha Trang, Hoi An, the Hai Van Pass, Phong Nha Caves and Ninh Binh are all covered; but so too are off the beaten path areas, such as the beaches around Quy Nhon, the coastal back-roads north of Hue, and the Western Ho Chi Minh Road. It’s the perfect balance of must-see sights and hidden gems. Zoom in on the map below and click the map symbols for links to my guides to specific locations. Enjoy the ride!

IMAGE: The Beach Bum route between Saigon and Hanoi 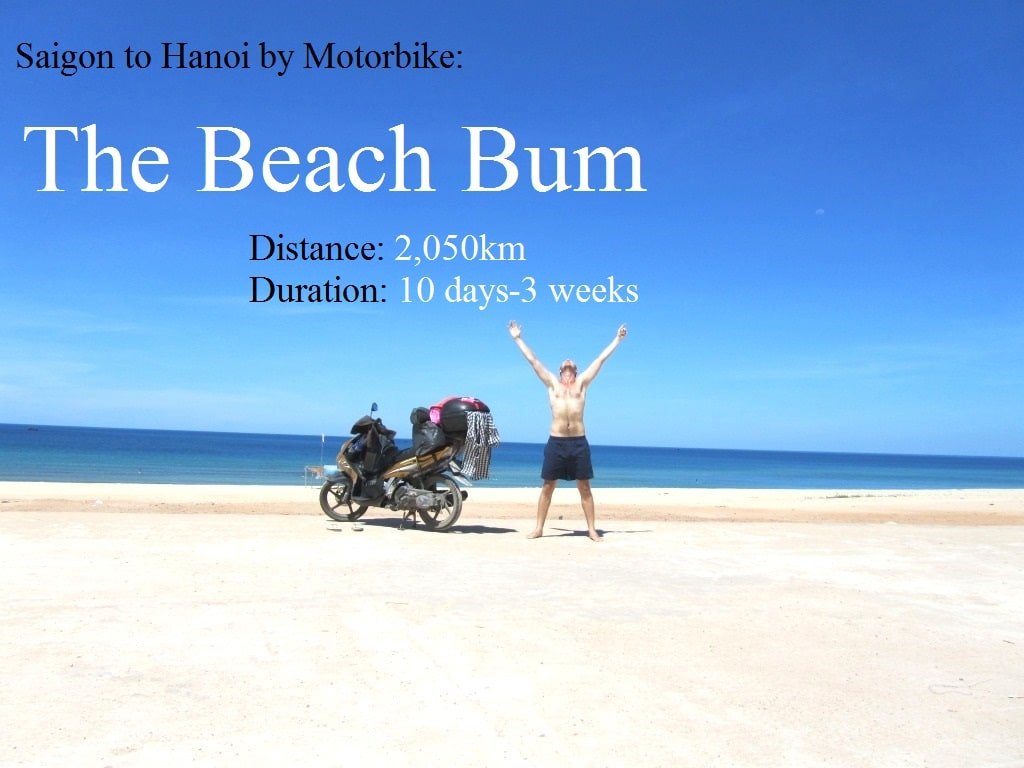 DESCRIPTION: Echoing Vietnam’s curving coastline for nearly 1,300km, this is the route to choose if you enjoy sand between your toes, playing in the surf, and the sound of the sea at night. Avoiding Highway 1 for most of its course, The Beach Bum route uses jaw-dropping new coast roads and rarely-ridden coastal back-roads to take you to countless deserted beaches, sleepy fishing villages and hedonistic beach towns. Calling in at established beaches, such as Mui Ne and Nha Trang, this route also covers up-and-coming coastal regions, such as Phan Rang, Cam Ranh and Quy Nhon, where the sand and sea are almost completely undisturbed. When the beaches lose their gloss in the north-central provinces, this route takes to the hills along the Ho Chi Minh Road, for a good dose of limestone magic, including the caves at Phong Nha. Zoom in on the map below and click the symbols for links to my guides to specific beaches and coast roads. Enjoy the ride! 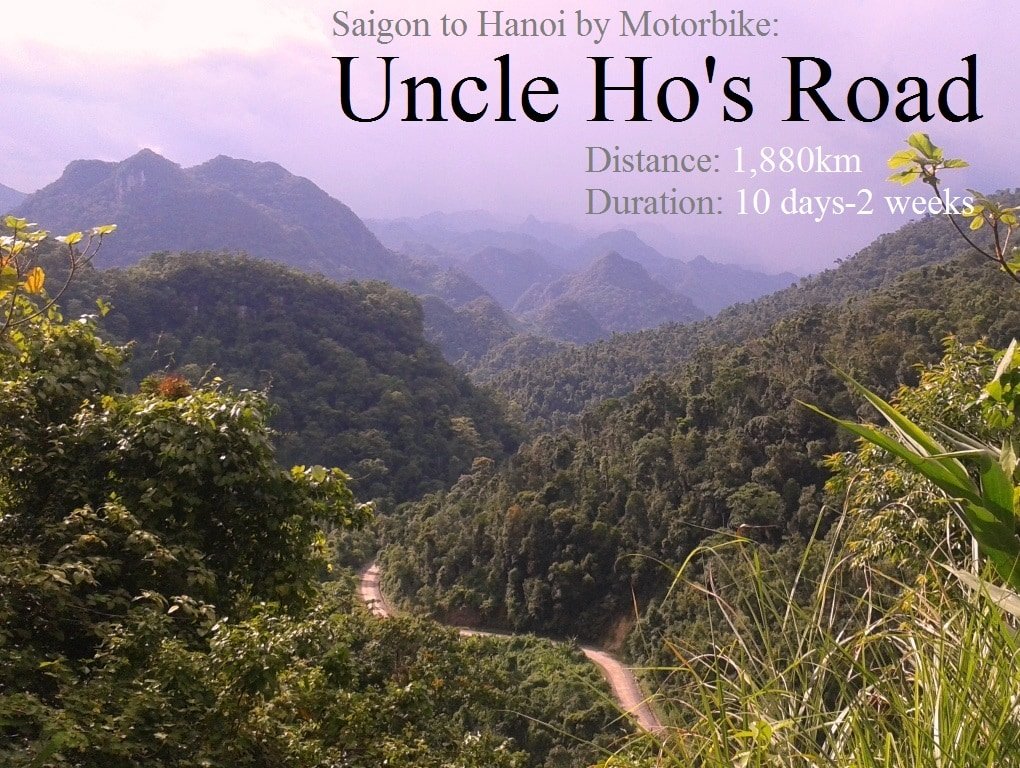 DESCRIPTION: Surely one of the most evocative road names in the world, The Ho Chi Minh Road is now a fully paved passage from the south of Vietnam to the north. Uncle Ho’s Road might be the shortest route in this list, but it’s also the most mountainous; following the Truong Son Range, which forms the jagged, high-peaked spine of Vietnam. From vast agricultural plateaus, where tea and timber grow in equal number, to the ragged edge of the frontier lands along the border with Laos; from teetering passes above roaring rivers on the western branch-road, to the limestone wonderland at its northern ‘neck’: you’ll bear witness to some of the most dramatic scenery Vietnam has to offer. Sparsely populated for much of the route, some thriving cities (such as Buon Ma Thuot) and charming towns (such as Kon Tum) offer human interaction, as do the multitude of ethnic minority hamlets lining the way. Geological wonders abound, punctuated by war vestiges with hauntingly familiar names, like Khe Sanh. Enjoy the ride!

IMAGE: The Big One: the scenic route between Saigon and Hanoi 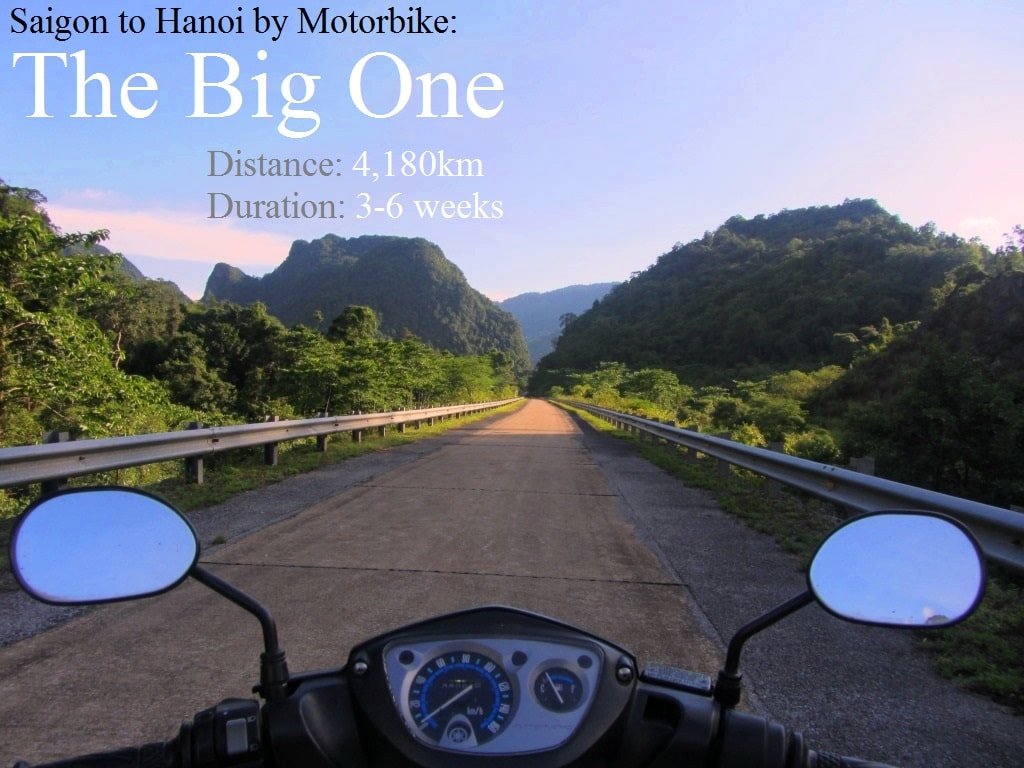 DESCRIPTION: If time is no object, and you want to see everything there is to see between Saigon and Hanoi, both on and off the beaten path, The Big One has it covered. This meandering route zigzags up the country on mountain passes, coastal back-roads, the Ho Chi Minh Road, and new national highways, to create a road trip of epic proportions. Taking in all the best beaches in southern and central Vietnam, twisting through remote valleys in the Central Highlands, corkscrewing through limestone forests on the Western Ho Chi Minh Road, and following shimmering rivers from source to mouth; this is the definitive south to north route. Major towns and tourist hotspots, such as Nha Trang, Dalat, Hoi An, Phong Nha Caves and Ninh Binh, are woven into this itinerary to balance all the off-the-grid exploration. Don’t forget to zoom in on the map below and click the symbols for links to my guides to specific regions and sights. Enjoy the ride!

IMAGE: The Easy Rider route between Saigon and Hanoi 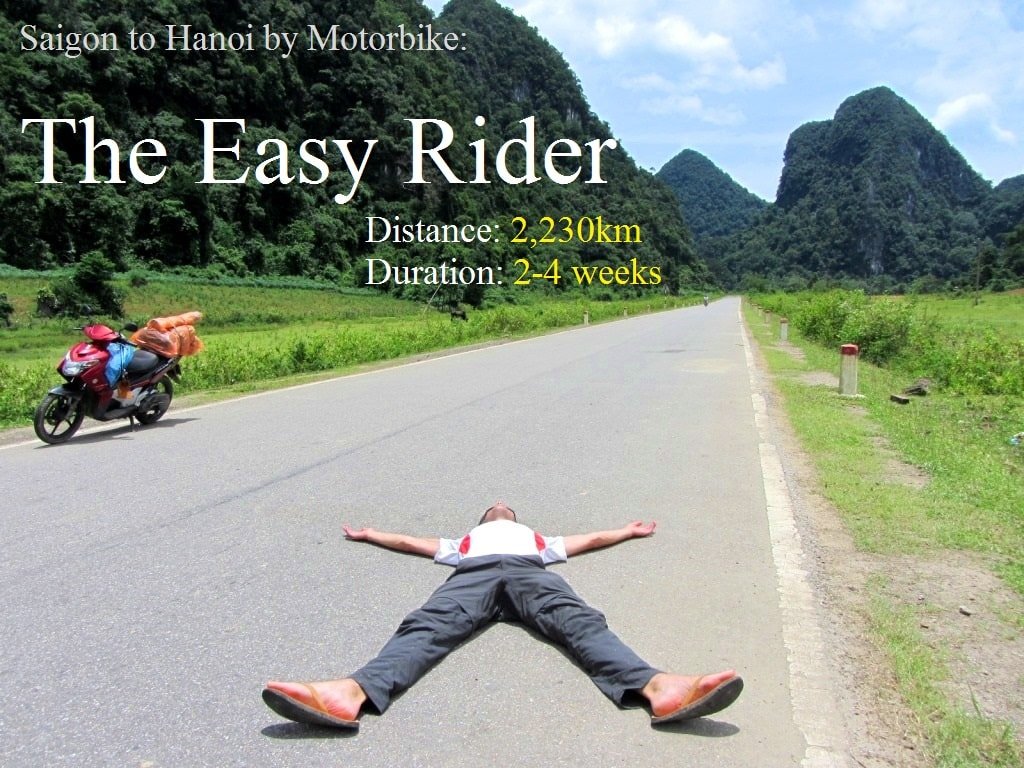 DESCRIPTION: Specifically designed for travellers who want a less complicated (but no less scenic) passage from south to north, The Easy Rider route sticks to good-quality roads on a relatively direct route from Saigon to Hanoi which is easily navigated. Switching from coast to highlands on several occasions, this route threads an arcing path through some of Vietnam’s most attractive eye candy: Dip your toes in the southern waters of Mui Ne, Nha Trang and Quy Nhon; escape to the cooler climes of mountain towns such as Dalat and Kon Tum; enjoy the cultural delights of Hoi An and Hue, connected by the Hai Van Pass; and gaze in awe at the limestone dreamscape of the Phong Nha Cave system and along the Ho Chi Minh Road. This is a good, time-saving alternative to The Classic route. Make sure you zoom in on the map below and click the symbols for links to my guides to specific sites along the way. Enjoy the ride!

•  Expenses for a Road Trip:

•  23 Differences from South to North Vietnam:

This is the story of my GIVI bike box, bearer of my baggage on all my road trips. Convenient, secure, durable and stylish, my bike box has allowed me the freedom to go anywhere and see everything, which is what motorbiking is all about….

A week ago, my motorbike (known affectionately to me as ‘Stavros’) turned 13 years old & the odometer ticked over to 200,000km….