This post was last updated 5 years ago. Please check the comments section for possible updates, or read more on my Updates & Accuracy page.

Unlike some Vietnamese soups, mì quảng hasn’t yet found fame on the international foodie scene, but within Vietnam’s borders it’s a much-loved noodle dish that’s available throughout the country. In particular, mì quảng is a favourite of Western expats living in Vietnam. Originally from the central province of Quảng Nam, mì quảng (literally ‘noodles from Quảng Nam’) is distinguished by its thick yellow noodles and shallow broth. Regional differences aside, for me a good bowl of mì quảng is defined by its noodles first, broth second. In Saigon, Mì Quảng 85 has got the noodles just right (although the broth is another story) and that’s why I love it. 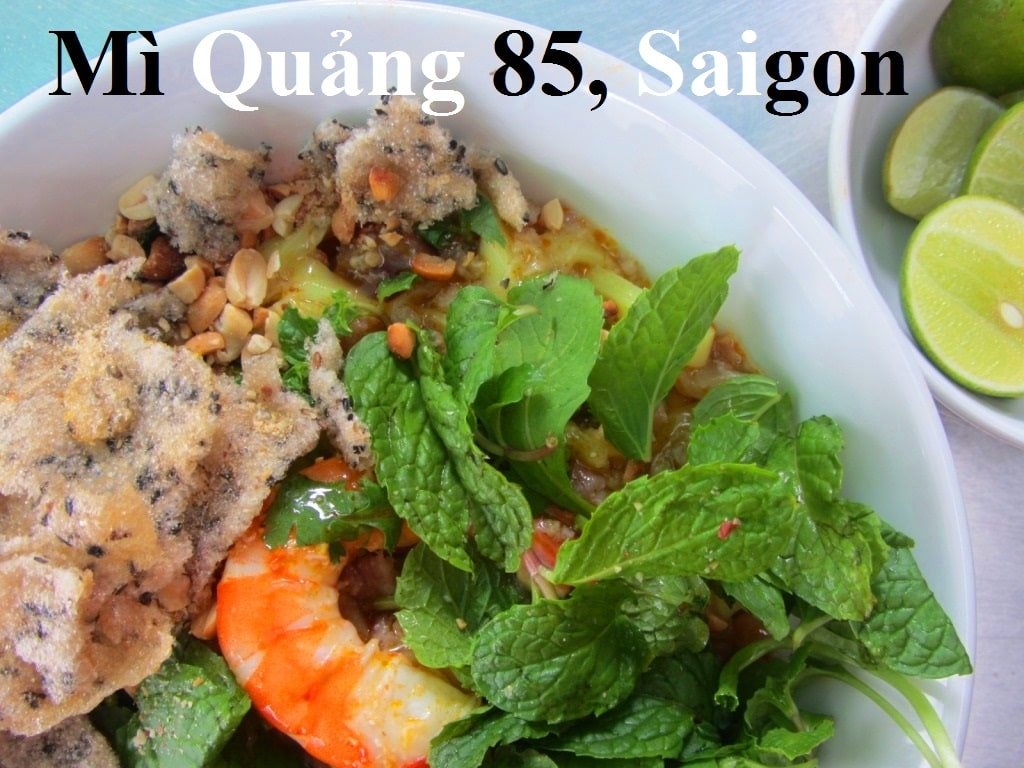 Just before Tran Quang Dieu Street hits the Thi Nghe Channel in Saigon’s District 3, a small road turns off this horrible, traffic-filled bottleneck and into a shady area below one of the city’s many crumbling old apartment blocks. Between the road and the apartment, Mì Quảng 85 noodle house occupies the ground floor of a bright, newly painted house. A long red awning reads ‘Quán 85’. It’s not difficult to find.

The lady in charge is Ms Y. Originally from Vinh Long, in the Mekong Delta, she’s been serving noodles here for 20 years. Her and a close-knit entourage of conical-hatted helpers dish out several different noodle soups, but the mì quảng is what this place is best-known for. It’s a popular spot and, like almost everywhere in Saigon, it’s changed quite a lot over the years I’ve been eating here. Where once there were plastic tables and chairs sprawled along the sidewalk and spilling into the street, now most of the seating is on wooden stools and wooden tables in an open-sided shopfront with just a few metallic tables outside on the pavement. It’s a neater, less chaotic set-up than in the past, but there’s still that distinctive and appealing ‘feeding time’ buzz at mealtimes, when everyone is impatient to get their bowl of noodles. 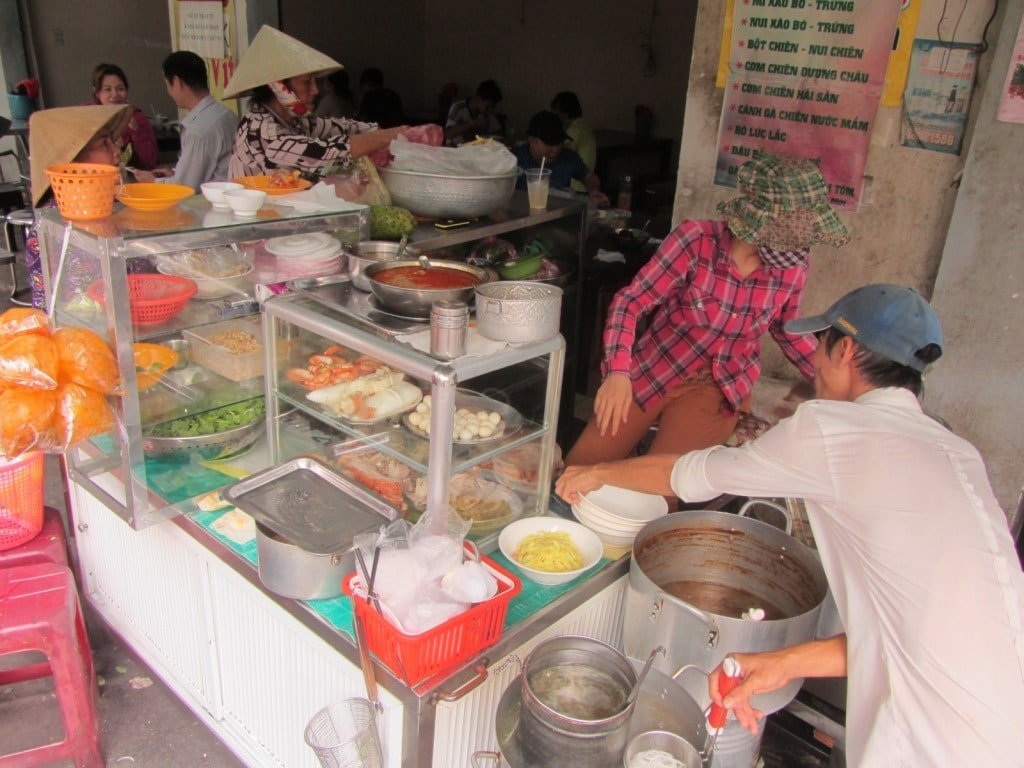 Rush hour: service picks up at mealtimes at Mì Quảng 85, when customers are impatient for their noodles

You can order your mì quảng in various ways, but for the classic version just ask for mì quảng đầy đủ – essentially a bowl with a bit of everything in it. In the white porcelain bowl you’ll find: a big, crunchy sesame seed rice cracker, a nest of thick yellow noodles, slices of buttery pork belly, a bright red shrimp, a boiled quail egg, blanched bean sprouts, shredded banana blossom, curls of shaved morning glory weed, sprigs of coriander, fresh mint leaves and peanuts, all in a shallow salty-sweet broth. 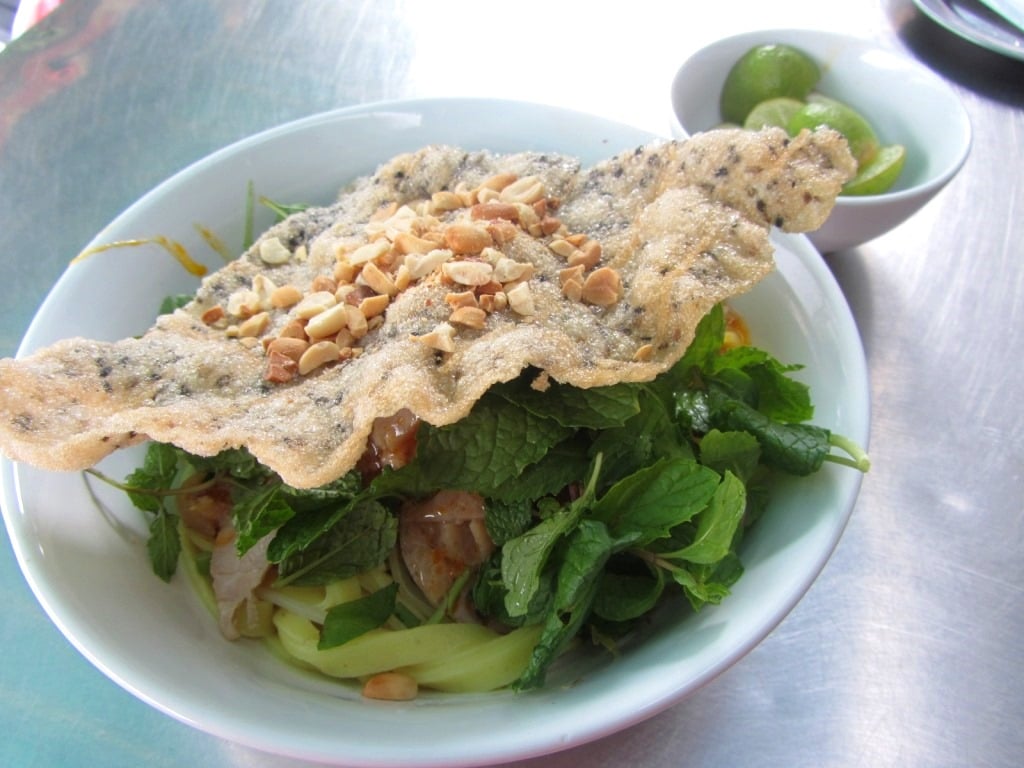 Lunch: a bowl of mì quảng noodles (with a large sesame seed rice cracker on top) at Mì Quảng 85

Crumble the rice cracker into the bowl, squeeze in some lime, and mix everything in with the noodles and broth (it’s more of a sauce than a broth, so it needs to be stirred through in order to cover all of the ingredients in the bowl). As always, the colours, shapes and textures in the bowl look fabulous, but don’t wait too long to start eating, because otherwise the rice cracker will lose its crispness and become soggy. Dig your chopsticks into the noodles and pull them up to your mouth. 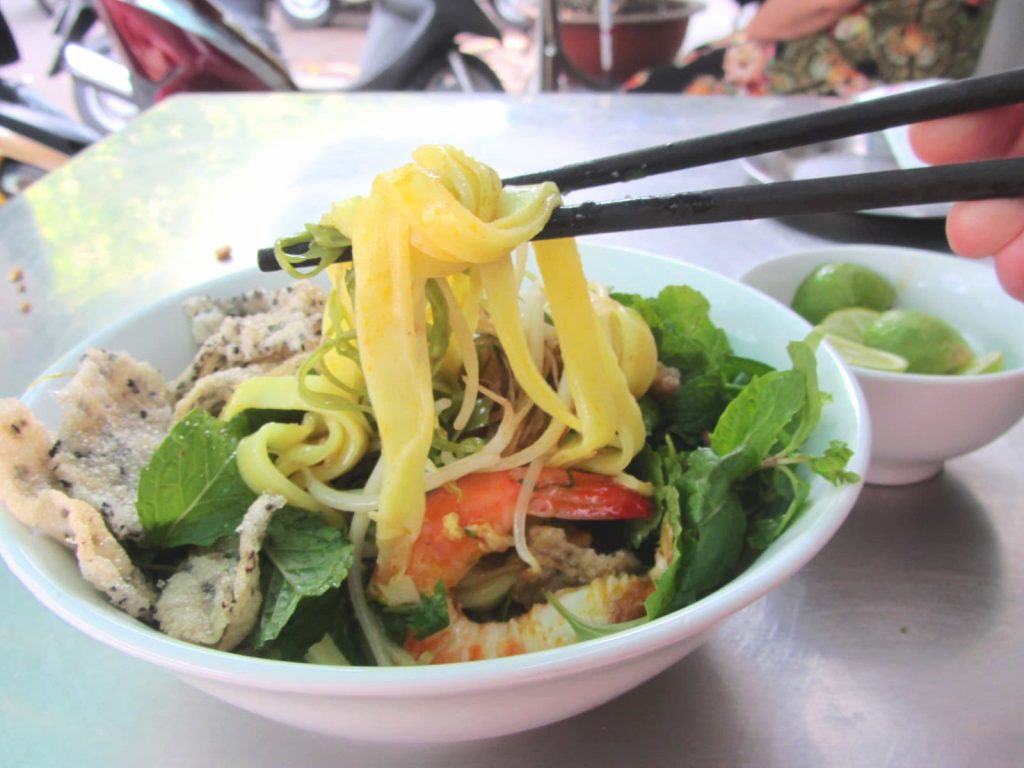 Dig in: the noodles are thick & yellow (as they should be) & the bowl is full of textures & colours

Texture-wise it’s got everything: a gymnasium for your teeth and tongue – crunchy, chewy, crispy, slippery, slimy. The noodles are thick and satisfying to bite into, and the vegetables, peanuts and rice cracker create a crisp, clean freshness, more like a salad than a bowl of noodles. One of the stars of this dish is the mint – it’s beautiful and makes me wonder why more Vietnamese dishes don’t utilize this menthol herb. 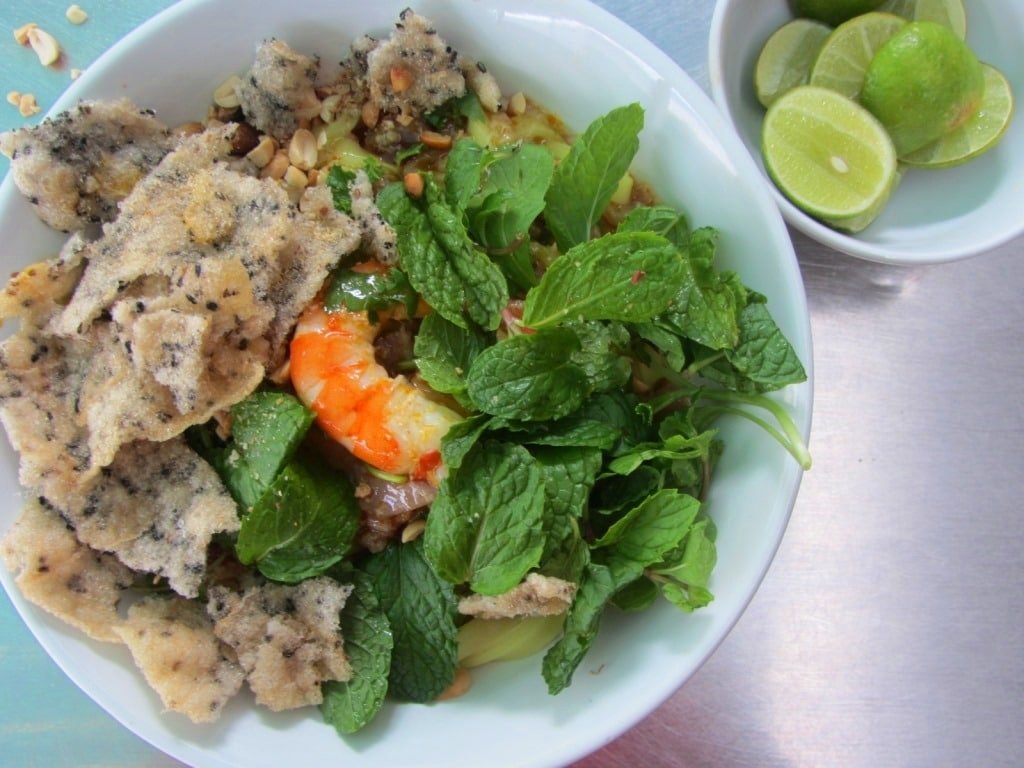 Despite scoring top marks for texture, colour, noodles, and freshness, the broth (or sauce) is too sweet and sticky for my taste. A squeeze of lime helps to reduce the sweetness, but ideally I want my mì quảng broth to be thinner and saltier. However, it should come as no surprise that this southern version of a central Vietnamese dish is sweet: it has, after all, travelled nearly 1,000km from its ‘home’ and is cooked by a chef hailing from the Mekong Delta, where food is famously sweeter than anywhere else in the country. Another element that I’m not entirely sure about is the coconut flavoured rice crackers. The cracker is fundamental to this dish, but coconut flavoured? It’s a bit too rich for me and feels like it belongs somewhere else.

So, if you’re a mì quảng purist, you might take issue with the regional riffs on the dish at Mì Quảng 85, but you’ll still enjoy the thick yellow noodles and the general freshness of ingredients. Personally, I find the overall sensation hugely satisfying…..even if it is too sweet. 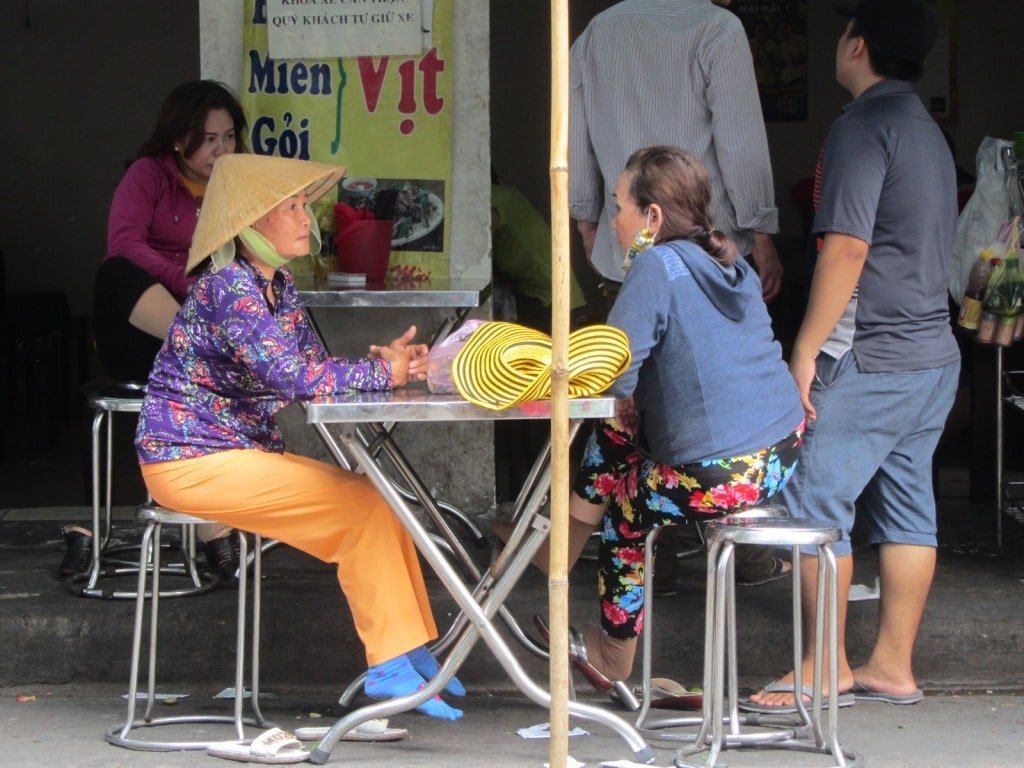 Disclosure: I never receive payment for anything I write: all my content is free and all my reviews are independent. I’ve written this review because I want to: I like this noodle house and I want my readers to know about it. For more details, see my Disclosure & Disclaimer statements here