First Rains: An Ode to the Monsoon

First Published May 2021 | Words and photos by Vietnam Coracle

More than a mere meteorological phenomenon, the first rains of the monsoon have symbolic associations and practical implications. Historically, the rains represented change and transition. But there’s also a cathartic element to the first rains; breaking the heat of the dry season and the build-up of dust in the air and on the streets: a cleanse. The coming of the first rains is the most dramatic and obvious seasonal shift in Vietnam. But more than that, monsoon downpours and tropical storms are, for a long-term foreign resident like me, the quintessential expression of the tropics, representing the exotic and the mysterious. A sublime spectacle of nature, for me the monsoon embodies the excitement and romance of living far from home. 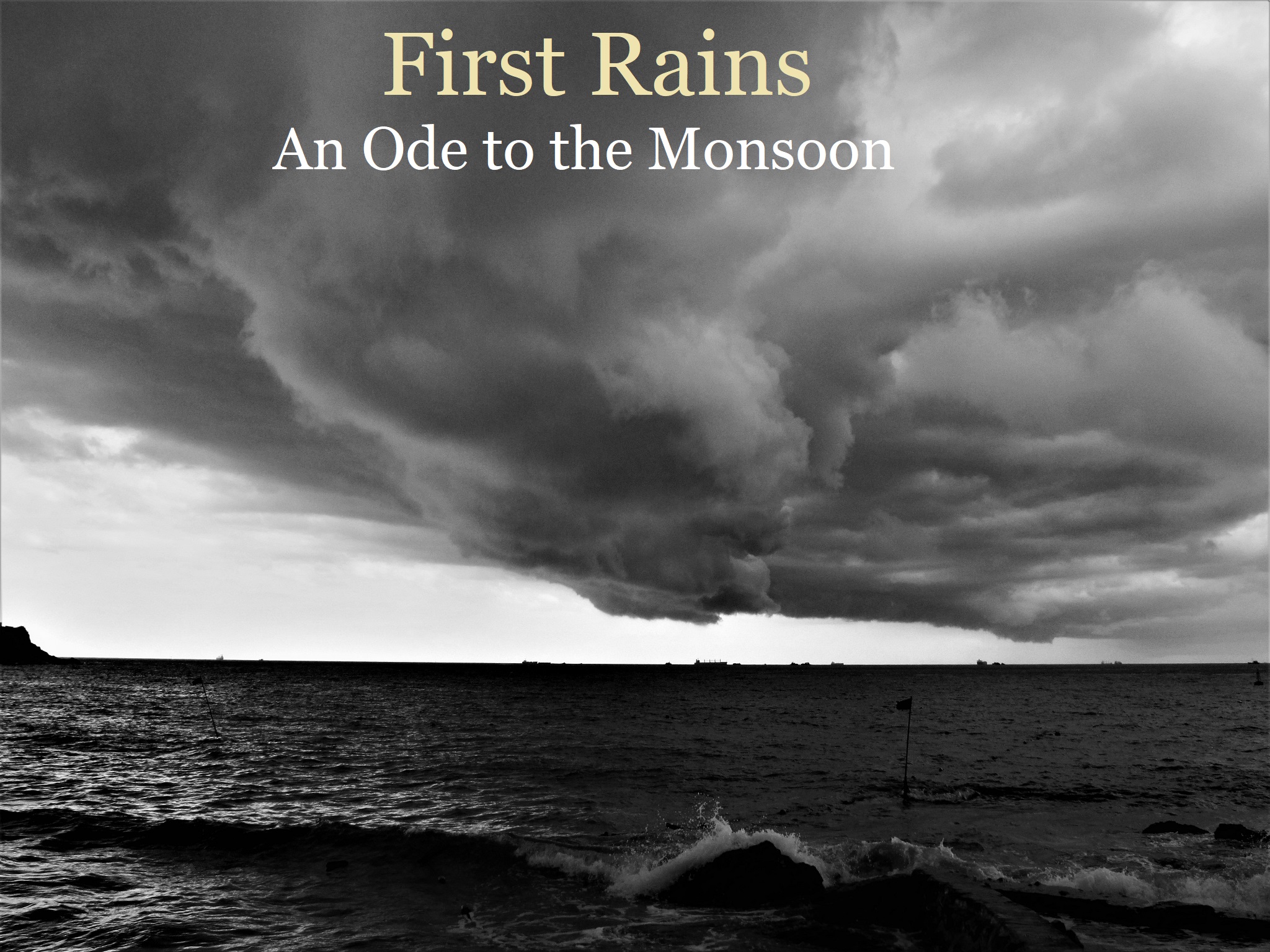 AN ODE TO THE MONSOON

For millennia, the coming and going of the monsoon rains – and the winds which accompany them – dictated the lives of farmers, sailors, merchants and traders, determining what they could grow, where they could sail, and where and how they lived. Like all seasonal changes, the monsoons were the annual clock by which people lived their lives. Although not bound to the monsoon in quite the same way as in the past, even today the rains play a significant role for people in Vietnam, both practical and metaphorical. In an urban context, the rains are sometimes seen as a nuisance, an inconvenience: the flooded streets, the traffic jams, the damp rides to work. But even for urban dwellers, the monsoon still has a certain romance: the feeling of coziness when inside looking out at the rains, the spectacle and theatre of a tropical downpour, the relative coolness that comes with a sudden shower. 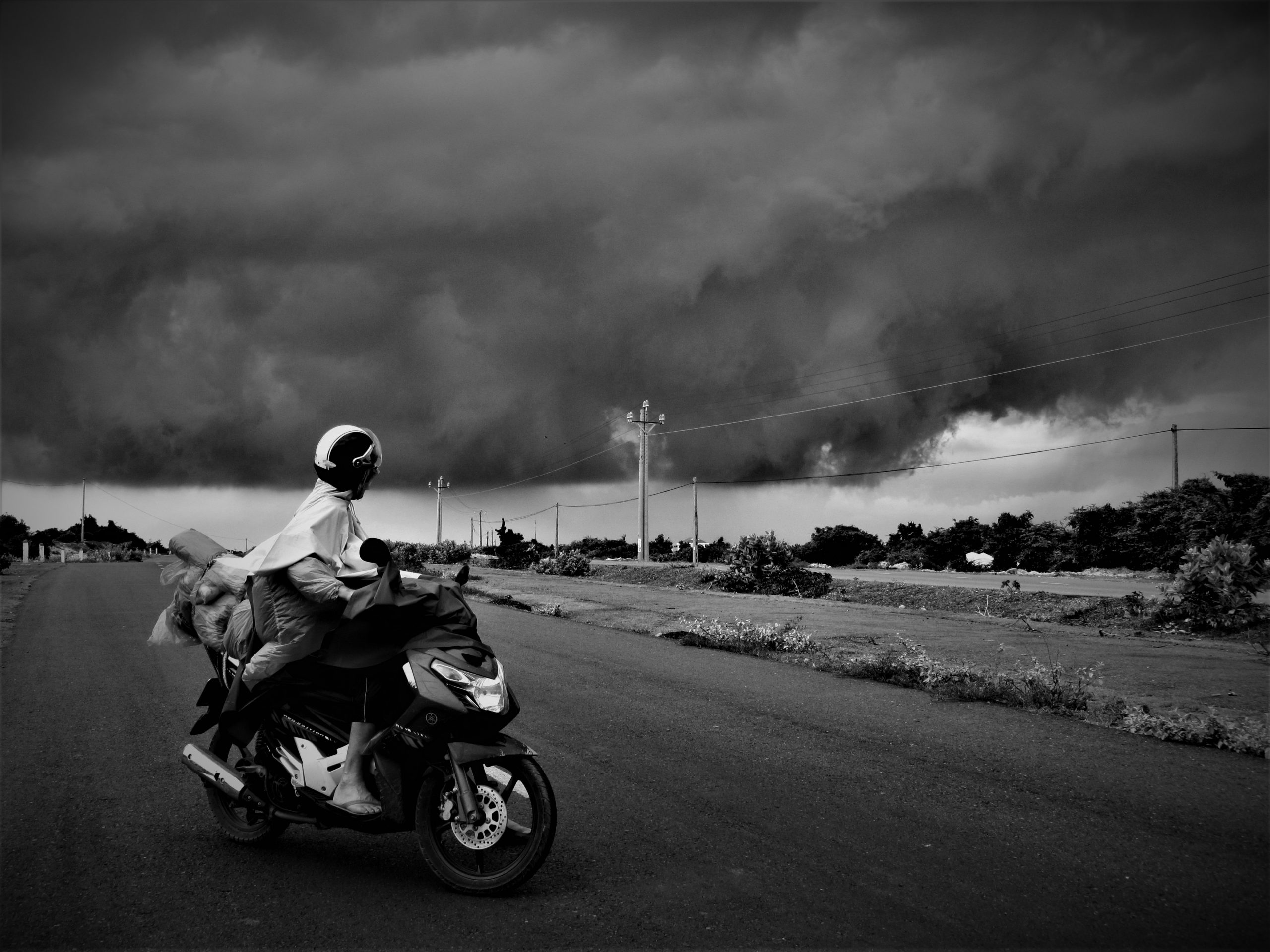 Vietnam has two monsoons. But, as a resident of Saigon (Ho Chi Minh City), my monsoon is the southern one, which generally arrives around April or May and lasts until October. This is known as the ‘southwest monsoon’ on account of the prevailing winds that blow in from the Indian Ocean, where the rising temperatures of the spring and summer months cause moisture from the sea to evaporate, forming giant bubbling clouds over southern Vietnam which burst over the vast flat fields of the Mekong Delta – swelling the great river’s many paths – and on the tarmac streets and concrete homes of Saigon, the cool mountains and forests of the Central Highlands, and the wide, windy beaches of the southern coast. 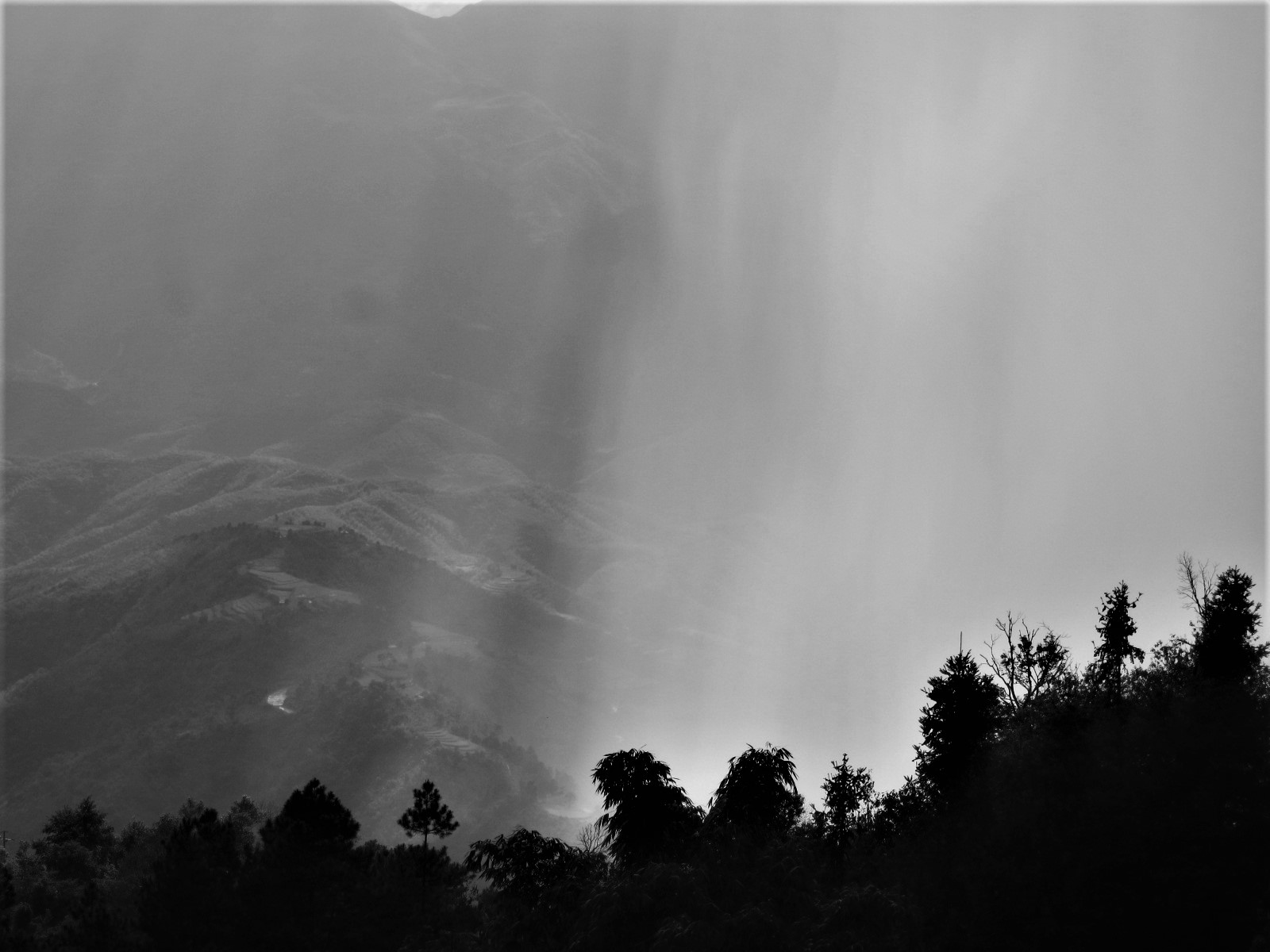 The rains are an event: a performance of nature. The build-up of heat, the clouds arching on the horizon – like buttresses to the sky – then blackening, losing their form, melting and collapsing in torrents: sheets, curtains, walls of rain: millions of fat, dense raindrops falling with an urgency and intensity, as if gravity were too weak a force for their journey. Even though the rains can be inconvenient and uncomfortable, I can’t help but be impressed by the drama of a downpour. I’m English. I come from a temperate climate with four distinct seasons, each of which has clear defining characteristics, none of which are particularly severe: the winters cold but not freezing, the summers warm but not hot, the rains frequent but not intense. When I came to live in southern Vietnam, where there are only two seasons – the wet and the dry – I instinctively looked for signs of seasonal differences: shifts in temperature, wind, changes in the foliage, humidity, quality of light. After a few years, I realized that, while there might only be two defined seasons, there are many subtle variations – ‘micro-seasons’ – between them. But the first downpour of the monsoon is the most obvious and dramatic of all these seasonal shifts. 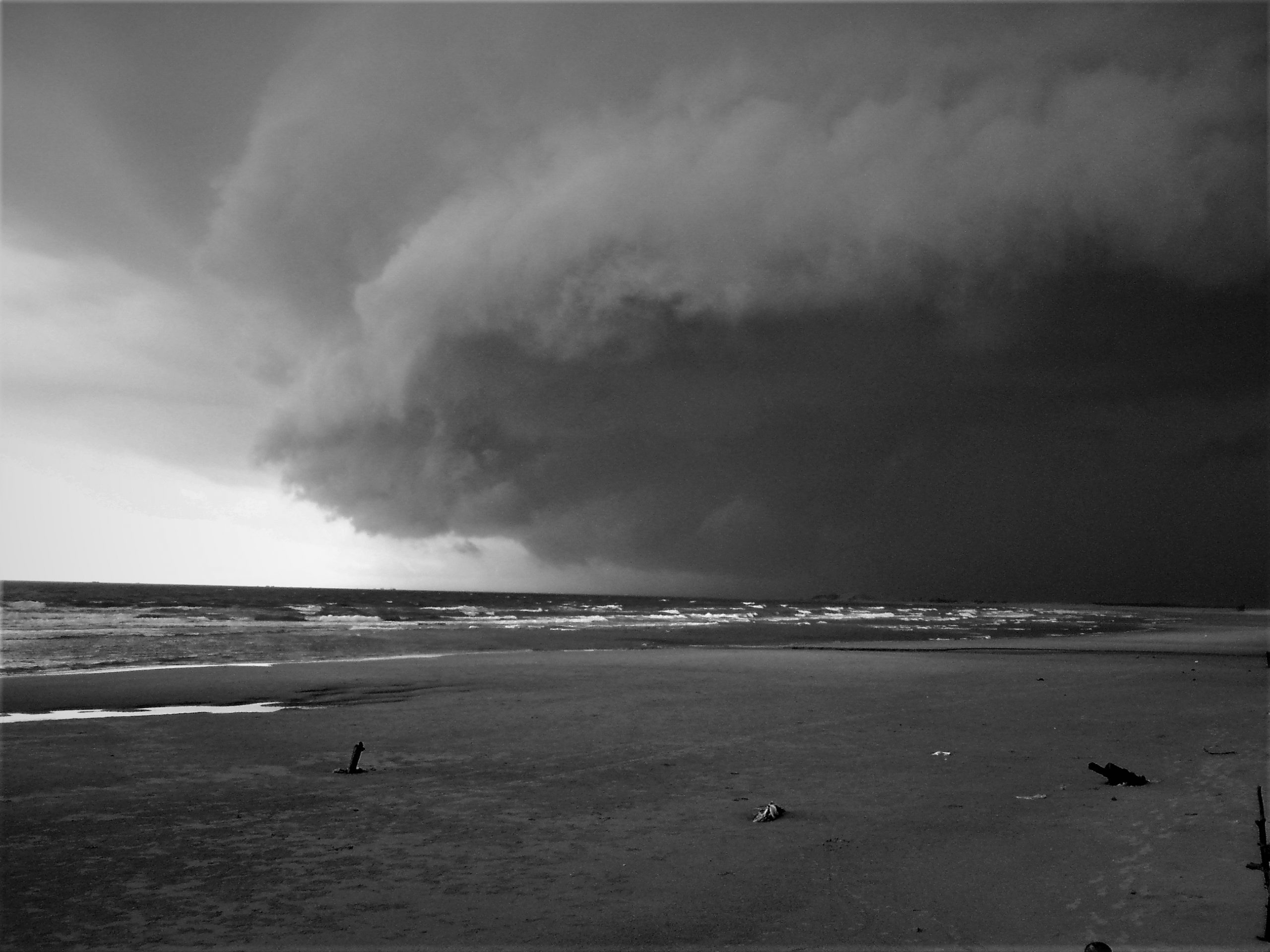 Thunder showers in the tropics have a character and charisma. Monsoon downpours feel like a form of communication between nature and humans. I remember a violent storm waking me in the dead of night in my hotel room on the riverfront in Ha Tien. The flashes of lightning were so bright they hurt my eyes, the thunder so loud it made me jump, the lashing rain so fierce it rattled the glass in the window frames. It was as if a god were desperately trying to pound some message, some lesson, some warning into whomever or whatever dwelled beneath this storm. Eighteen months later I was in the same hotel room at the beginning of a global pandemic. It’s easy to understand how storms were once interpreted as messages from a divine power. But, I suppose, they are a kind of communication. Each year in Vietnam the rains appear to get heavier, the storms more frequent, the flooding worse, the damage more serious, and the season longer than the previous one. It seems obvious that storms are, if not a warning from a deity, at least an indication that weather patterns are changing and that this will have consequences for us. 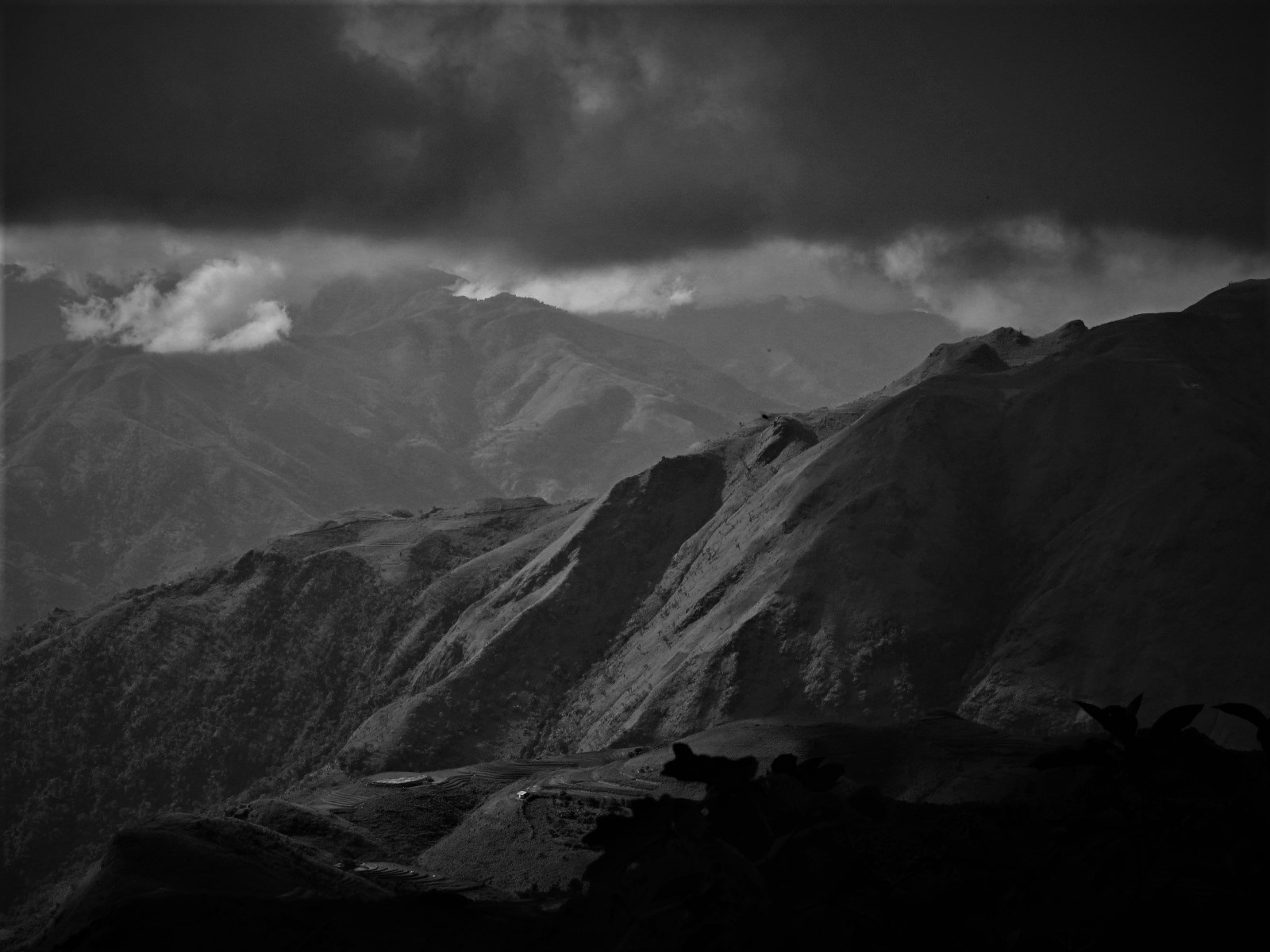 Monsoon cloudscapes are a sight to behold: an alternate realm of gaseous sculptures and martian shapes. Rainy season clouds (cumulus congestus – a name straight out of Harry Potter’s spellbook) build and grow on the horizon, mushrooming in the grey-blue sky, forming great vaporous cathedrals floating above the landscape. These imposing edifices brew and brood until oil-black and heavy, their towering tops flattening out to form anvils in the sky waiting to fall, thus completing the transition to cumulonimbus (storm clouds). Ever since I first saw these monsoon cloudscapes in my mid-teens, I wanted to live in a country that experiences them regularly. Rainy season clouds make the sky bigger, more fantastical, mysterious and grand; they’re at once threatening, theatrical and beautiful. Such is the drama of the skies in Vietnam during the rains. 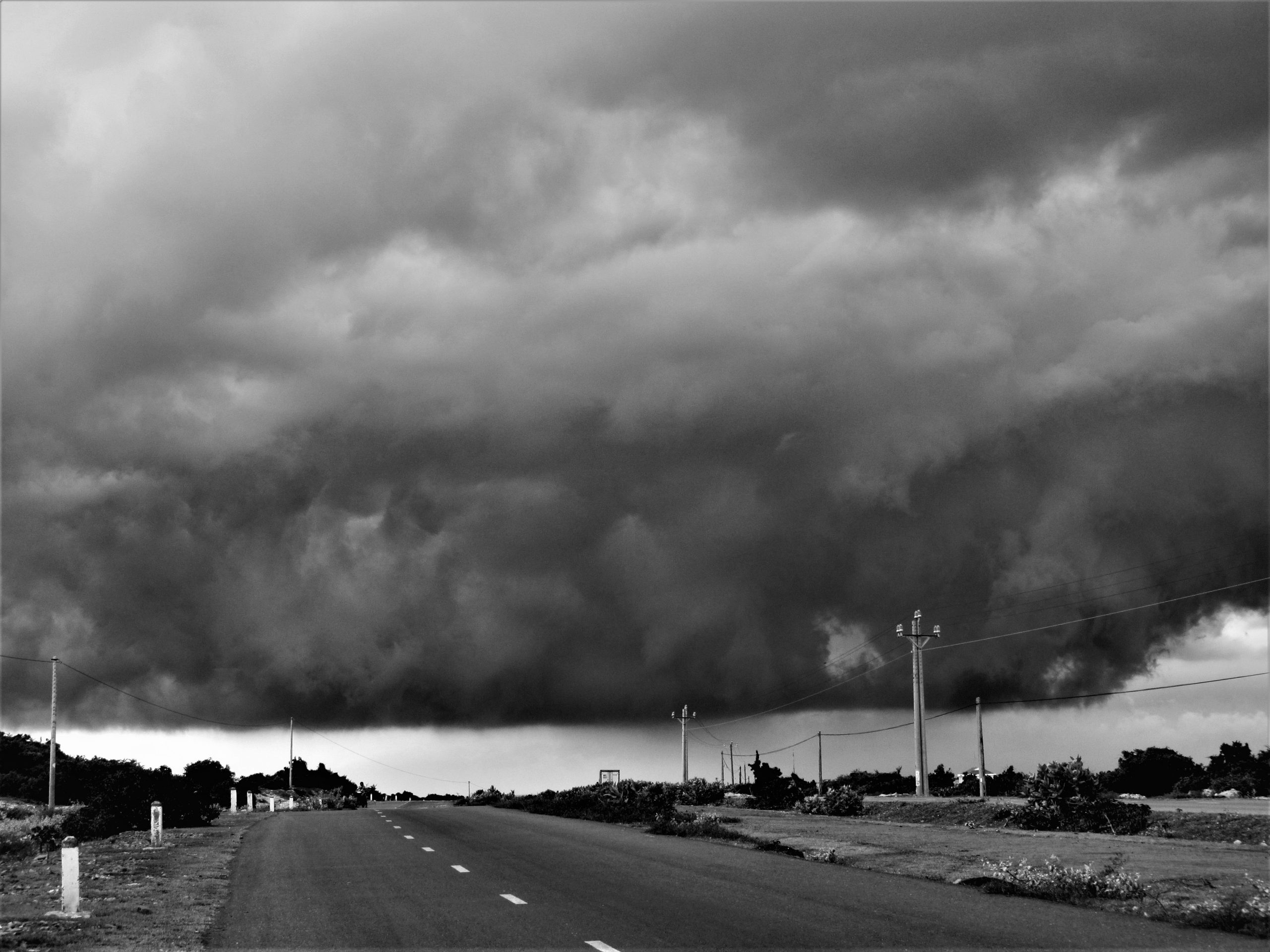 The very first time I can remember seeing Saigon, the city was in the grip of a tropical downpour. I was on a plane on approach to Tan Son Nhat Airport in mid-August, the height of the rainy season. Below, the city was monochrome. From my window seat I saw a thick curtain of rain sweep from one side of the city to the other, blurring out the entire metropolis, like a thumb drawn across a charcoal sketch, smudging the scene. 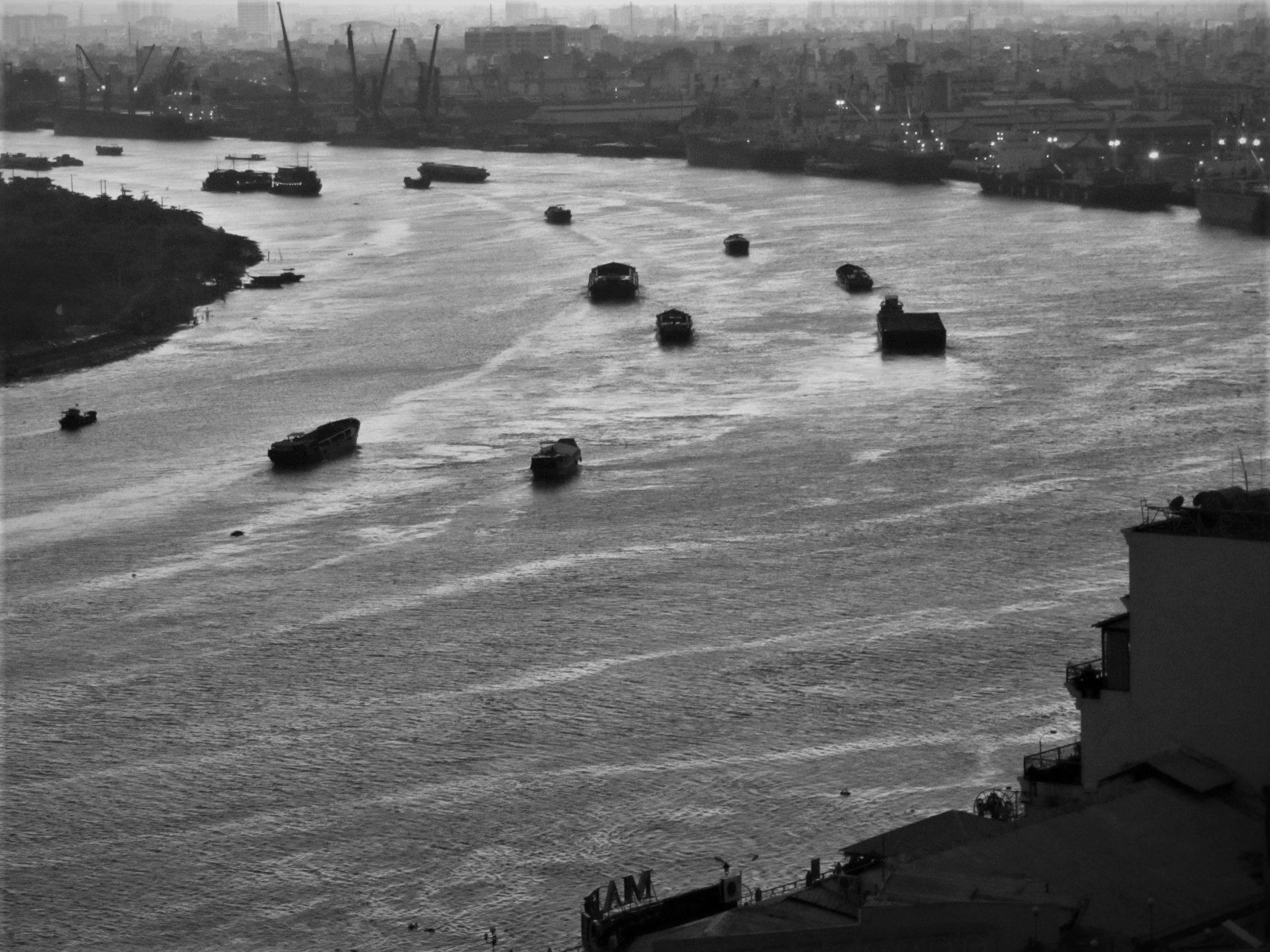 The sound of the rains is so loud that all other sounds cease to exist for the duration of a downpour. In the cities, the rain sizzles like oil in a frying pan as it falls on corrugated-iron roofs. But, as the intensity builds, a deep drumming ensues as the fat raindrops fall on hard, man-made surfaces, pounding concrete walls, tarmac roads, aluminium cars. In he countryside, the noise is softer, gentler: an intense whispering as the rain falls on natural surfaces – fields, earth, leaves, thatched roofs.

The rains release smells: in the countryside, the deep, nutty scent of damp soil and the vegetal, tea-like fragrance of wet undergrowth; in the cities, the noxious smell of drains and ammonia. 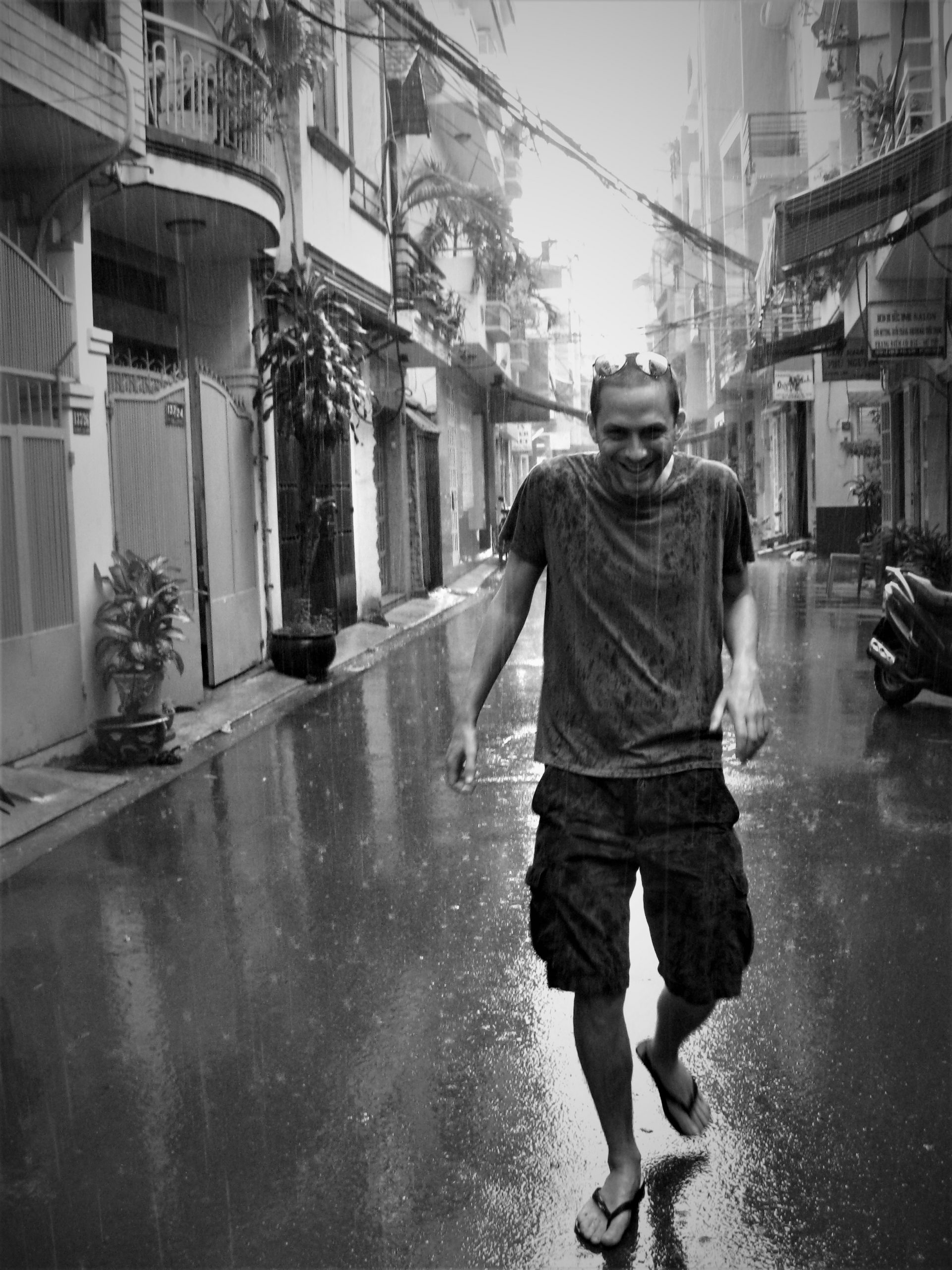 Just as suddenly as a downpour begins, so the rain stops. All the sounds of the city and the countryside fade back in: dogs barking, engines revving, horns tooting, frogs croaking; the purring of an electric fan, the rumble of an air-conditioning unit; people’s voices chattering indistinctly; cicadas, seemingly woken by the rain from their dry season slumber, hum everywhere, but remain invisible.

Despite the rains initially being a relief – clearing the air of heat and dust – once a downpour stops the humidity rises and the air is thick and soupy. The heat quickly returns, evaporating the moisture on the roads: the cities become saunas. One’s skin is constantly moist – even the slightest movement causes perspiration – and clothes cling to limbs. 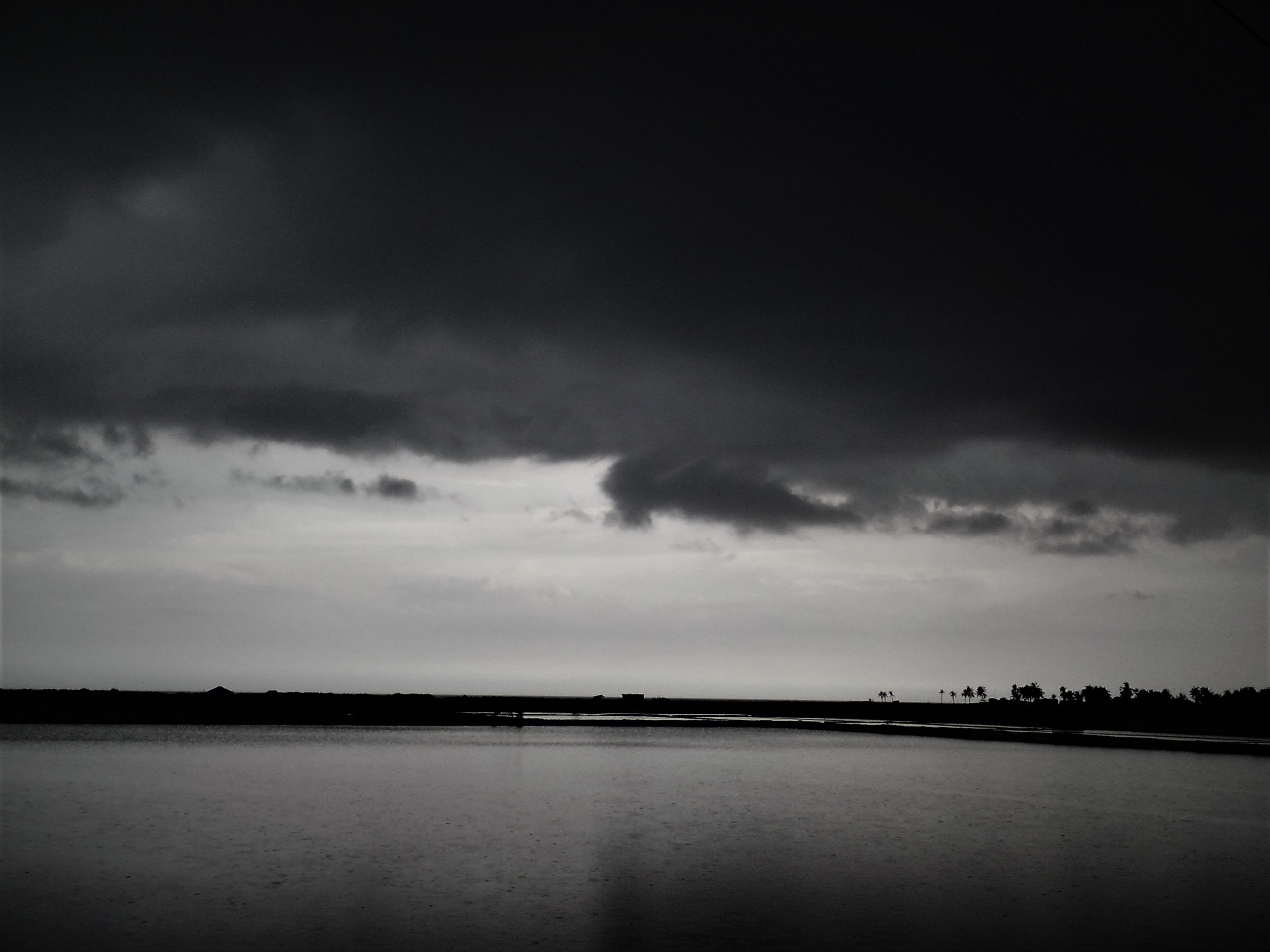 Although my favourite time of year anywhere in Vietnam is the Southern Dry Season, I’m always excited by the rains. No matter how long I live in Vietnam, a monsoon storm will always be the ultimate expression of the tropics, of the exotic, of the power of nature, of the unknowable, and of all the excitement, mystery and potential which that inspires. No matter how much the rains flood my alleyway under two feet of water, making it impossible to return home for hours; no matter how many tennis matches I have to cancel because of wet weather; no matter how many times I have to ride to work in a downpour, arriving in a damp and disheveled state to the amusement of my students; no matter how uncomfortable I feel perspiring in my clothes at a dinner date, I will always be in awe of the rains. There will always be a romance to the monsoon. 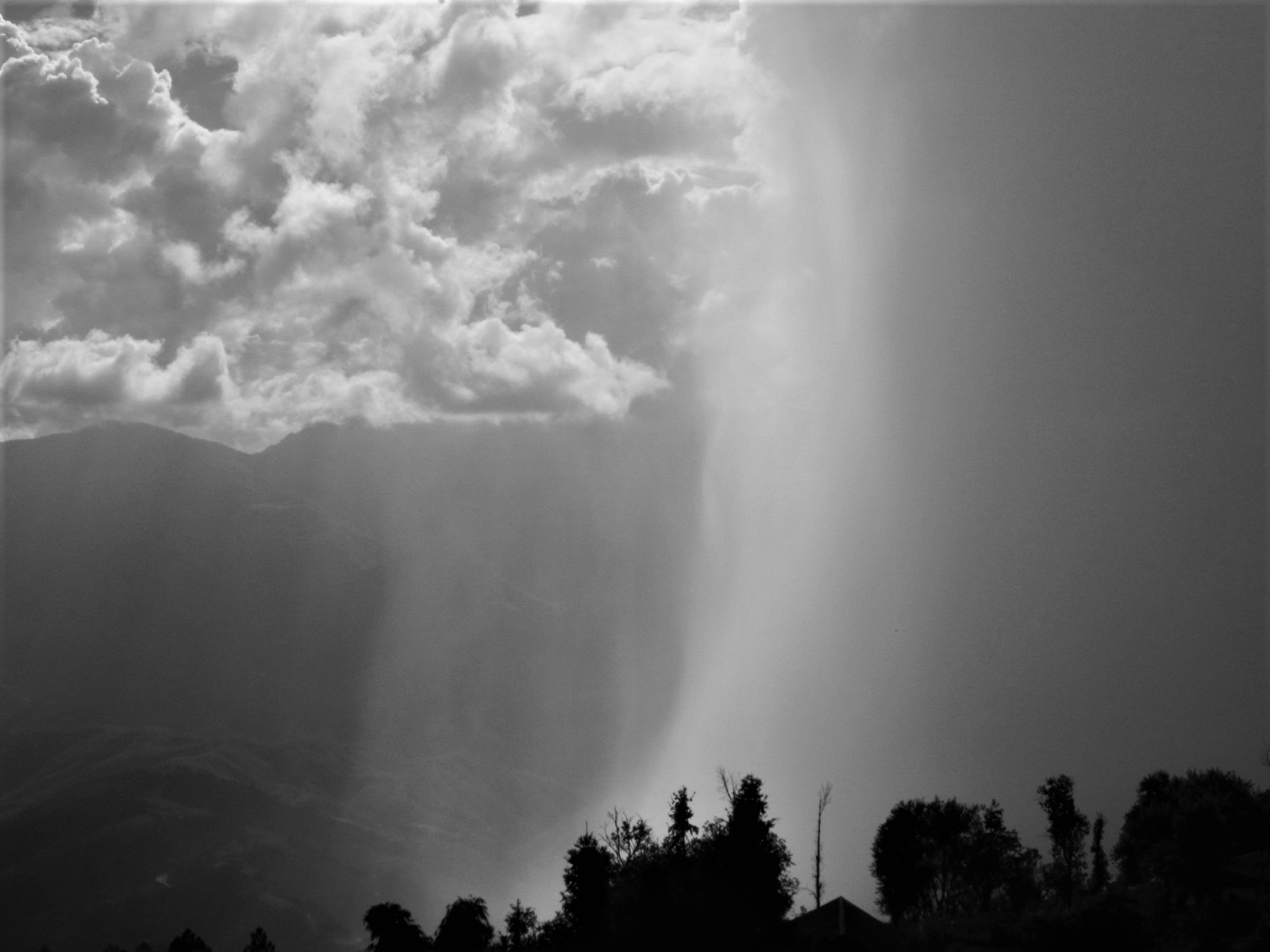 Disclosure: I never receive payment for anything I write: my content is always free & independent. I’ve written this guide because I want to: I like monsoon rains & I want my readers to know about it. For more details, see my Disclosure & Disclaimer statements here

The colours, shapes, sizes, smells & variety of flora in Vietnam is mesmerizing. In this guide I’ve compiled an illustrated index of some of the flowers, plants & trees I regularly see in Vietnam’s countryside & cities….

A period of glorious, warm, sunny weather in the lower regions of Vietnam, the southern dry season lasts from November to May. Here are some of the best places to travel & stay during this time of year.

23 Differences from South to North Vietnam

One of the most interesting aspects of travelling through Vietnam is observing & experiencing the changes that occur from one region to the next. Whether serious or superficial, significant or frivolous, I’ve jotted down some of the differences I notice when travelling south to north…

My Saigon is not the high-rises or attractions of downtown. My Saigon is the local neighbourhood where I live – the alleyways, the market, and the people who inhabit it. In this film I’ve tried to capture the rhythm of daily life over 24 hours on a rainy season day in the area I live in…

Vietnam Weather Guide: When & Where to Go

Weather is an important consideration when planning a trip to Vietnam. Here’s a month-by-month guide to weather conditions across the nation, including recommendations of where to go (and where to avoid) at different times of year…

Dawn is the best time of day in Vietnam. Yet most travellers and expats never experience it. Wake up before sunrise and you’ll witness exquisite skies and the ‘roots’ of Vietnamese daily life. Rising early should be on everyone’s list of things to do in Vietnam….