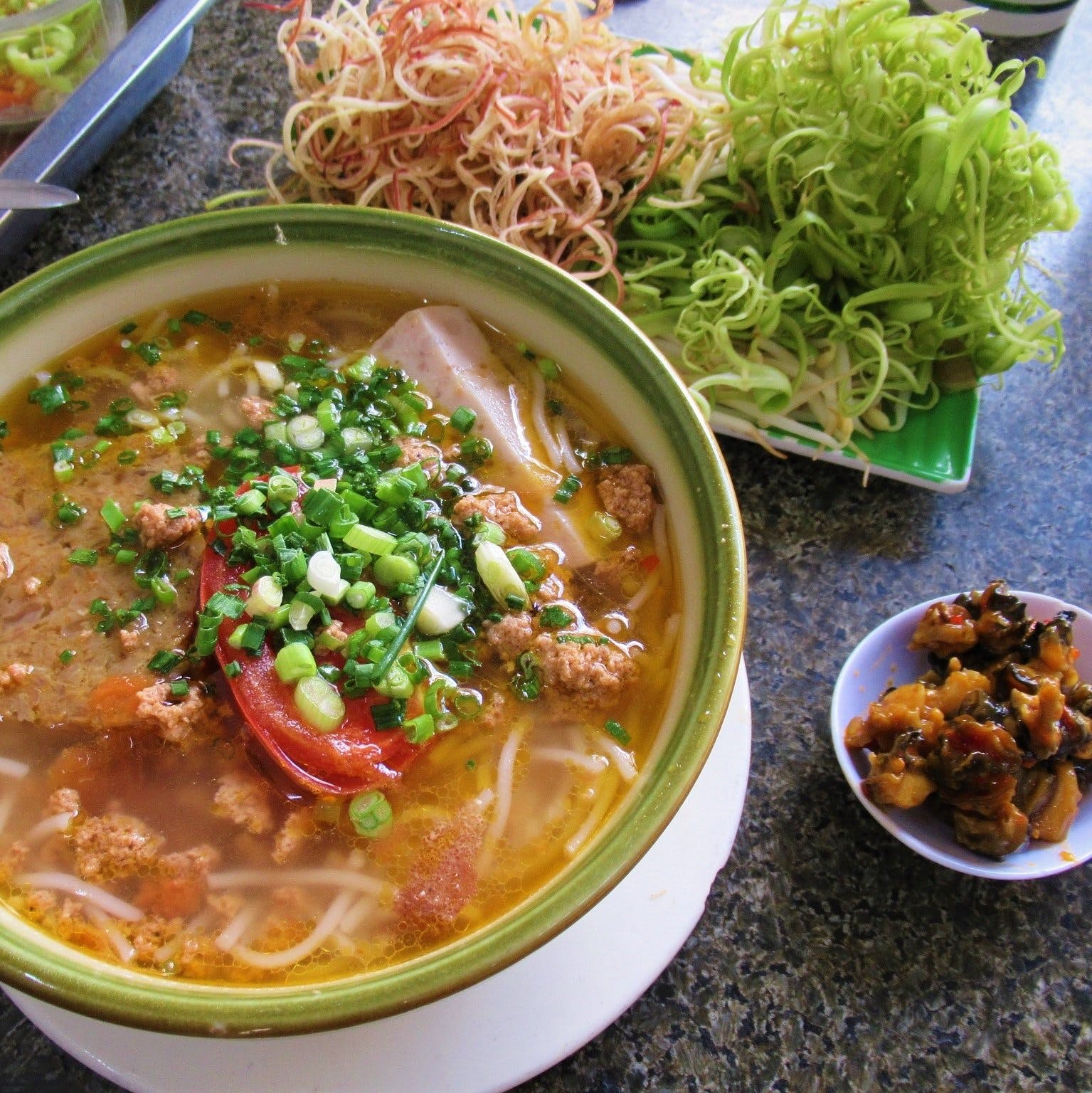 A deep, reddish broth made from tomatoes and pulverized crab, poured over white rice noodles, topped with marinated snails and crab cake, and garnished with fresh herbs and leaves, bún riêu cua ốc is one of those Vietnamese soups that jumps out at you from the bowl. Despite being one of the most ubiquitous street food dishes in Vietnam, bún riêu cua ốc doesn’t s have the same broad appeal among travellers and expatriates as other Vietnamese noodle soups. But, bún riêu cua ốc is a favourite among locals, which, Vietnam being a nation of discerning foodies, is a sign that you should take the dish seriously, however strange it might initially be to your palate. You may find you have to ‘work’ a little before acquiring a taste for bún riêu cua ốc, but this just makes it all the more rewarding when, finally, everything clicks and the dish makes sense. If you’re new to this dish, then Bun Rieu Cua Oc Phan Rang-Ninh Thuan, in downtown Saigon (Ho Chi Minh City), is a good place to start, because it serves a relatively mild – but genuine – version of the soup, that’s a good training ground for your taste buds to learn the pleasures of bún riêu cua ốc. 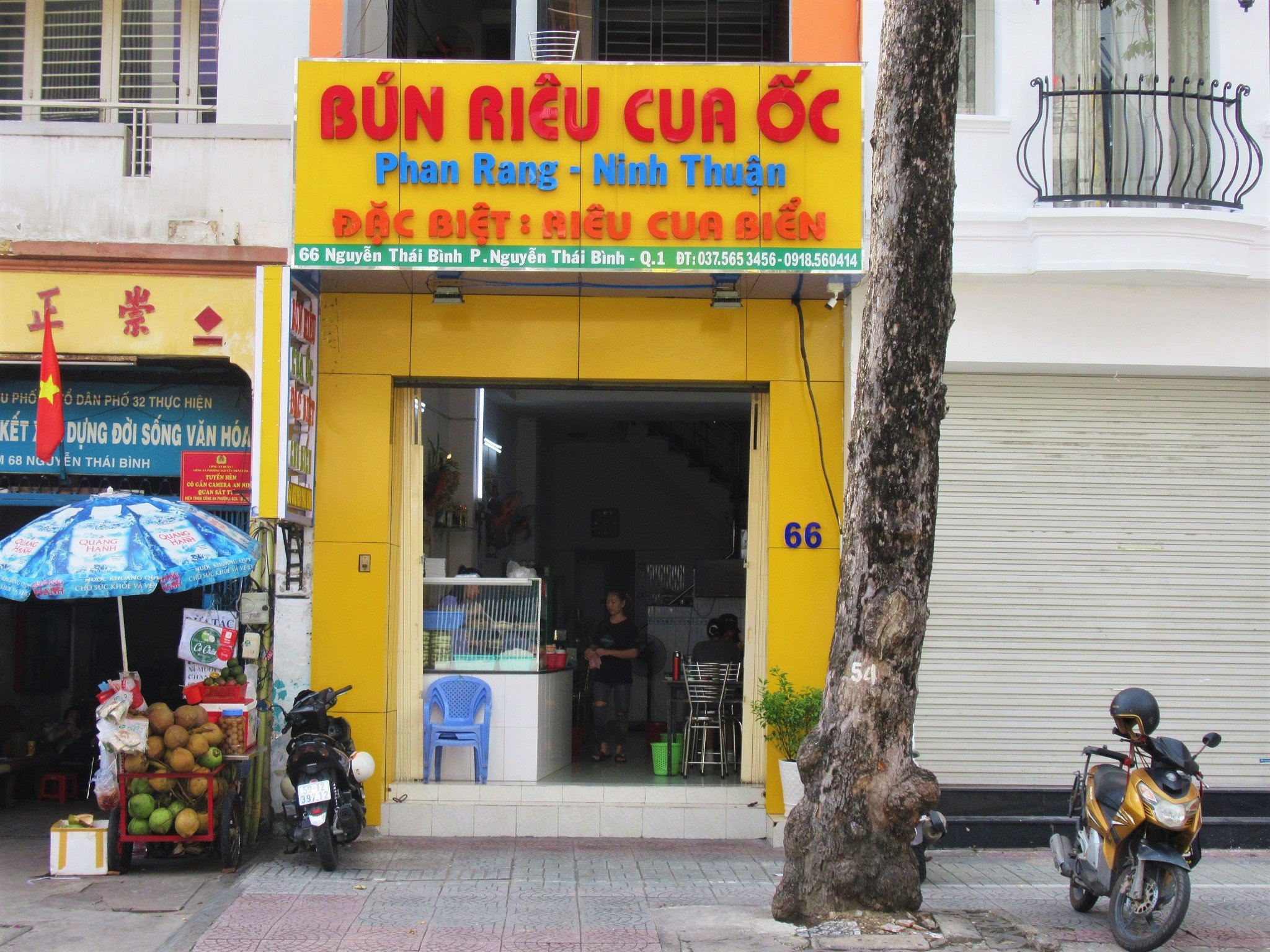 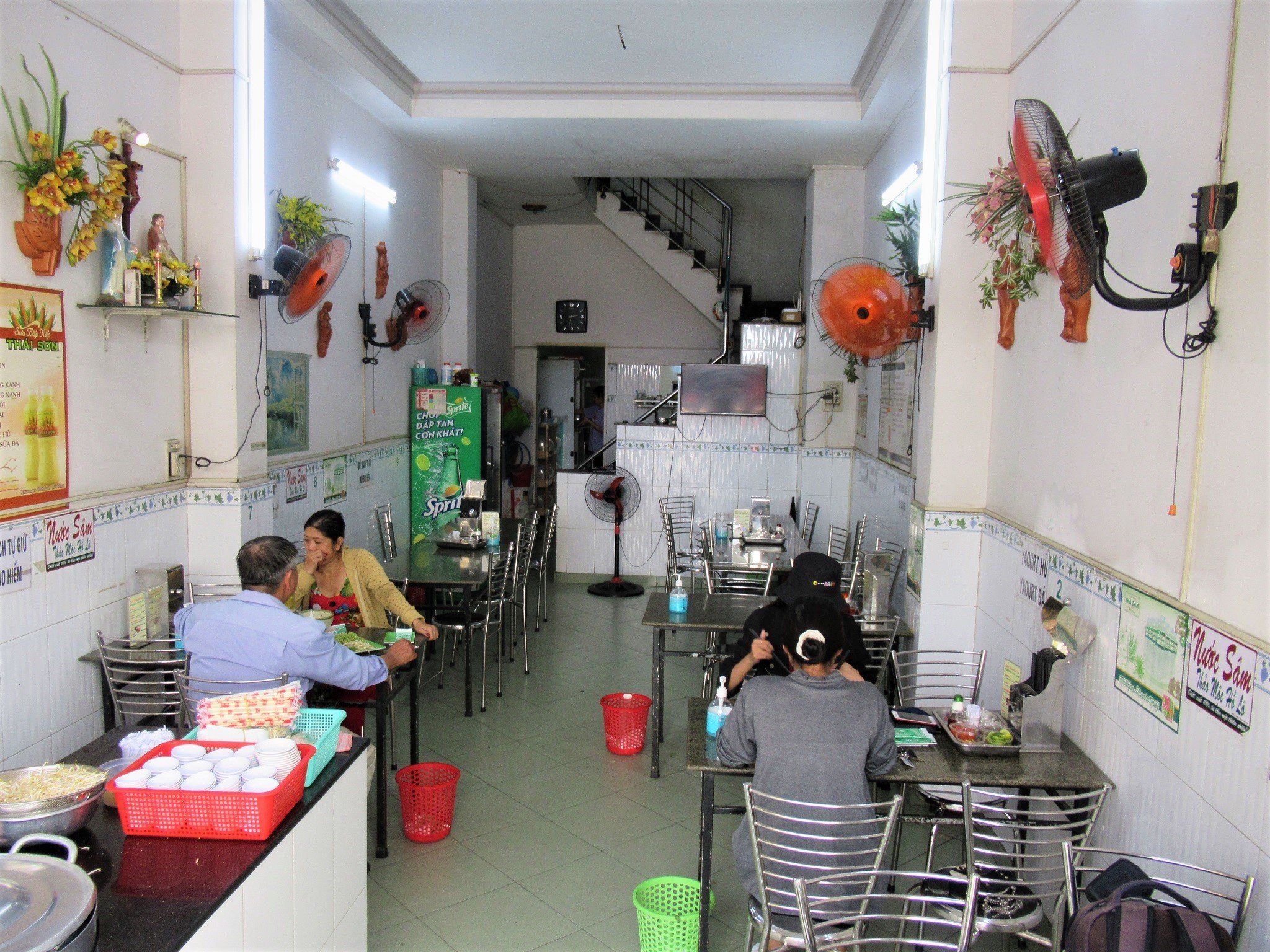 Open from morning till evening, the menu at Bun Rieu Cua Oc Phan Rang-Ninh Thuan is simple: bún riêu cua (noodles and crab broth) with ốc (snails), chả (pork and crab meatloaf), or đầy đủ (everything). Personally, I would recommend going for the snails (ốc), as that’s what makes this dish special, in my opinion. The snails come on the side, on a separate little dish. The snails are already out of their shells, and marinated in chilli and tamarind (although I could be wrong about the latter). They’re pretty little things and nicely presented. When the bowl of bún riêu (noodles and broth) arrives, pop all the snails into the broth and stir them in. The snails themselves only have a mild flavour, but the marinade helps to liven them up. However, the snails are more about texture and nutritional value than anything else. Satisfyingly chewy and full of protein, snails are eaten all over Vietnam in great quantities and with great sophistication. Indeed, there’s a whole eating and drinking culture surrounding the cooking and consumption of snails. 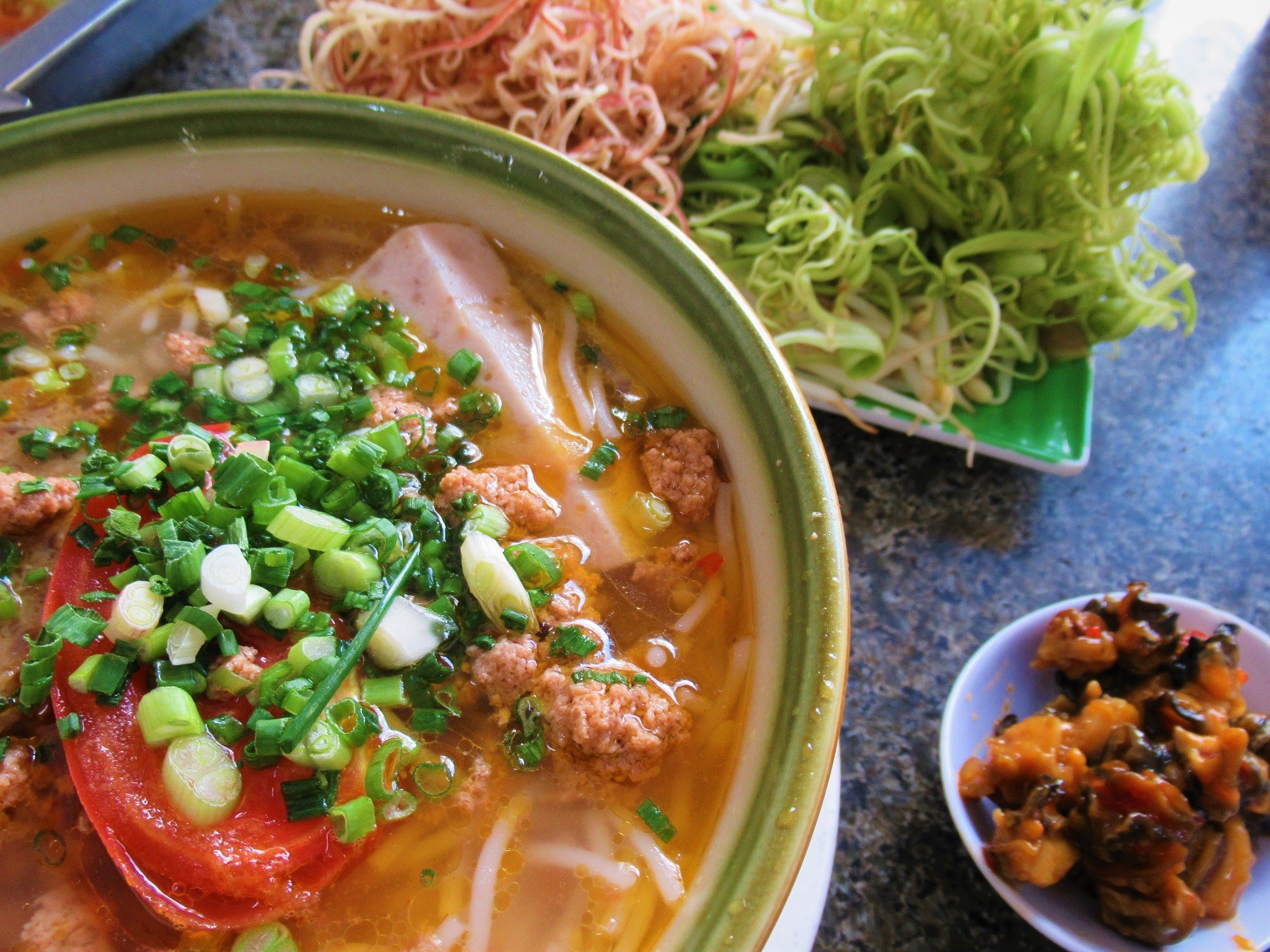 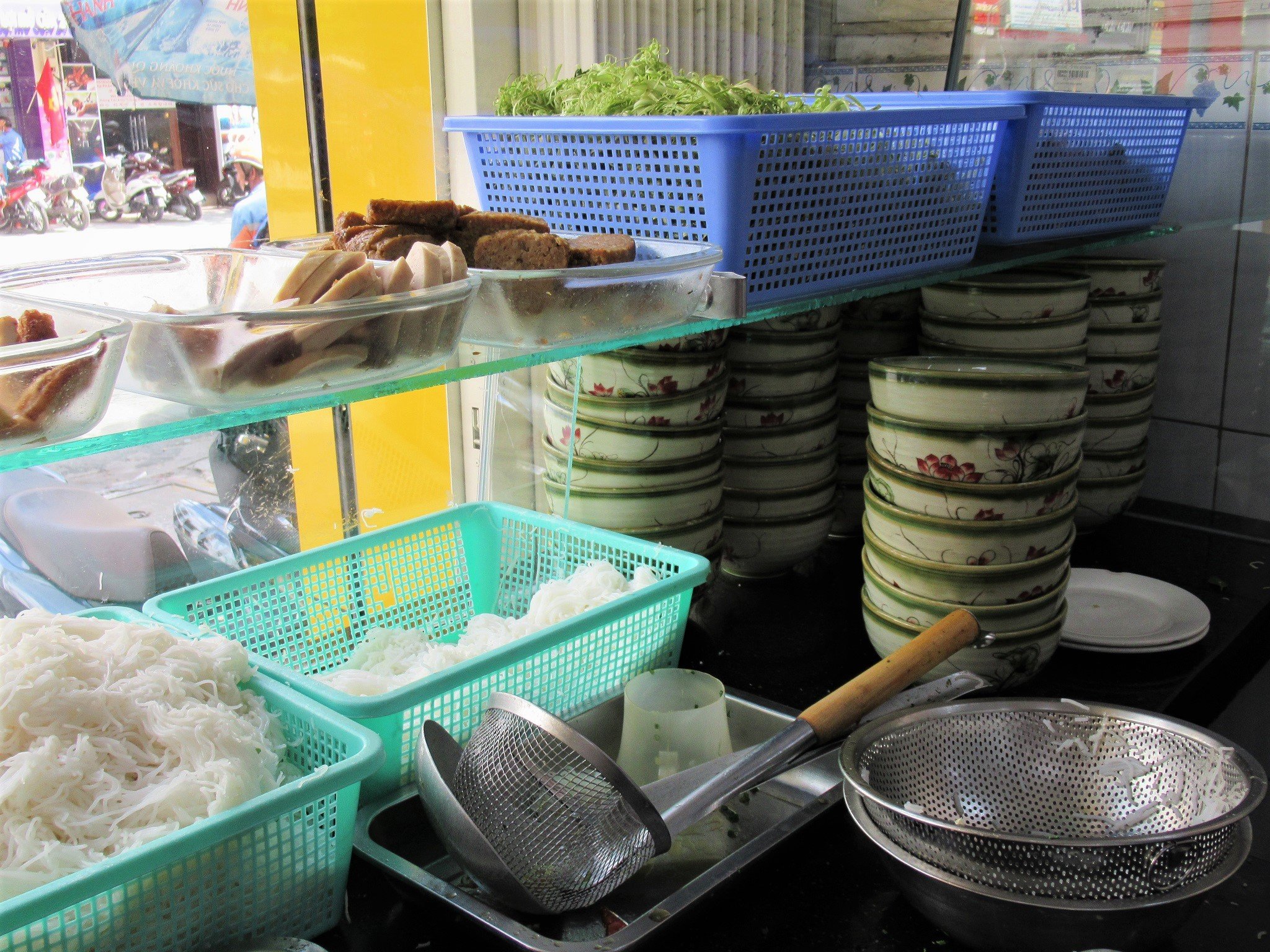 Fundamental to bún riêu cua ốc is the broth: a tomato- and crab-based concoction that looks and smells as rich as it tastes. The crabs are traditionally small, freshwater, rice paddy crabs which are crushed and strained to give flavour and colour to the broth (this is the ‘riêu’ element in the name of the dish). However, in the case of Bun Rieu Cua Oc Phan Rang-Ninh Thuan, the crabs are saltwater ones from the ocean, which is an interesting variation and may give the broth a saltier flavour (but I’m no expert). The stock is colourful, live, and active: more of a potion than a broth. Things are happening in the giant pot as you watch the broth bubble and swirl on the counter at the front of the soup house. With smudged patches of colour, one bleeding into another, a bowl of bún riêu cua ốc resembles a painter’s palette. 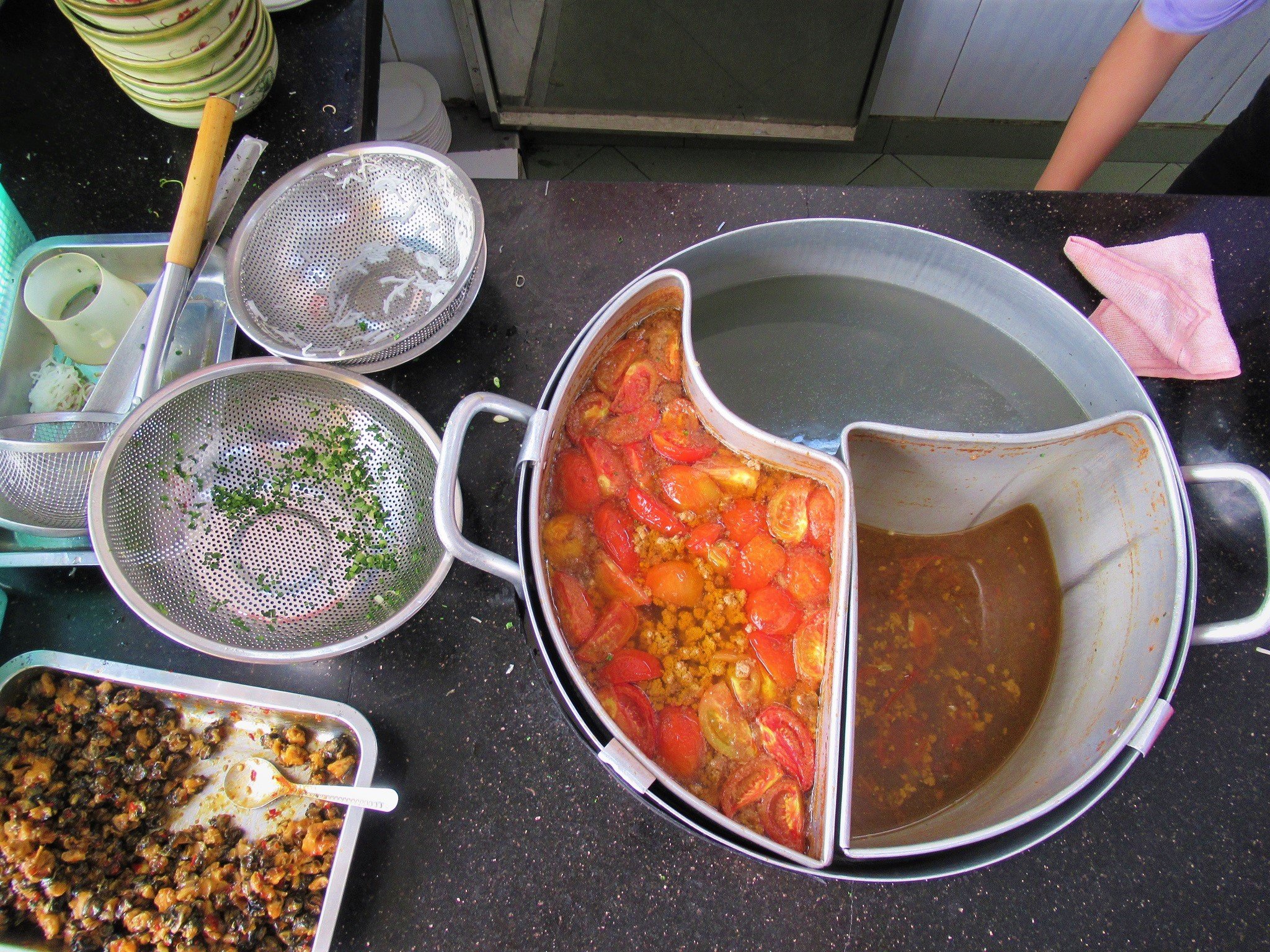 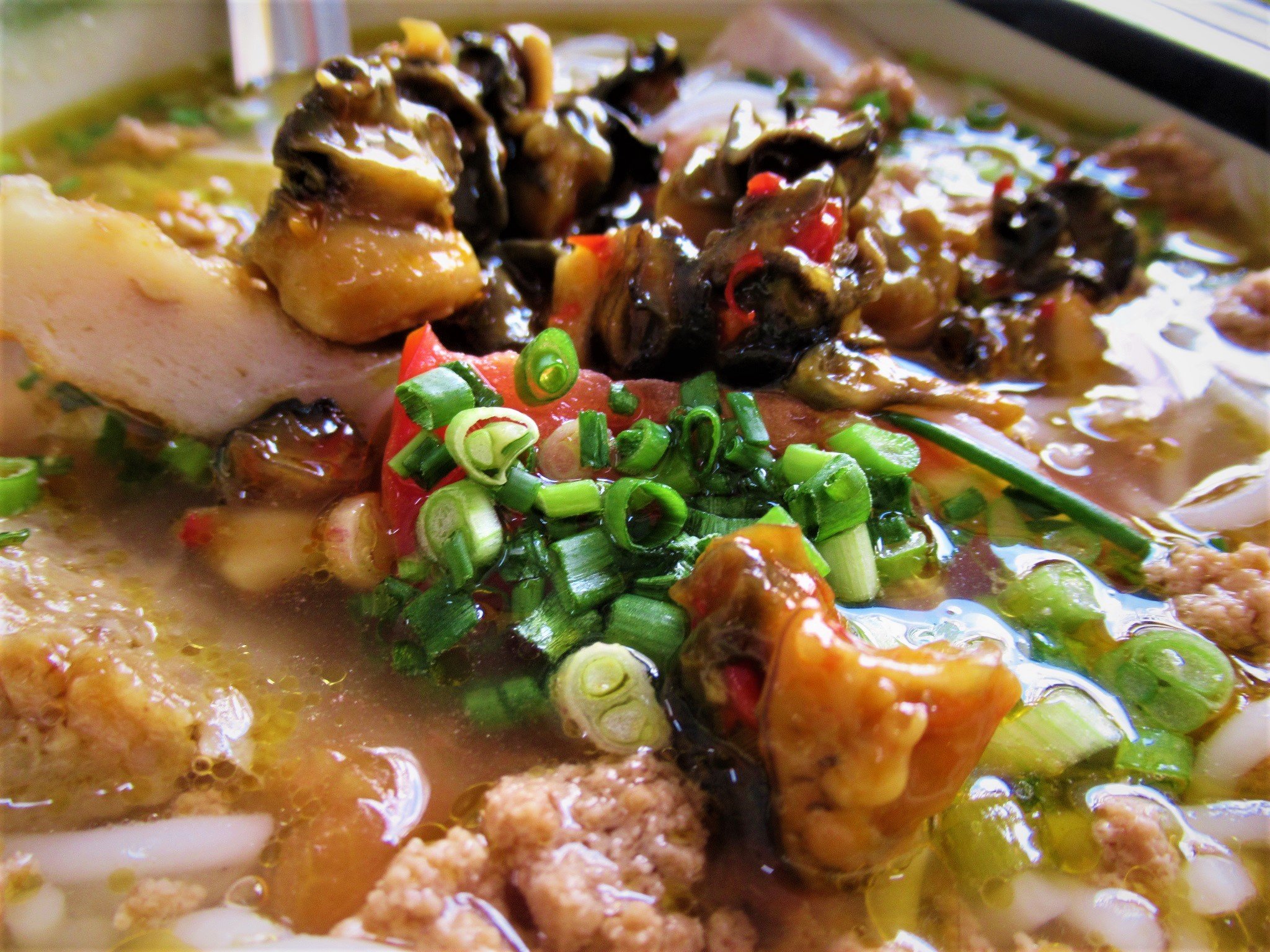 The richness of the crab is balanced by the sweet-sour of the tomatoes, and yet more sourness comes through with the addition of tamarind and rice vinegar to the broth. The earthy-amber colour of the stock – from the crab and tomatoes – is further reddened by annatto seeds, which are often used as a natural food colouring, but also impart a subtle yet distinctive fragrance. The broth is poured into thick, attractive, painted ceramic bowls over rice noodles (bún), on top of which are placed extras, such as an assortment of chả (slices of fish, pork, and crab meatloaf). When the bún riêu cua ốc arrives on the table, it looks superb: but that’s nothing surprising in Vietnam, where food presentation is an art form. 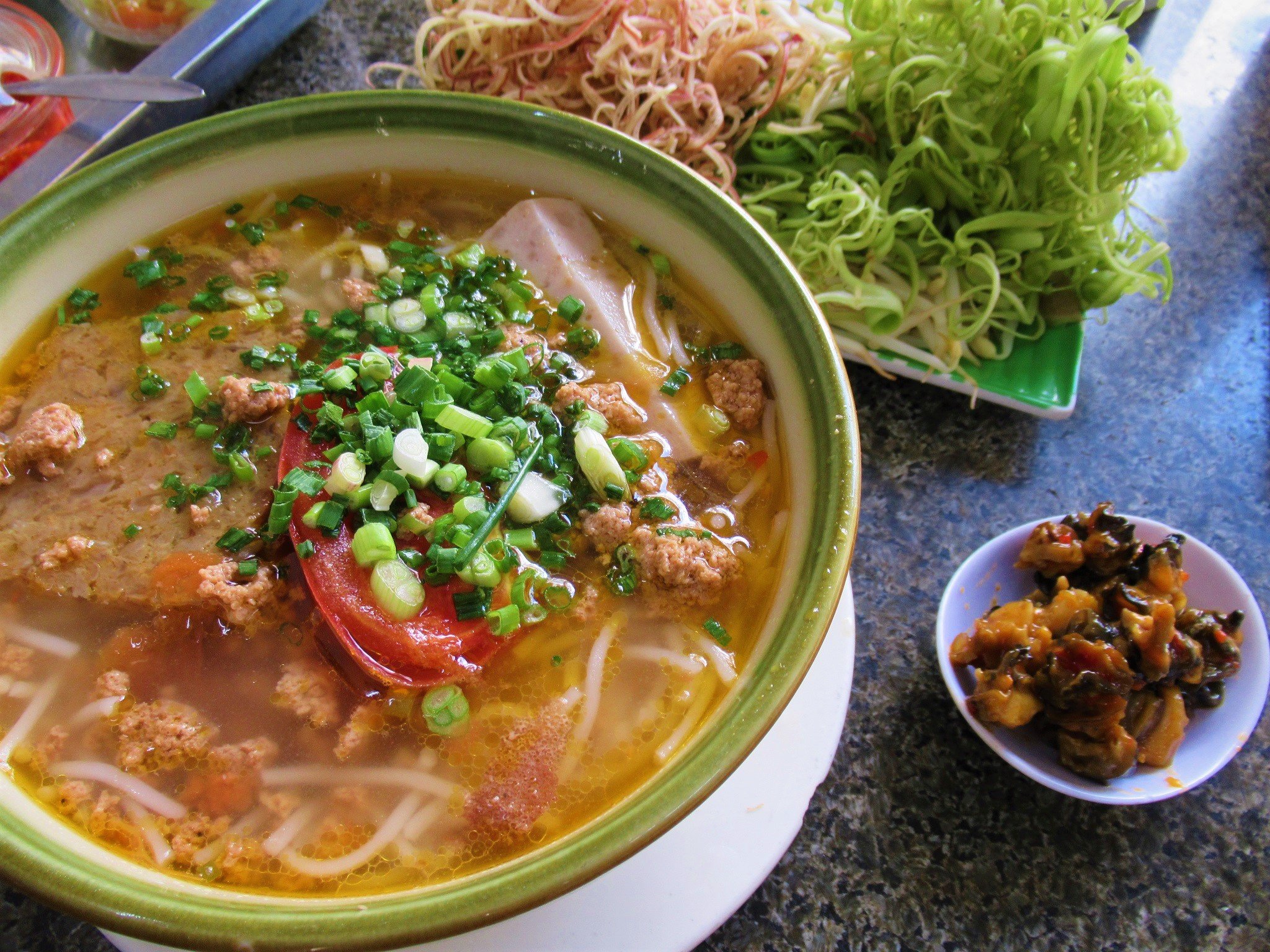 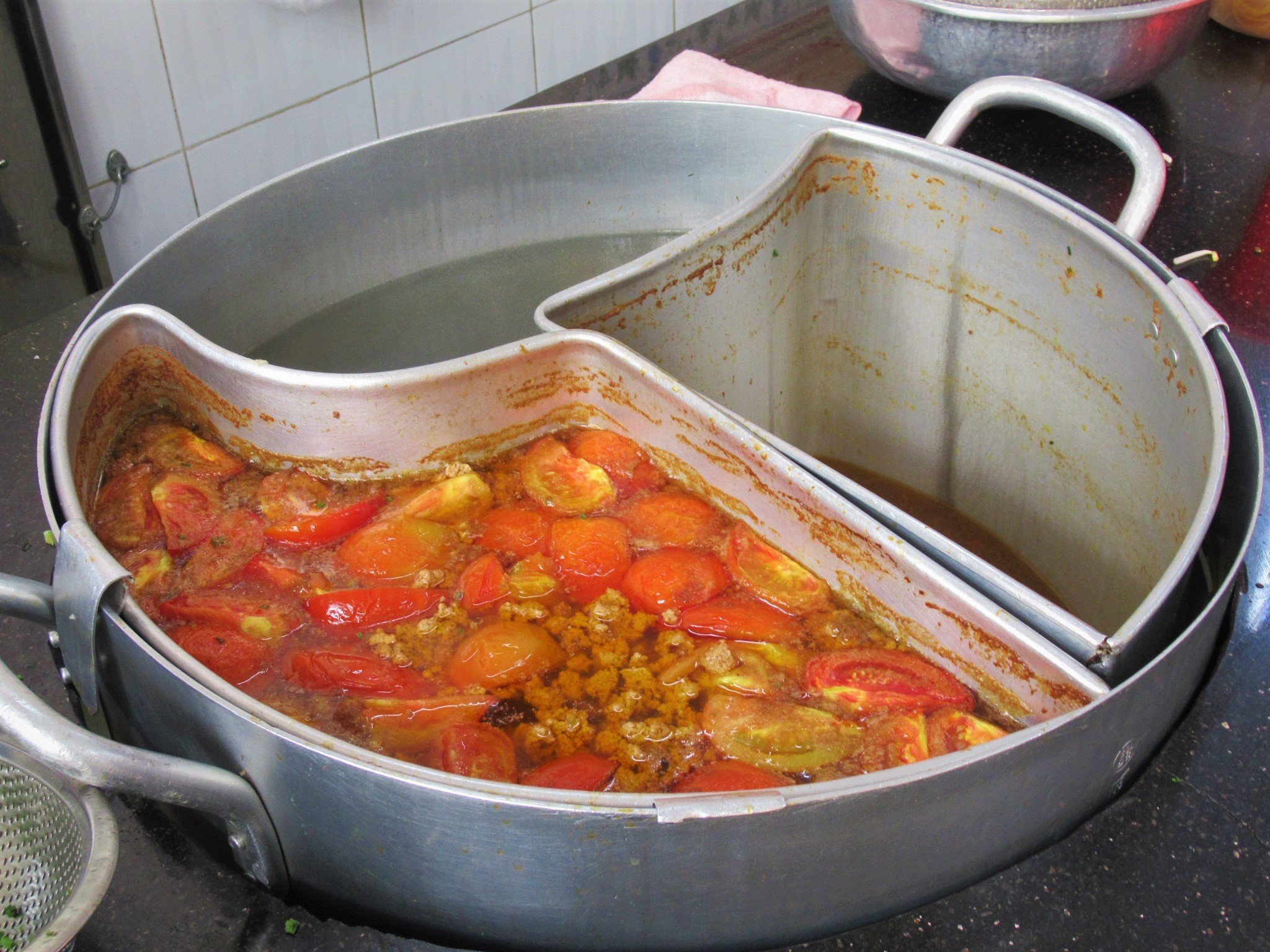 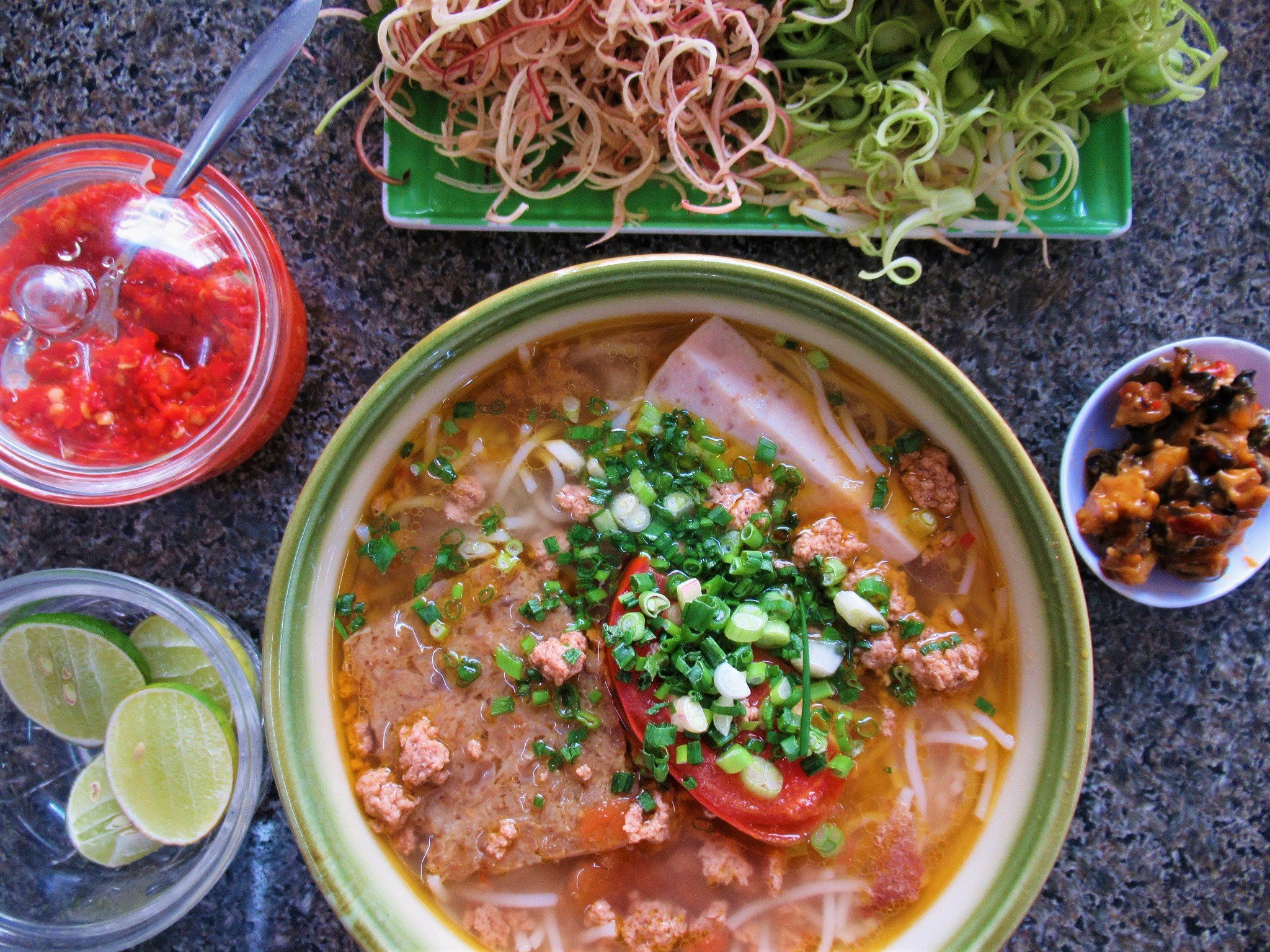 Into the broth, you can choose from a number of accoutrements, including red chilli paste, finely sliced green chillies, salty fish sauce, a squeeze of lime, a dollop of mắm tôm (pungent, fermented shrimp paste), and a sprinkling of sugar to cut the potency of the latter. On top of this, add crisp greenery for extra crunch, flavour, and nutritional value: shredded morning glory, banana blossom, bean sprouts, and watermint. Stir it all in with chopsticks and a spoon, and you’re good to go. It’s a world of textures and flavours; each mouthful a little different from the last: fishy, salty, sour, sweet, hearty, and refreshing. A bowl of bún riêu cua ốc costs between 55,000-65,000vnd ($2-$3). 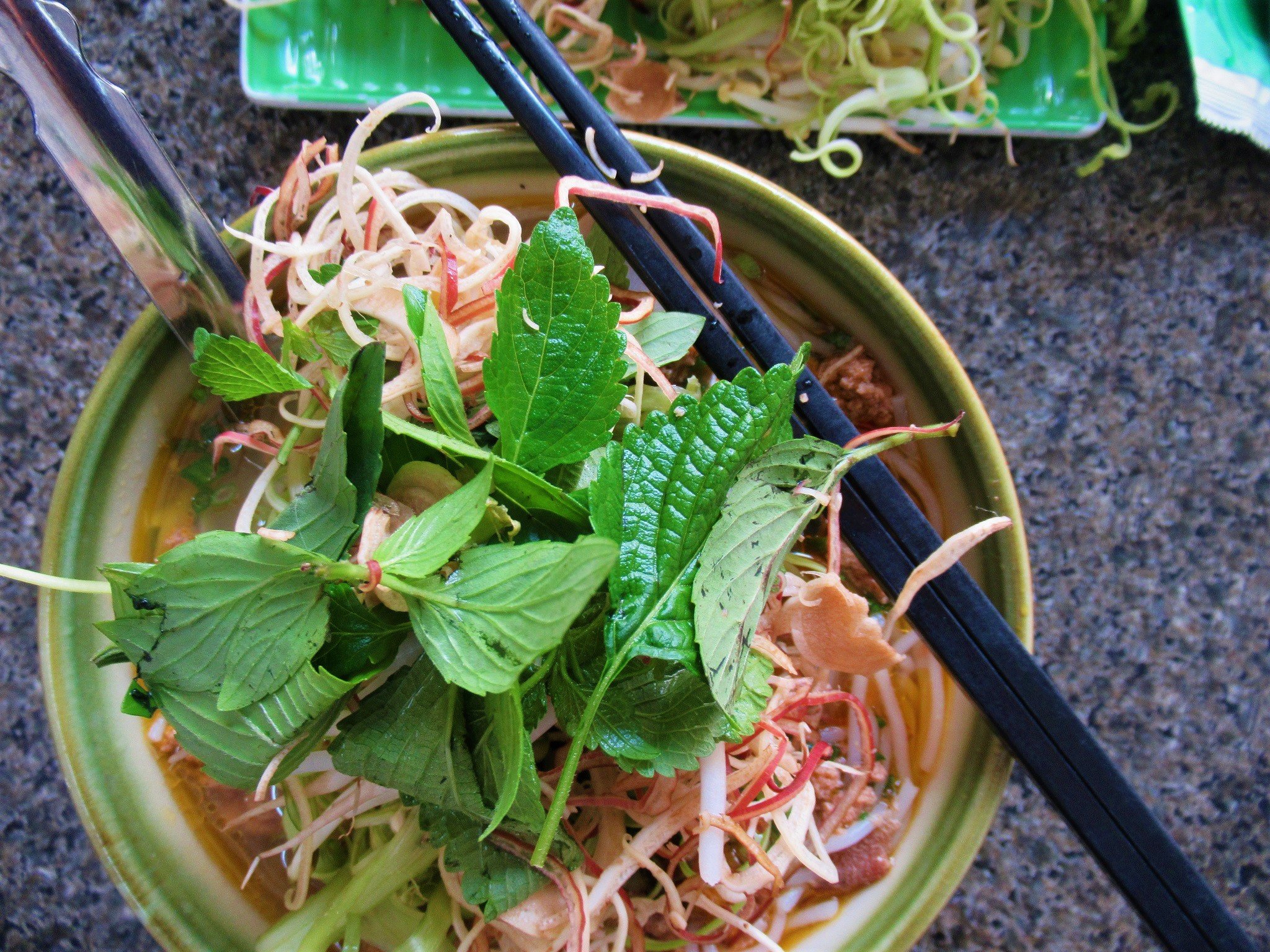 I’m not an authority on the quality of any given bowl of bún riêu cua ốc, but when I bumped into this place in District 1, it rekindled my interest in the dish. This may not be the best example of bún riêu cua ốc in the city, but it is certainly a good introduction to a ‘difficult’ dish for many foreign palates, which is helped by an English menu, a comfortable dining environment, and a central location. A bowl of bún riêu cua ốc here is a deeply satisfying experience; as is almost always the case when sitting down to a noodle soup in a local eatery in Vietnam. Long may that last, even in Saigon’s District 1. 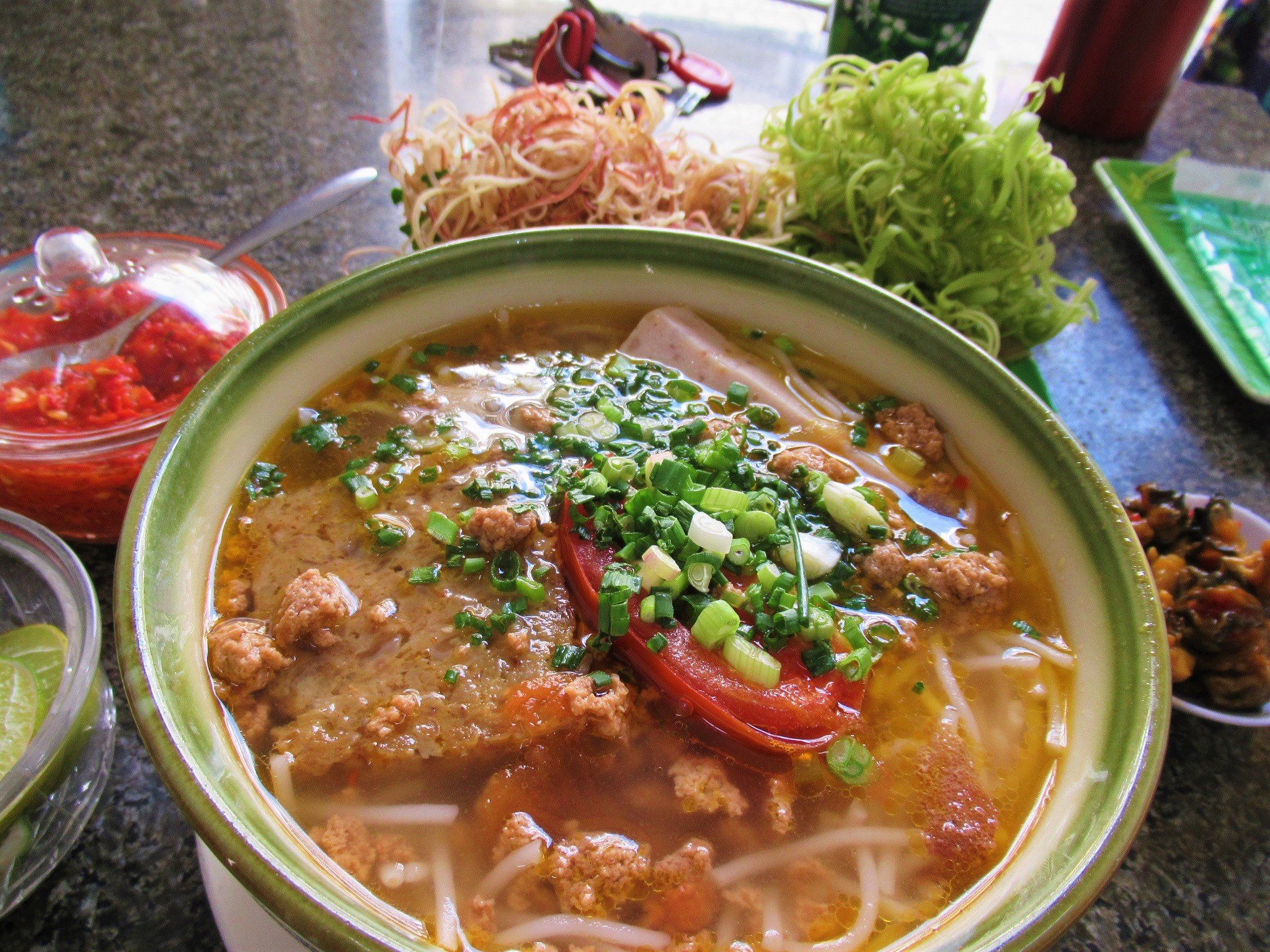 Disclosure: I never receive payment for anything I write my content is always free & independent. I’ve written this guide because I want to: I like this dish & I want my readers to know about it. For more details, see my Disclosure & Disclaimer statements here

Defined by its thick yellow noodles, crunchy rice crackers, quail eggs, fresh mint & salty-sweet sauce, mì quảng is a much-loved dish from Central Vietnam. The version at Mì Quảng 85 in Saigon is full of texture & colour, if a bit too sweet….

Deep in Saigon’s Chinatown, there’s a bowl of goat noodles that’s meaty, rich, silky and smooth. This soup is full of farmyard flavours: it’s a barn in a bowl. Make no mistake, this is a heavy breakfast, but it’ll keep you going till the evening…

The last few years has seen an explosion of good-quality yet reasonably-priced sushi joints in Saigon. Décor is cheerful, ambience is informal, and customers are young & convivial: welcome to Saigon’s budget sushi scene….

At night, a scented fog hangs over a busy intersection in Saigon. The aromatic haze is the ‘Chicken Mist’ resulting from a dozen roadside barbecues hissing, smoking and grilling hundreds of fresh chicken carcasses. This is Chicken Corner, and this is where you come to get your poultry fix of crispy, tasty, delicious, grilled chicken in Saigon…

Snail eating is incredibly popular in Vietnam. A night of shells & beer is a very local experience. Young & old feast late into the night. The snails come in all shapes and sizes and they’re delicious. ‘Shell tapas’ is a fun night out that everyone should try