This post was last updated 6 years ago. Please check the comments section for possible updates, or read more on my Updates & Accuracy page.

Binh Thuan Province is known for its beaches and coastal roads, but inland there’s a rich and varied landscape, criss-crossed by quiet back-roads, that’s waiting to be explored. A network of small, rural roads, mostly in very good condition, takes you on an inland loop, starting and ending in Mui Ne. Leading across arid plains where entire forests are burnt to a crisp; through lush river valleys where freshwater bathing and camping are excellent; up twisting passes to highland towns fueled by the tea and coffee industry; and down into the agricultural midlands where tropical produce bulges on every tree, the Binh Thuan Back-Roads Loop explores a different and far less trodden side of this province. 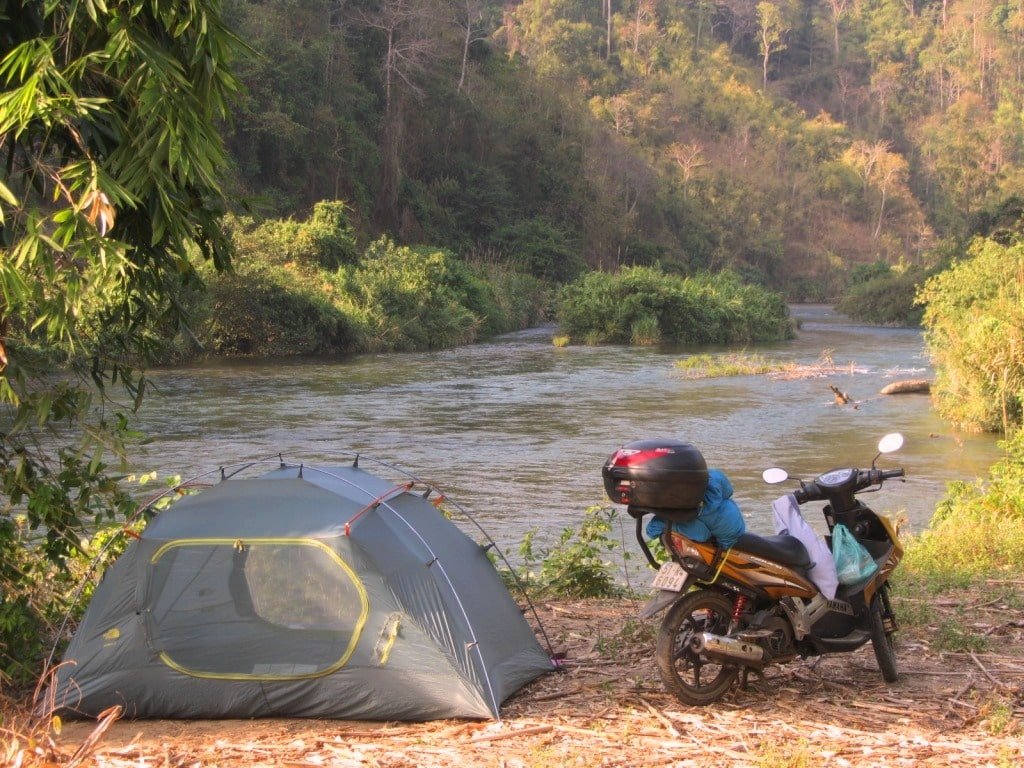 The Binh Thuan Back-Roads Loop is an easy way to get off the beaten path from Mui Ne: road conditions are good, navigation is fairly simple, traffic is light, scenery is gentle and, although you’re never more than a few hours from the familiar comforts of the resort-studded coast, you won’t encounter many other travellers. On the other hand, it’s a particularly outdoorsy loop, with plenty of opportunities to camp, swim, visit waterfalls, and linger in off-the-grid villages. I’ve written this guide going anticlockwise on the loop. 2-4 days gives you enough time to enjoy this ride. I’ve included accommodation (and camping) information and places to eat and drink along the way. This road trip is good anytime of year, but I prefer the dry season months from December to March. Binh Thuan Back-Roads is a good inland extension of my Ocean Road Camping Guide or as a shorter alternative to the Southeast Loop. 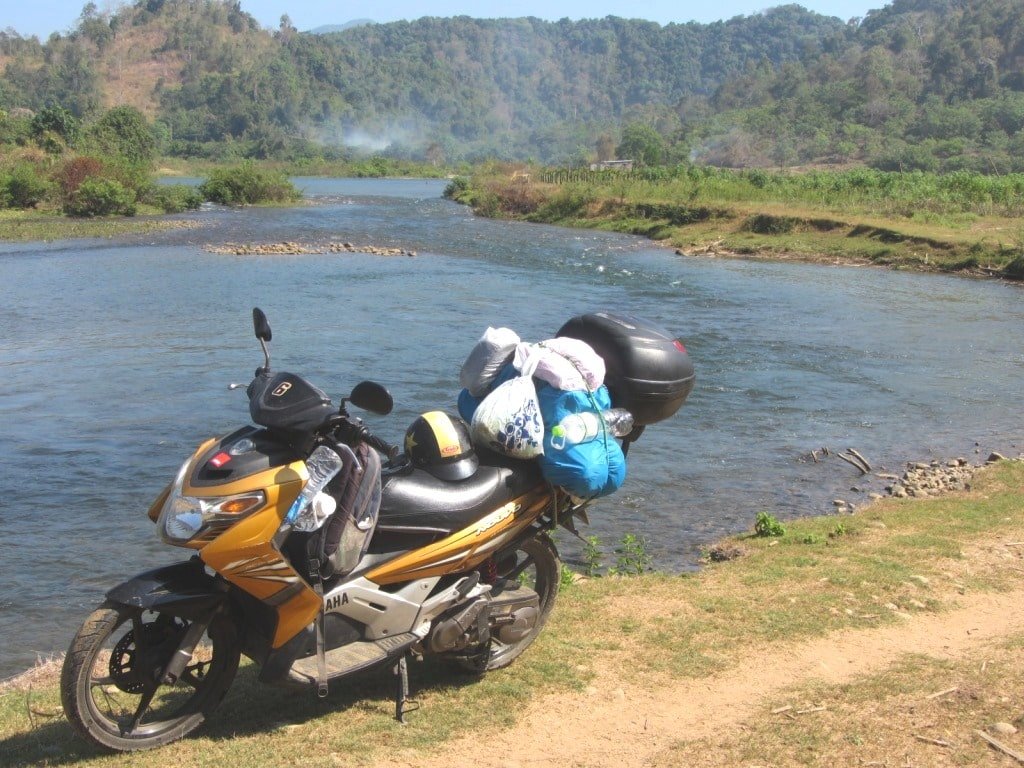 Head west out of Mui Ne along the ocean road, past the dozens of increasingly high-end resorts that now mask any view of the beach. As the development fades and the glittering water of the East Sea comes into view, stay straight ahead towards Phan Thiet. A bustling fishing town that’s full of good street food, I always choose to wind my way through Phan Thiet on a scenic route: taking in the oceanfront road along the municipal beach, then the river road past the enormous fishing fleet at anchor on the Ca Ty River, before heading north out of town on Nguyen Hoi Street. (For accommodation in Mui Ne I like the beach camping at Long Son, the budget rooms at Hiep Hoa, and the tasteful luxury at Victoria Resort & Spa. In Phan Thiet there are great deals at the smart but affordable Ocean Dunes, or you can find dirt-cheap rooms at the collection of nhà nghỉ guesthouses near the beach on Le Loi Street.) 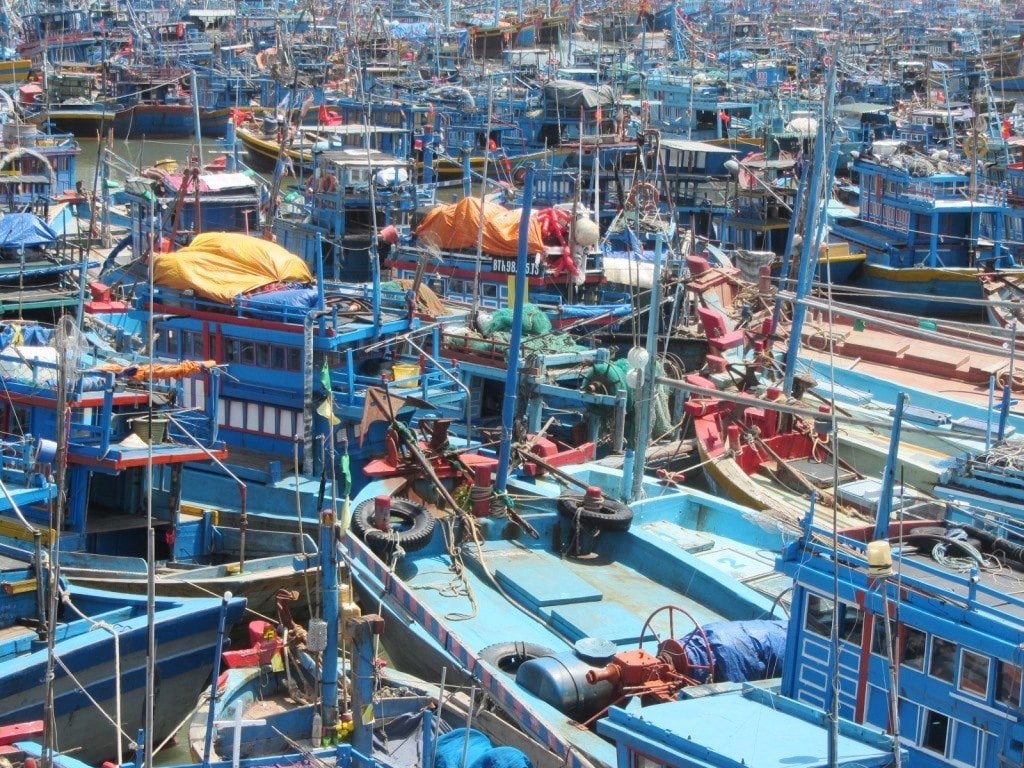 After Nguyen Hoi crosses Highway 1 it becomes National Road 28, connecting Phan Thiet to Di Linh in the Central Highlands. Industry quickly gives way to agriculture on this route: factories churning out building materials to supply Vietnam’s industrial surge are replaced by dragon fruit plantations and rice fields, stretching from the dusty villages lining the road all the way to the blue silhouettes of the mountains on the horizon. At Ma Lâm – a town whose name, as far as I can tell, means ‘ghost forest’ – take a left, heading northwest. The turn is signposted to Đa Mi but the paint is so weathered it’s close to indecipherable.

Almost immediately, all the green disappears, drawn from the fields and trees as if some thirsty giant had stuck a straw into the landscape and sucked it dry of water. The sky is big, the sun is hot and the forests are thirsty, crispy and brittle. The tangled branches are so dry they look as if they’d snap under any pressure, and the trunks are so burnt they are halfway to becoming charcoal. Perhaps this is the ‘ghost forest’ referred to in the name of the previous town. 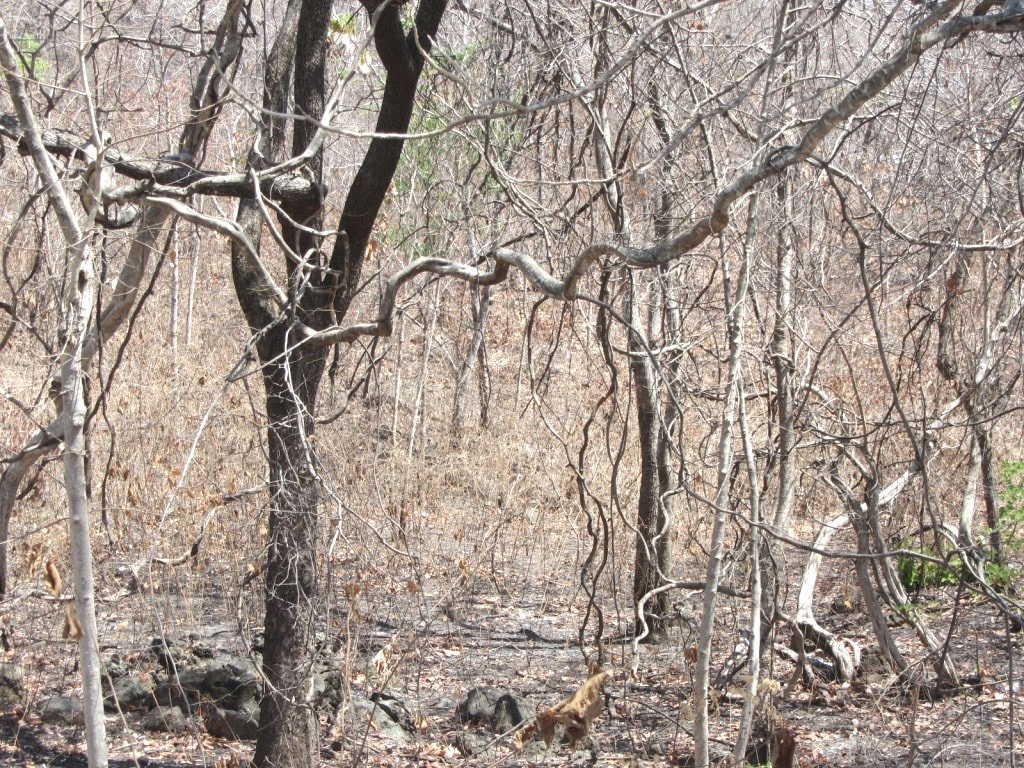 Ghost forest: the trees near Ma Lâm are dry, brittle and burned to a crisp

But then, as streams and rivers begin to trickle off the lower slopes of the Central Highlands, the colour creeps back into the landscape. Mango and cashew trees line the river banks, goats follow lonely shepherds across streams, and mud brick homes – held together with a mixture of straw and concrete with corrugated iron roofs – dot the hillsides. The colours are muted, washed out under the southern sun; the kind of pastel tones you see in Cezanne’s paintings of southern France. Much of this region was once part of Panduranga, the last great centre of the Kingdom of Champa. Although the area is sparsely populated, many Cham people still live here, as do several other minority groups related to the Cham. The pace of life is slow here and people working in the fields are hospitable: this is where I met the octogenarian farmer, Ms Ca. 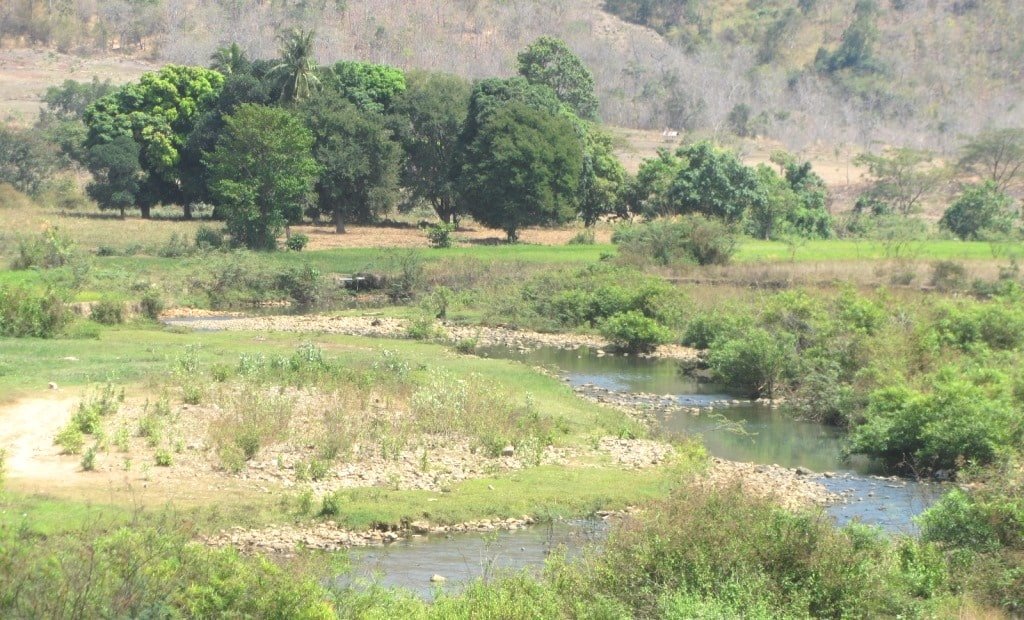 The road deteriorates badly as it climbs a short but steep pass to Ara. From here the scenery changes once again: from arid lowlands to lush, forested midlands. The canopy is green and thick, sporting enormous, old-growth dipterocarps. Although plundered in parts, Binh Thuan Province is still around 50% forested. From Ara the road is freshly paved all the way to the crossroads with Highway 55 at Đa Mi. Here, the hills, forests, bright light, fresh air and scent of coffee blossom, are all signs that you’re now in the Central Highlands.

At the crossroads, bear right (due north) on Highway 55 towards Bao Loc. The road passes by two impressive reservoirs. The first, Đa Mi, forms a lake of cool-blue water cradled by steep mountainsides. The second, Ham Thuan, is so large it looks like an inland sea, with little green islands that, before the valley was flooded in the late 1990’s, were once mountaintops. These two reservoirs dam the Đa Mi and La Ngà rivers respectively, both of which you will encounter in very different circumstances further downstream, later on this loop. 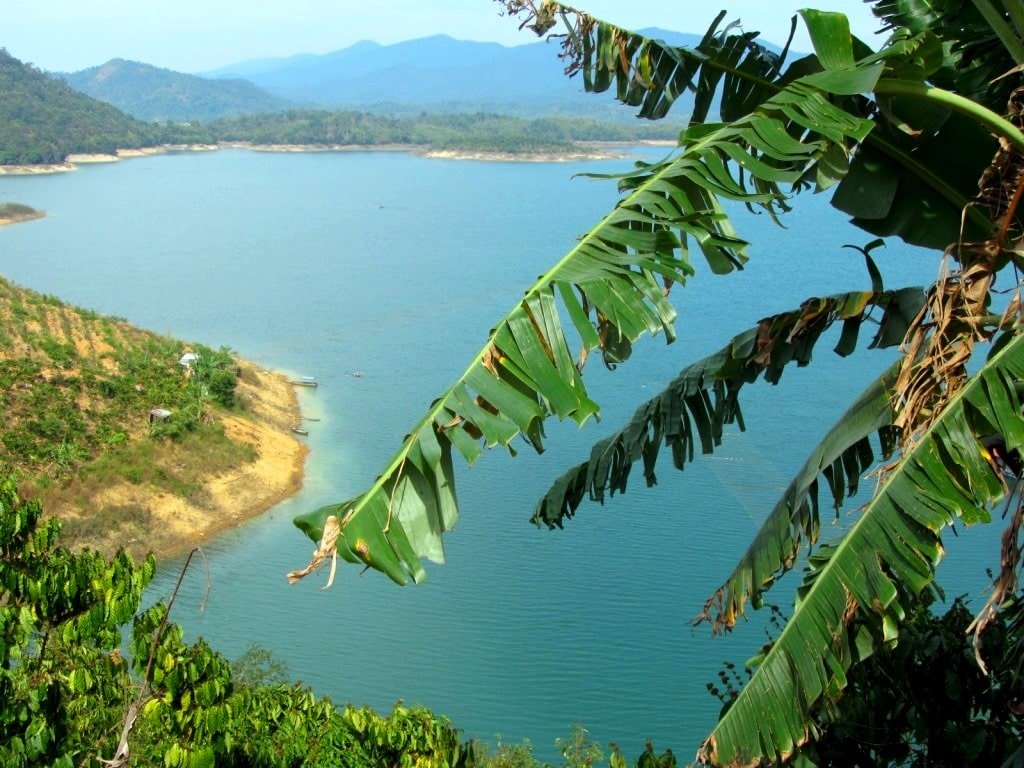 View over the Ham Thuan Reservoir, 40km south of Bao Loc in the Central Highlands

Coffee and tea plantations blanket the hillsides as the Central Highlands town of Bao Loc comes into view. Especially famous for tea production, Bao Loc is one of several highland cities that has been booming for two decades, ever since Vietnam entered the global coffee market in earnest. The result is a city with a tangible, youthful buzz, undergoing many changes. Bao Loc isn’t a beautiful place and the surrounding countryside is cultivated to the extent that trees are a rare sight. However, like so many Vietnamese towns, the energy and life of Bao Loc always ends up winning me over. The scent of tea hangs over town for much of the day, wafting over from nearby plantations. In the evenings, temperatures are pleasantly cool and there are some excellent places for a warming bowl of soup: it’s a good place to spend a night. 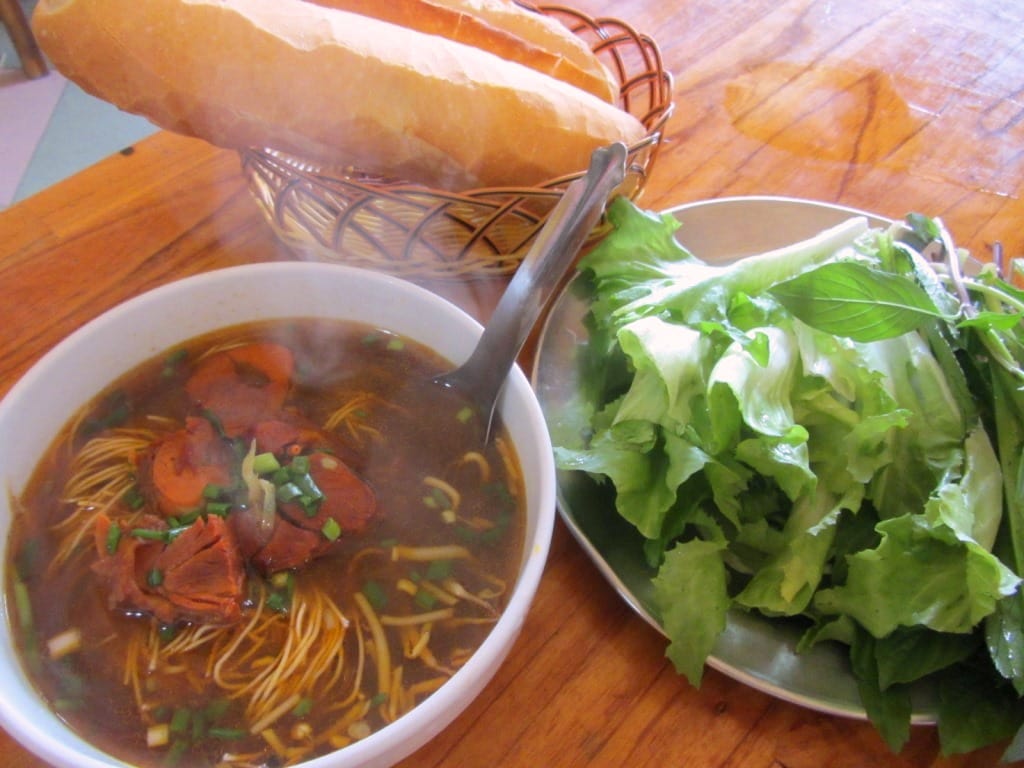 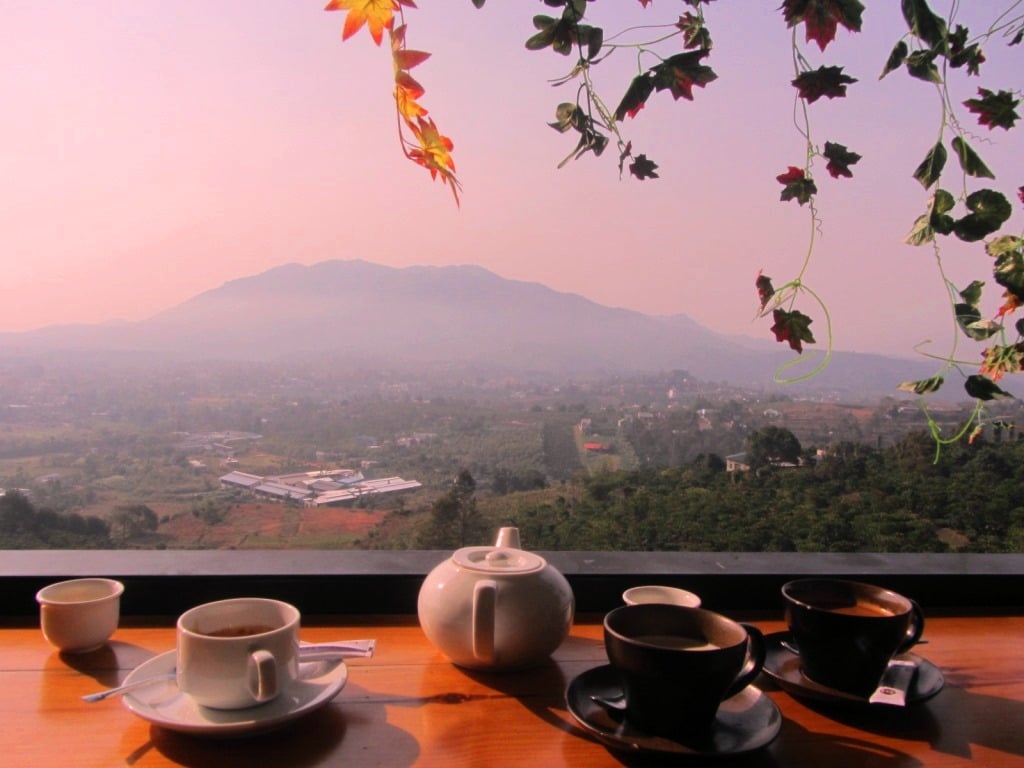 An easy excursion from Bao Loc is Dambri Waterfall 20km to the north, otherwise leave Bao Loc on Highway 20 heading due southwest. This is the main Saigon-Dalat road, most of which is rather horrible and best avoided. However, the 25km section from Bao Loc to Da M’ri is an exception to the rule, as it includes the spectacular Bao Loc Pass, which weaves down jungled mountainsides in a series of looping switchbacks. The village of Da M’ri, surrounded by tropical fruit orchards, is at the bottom of the pass. Turn left here (due south) onto a seldom-used back-road into the mountains. Although the road surface can be bad at times, this route passes through several minority villages and along pretty waterways before descending via the Ba Sa Pass to the warm midlands, much of which is covered in cashew and eucalyptus forests. 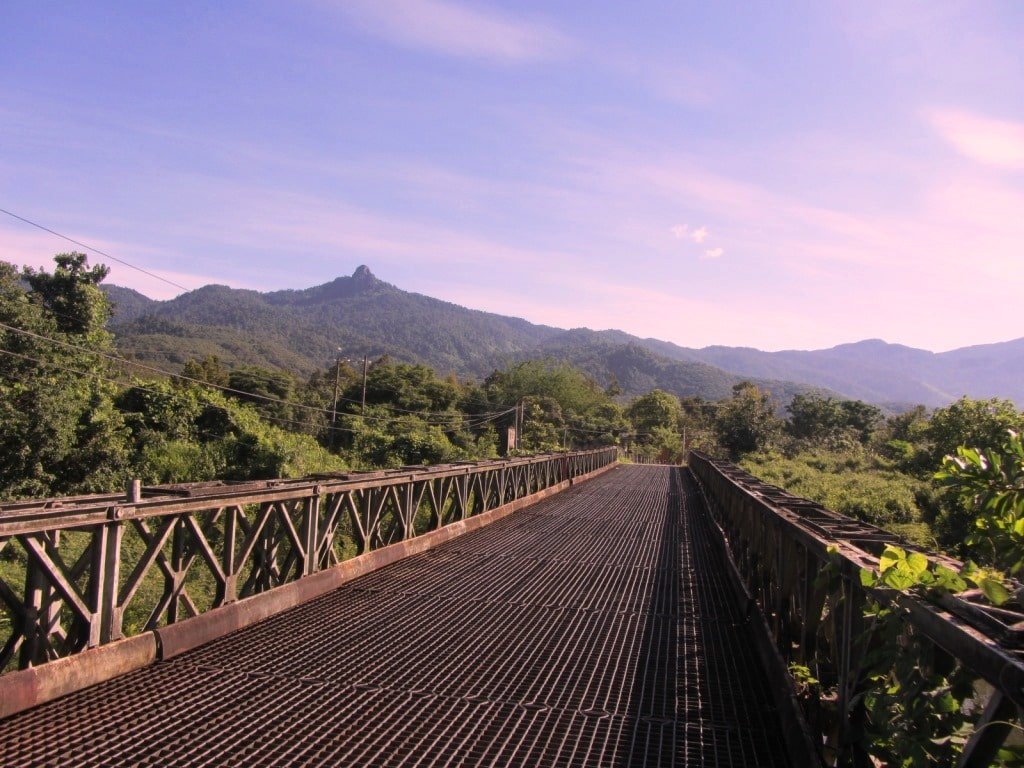 The back-road south from Da M’ri is rarely travelled: it’s rough in places but very scenic

At the first crossroads bear left (due southeast) on Provincial Route 717. This rural byway cuts through shimmering rice fields and attractive, sleepy villages with tiled roofs baking in the sun. Just south of Bac Ruong village the road crosses the La Ngà River. Bear left before the bridge, thus rejoining Highway 55 as it weaves its way along to the course of La Ngà River. This valley is particularly fertile: the banks of the river are bursting with fruits and foliage – banana, papaya, coconut, dragon fruit, jack fruit, cashew, tamarind, lemongrass, bamboo, winter melon, cassava and star fruit all grow in number here. 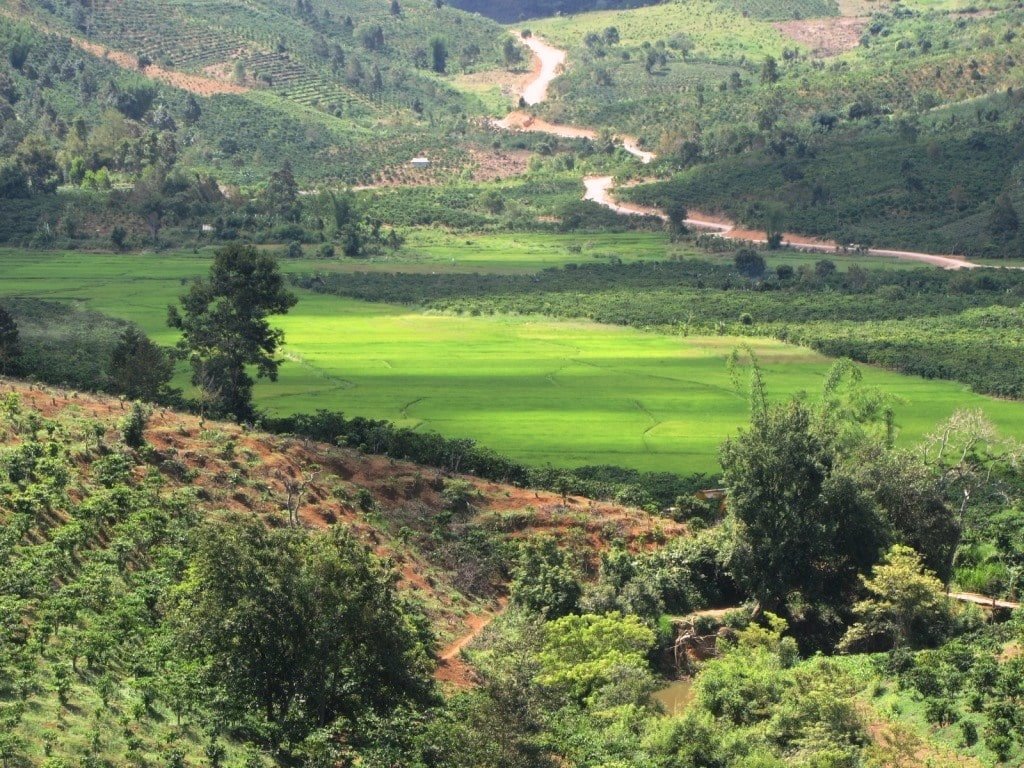 After 10 kilometres, Highway 55 reaches La Ngâu hamlet, at the confluence of three rivers: the La Ngà, Đa Mi, and Đa Ti. These are the rivers that are ultimately dammed 25km upstream at the reservoirs you passed earlier in the loop. A bridge crosses the Đa Mi, where local minority children jump from the top (over 20 feet high) into the water. Although I don’t recommend imitating this feat, there are several beautiful bathing spots on either bank on the west side of the bridge. The swimming is excellent. 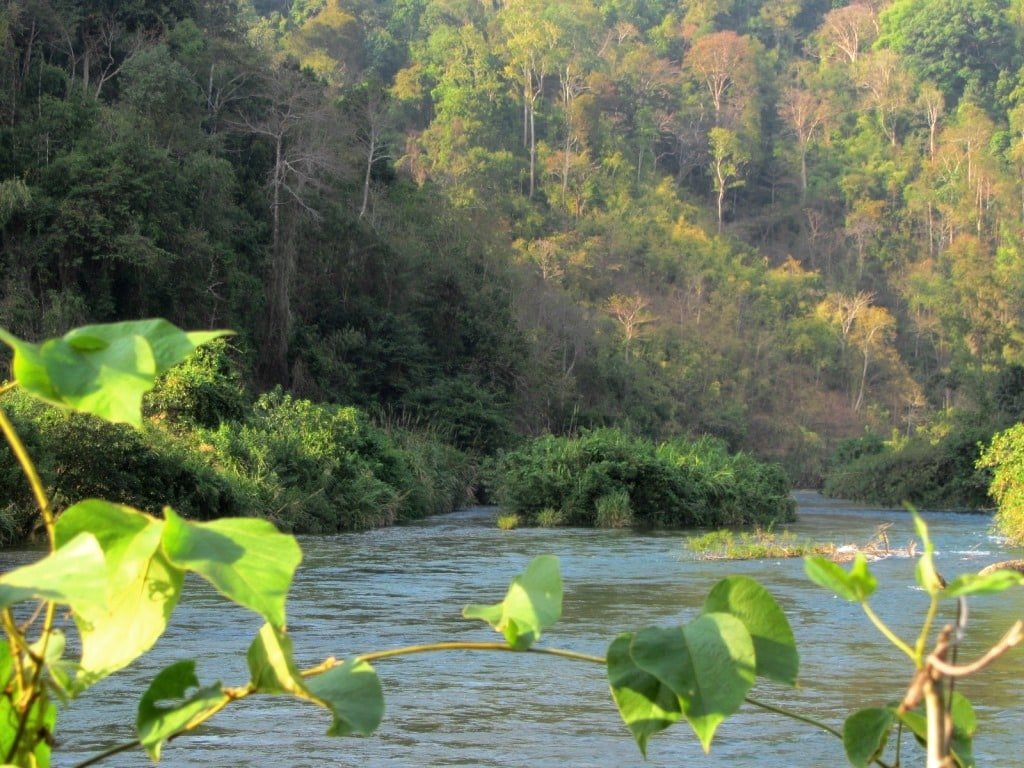 Personally, I was so taken by this river junction that I set off down the dirt paths, which lead a couple of kilometres along both banks, and spent two nights camping by the river. The pathways are bumpy so take it slowly, but the camping is good and I can’t think of a prettier river spot in southern Vietnam. However, choose your camping spot carefully, because the river is regulated by the dams upstream: the water level changes twice daily – even in the dry season when there has been no rainfall – by as much as one metre. Make sure you pitch your tent on the higher bank; not on the beach. 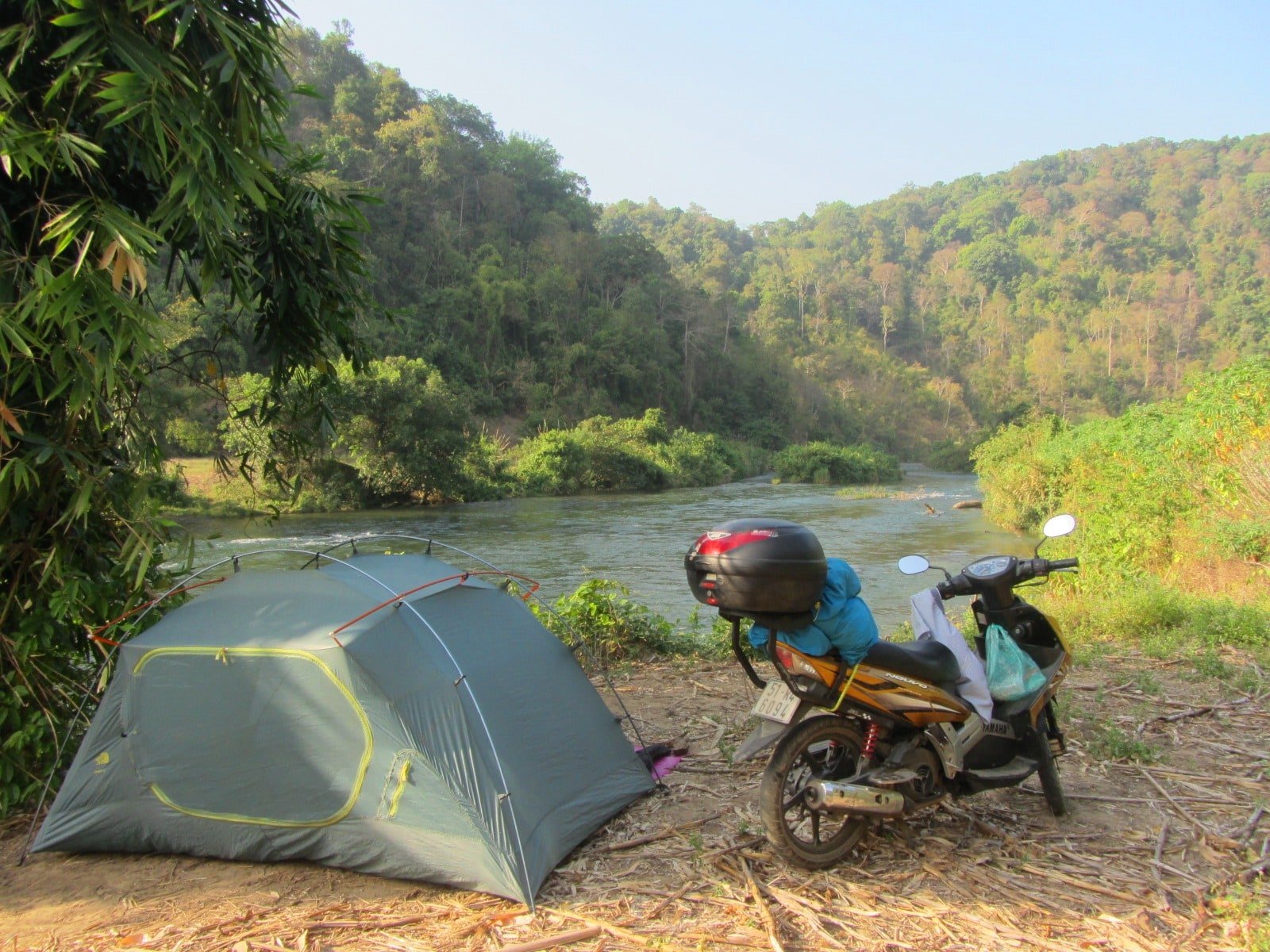 After either a night in the open or a swim in the river near La Ngâu, head back down to the crossroads just south of Bac Ruong, and pick up Highway 55 once again, this time heading south to Lac Tanh (also known as Tanh Linh). This is a nice little town with food, shops, cafes and a couple of nhà nghỉ guesthouses. Nearby, Thac Ba Waterfall has recently become popular with young Vietnamese independent travellers. It’s a nice spot, but sadly succumbing to the inevitable trash left behind by picnickers.

A brand new road (National Highway 55B) races south from Lac Tanh all the way to Highway 1. This new ribbon of smooth, black asphalt cuts through a rich agricultural landscape and then passes through dried-out forests that are slowly being burned away to make room for eucalyptus plantations. When you reach horrible Highway 1 head straight across it and continue south until you hit the coast at Lagi. 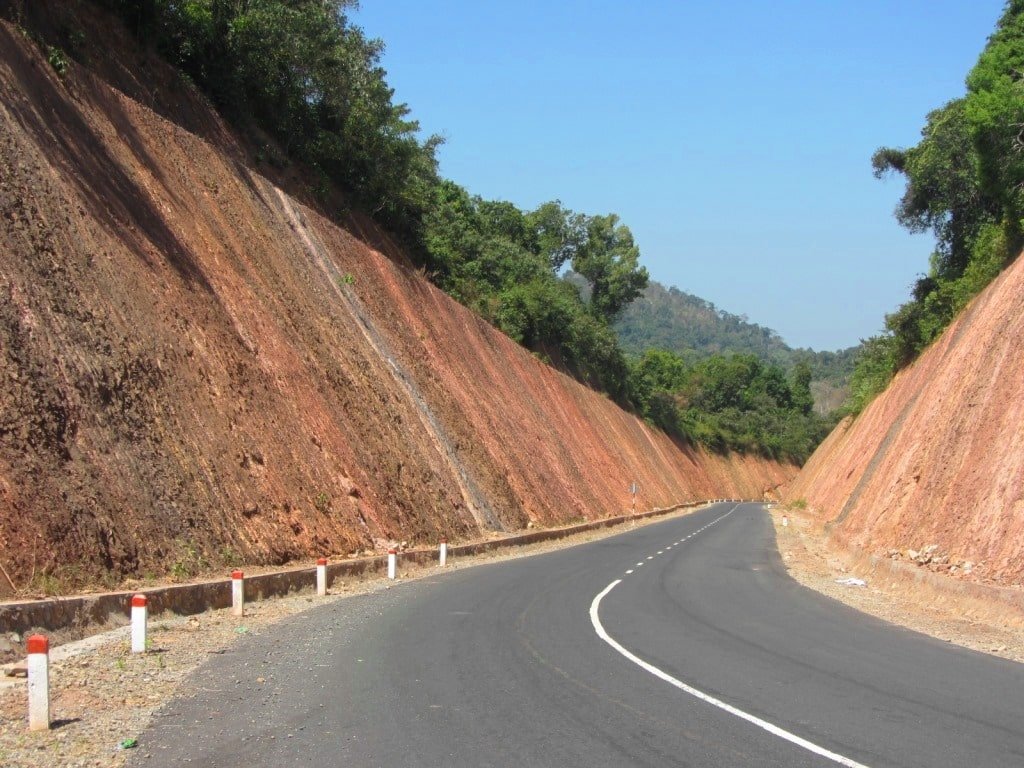 A night in Lagi is always nice (try Ba That Resort, right on the beach, or camping at the ever popular Coco Beachcamp), or bear left (due east) on yet another new road for a night of camping under the coconut palms at Dat Lanh Resort. From here it’s simply a matter of following the excellent coast road all the way back to Phan Thiet and Mui Ne. There are several sights between Lagi and Phan Thiet if you have time: trek or take a cable car up Ta Cu Mountain for fine views and a visit to the monastery and giant reclining Buddha; wade out or hire a local fishing coracle to the lighthouse at Ke Ga; go fishing and camping at Vinh Loc Resort, or treat yourself to a night of comfort at one of the many resorts along this stretch of coast (try Eco Spa Village for great-value thatched roof bungalows on the hillside with sea views). 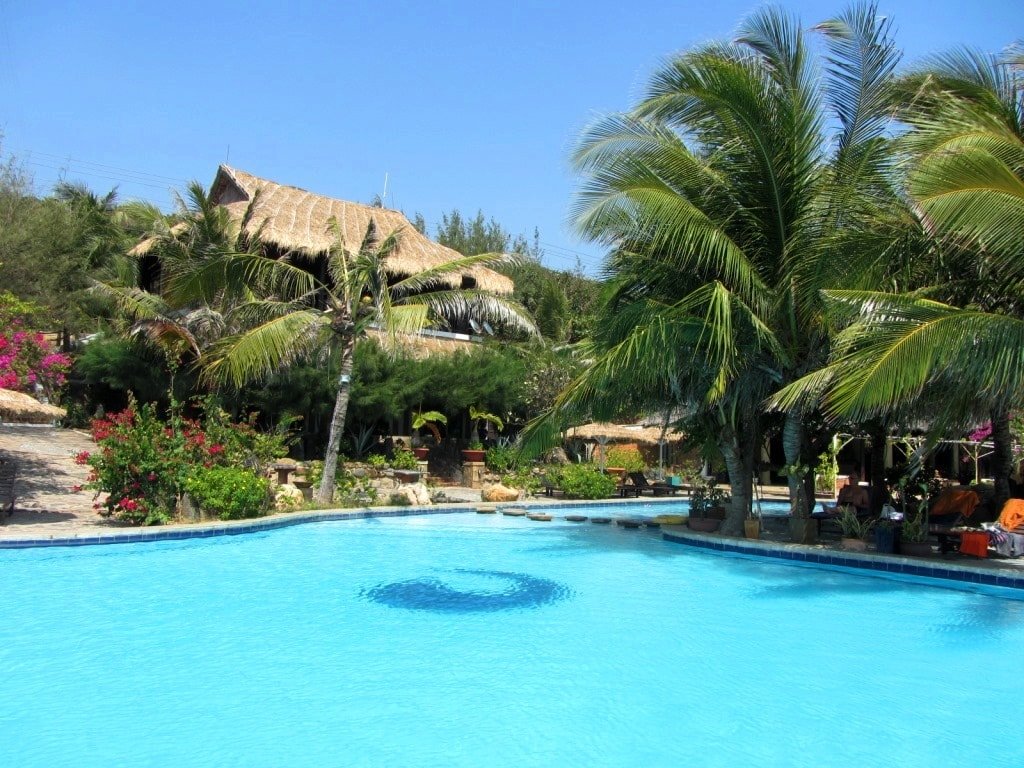 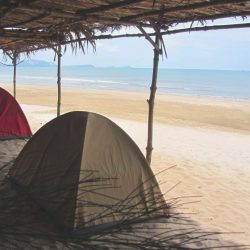 MOTORBIKE ON THE TRAIN TO MUI NE: 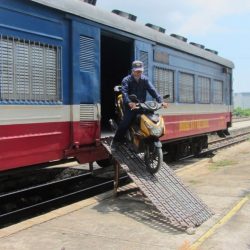 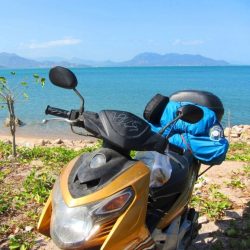