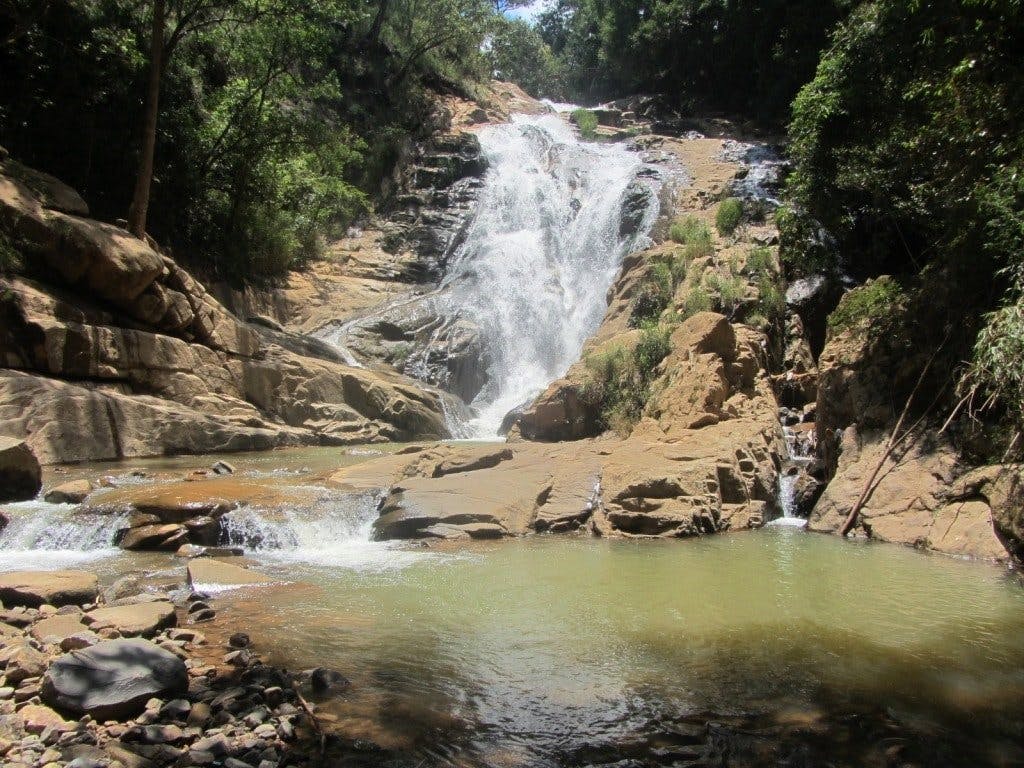 First published May 2014 | Words and photos by Vietnam Coracle

Tiger waterfall is situated deep in the pine forests surrounding Dalat. Only 15km east of the city, these falls are easily reached but feel far more remote than they really are. Like many of the waterfalls in this list, Tiger falls was developed as a tourist site some time ago, but appears to have failed to attract many visitors and is now largely deserted. There are benches, picnic huts, toilets, and even a restaurant here, but none of them look as though they see the crowds of tourists that they were presumably built to cater for. Despite its neglect, there’s still a skeleton staff here to collect the 10,000VNĐ ($0.50) admission fee before taking the steep steps down to the base of the waterfall. There are several natural platforms of smooth rock in the river on which to sit and gaze up at the falls. The cascade of white water is relatively gentle here because the water doesn’t drop vertically and crash on the rocks below; instead, there’s a diagonal slope over which the water slides and flows, finding its way to the base via several rivulets, including a distinctive lateral spur to the left, which gives Tiger falls a playful character. Because of its gentle flow and quiet setting, Tiger falls is the most peaceful of the waterfalls in this list: the kind of place where a romantic poet might come to compose a sonnet, while sitting in the dappled sunlight on a rock, dangling his feet in the cool water.

Pine trees and creepers grow up around the falls and the water is clean enough to have a refreshing dip in the rock pools. There’s some trash tangled in the roots at the high-water line, but, compared to other waterfalls this close to Dalat, it’s pretty tidy. At the top of the falls there’s a perilous rope bridge with broken wooden planks that it’s advisable steer clear of. Tiger waterfall was named after a small cave which is believed to have been a tiger den. The cave entrance is on the right before the rope bridge, but the only tigers you’ll see here are weather-beaten concrete statues. Oh, and there’s a colossal sculpture of an ethnic minority hunter presiding over the site too. To reach the falls take Highway 20 east of Dalat towards Trại Mát. Take a left after about 10km (not signposted) and follow the lane into the pine forests until it comes to an end at Tiger falls [MAP]