This post was last updated 5 years ago. Please check the comments section for possible updates, or read more on my Updates & Accuracy page. 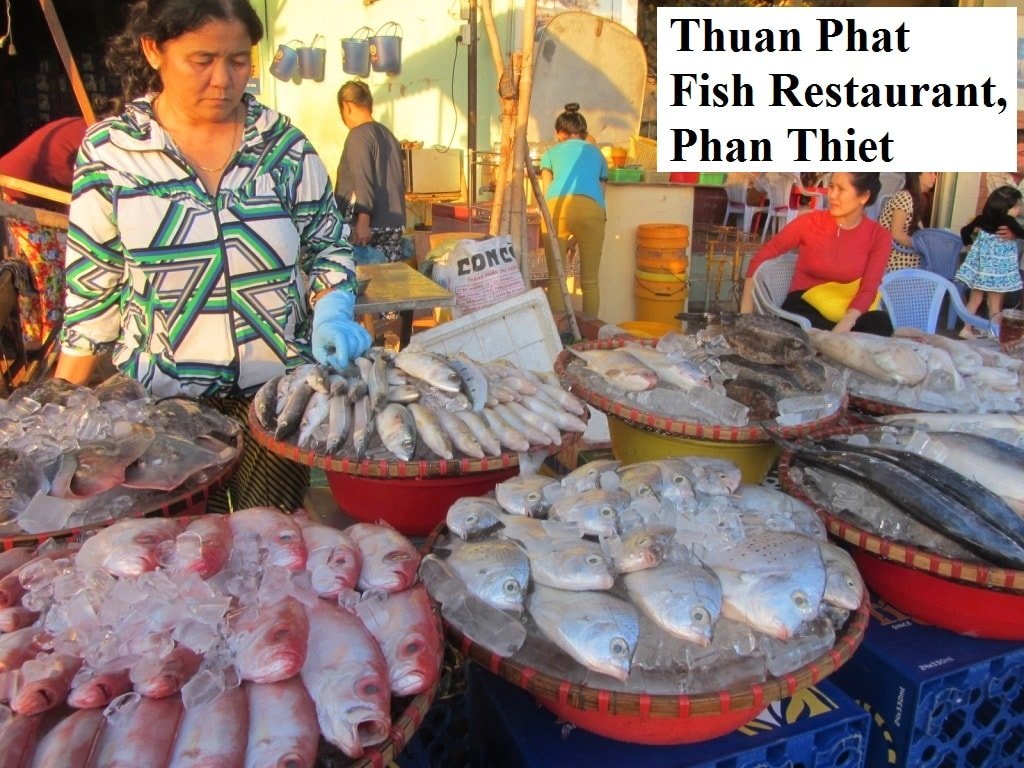 Phan Thiet’s seafood is some of the freshest & tastiest in Vietnam, especially along the riverfront road

In general, Phan Thiet is a vastly underrated coastal city, overshadowed by its popular beach neighbour several kilometres to the east, Mui Ne. Even though it has much to offer, Phan Thiet has largely been left alone by foreign travellers (although it remains popular with domestic tourists). Chief among Phan Thiet’s many charms is its food scene. More specifically, its seafood scene. Even more specifically, the string of seafood restaurants lining the bờ kè (riverfront) road, where hundreds of fishing boats lie at anchor. Take your pick from any of these establishments, but my favourite is Thuan Phat. While many foreign travellers dine on overpriced seafood (much of which is ‘changed’ to suit Western palates) in the restaurants of Mui Ne, local Vietnamese are feasting on some of the finest (and cheapest) seafood in Vietnam on the bờ kè riverfront in Phan Thiet.

The bờ kè riverfront road in Phan Thiet is actually called Pham Van Dong Street. It follows the north bank of the Ca Ty River, just before it flows into the East Sea. The river divides Phan Thiet in half: indeed, the colonial French extended this natural division into a social one, with the French living on one side of the river, and the Vietnamese on the other (you can still see the red-tiled rooftops of old French villas poking up around Phan Thiet today). This part of the river provides a calm natural harbour for Phan Thiet’s impressive fleet of wooden fishing vessels to moor during the daytime. But, at night, the boats leave the safety of the river for the open sea, where they spend the night working to bring home a seafood bounty, much of which finds its way to the restaurants lining the bờ kè riverfront road. 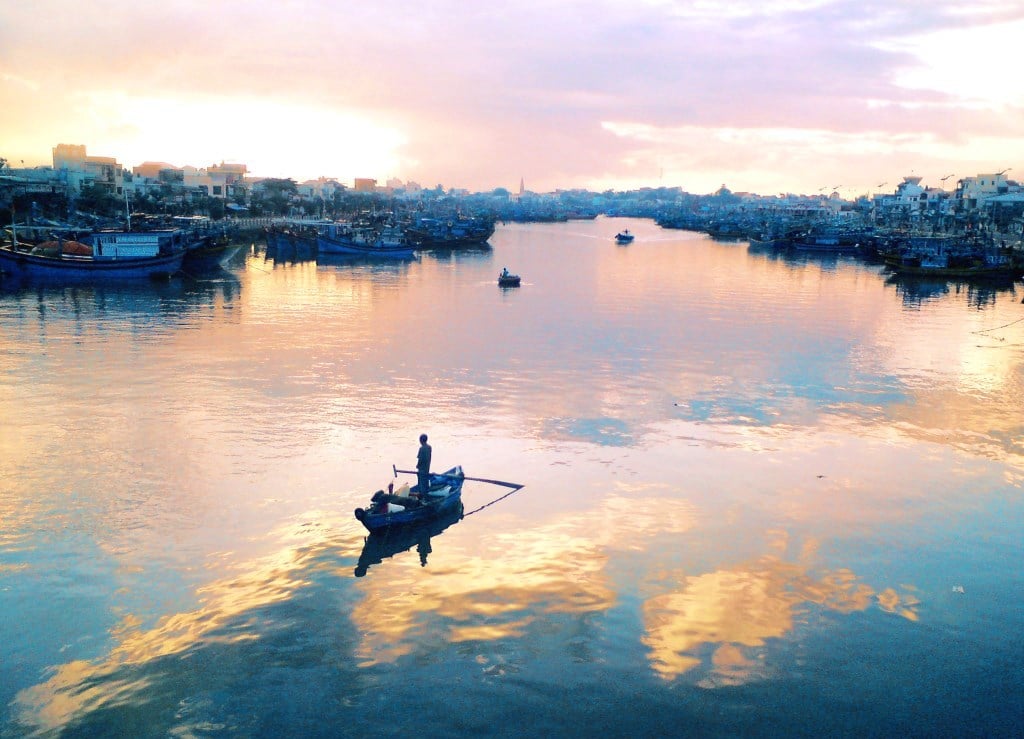 Dawn on the Ca Ty River in Phan Thiet, which shelters the city’s impressive fleet of wooden fishing boats

Sleepy during the heat of the day, the bờ kè comes alive at night, when the cool evening air invites promenading along the riverfront, and dozens of seafood restaurants open their doors for business. No matter what day of the week it is, these restaurants are always teeming with locals and Vietnamese visitors from other provinces. The atmosphere – busy, noisy, informal, jovial, sometimes chaotic, sometimes raucous, but always good-natured – is typical of Vietnamese dining. You could choose from any of the eating establishments here and have a memorable meal but, having sampled many of them over several years, I’ve finally settled on Thuan Phat as my favourite. 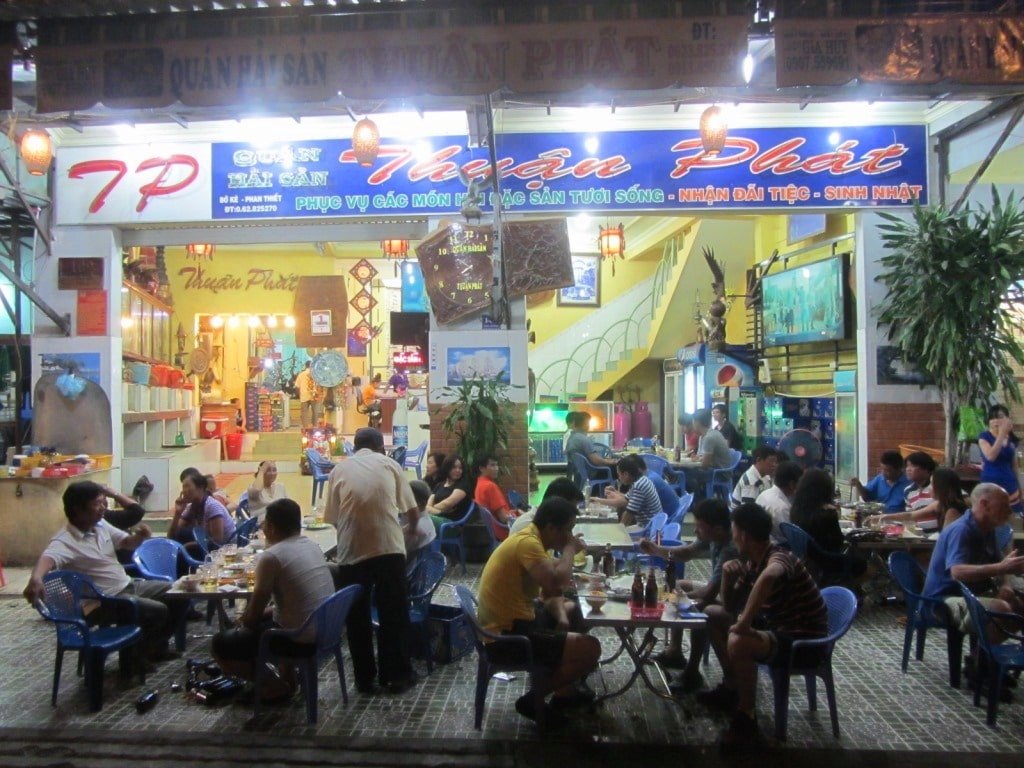 Of all the dozens of seafood restaurants along the riverfront in Phan Thiet, Thuan Phat is my favourite

Located roughly in the centre of all the restaurants along the waterfront, Thuan Phat is a bustling indoor-outdoor eatery with low metallic tables and blue plastic chairs set on the pavement, as well as an upstairs dining area looking over the fishing boats. It’s packed most nights with families, couples, groups of men on a night out, and the odd traveller. It’s a good idea to get here reasonably early, before it gets too crowded and while all the seafood is still nice and fresh (and, in many cases, still alive). Just after dusk (6.30-7.00pm) is about right. 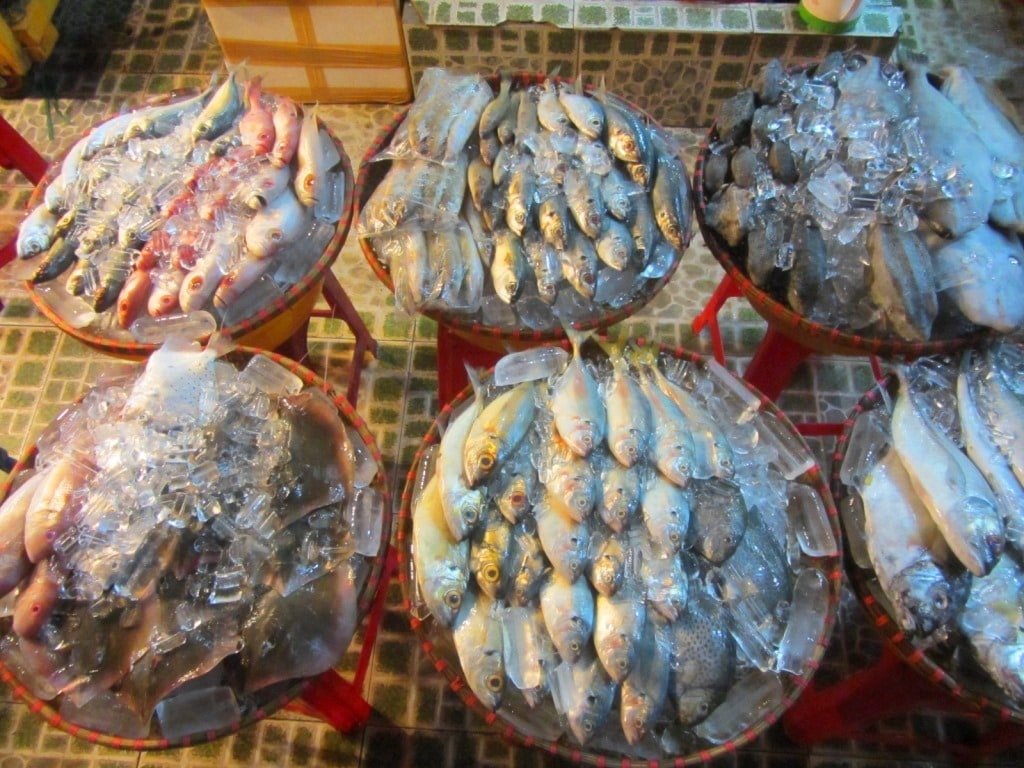 Try to get to the restaurant relatively early (6.30-7.00pm) while the seafood is still fresh and colourful

The day’s catch is proudly presented in a little kiosk on the pavement to the left of the restaurant. Fish of all colours, shapes and sizes are arranged on mounds of ice, glistening under the streetlights and illuminated signage. Dozens of varieties of live shellfish and crustaceans scuttle around in large yellow plastic buckets full of water. Inside, big water tanks hold healthy supplies of shrimp, langoustine, crab, eel, and over-sized fish and shellfish. These displays are, essentially, the menu: point to whatever takes your fancy, and a few minutes later it’ll arrive on your table. There’s also a printed menu in Vietnamese with decent English translations for some of the items. However, if you find yourself overwhelmed by the variety of seafood and general busyness of the restaurant, just take a look at what other diners are eating and communicate to the staff that you’d like exactly what they’ve got. 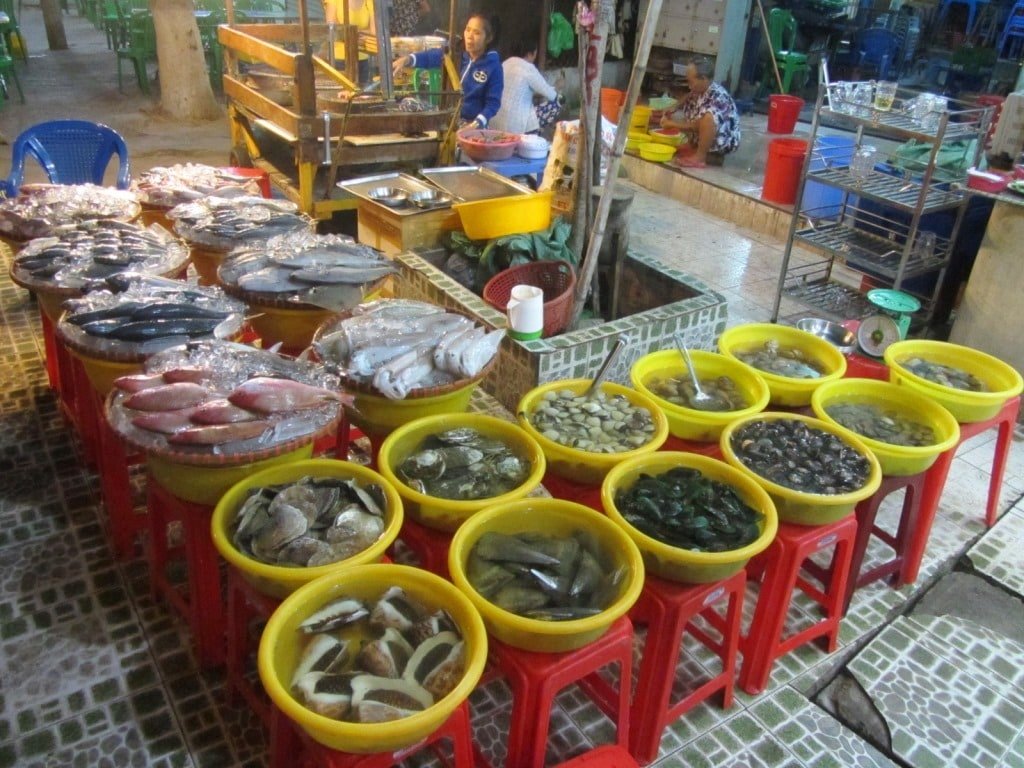 Take your pick from dozens of fresh fish, shellfish and crustaceans displayed in front of the restaurant

Some of my favourite things to order are: green mussels steamed with lemongrass (dồm xanh hấp sả), grilled scallops with spring onions and peanuts (sò điệp nướng mỡ hành), grilled oysters with cheese (hào nướng phô mai), giant clams grilled with garlic (sò mai nướng tỏi), barbecued shrimp with chilli and salt (tôm nướng muối ớt), and crispy-fried local fish (cá đục chiên giòn). The list in endless, really – you could spend weeks eating here and still not exhaust the menu. (For more details about decoding a Vietnamese seafood menu and how to order, read this.) Prices are very reasonable, especially considering the quality, quantity, and freshness of the seafood. Staff are pretty good, but occasionally I’ve had some very gruff service. Later in the evening, things liven up as travelling karaoke troupes set up in the middle of the road and blast out their versions of popular songs. The last few times I’ve visited Thuan Phat, I’ve been presented with a bill averaging around 500,000vnd ($22) for what amounts to an all-you-can-eat seafood feast for 3-4 people, including beer. 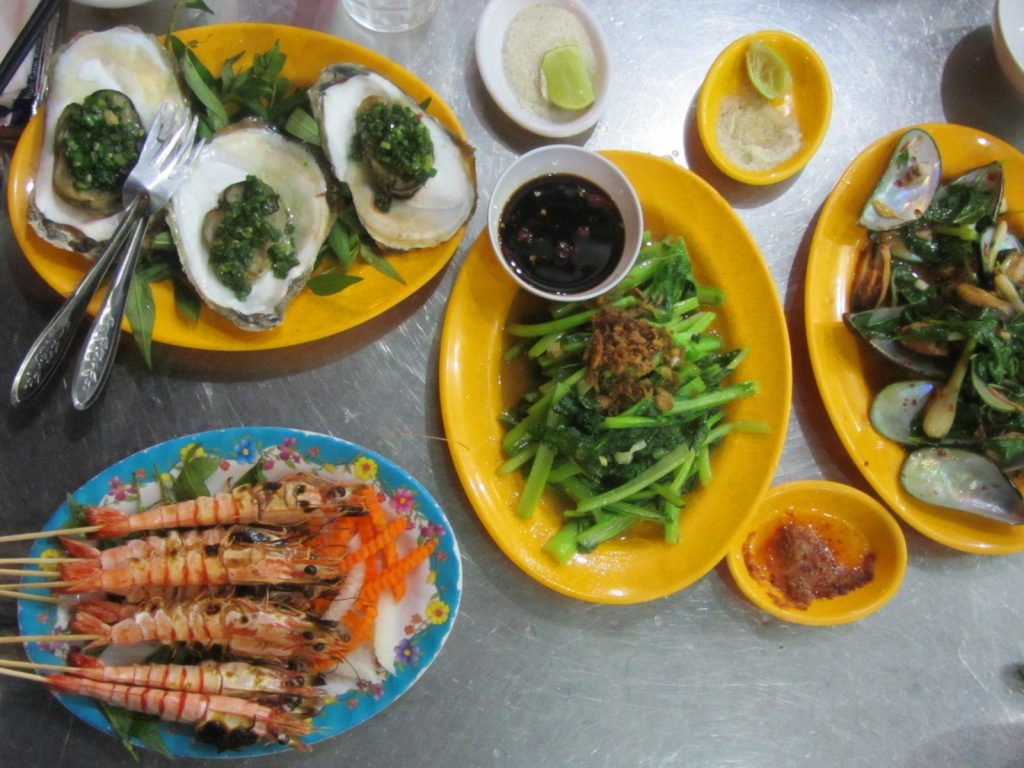