This post was last updated 9 years ago. Please check the comments section for possible updates, or read more on my Updates & Accuracy page.

Each morning for the last couple of months, I’ve opened my front gate in Saigon to greet the new day only to find a fresh mound of rat droppings on my doorstep. By way of ‘revenge’ I decided to pay a visit to one of Saigon’s rat meat restaurants. 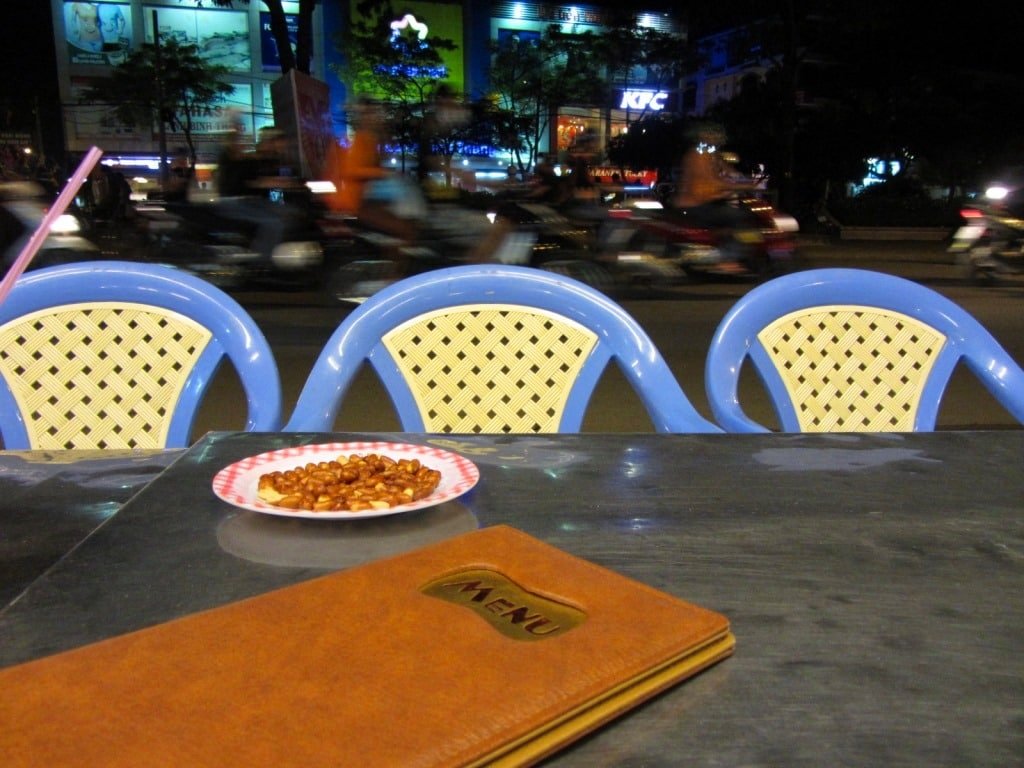 Rat is on the menu in some Saigon restaurants, and I wanted my revenge over the rodents

The rats on the menus here are not the huge, overfed city rats you see darting across the alleyways in Saigon, but small, rice-field rats (chuột đồng). Rather than feeding on piles of rubbish on Saigon’s sidewalks, these small rats eat rice and other crops in the countryside. Unsurprisingly, given their diet, these rats are found mostly in the Mekong Delta, the rice basket of Vietnam, in the south of the country. To protect their crops from these pests, Mekong farmers have been hunting rice-field rats for many years. In Vietnam, as in any great food culture, nothing goes to waste, so farmers – who were often poor – started to cook these rats to provide a much needed source of protein for their families. In time, local people started to acquire a taste for rat meat and, as hunting techniques became more sophisticated, farmers could sell their surplus at the market. Today, domestic supply can’t keep up with demand, and a thriving cross-border rat trade with Cambodia has started in order to satisfy Vietnamese appetite for the meat. 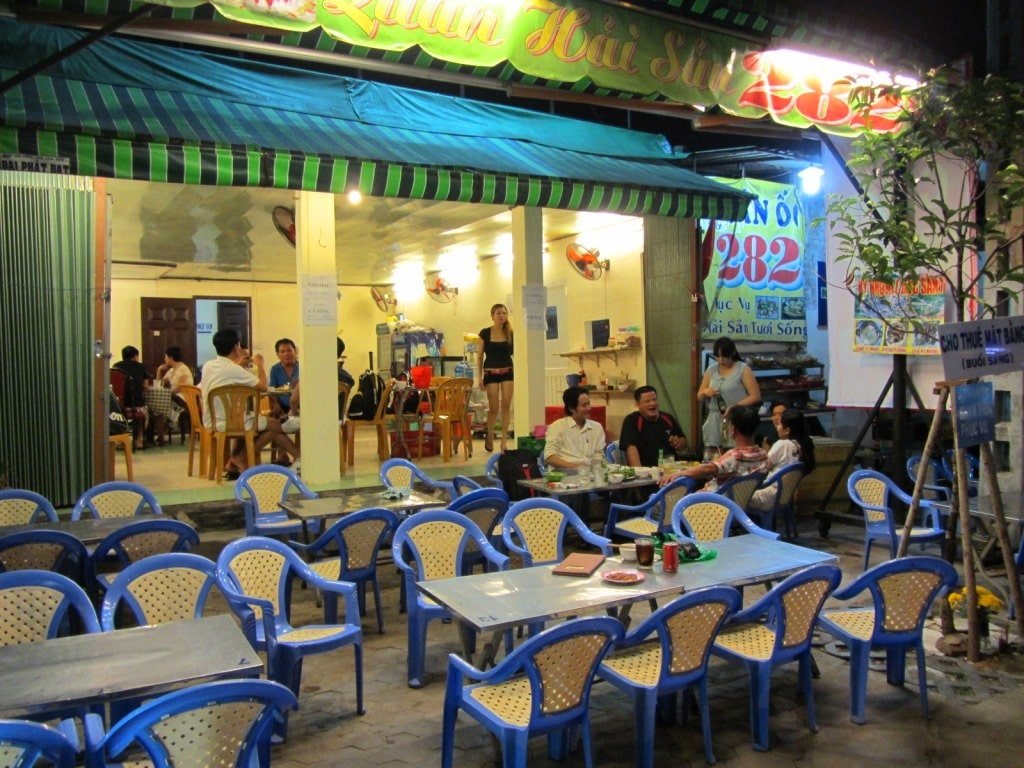 After living in Vietnam for years, I’ve learned to trust the Vietnamese palate: no matter how strange the food might sound, if it’s genuinely popular it’s almost invariably delicious. With this in mind, I headed to Như Ý Restaurant in Saigon’s District 11. From the outside the restaurant is unremarkable; just one of the thousands of indoor-outdoor eateries with small plastic tables and chairs, and fluorescent signs outside, that jostle for street-front space all over the city. What distinguishes these places from each another is the quality of the food and what’s on the menu. At Như Ý it’s not only rat meat that makes it stand out from other restaurants: there’s snake, sea urchin, lizard, and other reptiles of which I don’t know the English name. 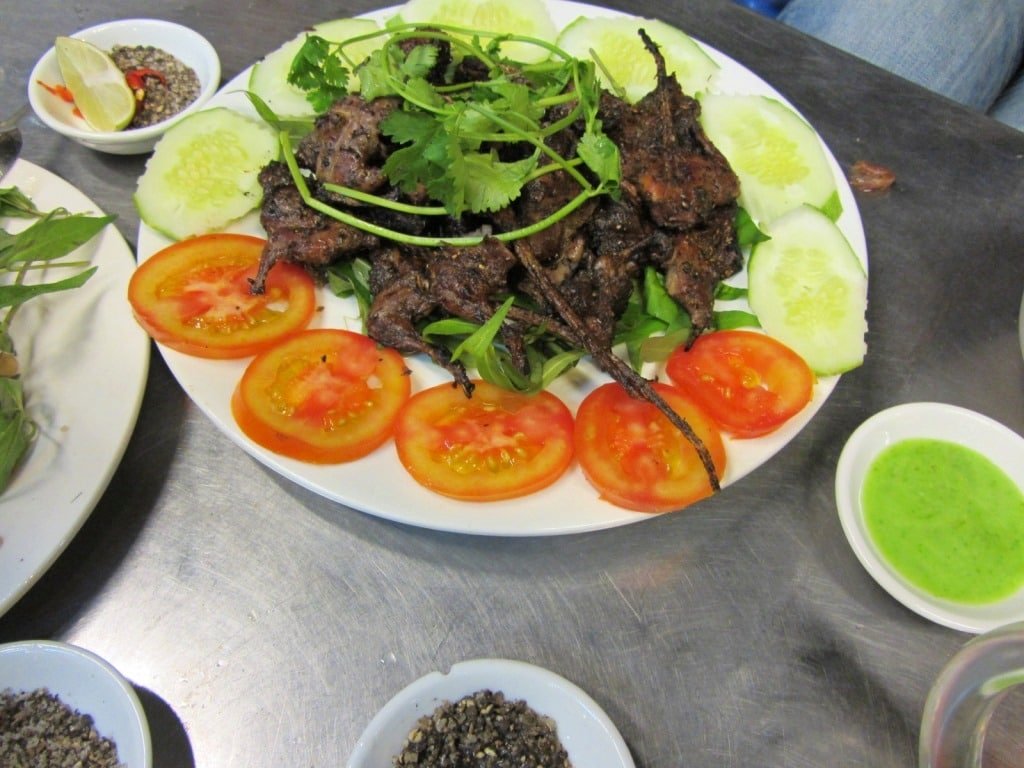 A rat meat feast in Saigon: colourful, crisp, and full of flavour and texture

My rat-eating friends and I tried most of the above items, but rat was our main focus. Of the four rat dishes on the menu, we had three of them: grilled rat with lemongrass and chilli, stewed rat in coconut juice, and rat curry with coconut milk and spices. These are all classic Vietnamese ways to cook meat, so it was no surprise that all the dishes were tasty, spicy, and full of flavour. The real surprise was that rat meat has its own unique flavour. Often, when people try ‘unusual’ meats they compare them to more commonly eaten meats; dog is often compared to chicken, or crocodile to pork. But rat has its own place in the ‘meat flavour spectrum’. If I had to compare rat to another meat it would be game: rabbit, guinea fowl, and even venison come close. The meat is dense and rich, almost sweet. There are lots of little bones that you have to chew around to get at the meat, much like rabbit. The meat is white, very tender and moist. 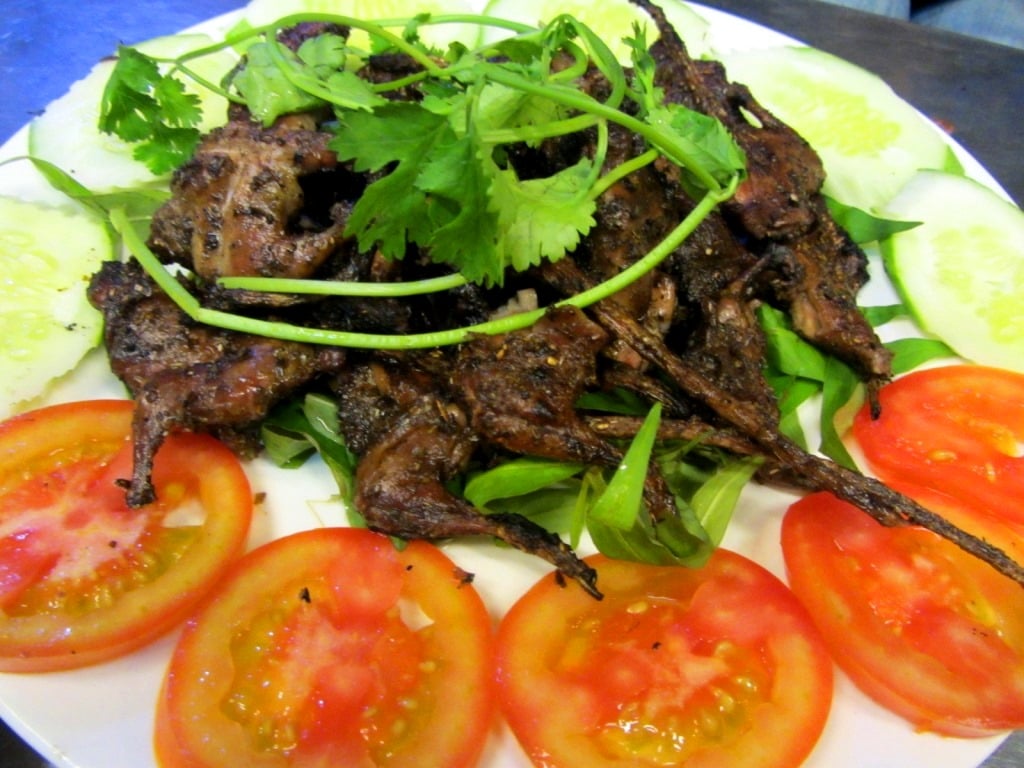 Rat meat has a distinctive flavour all its own: gamey, rich and moist. It’s good!

The rats themselves aren’t much longer that 10cm. They are roughly chopped into quarters so that they’re almost unrecognizable as rats….if it wasn’t for the long tail attached to the hind legs. At first this was a bit too ‘real’ for us, but slowly we began to realize that this ‘cut’ was by far the tastiest. Indeed, the tail itself, once chargrilled until crispy, makes a delicious, crunchy snack on its own: we decided a packet of grilled rat tails would be preferable to popcorn as a snack to munch on while watching the latest blockbuster in a movie theatre: “Would you like your rat tails salty or sweet?”

Unfortunately, despite my revenge-fueled rat feast, when I opened my front gate next morning to greet the new day, there were yet more rat droppings on my doorstep.