Lunar New Year is a time of gathering: of family and friends; of people and parties. But the Lunar New Year holiday (Tết) in Vietnam is also a time of noise and crowds; of pollution and overcharging. As much as I enjoy the former (not to mention the fabulous food), I’ve grown weary of the latter. This Lunar New Year (February 2018), I undertook to spend my Tết holiday in relative peace and solitude. I took my motorbike, my tent, and my guitar and set off for a week. Fortunately, I have friends in some of the corners of south-central Vietnam that I travelled through, and was lucky enough to visit them along the way, so my Tết was not entirely ‘people-less’. What follows isn’t a guide or a travelogue: it’s simply an illustrated scrapbook of some of the places I saw and stayed: a snapshot of an alternative Lunar New Year holiday spent on the road and under the sky. 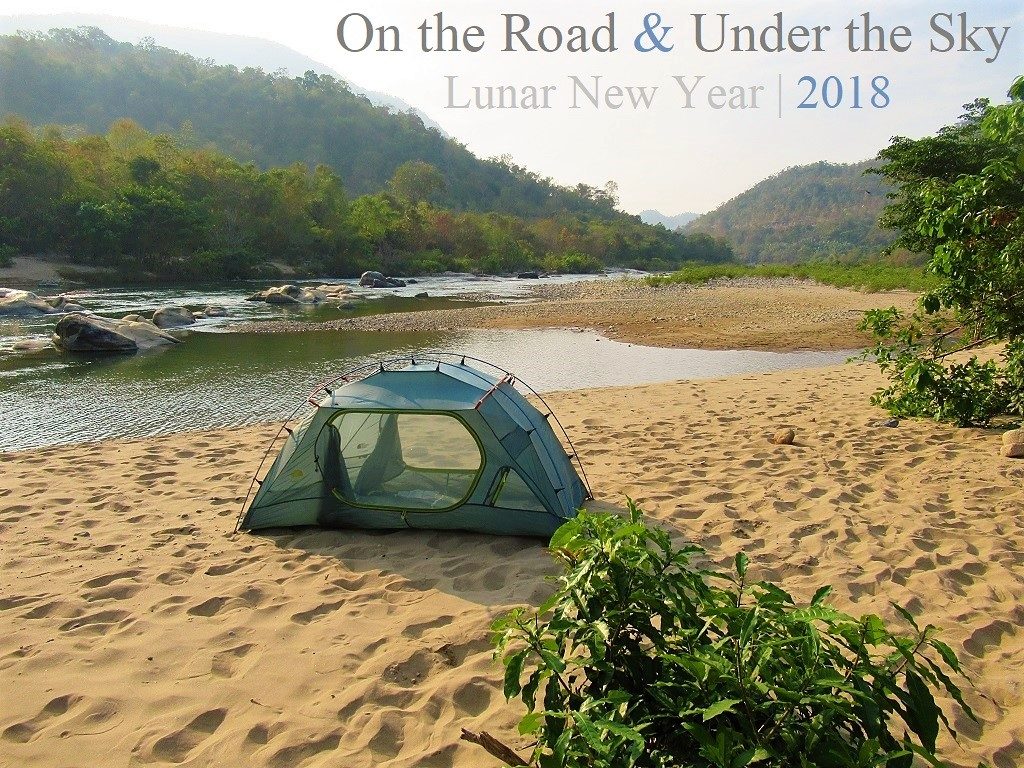 During the Tet Lunar New Year holiday, 2018, I tried to get away from the crowds on a camping road trip

I spent my time riding around the south-central triangle: the coast and the mountains between Saigon, Nha Trang, Dalat and Gia Nghia. This is a region of Vietnam I know well: I’ve probably explored this area more than any other part of the country since I arrived in 2005. I started along the coast roads, wanting to enjoy the seaside, in the glorious dry season weather, before the rush of domestic tourists after New Year’s Day (February 16, 2018). Then I headed inland, to the mountains, to get away from the holiday crowds, and to ride some quieter roads and find good wild camping in the cool highland climate. The road trip was just under 2,000km and lasted 11 days. The map below isn’t a route map: it shows places I camped and passed through while on the road. (For more specific details and guides to these areas, see Related Posts.)

Some of the places I camped & passed through during Tết 2018

Arriving on a sunny afternoon in Nha Trang, with the city filled with yellow flowers for Tết, I sat down for a bowl of bún ốc – snail noodle soup with bamboo shoots. This was my last stop on the coast before I turned westwards, into the mountains. 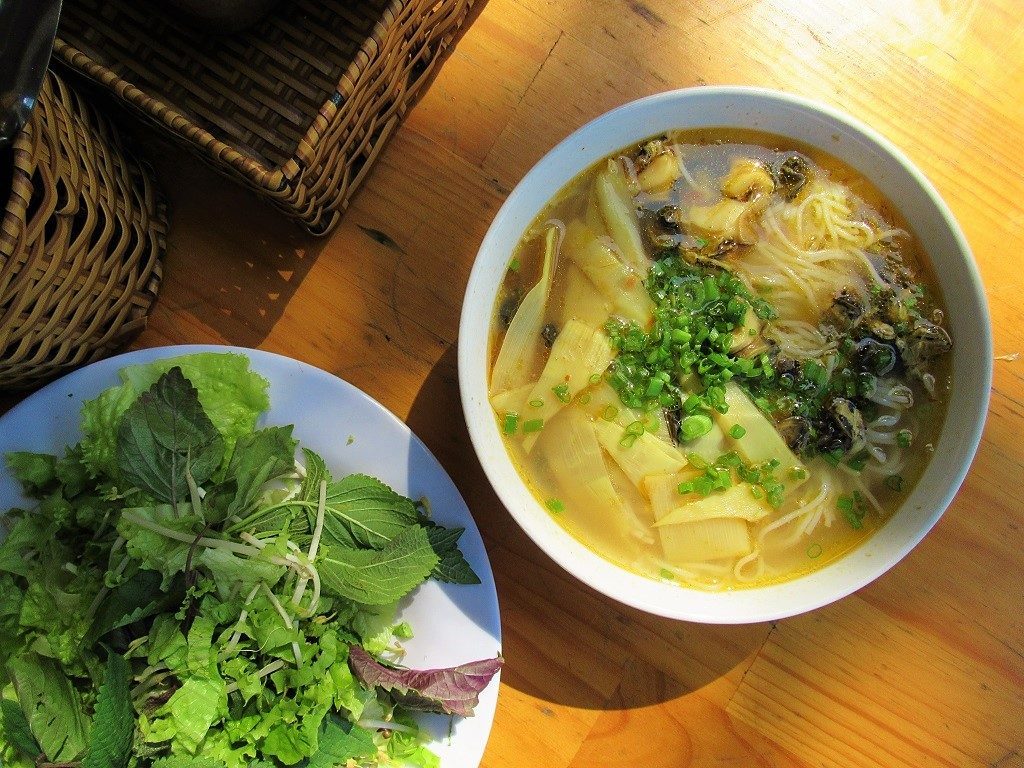 A bowl of bún ốc (snail noodle soup) in Nha Trang, my last stop along the coast before heading inland

The days are hot and dry, but the nights are cool in Ninh Thuan Province during this time of year: perfect camping conditions. Sleeping in the open is so much easier during the dry season, and camping next to fresh water is always a treat, especially when it’s deep enough to swim. 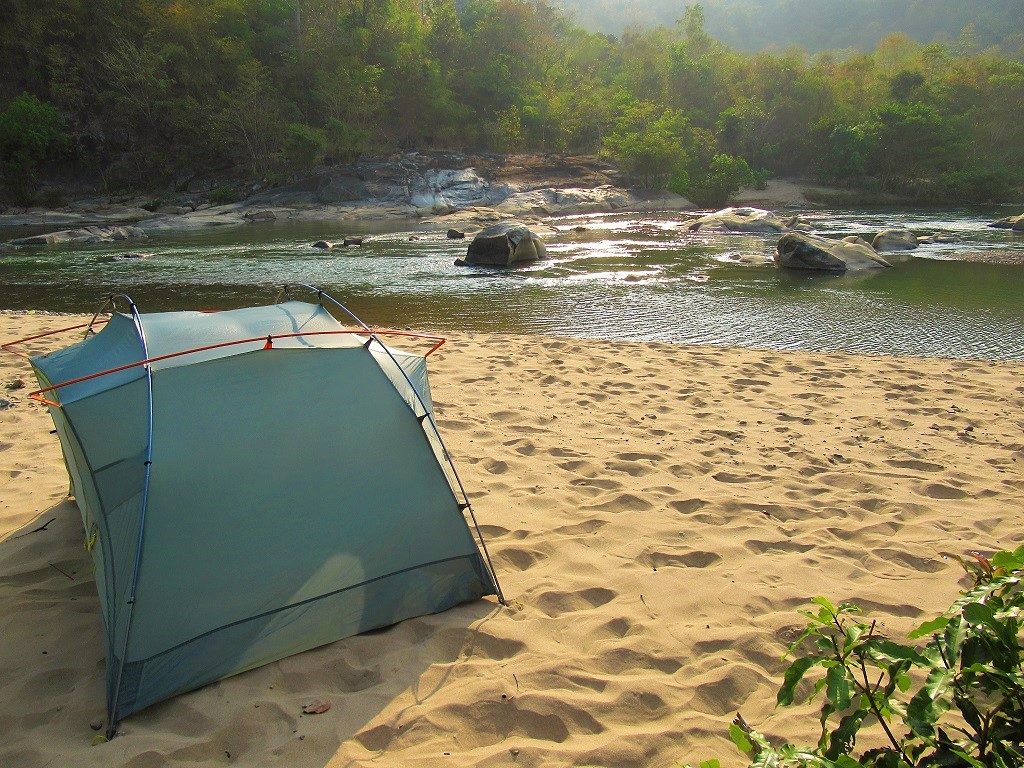 Camping is easy in southern Vietnam’s dry season (November-April), especially next to a clear river

Passing through Dalat, I stopped to buy some rượu sim (rose myrtle-infused rice liquor) from a family-run farm-restaurant in the pine forests near Suối Vàng Lake. Sweet and flowery in flavour but mild in strength, rượu sim is one of my favourite tipples in the Central Highlands. Around Dalat, the pine forests were dry and the coffee blossom was in bloom, as well as other sweet-smelling flowers that you don’t find in the hotter lowland regions of Vietnam, like the fragrant sweet pea flower in the picture below (at least I think it’s sweet pea).

Sweet pea: because Dalat’s climate is so cool, flowers grow here you don’t find in the hot, lowland regions

Moving further west on good, empty roads, I realize how easily accessible the highlands are now, since the completion of big new infrastructure. Many of the roads are built to facilitate dam construction and the clearing of forest for agricultural use. The dams form huge reservoirs which in turn become local natural attractions. 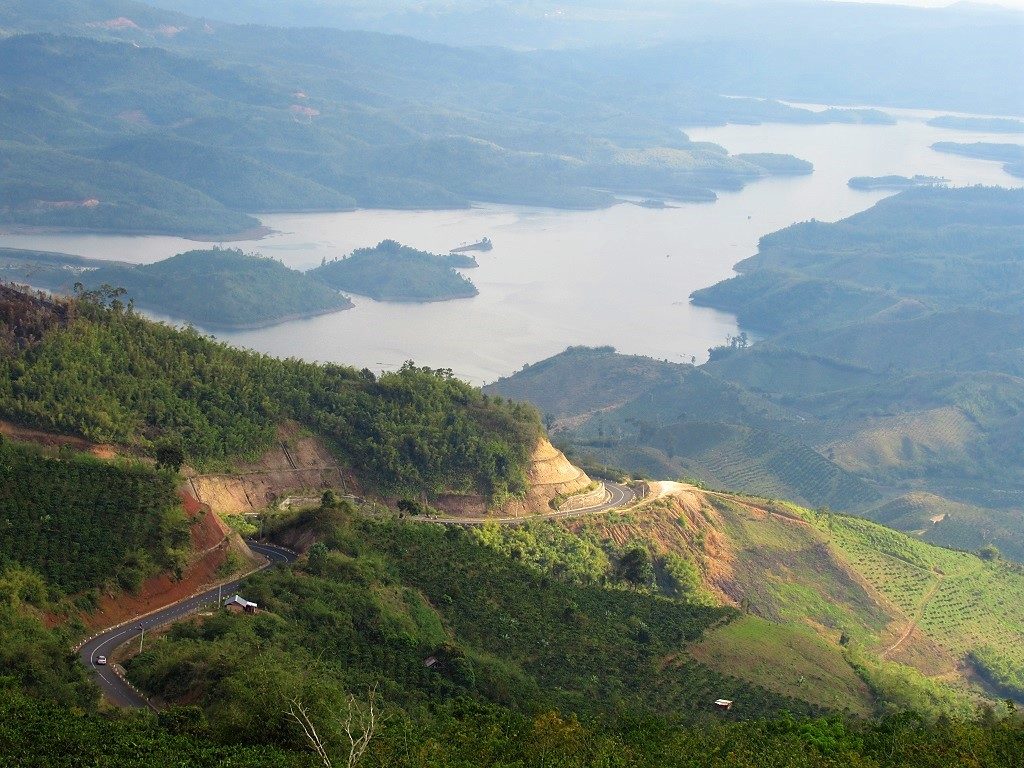 Before the mass cultivation of coffee and other cash crops, these highlands were dense forests stretching all the way to the Cambodian border. Today, there’s still large expanses of jungle left, but it’s disappearing fast as farming encroaches. 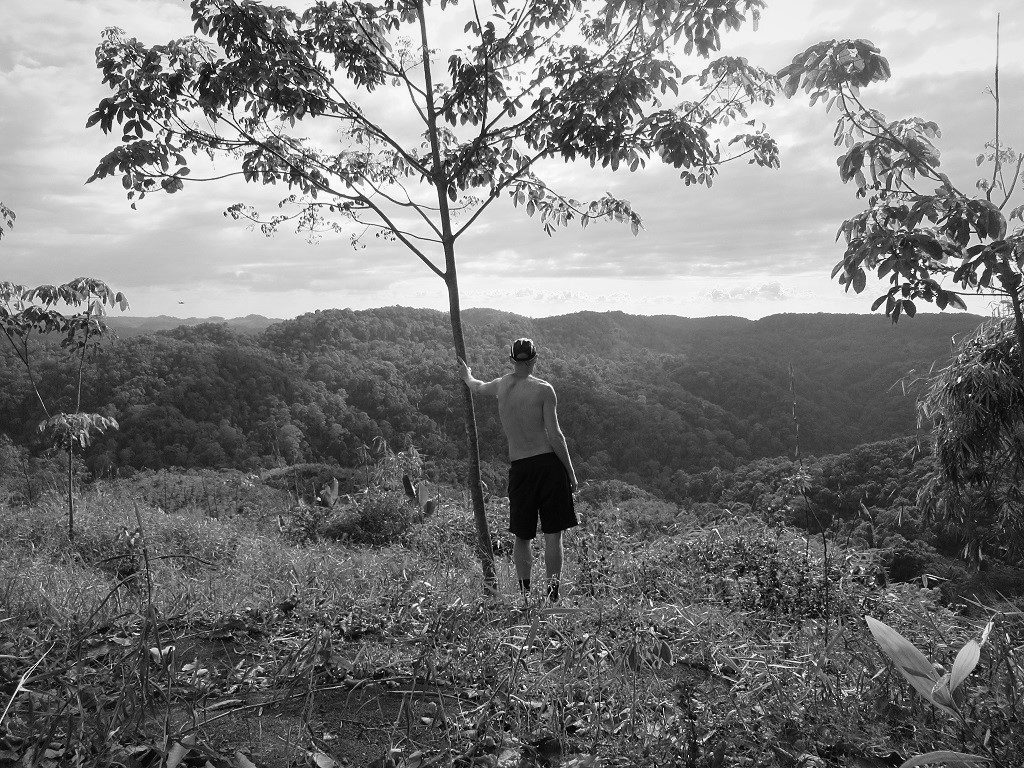 Camping on a ridge in the forests somewhere between Gia Nghia and Cat Tien, I scared myself before bed by reading about how tigers roamed the wartime bases of the Viet Minh in the Việt Bắc region (northeast Vietnam), during the Franco-Viet Minh War (1946-1954). Guard dogs were eaten by tigers at night, and, in the 1950s, travellers on the road to Dalat were warned not to get out of their vehicles for risk being mauled by prowling tigers. Today, it’s estimated there are only some 40 Indochinese tigers left in the wild in Vietnam. Tonight, that figure comforts me, but I still woke up terrified at the sound of each footfall approaching my tent. 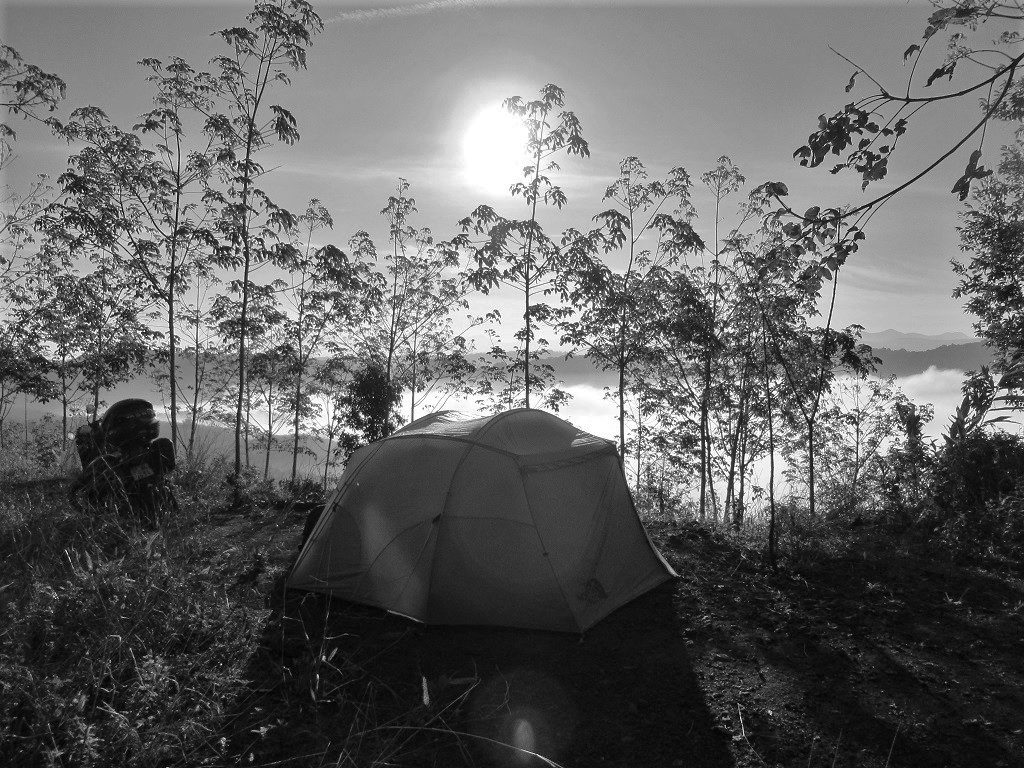 Camping on a ridge in the forests & mountains of Dak Nong Province, once home to Indochinese tigers

Early morning on the ridge is magical. A mist fills the bowl created by the encircling mountains, hanging above the forest so that only the tallest trees break the grey veil of vapour. Birdsong fills the morning air – the trees are alive with them, flitting from branch to branch so that the entire canopy shimmers and shakes. 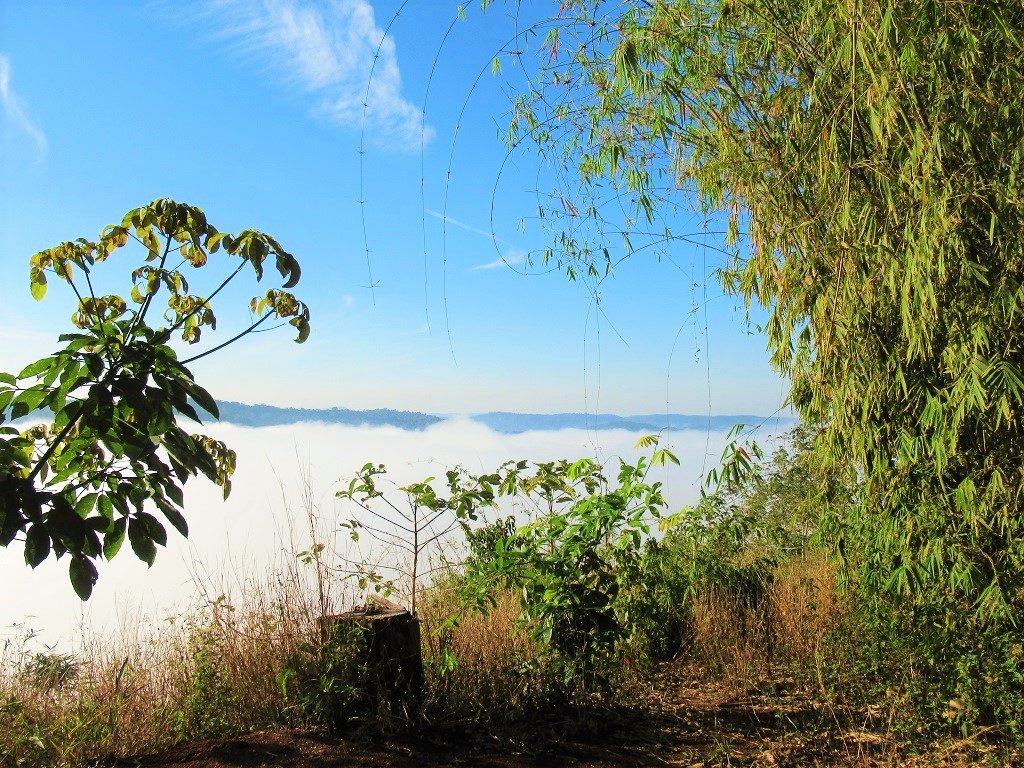 In the early mornings on the ridge, a mist fills the valley, hovering above the jungle canopy

The Dong Nai River is one of the longest in Vietnam. It’s dammed at multiple points in the highlands. I was able to bathe in it on the mornings I camped. Despite the air being cool, the water was quite warm. Once this river reaches the lowlands, near Saigon, it’s wide, muddy and polluted; but here in the mountains it’s clear. 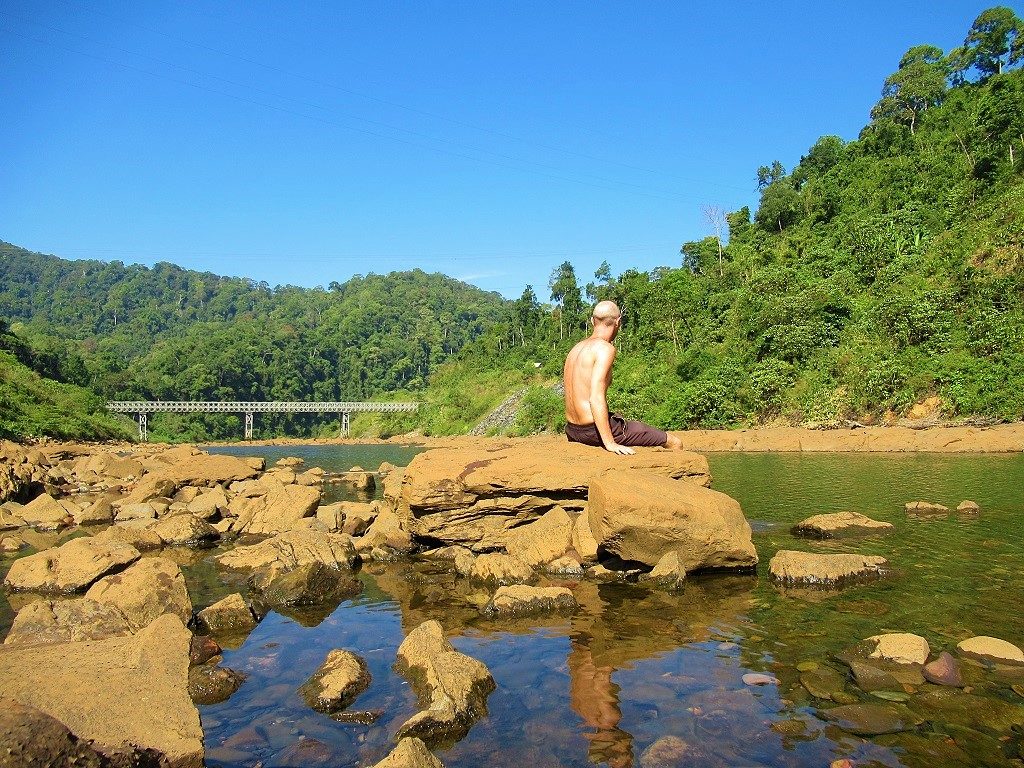 The Dong Nai River, one of the longest in Vietnam, snakes through the highlands & is good for bathing

Behind Cat Tien National Park, a small clear river runs through a tight valley populated by ethnic minority communities, who grow coffee and cashew trees – whose pungent fruit is the dominant smell in the valley – along the banks and fish in the river. This was my last night in the open, before heading back to the busier, more industrialized lowlands. 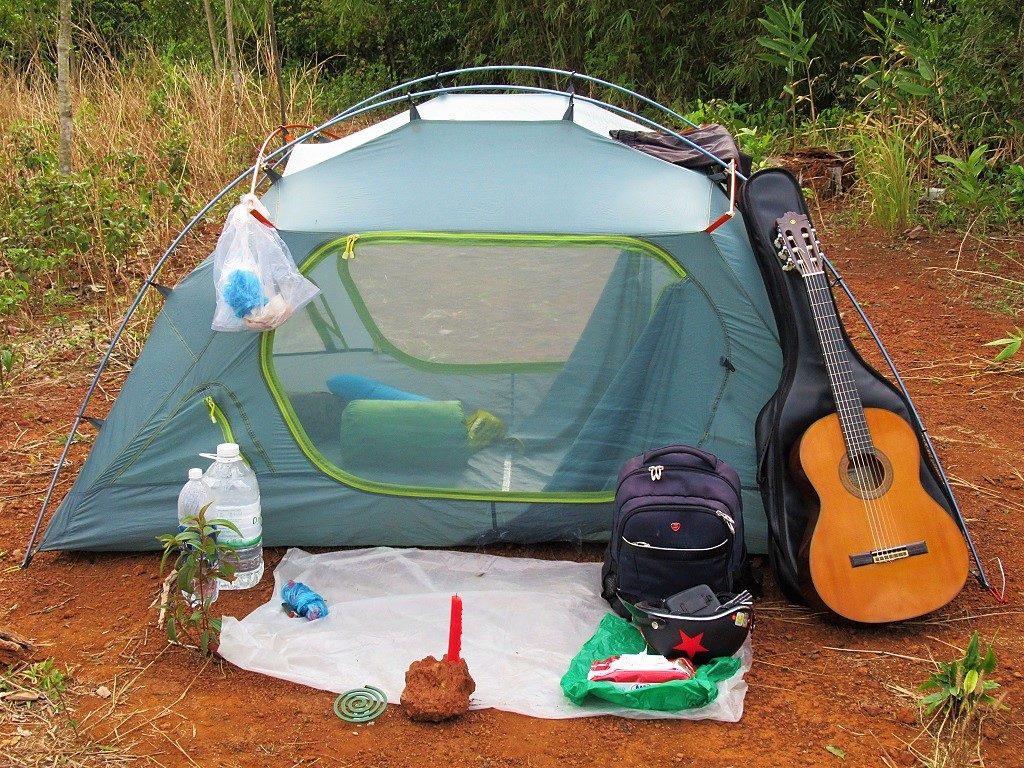 My last night in the open, near Cat Tien: camping was an effective way to avoid the holiday crowds