This post was last updated 8 years ago. Please check the comments section for possible updates, or read more on my Updates & Accuracy page.

In the rugged mountains of northwestern Vietnam, the town of Bắc Hà holds a big, bright and busy market every Sunday. Attracting hundreds of colourfully dressed ethnic minorities from the surrounding countryside, this market is not only a draw for locals, it’s a big hit with foreign and domestic tourists too. On the one hand, Bắc Hà market is a fascinating spectacle: a superb example of a traditional minority market in Vietnam’s wild northern mountains. On the other hand, it’s a tourist circus, where minority peoples are often treated like performing animals, and much of the financial profit finds its way into the hands of the majority ‘Kinh’ Vietnamese, not the minorities. It can be a confusing and, sometimes, unsettling experience. One thing’s for certain: the increasing number of tourists is changing Bắc Hà Sunday market. It remains to be seen whether this will be for better or for worse. 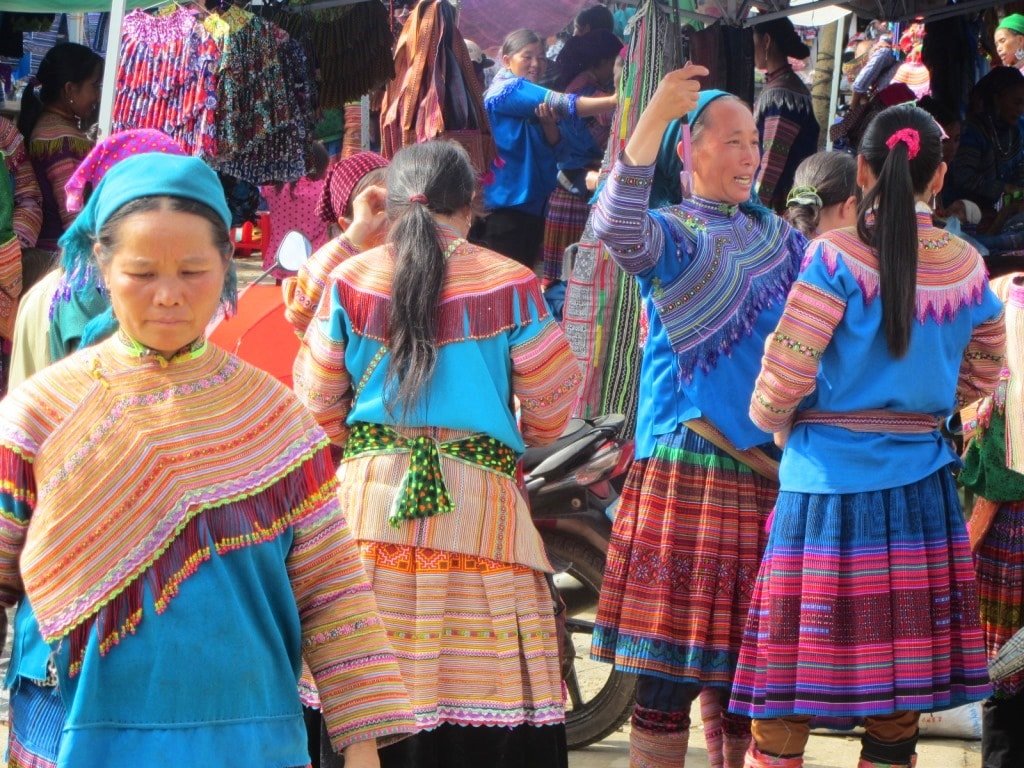 Early mornings in Bắc Hà, around 800m above sea-level, are often misty and cold. Whatever the weather conditions, the activity starts shortly after dawn at the marketplace. A two minute walk from the town square, Bắc Hà market [MAP] covers a larger area than any other minority market in Vietnam. There are thousands of people and hundreds of stalls. It’s a unique spectacle. The produce is varied, fresh and colourful. The minority women and girls look fantastic in their traditional clothing. The men are just as intriguing: drinking various local liquors, smoking local tobaccos from bamboo pipes, slurping local noodles, and exchanging local gossip. It’s impossible not to be drawn into the vortex of this lively, dazzling Sunday market. 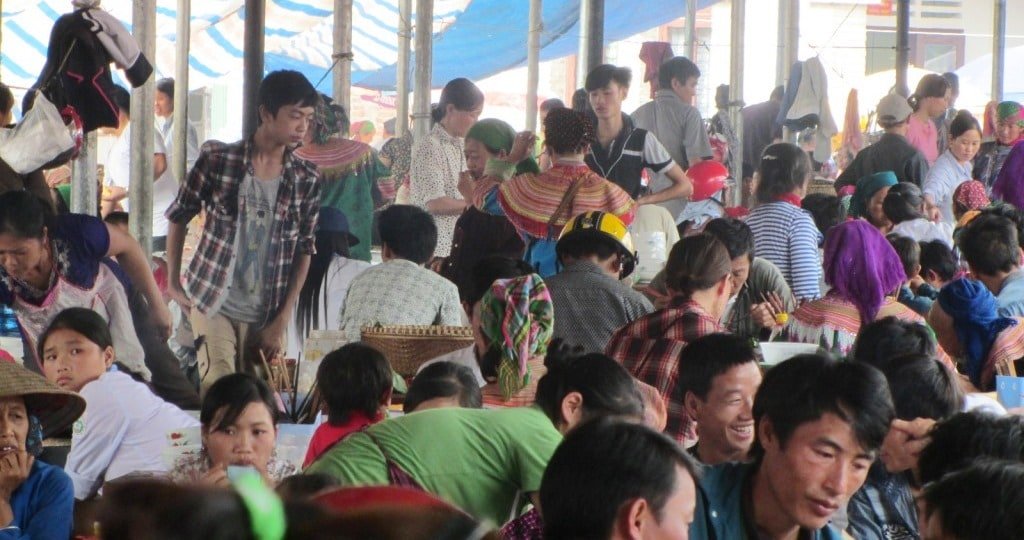 But it isn’t just a local market anymore: it’s a tourist market. Now days, trinket and garment kiosks surround the original market stalls. The products – including crockery, scarves, statuettes, and shawls – are very attractive and beautifully made. But, it’s immediately apparent that these kiosks are managed by majority ‘Kinh’ Vietnamese people, not ethnic minorities, and that their customers are tourists, not locals. 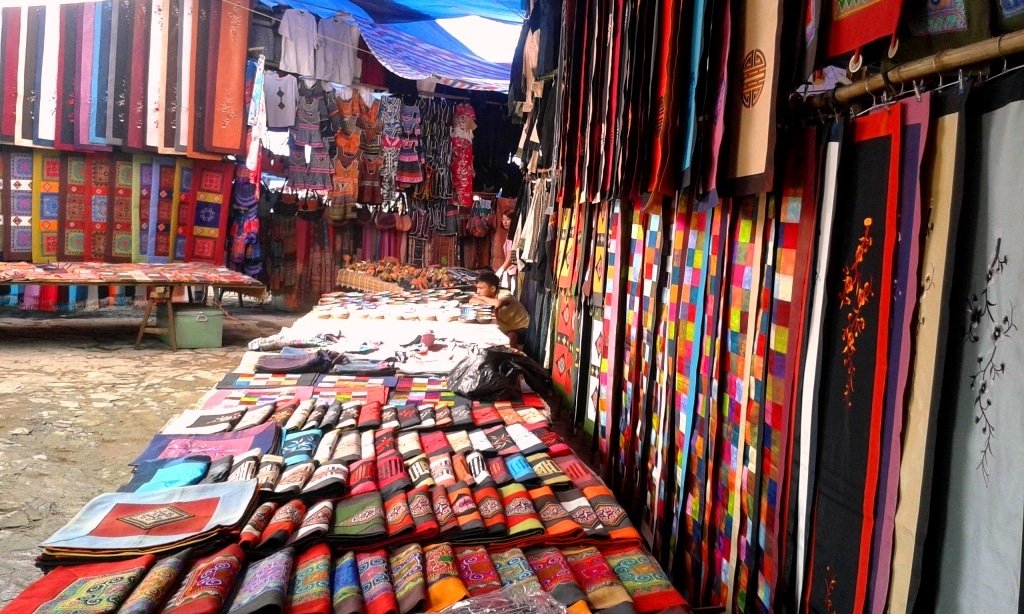 Empty until the tour groups arrive, these garments stalls are aimed at tourists not locals

Meanwhile, minority peoples buy and sell the less lucrative produce – meat, fish, vegetables, agricultural appliances, live animals (and a large amount of home-brewed rice wine). Most tourists don’t find these products as intriguing – and certainly not as attractive – as the garments and other souvenir-suitable items on sale at the Vietnamese ‘Kinh’ stalls. Thus, a large amount of the tourist buck spent at Bắc Hà market fails to make it into minority people’s pockets. So how do ethnic minorities – who are significantly poorer than Vietnamese ‘Kinh’ – benefit from the massive tourist interest in the Sunday market? 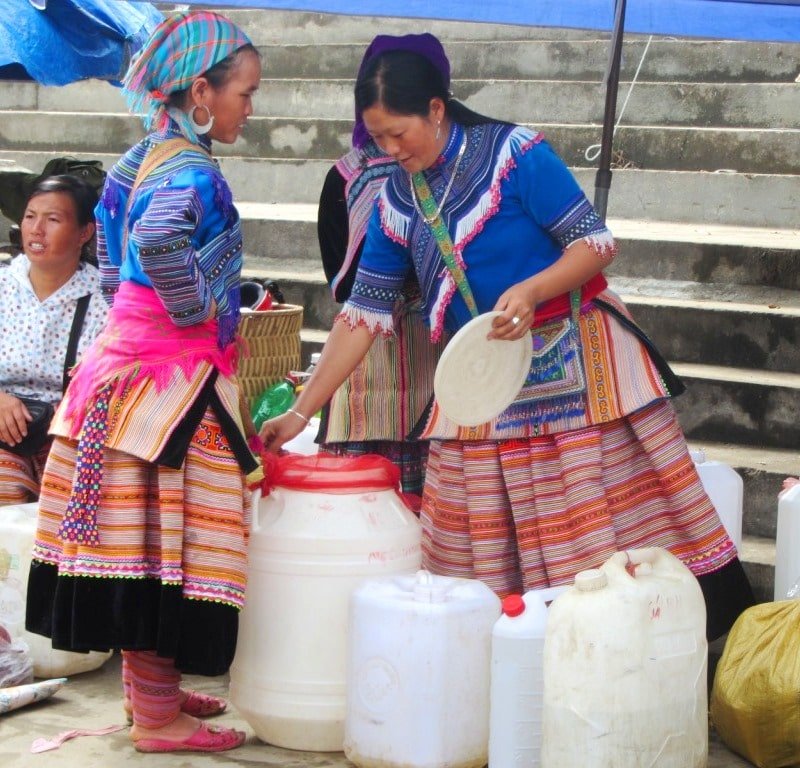 Local liquor for sale: unlikely to attract the tourist buck

Attention, whether wanted or unwanted, seems to be one answer to the above question. On my last visit to the market, a lady from the Flower Hmong, the largest minority group in the area, got angry at me when I stepped too close to her red chillies, which were laid out on the ground. It seemed a disproportionate reaction to me so I made my feelings known to her. As I moved away, another traveller came up and shoved a 10 inch camera lens right into her face, while she made a sale to another Flower Hmong woman. He made no eye contact, no attempt to communicate, not even a smile. He took his pictures and left without buying anything – what tourist is going to buy red chillies at Bac Ha market?

Close up: who needs a tripod when you can use a local’s head

After that, I began to notice the big cameras all over the market. Giant lenses pointed right up into minority peoples’ faces, as if they were no more than zoo animals, incapable of feeling self-conscious or offended or that their personal space had been intruded upon. What’s more, there was very little interaction between the photographers and their subjects: no attempt to make them feel at ease or ask if they minded having their picture taken. Perhaps, I thought to myself, there’s a lot to be angry about if you’re a minority woman selling red chillies at Bac Ha market. 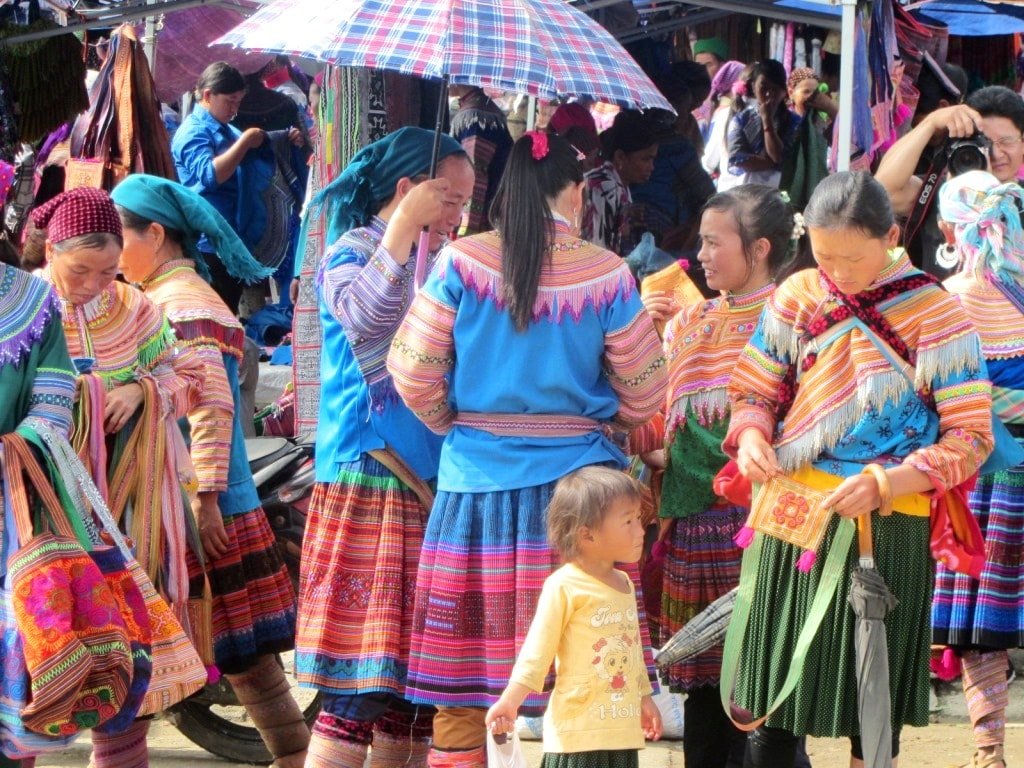 Bắc Hà Market is a photographer’s dream, but there’s a lack of respect for their subject.

By 10am, as busloads of travellers on day trips from Sapa arrive, tourists come close to outnumbering locals. The market begins to feel like a farce, a Disney market, a recreation of a traditional market: a fake market. However, you can escape the camera-wielding crowd by wandering to the meat, fish and poultry section, where most people don’t venture because the sights, sounds and smells aren’t so attractive. The hot food section is also wonderful. Even though it’s under the full gaze of dozens of camera lenses, most people stop short of sitting down at one of the wooden benches and ordering one of the steaming, hearty bowls of soup. But do this and you’ll actually be partaking in this real, live market, not just spectating. The food is excellent and cheap, and you’re likely to be invited by fellow diners to toke on their bamboo pipes and shoot back their rice liquor. 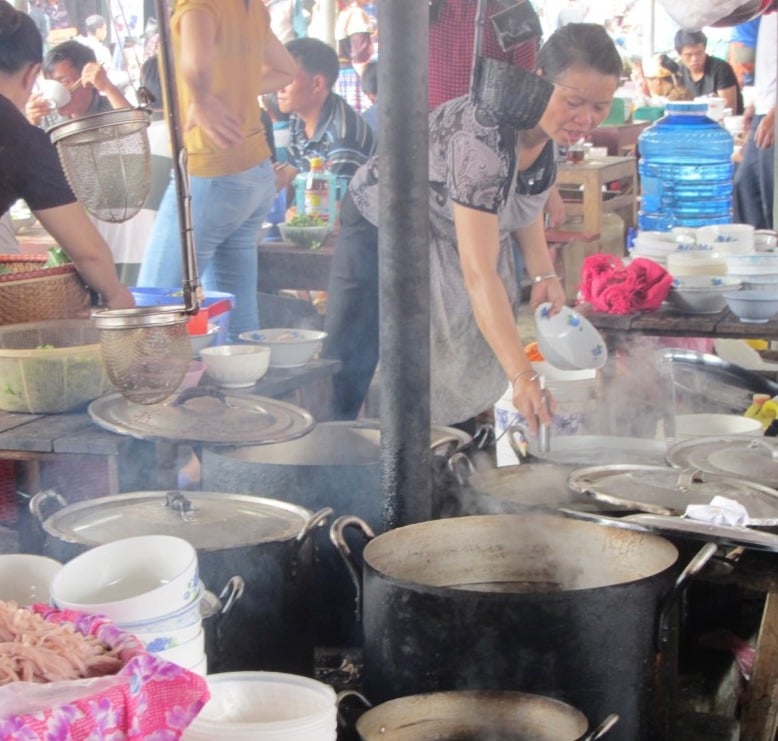 In general, I don’t feel comfortable at Bắc Hà Sunday market. I like it and loath it. After all, I am one of the hundreds of camera lenses at this market (the photos in this article are proof of that). I didn’t buy any red chillies from the minority woman I offended, and I was tempted to purchase one of the souvenir trinkets from the ‘Kinh’ stalls. Like most tourists, I don’t like to think of myself as a tourist, but Bắc Hà market reminds me that I am. It would be nice if more tour companies employed local minority people as guides around the market. This would produce a few jobs for local people and it would encourage foreigner-minority interaction through translations provided by the local guides. To see the market at its best, get here before 9am. To give something back to the market and the people who make it happen, buy some of the exotic fruit on offer, try some of the local liquor, wolf down a bowl of the local soup, and ask before taking a photo.